Samsung PS51E490 Design
As soon as you look at the 51-inch Samsung PS51E490, you can tell it’s not one of Samsung’s premium efforts. First, its design is surprisingly ‘standard’, with a fairly chunky black bezel and none of Samsung’s usual aesthetic extravagances. The bezel does, if you look carefully, have a pleasant gradation effect to its ‘charcoal black’ colour, but this is is practically invisible from a normal viewing distance.

Also giving away the Samsung PS51E490’s relatively low-rent nature (we’ve found this plasma TV selling for barely £550) is the grey tone of its screen when the TV is in standby mode. By comparison, the screen in the recently reviewed Samsung PS60E6500 (and many other plasma TVs this generation) looked much blacker when the TV was in standby. The relative greyness of the PS51E490’s screen suggests it doesn’t have particularly impressive high-contrast filtering – a fact confirmed by the discovery that the set uses ‘Real Black’ technology rather than the ‘Real Black Pro’ system on the Samsung PS60E6500. 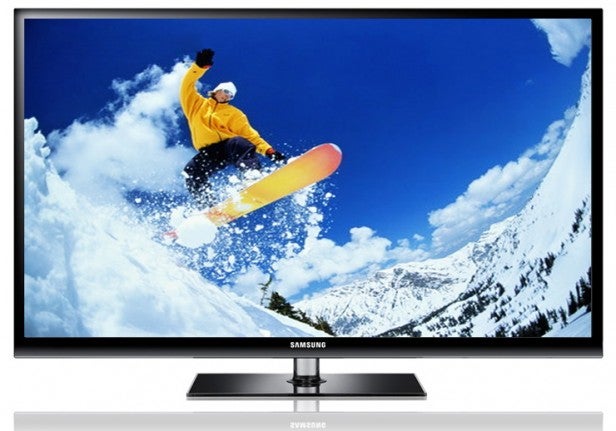 Samsung PS51E490 Features
Starting to explore the Samsung PS51E490’s features quickly uncovers another cost-cutting measure – the most severe yet. For the set doesn’t carry Samsung’s Smart TV service, with all its video streaming, health/fitness and social media apps.

Even the connections have been limited by Samsung’s push to keep the PS51E490 cheap, as it only offers two HDMI ports when we would have expected three, and just one USB port when we’d have hoped for two.

We’ve started off this review in a rather curmudgeonly fashion. But actually, it’s not our intention to knock the set – at least at this point. All we’re doing is setting the scene so that you are clear right away that if you only want to spend £550 on a 51-inch TV, you’re going to have to accept a few compromises.

Without further ado, then, let’s get into looking at what positives the Samsung PS51E490 has to offer. Perhaps the biggest surprise is its active 3D support – especially as Samsung has generously provided two pairs of its remarkably lightweight (if rather small-lensed) 3D glasses for free. 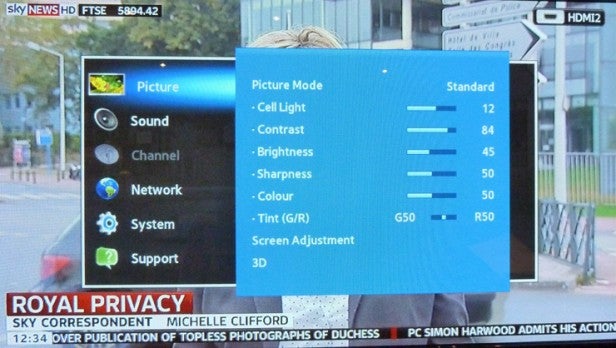 The set also enjoys a Freeview HD tuner, and despite its lack of Internet access, it does carry an onboard LAN port you can use for networking the TV to a DLNA-ready PC for streaming of multimedia content. The set doesn’t ship with integrated Wi-Fi, but you can make it wireless by coughing up a few quid more to secure one of Samsung’s USB Wi-Fi dongles.

The only area where we feel Samsung could have provided more flexibility, is with the PS51E490’s presets. There are only three in the main picture menu: Dynamic, Standard and Movie – none of which are especially helpful, thanks to the way they all push the Cell Light and contrast levels too hard. There is also, thankfully, a Game mode weirdly tucked away within the General sub-section of the System menu. But all in all, as with Samsung’s LCD TVs, the Korean manufacturer could definitely do with revisiting its current picture preset strategy.

Samsung PS51E490 Picture Quality
Kicking off our tests with some standard definition feeds from the built-in tuner, it’s quickly clear that pictures on the Samsung PS51E490 aren’t in the same league as those of the recently reviewed Samsung PS60E6500. First, They’re considerably softer and less detailed – a result, probably, of the combination of the screen’s 1024 x 768p rather than full-HD resolution, and a less able upscaling engine. Also, colours look considerably more muted, leaving pictures routinely looking rather flat. It doesn’t help standard definition colours, either, that there seems to be a constant slight orange undertone to images that no amount of toying with the colour settings entirely removes. 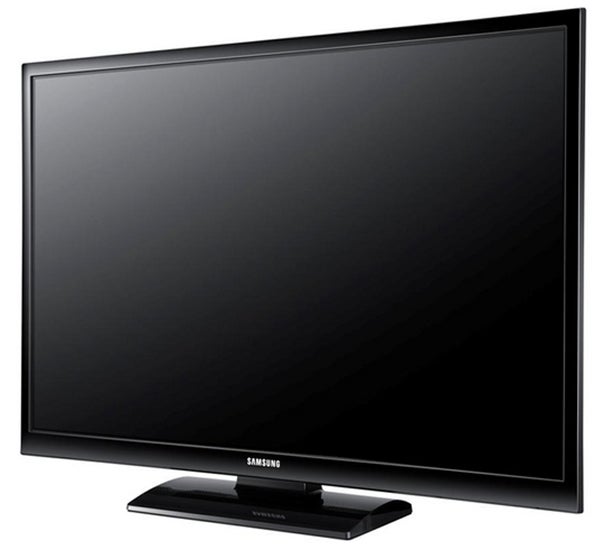 Obviously making comparisons with more expensive TVs isn’t especially helpful if your budget is limited. But all we’re trying to do is help you understand why watching standard definition on the Samsung PS51E490 isn’t a particularly enjoyable experience.

Shifting to HD broadcasts immediately introduces a fairly major improvement, however. Colours look punchier and more dynamic for a start, and the excessive softness of standard definition playback is replaced by a much crisper, more detailed look. You would, of course, expect this to happen when shifting from standard to high definition on any TV, but the shift is exceptionally pronounced on the Samsung PS51E490 thanks to the underwhelming nature of its standard definition efforts. What’s more, the Samsung PS51E490‘s motion also looks cleaner and smoother with HD, and even the image’s contrast seems to improve.

It should be stressed, though, that we’re not suggesting here that the Samsung PS51E490’s HD pictures are in any way exceptional by the standards of the TV world at large. There isn’t quite as much detail as you get with the best full HD TVs around, and colours look a little basic, in that tones don’t contain as much subtle detail blending as we would ideally like to see.

A selection of Blu-rays is up next. And again there’s an incremental improvement in the Samsung PS51E490’s performance. For instance, black levels oddly look better than with any other source – reasonably deep by the standards of flat TVs generally, yet with much more detail in shadowy areas than you would expect to see with any similarly affordable LCD TV. It’s also great to see during very dark scenes, there is no sign of the sort of backlight clouding and bleeding so common with rival LCD technology. 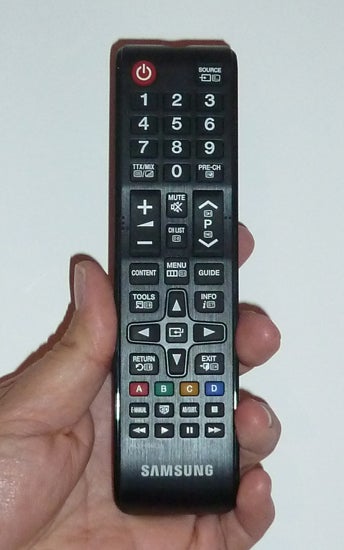 There’s more of a grey-green pall over dark scenes than you see with this year’s premier plasmas, such as the Panasonic TX-P65ST50B, but it’s not overbearing, leaving the Samsung PS51E490 as one of the strongest black level performers in the budget TV world. Blu-ray images look slightly sharper than broadcast HD ones do too, and colours are both richer and more subtly delineated.

However, while mostly enjoyable, even Blu-ray playback can’t entirely escape the Samsung PS51E490’s budget nature. For instance, although sharper than broadcast HD, there’s still not the degree of detail you see with really high quality TVs.

Also, dark Blu-ray scenes on the Samsung PS51E490 exhibit green dot noise that’s quite noticeable if you’re sat close to the screen – though thankfully this becomes less and less visible the further away from the screen you are, and isn’t often problematic from typical viewing distances. Especially if you’ve got the Cell Light setting down to 12 or less.

Motion still looks a bit jerky too, especially during camera pans, despite the panel claiming a ‘600Hz’ system via sub-field driving. On the upside, though, you seldom see any sign of the fizzing trails sometimes seen over moving objects – especially skin tones – on Panasonic’s plasmas.

Samsung PS51E490 3D
The last aspect of the Samsung PS51E490’s performance we need to check out is 3D. And in some ways the TV does very well for its money. Particularly welcome is how little crosstalk you have to tolerate. The image isn’t completely immune from the double ghosting issue during notoriously difficult sequences like the Monsters Vs Aliens Golden Gate Bridge scene or the night-time lantern release segment of Tangled. But it’s subtle even during these moments, and is seldom visible at all during the less difficult material that makes up most of your 3D viewing time. 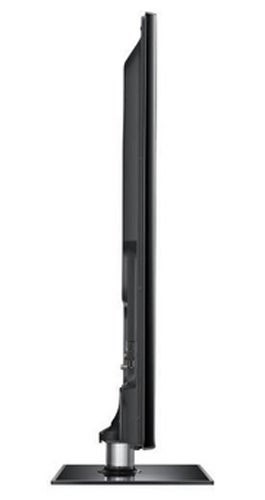 The Samsung PS51E490’s 3D performance still falls quite a bit short of that of Samsung’s E6500 plasmas, though. For instance, with the Samsung PS51E490 pushed hard to combat the dimming effect of the glasses, it’s sometimes possible to see quite a lot of plasma cell ‘fizzing’, especially during bright scenes. Motion often looks quite uncomfortable in 3D mode too, with the slight judder noted with 2D looking more pronounced once there’s depth of field to deal with.

It’s also immediately clear that there’s less detail and sharpness in the Samsung PS51E490’s 3D pictures than there was in the 3D efforts of the PS60E6500. This even extends to the occasional jagged curved edge, something we definitely didn’t see on the PS60E6500.

One final, rather odd flaw with the Samsung PS51E490’s 3D pictures is that the unit’s colours sometimes look bleached out, especially in the brightest parts of the picture.

As a gaming monitor, the Samsung PS51E490 is solid. Its difficulties with motion are problematic with games involving a lot of panning round, but its impressive black levels/shadow detailing both serve it well, and our tests for input lag revealed an impressively low figure of around 34ms. This shouldn’t be enough of a delay to seriously impact your ‘twitch-gaming’ skills. 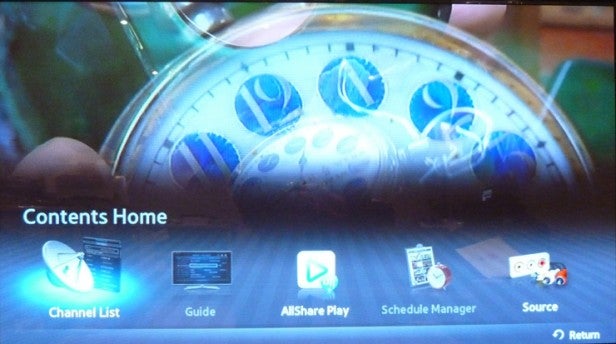 The Samsung PS51E490’s relative bulk versus Samsung’s LED models serves it quite well when it comes to sound quality. There’s a noticeably richer, more open mid-range than you get with the brand’s ultra-slim models, with more bass underpinning proceedings so that treble information sounds more balanced – a fact which leads to less instances of soundstage ‘harshness’.

Samsung PS51E490 Verdict
How appealing the Samsung PS51E490 is depends pretty much completely on your financial situation. If you can afford to spend more, we would recommend that you step up to either the Panasonic TX-P50UT50 (available for around £800-£900) or one of Samsung’s E6900 models. All these alternatives give you online functionality and significantly better all-round picture quality.

If, however, you only have around £600 to spend and you couldn’t care less about Smart TV content, then the Samsung PS51E490 is both bigger and at least a bit better than you probably expected any such affordable TV to be.