The first thing that springs to mind as we start testing Samsung’s PS51D8000 is Spinal Tap. Not because the TV has long hair or a thing for bum cakes, but because just as Spinal Tap’s amps ‘go to 11’ instead of 10, where most mid-sized TVs only go to 50in, the PS51D8000 goes to 51in.

In reality, though, we can’t really say that we felt the extra size during our tests, leaving us feeling that the extra inch of picture is ultimately more of a clever marketing ploy than a revolution in plasma TV. But before too much cynicism sets in, it’s fair to say that the PS51D8000 has plenty of other stuff to crow about. Starting with its design.

The bezel round the screen is made from a gorgeously glinting burnished silver metal, offset beautifully by a few mm of slightly recessed transparent outer trim. As well as continuing the style theme established by Samsung’s D8000 LCD TVs, this lovely metallic finish really helps Samsung’s set stand out from the predominantly black crowds. 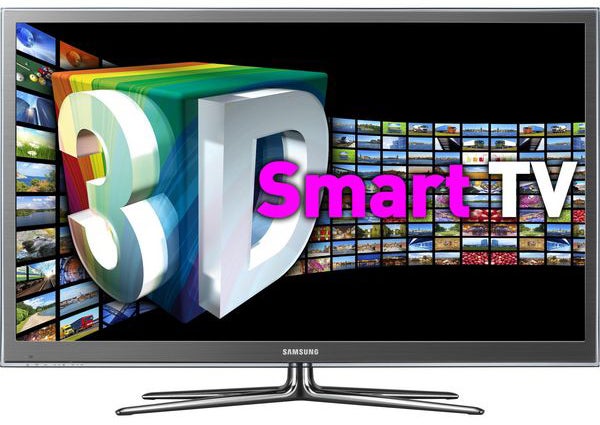 The bezel is much wider than the almost non-existent bezel of Samsung’s D8000 LCD TVs, and its rear sticks out quite a bit further than those of its edge-LED siblings, too. But when the bodywork’s this pretty, who cares if there’s a bit more of it?!

As you’d expect of Samsung’s flagship plasma TV range, the PS51D8000 is bristling with connections. Four HDMIs are on hand for receiving digital HD and 3D sources, while other highlights include a pair of USB ports, a LAN port, and best of all, built-in Wi-Fi.

The USBs can be used for playing back the usual video, music and photo file suspects, or you can use them for recording (losslessly) from the integrated Freeview HD and Freesat HD tuners to USB storage. You can even add a webcam via USB for use with the PS51D8000’s built-in Skype service.

The LAN/Wi-Fi connection options are there, of course, for accessing either files stored on a networked DLNA PC, or for connecting to Samsung’s Smart TV service. 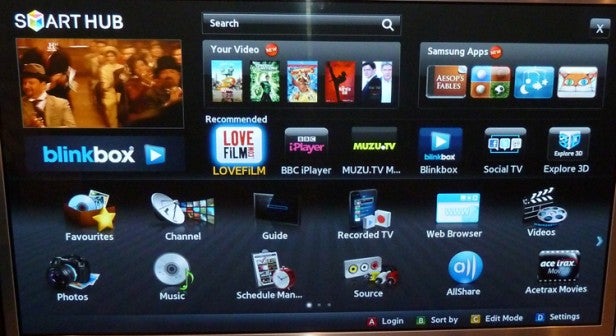 This service continues to set the bar in terms of both its interface and the amount of content it carries (though LG is now pushing Samsung hard with its own Smart TV service). Sony still leads the way, just, when it comes to providing our favourite online TV content or video. But Sony’s Bravia Internet Video interface is currently miles behind Samsung’s ‘Smart Hub’.

We’ve been over Samsung’s online features numerous times before this year, so this time we thought we’d just list the main features, and do a head count of the rest (bearing in mind that since we’re talking about a cloud service, its content can change at pretty much any time). 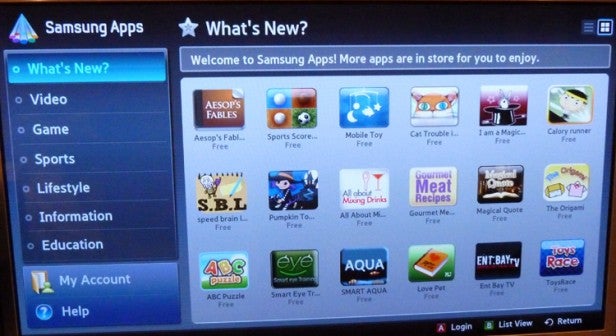 Beyond these, there are nearly 60 lifestyle apps covering everything from how to tie a tie to religion, recipes and knitting; more than 50 ‘information’ apps taking in such diverse stuff as This Day in History, The History of Rome, advice on childbirth, plus tips on origami, giving up smoking, and avoiding food poisoning; 78 small and mostly forgettable games, including stuff like Sudoku, Minesweeper and Black jack; and finally 34 educational apps mostly aimed at young children learning to read, reason or count. Though we were pleased to also find in this section a couple of more ‘manly’ apps: one about the planets and one about – yes! – the periodic table. Now this is what our TVs have really been waiting for…

As noted in earlier Samsung reviews, the sheer wealth of content on the PS51D8000‘s Smart TV platform makes it hard to sort the wheat from the chaff. Also, unusually for Samsung, our PS51D8000 suffered a few issues with certain apps not loading properly. For instance, we couldn’t access the Social apps (Facebook, Twitter) a few times, supposedly because of ‘interference on the network’. The issues were always temporary, but were invariably annoying.

Turning to the screen’s key specifications, it’s a full HD affair and is equipped with Samsung’s Real Black Filter for boosting black level response. It also provides a pretty extensive set of picture adjustments, including decent colour and white balance management, and an unusual feature whereby you can adjust the Cell Light output of the screen, effectively raising the image’s brightness (and power consumption) without reducing black level depth.

A little time spent with some of these tools is recommended, actually, as not for the first time we found some of Samsung’s presets a little ‘gaudy’ or at the very least not to our tastes. But we’re not talking anything particularly severe level here; just 20 minutes with the tortuously organised but ultimately useful HD Video Essentials Blu-ray should be enough unless you want to pay a professional to do the calibration for you (though the PS51D8000 is not endorsed by the Imaging Science Foundation).

We were generally very impressed a few months ago by the picture quality of the PS51D8000’s supersized sibling, the 64in PS64D8000. So it’s no surprise to find the PS51D8000 delivering the goods too.

In 2D mode it really is quite outstanding. Right away we were struck by how richly saturated its colours are for a plasma TV, even after the set had been calibrated to deliver the most natural colour tones and most satisfying black level response. 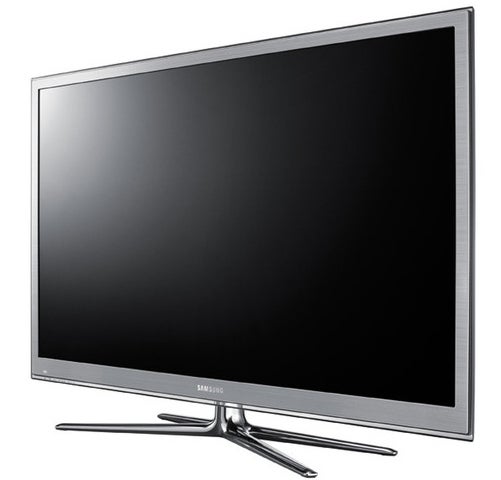 Helping deliver this colour vibrancy is a really strong brightness performance. As usual we’re not talking here about levels of brightness that might rival a top LCD TV, but the PS51D8000’s brightness is certainly good by plasma standards – so much so that you won’t have to keep your TV in perpetual semi-darkness to really enjoy it like you do with many plasma TVs.

What’s even better about the PS51D8000’s vibrancy and brightness is that it’s achieved without nearly as much compromise to black level depth as expected. For while its black level response during dark scenes isn’t quite as profound as that of Panasonic’s class-leading plasma TVs, blacks certainly look more natural, less grey, more replete with shadow detail and best of all more even than those of any LCD/LED TV.

Furthermore, we didn’t see any of the slight brightness flickering witnessed on occasion with Panasonic’s plasmas, with our only complaint in blackness terms given the PS51D8000’s remarkably affordable price being that some inputs seem to have a slightly shallower black level response than others.

Yet more good news finds the PS51D8000’s HD images looking extremely crisp and detailed, and in a real advance over previous Samsung plasma generations, this sharpness is achieved without the picture looking ‘fizzy’ or grainy. Sharpness remains intact when there’s lots of motion going on too, in typical plasma style. And Samsung has managed to keep plasma’s common dithering noise over moving objects almost completely out of the picture. There are no serious problems with judder either.

Other strengths comprise fairly satisfying upscaling circuitry for standard definition viewing, the fact that you can watch the screen from pretty extreme angles without its pictures losing any contrast or colour, a gaming-friendly input lag of just 32ms, and finally the extent to which the screen soaks up ambient light compared with some other rather reflective big-screen TVs we’ve seen recently.

Donning the single pair of 3D glasses you get free with the TV, the good news mainly continues.
Full HD 3D Blu-rays, for instance, look exceptionally sharp and detailed – more so, in fact, than they do on Panasonic’s 3D plasmas.

The sense of depth the screen creates is reasonably deep but always natural and never fatiguing, and pictures are a bit brighter than those of a well-calibrated Panasonic 3D model – a fact which also means you can see a little more detail in dark picture areas.

There’s also less of the hated crosstalk double ghosting noise than you get with most rival 3D TVs too – including Samsung’s own LCD models. However, the PS51D8000 does clearly suffer more with crosstalk than the Panasonic 3D plasmas with which it inevitably draws comparison, especially – though not exclusively – during dark scenes. 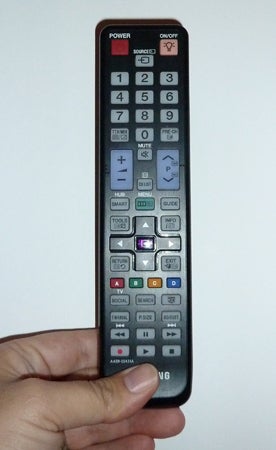 One other area for Samsung to work on is its 3D colours. For it seemed to us that the set doesn’t adjust its colour tones enough automatically when a 3D input is detected to compensate for the colour-changing impact of the 3D glasses. We ended up calibrating things to look better ourselves, and leaving our settings permanently stored under the Dynamic picture preset, using adjusted versions of the Standard or Movie presets for normal 2D viewing.

With excellent black levels and light uniformity to join the other 3D strengths described earlier, though, the PS51D8000 remains one of the better 3D screens we’ve seen to date. Wrapping up with the PS51D8000’s audio, it’s another success story for the most part. Very decent levels of volume can be achieved without the speakers sounding compressed or distorted, and the mid-range is open and bright without trebles descending into harshness. There’s even a reasonable amount of bass to be heard – something that’s very rare in the flat TV world.

Verdict
While the PS51D8000’s 3D pictures aren’t perfect, they’re still well above average by the standards of the 3D world at large. As such, they join with its terrific 2D picture quality and some well rounded, potent audio in making the PS51D8000 an almost ridiculously good value proposition for the discerning buyer.