If you keep your ear to the AV ground, you’ll probably know that Samsung has a swanky new range of flat TVs waiting in the wings for a spring launch. So we feel it’s only fair to say up front that the PS50Q97HDX is not one of these. It’s simply a 50in plasma model from the Korean brand’s current flat TV range.


But we also feel we just had to cover it before it disappears from UK shelves, for the very simple reason that it can now be had for comfortably under £900, making it potentially an AV steal that you simply cannot afford to pass up.


As with all of Samsung’s recent flat TV output, the PS50Q97HDX is quite a looker. The glossy black bezel and cute, subtle curves ensure that it cuts a dash that leaves the vast majority of its rivals looking bland by comparison. 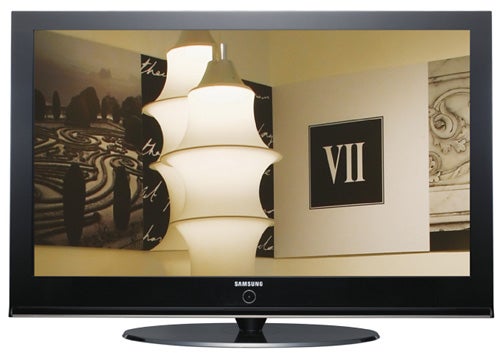 The PS50Q97HDX’s up-front appeal merely grows with the discovery on its rear of no less than three HDMIs – one more than you’ve any right to expect on such an affordable 50in telly. Perhaps inevitably these HDMIs are slightly ‘limited’ in that they’re built to the v1.2 standard, not the latest v1.3a standard, and so can’t take Deep Colour signals or auto-lipsynching data from any sources that might support such features. Nor can they handle 1080p. But I personally don’t consider either of these issues a ‘biggie’ on such an inexpensive product.


Elsewhere among the TV’s connections are a component video input, a PC D-Sub input, two SCARTs and the usual lower-quality S-Video and composite video inputs. In an ideal world there would have been a digital audio output for shipping soundtracks from the digital tuner or received via the HDMIs to an external AV receiver, but then there probably aren’t many people out there who would really want to use such a facility anyway.


As usual with a Samsung TV, the PS50Q97HDX claims one or two pretty outlandish specifications. The 1,365 x 768 HD Ready native resolution is straightforward enough, but the claimed contrast ratio of 15,000:1 falls only a fraction short of the 16,000:1 figure claimed by Pioneer’s premium-priced, genuinely ground-breaking KURO range. Surely Samsung’s contrast can’t really be ”that” good for £874?


Probably not. But Samsung does have a technological explanation for why it can claim such a high figure: a new Ultra FilterBright screen structure which apparently eliminates as much as 90 per cent of all onscreen reflections, thus allowing black levels to look deeper and purer. Also playing its part in delivering such a high claimed contrast is a new Optimal Light Filter that Samsung reckons considerably reduces light diffusion as the picture emerges from the screen.

Samsung has also been busy beavering away at its plasma TVs’ image processing, coming up with a quartet of new developments. For instance, a Silhouette Editor is on hand to try and improve plasma technology’s common contour and noise issues when showing moving objects. It works by calculating ahead the likely movement in an image, figuring out where the contours are, and adjusting the image tone locally in order to minimise the visual ‘damage’.


Then there’s Samsung’s Natural True Colour system, which keeps constant tabs on colour tones as they move across the screen to ensure that their tone remains consistent.


Next up is something called Movie Plus, which creates additional frames of image data to insert between the ‘real’ ones in a bid to make movement look crisper and more fluid.


Finally you get Smart Frame Plus, which I have to confess I know precious little about other than that it’s designed to reduce image flicker. 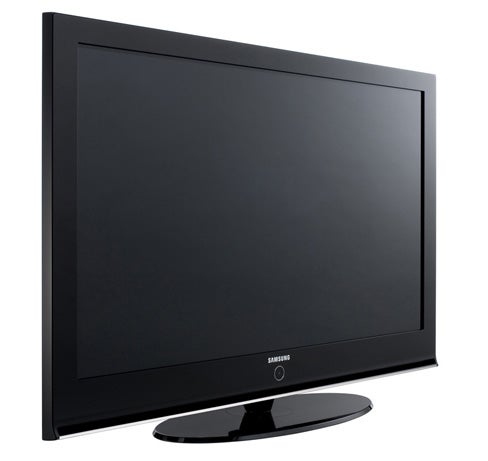 
The funny thing about all these features is that some of them actually appear to make pictures look worse rather than better. The Edge Enhancer, for instance, overcooks edges to a most unpleasant degree, making them stand out from the image in a very distracting way.


The Movie Mode should be treated with suspicion too, for while it certainly does make motion look smoother, its workings also tend to make moving objects look slightly unnatural and shimmery.


It’s perhaps just as well, then, that you don’t need either of these features to enjoy really decent pictures from the PS50Q97HDX.


Kicking off a host of good points is the screen’s black level response, which does a fine job of trying to portray the darkness of the Louvre scenes in ”The Da Vinci Code”, recorded in HD from Sky. There’s precious little sign of the grey cloud over the darkest corners that’s seen on so many flat TV rivals, plus there’s a decent amount of visible detailing in dark areas, ensuring that they don’t look hollow or flat.

Colours are extremely potent too, reproducing the richly colourful cars and streets of Paradise City in Burnout Paradise with plenty of vigour. But the TV can also do subtle, making the skin tones on show during the dark ”Da Vinci Code” scenes we mentioned earlier look unusually credible. The slightly green undertone that’s plagued some previous Samsung plasma generations during dark scenes now hardly ever rears its ugly head.


The PS50Q97HDX does a good job of suppressing video noise too (provided you avoid the Movie Plus and Edge Enhancer features), with HD looking more or less pristine for the most part, and even standard definition bearing up better than is common on a 50in screen. There’s hardly even any sign of plasma’s traditional dithering noise as objects cross the screen. 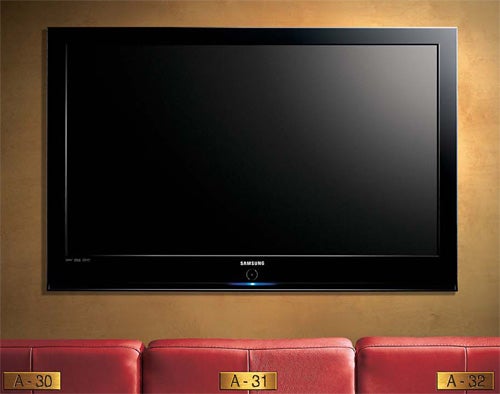 The last feather in the PS50Q97HDX’s picture cap concerns its fine detail response, as it renders all the lovely detailing in HD sources so well that at times it’s easy to forget that it’s only a 1,365 x 768 panel rather than a full HD one.


Happily the PS50Q97HDX also packs a solid audio punch to back up its video strengths. There’s a nice, open mid-range that’s able to expand at least a little during action scenes while retaining vocal clarity. Trebles are clear and well positioned too, with only a slight shortage of bass costing the TV a couple of sound quality marks.


Samsung’s PS50Q97HDX doesn’t quite manage to scale the same performance heights as models from current plasma champs Panasonic and, especially, Pioneer. But what it certainly does do is redefine the sort of size and quality you can expect to find for under £900.