Today’s review is all about two things that just don’t belong together. Namely, a flat TV screen size of 50in and a price tag of under £1750. With your average 50in plasma these days still costing in excess of £3k, it’s anyone’s guess as to how Samsung has managed to get the PS50Q7HD out for under two. Let’s just hope the reason it’s so cheap doesn’t turn out to be that it’s, well, crap…


First impressions suggest that any such worries are unfounded. We’ve seen some pretty attractive 50in plasmas in our time, but this one takes the biscuit. Everything about it reeks of quality, from its opulently glossy finish to its sumptuous deep black colour scheme and minimalist, elegantly sculpted lines. 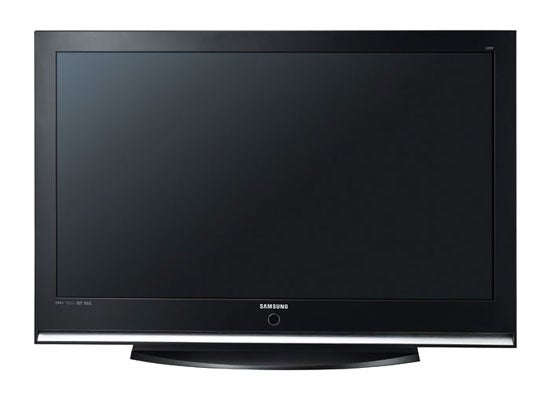 Perhaps the PS50Q7HD’s budget price will make itself felt with the TV’s connections? Yes and no. In the yes column, the TV only has one HDMI socket and two Scarts when such a home cinema-friendly TV really ought to provide one extra of each. In the no column is the inclusion of a D-Sub PC input, and a couple of jacks which immediately prove the presence of a built-in digital tuner: a CI slot for subscription TV channels, and a digital audio output.


The latter of these lets you ship Dolby Digital 5.1 audio tracks – should the Freeview terrestrial digital platform broadcast any – to a suitable surround sound receiver.


Remarkably the digital tuner is far from the only eye-catching feature of this cut-price plasma. For starters it’s also HD Ready thanks to: the inclusion of component video jacks alongside the HDMI; a sufficiently high native resolution of 1,366 x 768; and full compatibility with the necessary 720p and 1080i HD formats. (There’s no 1080p support, though.)


Also startling is a claimed contrast ratio of 10000:1, an outlandish figure that promises black level talents that at least rival those of plasma superstars like the latest models from Panasonic and Pioneer.

Then there’s the inclusion on the PS50Q7HD of Samsung’s proprietary Digital Natural Image engine processing, complete with its talents for enhancing the appearance of fine detail, boosting black levels/contrast, improving motion handling and making colours more vibrant and natural.


Also contributing to image processing duties is a new Samsung system called Smooth Motion Driver, which allegedly creates and inserts up to 10 extra frames of image every second in a bid to make movement look smoother and more stable.


And still we’re not done with the features, as we find the TV including a new ‘FilterBright’ element in its screen that supposedly cuts out 90 per cent of ambient light-induced reflections; plus a 7-day electronic programme guide system, and memory space for storing multiple recording timer events. 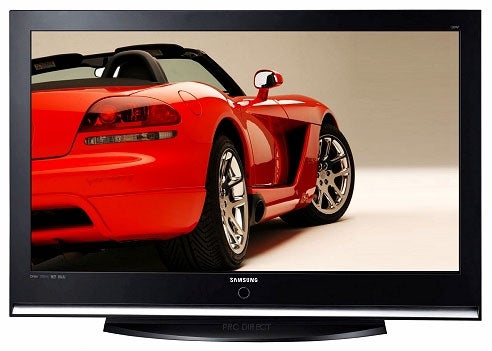 This vast features count is almost unbelievably impressive for a sub-£1,750 50in plasma TV, and leaves us with only one complaint, namely that idiotically you can only scroll through the EPG listings in maximum two hour leaps, making searching for a programme a week away horrendously time-consuming.


All the good stuff we’ve come across so far suggests that if the PS50Q7HD has a price-induced weakness, it must be its AV performance. Yet as we put it through its paces, we find nothing like the horror show we might have anticipated.


One of the common areas of weakness for relatively inexpensive plasma TVs is sharpness. Yet here you get a picture that’s not only totally capable of doing great justice to the extra pixels of detail and texture found in high definition sources, but also makes many standard definition sources look reasonably crisp too. To be fair, Samsung’s DNIe is no rival for Philips’ Pixel Plus 3 HD or JVC’s DynaPix HD in the detail-boosting department, but even just improving things a bit – without introducing lots of unwanted side effects – seems a fair deal for such a cheap TV.

The picture’s sharpness is particularly apparent with Sky HD cricket and football coverage, as well as unusually crisp Xbox 360 games like Prey and Lord of the Rings: The Battle for Middle Earth II. And it’s also with pristine, fast-moving sources like this that you most notice the impact of Samsung’s Smooth Motion Driver, as objects really do glide across the screen more ‘solidly’, for want of a better word. The SMD processing does occasionally struggle to keep up with particularly fast-paced action, especially while watching HD, causing the occasional judder. But for the most part it’s a feature we’d rather have than not. And in any case, you can always turn it off if you don’t like it.


Unlike Samsung’s previous plasma generation, the PS50Q7HD enjoys impressively vibrant, largely natural colour tones that give pictures plenty of dynamism and richness. What’s more, these colours are allowed to strut their stuff against a backdrop of some of the deepest black levels seen from a flat panel TV. And these black levels aren’t just empty dark holes either; the picture’s combination of brightness and contrast is canny enough to ensure that even the darkest corners of an image still contain subtle details and a sense of depth.

The current benchmark plasmas from Panasonic and Pioneer do still highlight one or two weaknesses in the Samsung’s picture makeup. First, although colours are, as we said, generally natural, flesh tones can look a touch green around the gills and overstated during darker scenes. Next, very bright colour elements, such as the Sky News channel logo, can become over-dominant to the point of looking artificial and forced. Finally, DNIe doesn’t suppress all forms of video noise quite as successfully as one or two other picture processing systems. But these issues are all pretty minor given the context of the Samsung’s price.


The PS50Q7HD’s only serious weak link is its sound. It employs a ‘hidden’ speaker design, where the speakers are tucked on a down-facing ledge under the screen. And this configuration results in a soundstage that’s underpowered, flat, short of frequency range and generally just plain average.


After failing to impress with its previous couple of plasma generations, Samsung has finally come up trumps with the PS50Q7HD. It benefits from all manner of performance improvements, has been stuffed to bursting point with features, is dressed to kill, and most importantly of all has been priced so ground-breakingly affordably that what few foibles it has – even the flimsy sound – are eminently easy to live with.