Samsung’s attitude towards the whole thorny plasma vs LCD debate is refreshingly non-partisan. Basically, so long as there are people out there wanting to buy both technologies, Samsung will continue to sell both as well. There’s none of this ‘trying to force you to go one way or the other’ nonsense championed by many rival brands.


Having said that, there’s no doubt that the majority of Samsung’s marketing push with its latest screens has been focussed on its LCD rather than its plasma contenders. Most specifically the sumptuously designed ‘hint of red’ A656 LCD models, numerous examples of which have performed very nicely in recent TrustedReviews tests.


So it’s with some curiosity that we get our hands on Samsung’s PS50A556: the first plasma TV we’ve seen from the Korean mega-corps in some time. Will this turn out to be one of Samsung’s best-kept secrets, or will the brand’s relative silence about its plasma screens be joined by a luke-warm performance? 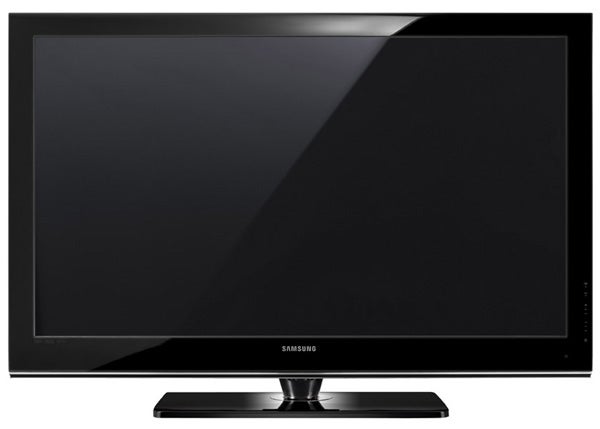 First impressions, as usual with Samsung, are very promising. For the TV’s price of just £1040 for a 50in plasma TV is really quite amazing. Especially when that 50in plasma TV also happens to sport a Full HD 1,920 x 1,080 pixel count.


The set is also quite easy on the eye in its high-gloss black finish offset by a little semi-translucent strip along the bottom edge. Having said that, it’s certainly no rival for the A656 LCD models aesthetically, and doesn’t stand out from the crowd as much as Samsung TVs usually do.


It’s also not quite as emphatically well connected as many Samsung TVs. But that just means it ‘only’ has three v1.3 HDMIs like the vast majority of its rivals, rather than the grandstanding four found on other recent Samsung TVs. The PS50A556 does still retain, though, the handy ‘Wiselink’ USB 2.0 port for direct playback of JPEG images from USB storage devices, alongside the customary D-Sub PC and SCART options.


People looking to fit the PS50A556 into a custom, fully wired home cinema installation might be annoyed that the set has no RS-232C control port. But to be honest, we suspect that the majority of such people will be looking a little higher up the AV tree for their big-screen centrepiece.

When it comes to other specifications, the slightly hit and miss tone established so far continues. Failing to really catch the eye, for instance, is a claimed contrast ratio of 30,000:1. It probably sounds crazy to diss a figure like this when only a year or two ago the very highest flat TV contrast figures around were between 15,000:1 and 20,000:1. But there’s just no getting around the fact that the industry leaders in the plasma world, Panasonic and Pioneer, are now both quoting figures in excess of 1,000,000:1.


It’s also a slight pity these days not to find 100Hz on this set, though there is potential compensation for this in the shape of Samsung’s Movie Plus system, which interpolates extra frames of image data to try and make motion look sharper and more fluid. 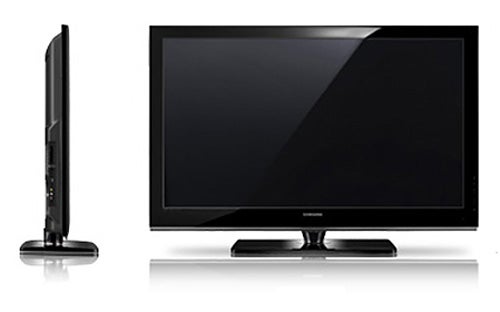 That’s not the end of the video processing either, as the set also carries Samsung’s DNIe+ video processing, with its desire to improve colours, contrast, motion and noise suppression. You get 18-bit colour processing promising 262,144 shades of grey level gradation, and Samsung’s Filterbright technology, whereby a special filter built into the screen drastically reduces onscreen reflections. This feature is one of the contributing factors to the set’s 30,000:1 contrast ratio.


Other interesting features include a selection of reasonably useful picture presets; picture-in-picture facilities; a tool for tackling plasma’s issues with screen burn; and an unusual ‘cell light’ option reckoned to affect the screen’s overall light output. Though to be honest, we struggled to see how this latter feature did anything not also achievable via the set’s brightness and contrast settings.

There’s one last niggle I need to get off my chest before we get into the PS50A556’s performance: it’s operating system. For the most part this isn’t bad, thanks to a decently designed remote control and passably attractive onscreen menus. But it lets itself down in two really daft ways. First, to skip between external video inputs, you have to repeatedly press the ‘Source’ button, rather than being able to call up a list of inputs and quickly select the one you want from there.


Second, if you choose, say, the Sports picture preset, you can’t change this from the Picture or Sound onscreen menus; if you try to, you just get a message telling you to change the feature from the separate Setup menu. Surely it would have been simpler to let you adjust the Preset from the picture and sound sections rather than generate an error message pointing you elsewhere? Weird.

Coming to the 50PSA556 pretty soon after LG’s surprisingly impressive 47LG7000 LCD model, I have to say that my immediate feeling regarding its picture performance was one of slight disappointment.

Regarding the brightness, there’s just no ignoring the gap between the sort of vibrancy and punch of the LG LCD and the relatively dull, muted light output of the Samsung.


You can improve things to some extent by calling in the PS50A556’s Dynamic output mode, but even this can’t totally redress the balance. And it also has the unfortunate side effect of making sources – especially standard definition broadcasts – look distractingly noisy.


As for sharpness, despite the PS50A556 having a Full HD resolution it just doesn’t deliver the same sort of jaw-dropping high definition snap and clarity seen with the very best LCD screens – especially any of Philips’ recent output. 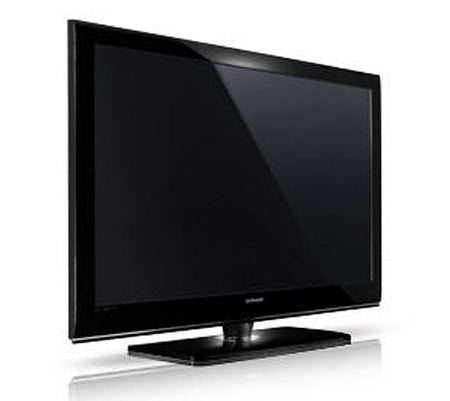 The problem isn’t remotely severe enough to stop HD images on the PS50A556 looking clearly HD in nature, but the overall effect feels more like something you’d see on a good HD Ready screen than a Full HD one.


In fact, if you use any picture presets aside from the Movie option, standard definition pictures can really start to look quite unpleasant, with very exaggerated MPEG artefacts during digital broadcasts.


To be fair, you can considerably reduce this sort of noise using a provided noise reduction circuit. But this causes problems of its own in the form of extra softness and a slightly ‘processed’ look to proceedings.


Even once you’ve started to come to terms with the PS50A556’s sharpness and brightness shortcomings, though, you start to see something else as well: colour tone problems. Again particularly evident with standard definition sources, it seems as if some skin tones look a bit too pink or orange for comfort, while some shades of green look slightly sickly, and sometimes dark elements in otherwise reasonably light pictures take on a gently green undertone.


I shouldn’t over-stress this issue, as it’s not as much of a deal-breaker as it probably sounds when it’s just written out cold. For much of the time the PS50A556’s colours are actually pretty believable, particularly using the Movie preset. Also, the amount of time they’re believable increases exponentially if you switch to HD viewing.

Unfortunately, though, we’re not done with the bad news yet, not by a long chalk. Motion isn’t particularly well handled by the PS50A556, for instance, with occasional signs of fizzing noise over horizontally moving skin tones, and a general slight blurring unless you have the Movie Plus option set to its highest setting.


Yet pushing Movie Plus this hard also results in some noticeable shimmering glitches during rapid camera pans that’s for my money worse than the motion blurring it’s meant to counter.


The Movie Plus option doesn’t appear to be available at all during 1080p/24 Blu-ray viewing, meanwhile, leaving you no way of tackling the marginally stuttery, imprecise look such footage tends to carry. 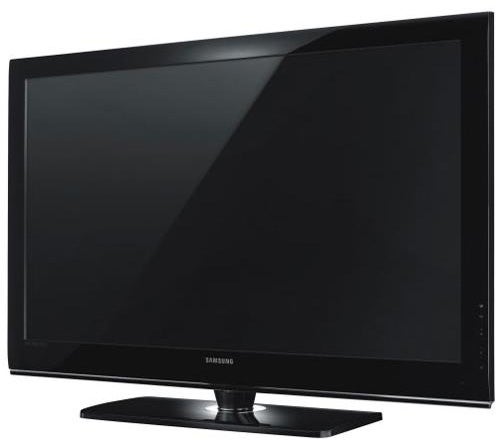 I also found a strange colour glitch during Blu-ray viewing whereby some colour tones suddenly take on an artificial, noisy look. A great example of this occurs near the start of ”Sweeney Todd”, as a curious pinky noise effect plays over the faces of Todd and Anthony during the close-ups on them just after they disembark from the ship that carries them to London.


Turning to the last of the PS50A556’s picture elements, black levels, I found them to be good without being spectacular. Which is to say they’re easily deep enough to show the door to many an LCD rival, and provide typical scenes with good punch and dynamism. But at the same time there’s definitely a trace of greyness to be seen during ”Sweeney Todd’s” many very dark sequences. Also, shadow details don’t seem quite as evident as they are on Panasonic and Pioneer screens.


If the PS50A556 just about manages to pass muster as a solid if unremarkable picture performer, especially when its price is taken into account, it’s definitely below par sonically.


As soon as you push its ‘invisible’ speakers even slightly hard, the soundstage turns flat and lifeless, with very little bass or treble range, and muddied vocals. In fact, action scenes sometimes even caused my PS50A556’s cabinet to succumb to some unwanted vibrations and ‘phutting’ noises.


Experience of previous Samsung plasma TVs and the brand’s recent LCD efforts had me hoping for great things from the PS50A556. But while it can’t be considered a total washout given its price, it certainly can be considered a disappointment. And quite a substantial one at that.