That may sound a little cruel, but until last summer most of Samsung’s digital camera output had consisted entirely of the Digimax range of compacts that, while often technically competent and always reasonably priced, have been at best uninspiring, and at worst shoddily made, poorly designed and lacking in performance. 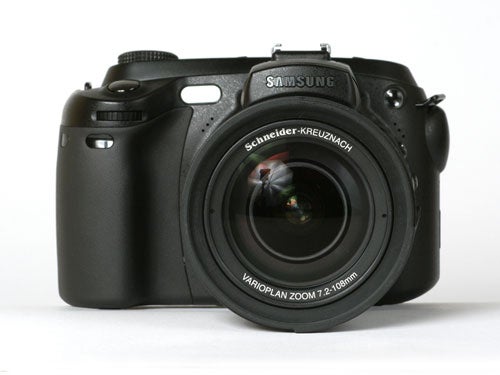 Recently however the company seems to have taken on a new lease of life, and has launched a series of cameras very different from its previous efforts. From the ultra-slim Digimax i5 to the fully featured NV7, and a new range of Pentax-based digital SLRs, Samsung has been excelling itself, and the results have been impressive to say the least.


The Pro815 is what has become known as a “bridge camera”, a high-end digital camera with a non-interchangeable zoom lens, but offering features and image quality comparable to an SLR. It has a list price of £550, but is available for under £400 from a number of online retailers, so in price as well it compares favourably with most consumer SLRs. 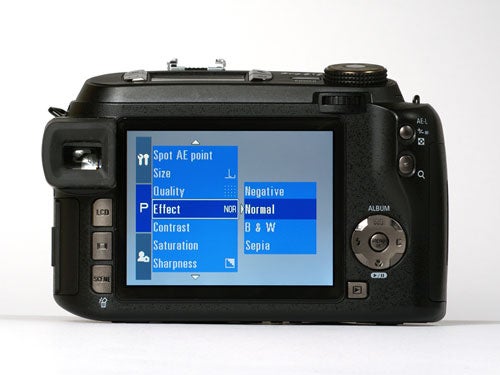 It also resembles an SLR in terms of size and weight, measuring 135.5 x 87 x 78.6mm with the lens retracted, and weighing a hefty 870g without battery or card. Most of its bulk comes from that huge lens, which is equivalent to 28-420mm on a 35mm camera. With a maximum aperture of f2.2-f4.6 it is exceptionally fast, certainly faster than most equivalent SLR lenses. Schneider-Kreuznach optics have a deservedly high reputation and this lens shows why, employing technologies such as low-dispersion glass and aspherical elements to minimise chromatic aberration and distortion. It also has a mechanical manual zoom, enabling precise framing.


The body of the camera is also reminiscent of an SLR. It has a strong metal body finished in an attractive semi-matt black texture. With such a large and heavy camera handling is clearly a major issue, so the Pro815 has a large and comfortable rubberised handgrip with a sculpted thumbgrip at the back. I wouldn’t recommend trying to use the camera with one hand, but it is at least possible.

The main feature on the back of the camera is of course the huge 3.8in LCD monitor screen. With 235,000 pixels it is nice and sharp, and also quite bright, but it is also highly reflective, limiting its usefulness in bright sunlight. However the 815 also has a very good electronic viewfinder, which although less than half an inch across also has a resolution of 235,000 pixels, making it one of the sharpest I’ve ever seen.


Not content with that though, the 815 sports a third LCD screen on the top plate. This is normally used for shooting data, but it is also a full colour monitor and can be used as a small but useful waist-level viewfinder. 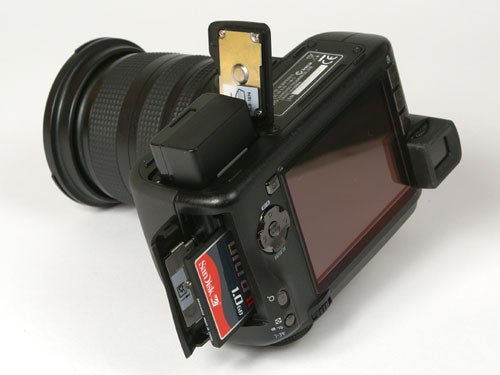 With space on the back panel at a premium, most of the camera’s various control buttons are located elsewhere on the body. Focusing controls are on the side of the lens barrel, while drive mode, ISO setting, self timer and metering mode are located on the top panel.


The main controls are similar to those on an SLR, with two input wheels, one on the front and the other on the back, in positions which will be familiar to any Nikon SLR owner. For the most part the control system is very good, however there are a few curious oddities. Exposure compensation for example is far from obvious. It is adjusted by pressing a button on the back, and then rotating a ring on the barrel of the lens. It took me a while to get used to that one.


The set of features on the 815 is enough to tempt any serious photographer. It offers a full range of manual exposure options, which thanks to the excellent controls are quick and easy to use. The aperture range of f2.2 to f8.0 is better than most high-end zooms, as is the shutter speed range of 15-1/4000th seconds.


For more general use it also offers a full Auto mode, as well as a range of eleven scene modes. Unfortunately these are not so easy to use, mainly because they are only identified by pictograms, some of which are incomprehensible and are also not adequately explained in the manual. 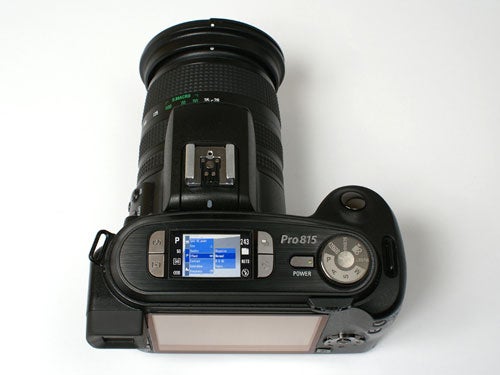 Menu options include second-curtain flash sync, colour space (sRGB or Adobe RGB), adjustable sharpness, saturation and contrast, and a couple of colour options including negative, B&W and sepia. The camera offers a choice of spot, matrix or centre-weighted metering, but has no multi-point focusing mode. The focus area can be moved around the frame though, so it is possible to work around this.


Overall performance is also very good. In continuous shooting mode at the highest resolution JPEG setting, it will shoot and about 1.5 seconds per frame, focusing for every shot, and can keep this up until the card is full. In high-speed continuous mode it will fire off a burst of shots at about 2.5 frames per second, but slows down after about 13 frames as the buffer fills up. It also has an ultra-high-speed mode that shoots 10 frames a second, although this is limited to 30 frames and 1,024 x 768 resolution. In both of these latter modes, the monitor and viewfinder are switched off during shooting, which is a little annoying.

The only real performance problem was the autofocus system, which proved to be very slow. I found that trying to photograph any moving object was very difficult and frequently unsuccessful, because by the time the AF had locked on and the picture was taken, the subject had moved out of frame. Unlike a digital SLR, the 815 also has a movie mode, offering up to 640 x 480 resolution at 25 frames a second, although clip length is restricted to 30 seconds. 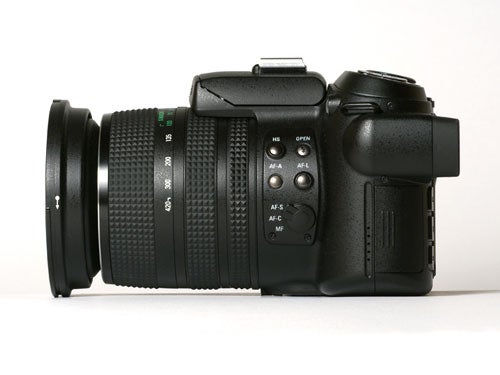 One major omission though, and one which some may feel ruins the camera, is the lack of image stabilization. On a camera with such a huge telephoto range this is a serious flaw. Unless you own and use a very solid tripod you will have major camera shake problems with the Pro815.


The most useful feature for the serious photographer is the RAW mode, which uses the excellent Adobe Digital Negative (DNG) format. If you’ve got an up-to-date version of Adobe Photoshop this lets you get the best out of the 815’s picture quality.


The resulting picture is outstanding. The excellent lens provides superior sharpness and detail with minimal distortion even at wide angle, and the CCD and imaging system makes the most of it. Colour rendition is nice and neutral, exposure is superb and image noise is kept to an acceptable minimum even at the maximum 400 ISO.

File compression is not too severe, producing maximum resolution JPEGs of around 3.7MB with little or no compression artefacts. A 1GB CF card provides enough space for 245 photos. 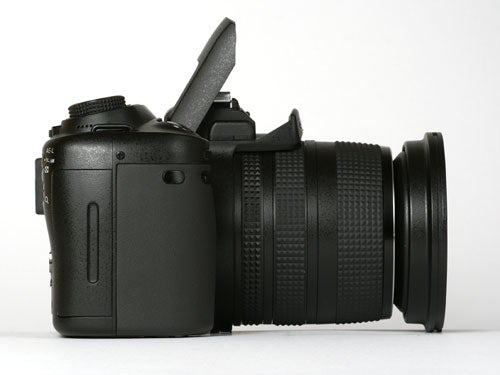 Shooting in RAW mode and processing the results in Photoshop provides the best results, with sharpness and detail at least as good as some consumer DSLRs, and certainly better than the majority of other high-end zoom cameras. In RAW mode a 1GB card is enough for 62 photos.


Samsung has achieved a remarkable result with the Pro815, and it certainly bodes well for the company’s future in the digital camera market. I can’t wait to see what it does next.


The Samsung Pro815 is a truly superb camera, with superior build quality, outstanding design, a great range of versatile, creative and in some cases unique features, very good performance and outstanding picture quality. The only real let-down is the sluggish autofocus, but other than that it’s a serious alternative to a digital SLR. 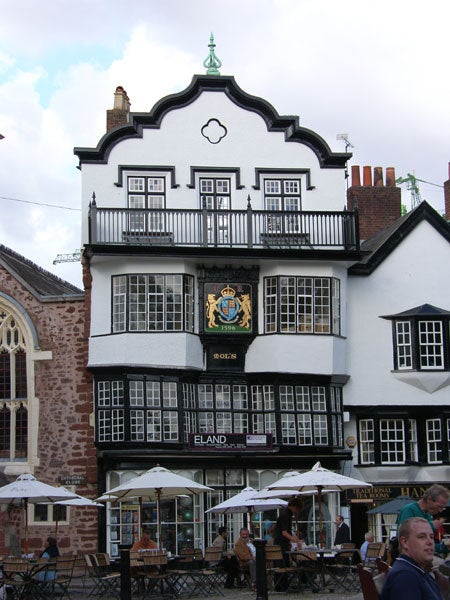 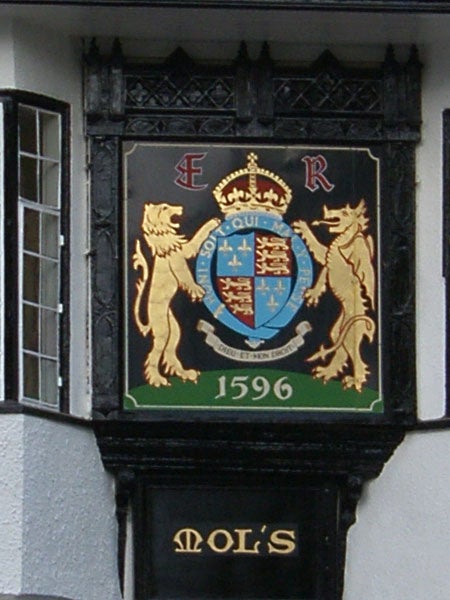 As you might expect, at the lowest ISO setting the images are pin-sharp and silky smooth. 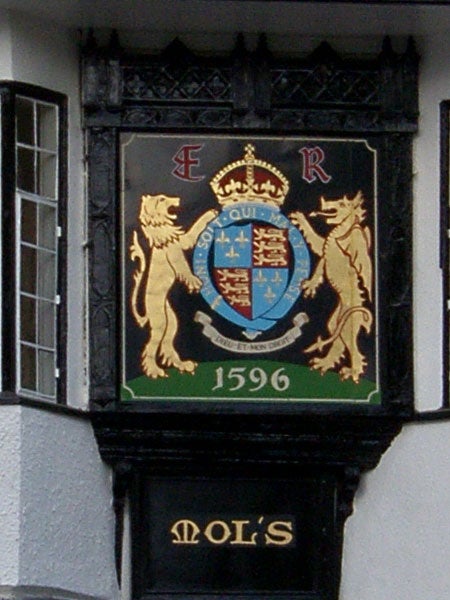 At 100 ISO there is a little image noise on the green channel, but the rest of the image is still nice and smooth. 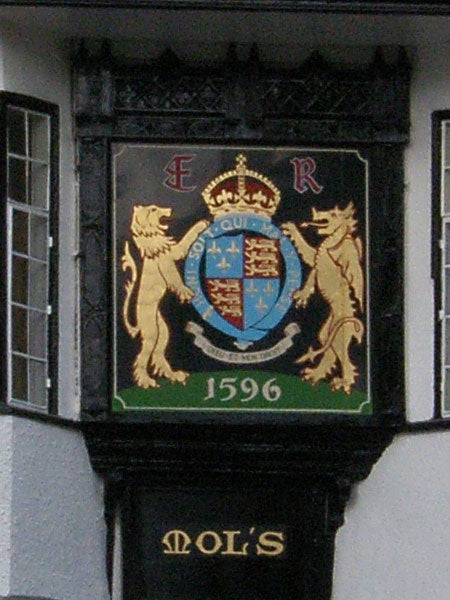 At 200 ISO the noise is also visible on the red channel, and is slightly worse on the green, but the sharpness is still good and the picture is quite usable. 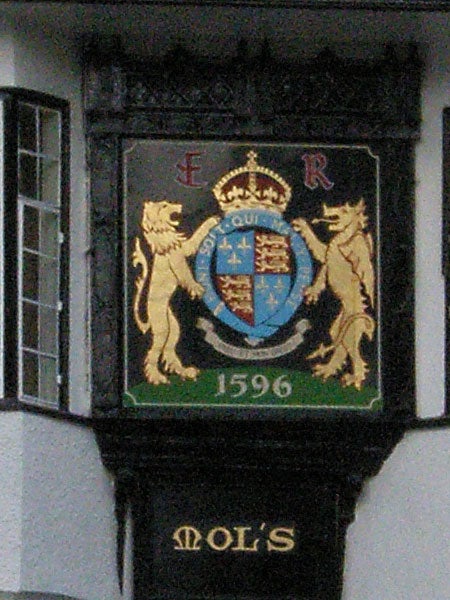 At the maximum ISO setting of 400 there is now some image noise visible in all areas of the image, but it is well controlled and the overall picture quality is still good. 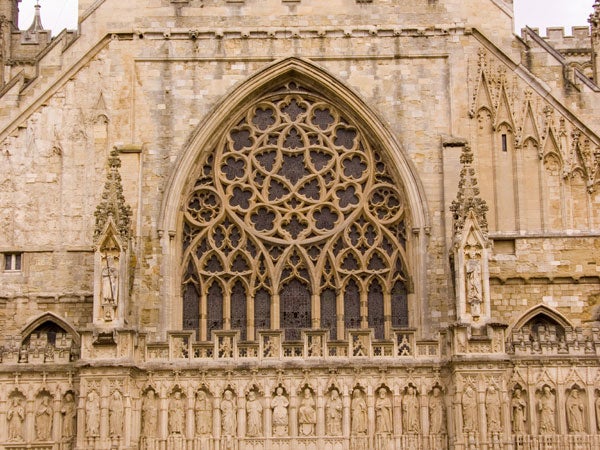 This shot of Exeter cathedral was taken at medium range and a medium zoom setting. See the detail from it below. 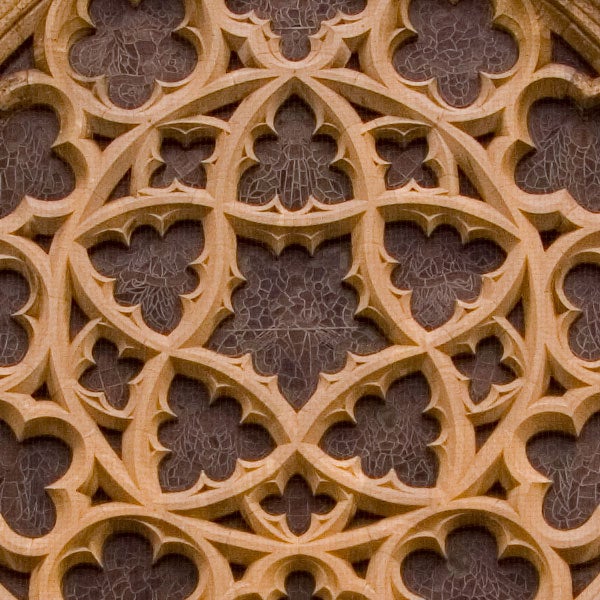 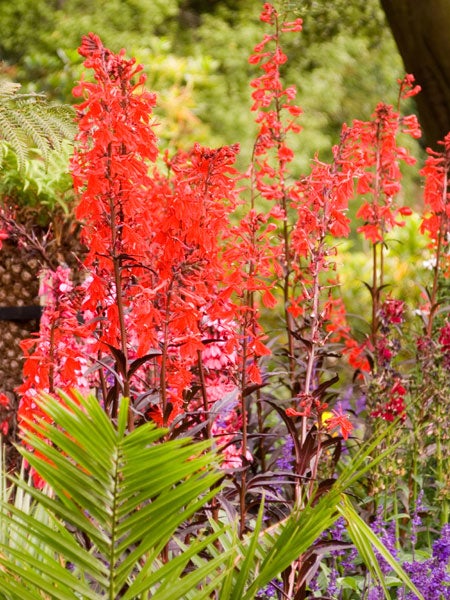 Another RAW mode shot, this time set to high saturation mode, showing the colour response. It’s a little bit over saturated on the red channel. 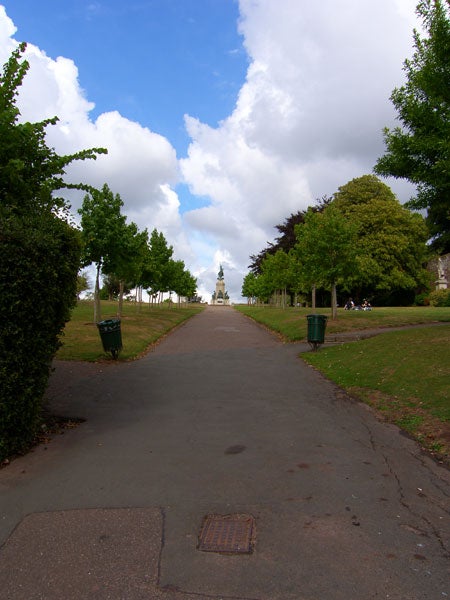 The Pro815’s amazing lens has a wide end equivalent to 28mm, wide enough for panoramic landscapes and wide angle shots. 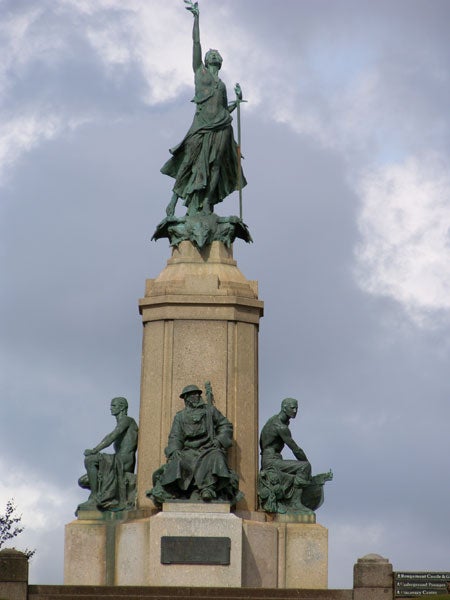 Taken from the same spot as the picture above, this demonstrates the extraordinary 420mm-equivalent telephoto end of the lens. Needless to say I used a tripod. 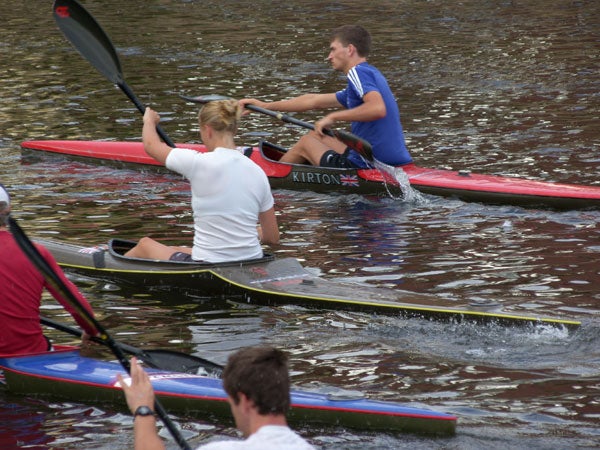 The Pro815’s AF system is very slow, so taking action shots is difficult. By the time the camera has focused, the subject has moved out of shot. 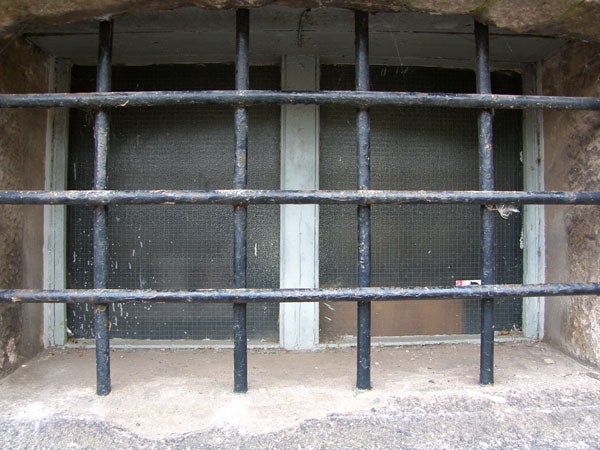 At the wide end of the zoom range the lens does produce a little spherical distortion, but it is very minimal considering the range of the lens. 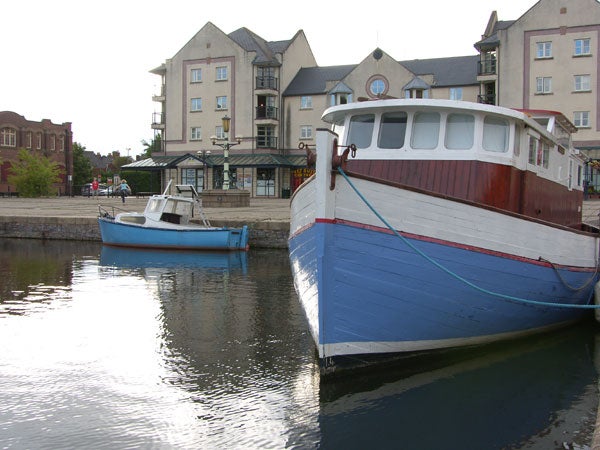 The 815’s larger-than-average CCD produces better dynamic range than most, enabling it to cope with high contrast shots like this one.