The VR9300 has numerous sensors. In addition to the obvious upward-facing camera, it has a raft of front-facing radar sensors, a window with rear and side sensors, and several cliff/drop sensors on its underside. This is a big step up from the old model, with the VR9300 sailing through our standard robot vac tests where its predecessor had more than a few wobbles.

The cleaner very effectively navigated its way around the room as a whole, detecting even narrow obstacles such as thin chair legs. These it would almost nudge but then stop and move around. It did occasionally then gently nudge the obstacles with its rear-end on subsequent turns, but not with any great force. It nudged the bike in the hallway a few times but barely touched it. Its predecessor upended the bike and scurried off dragging several kilos of cycle with it.

Our small drop test consists of a step just 2.5cm tall that often fails to trigger some robot cleaner’s cliff sensors, causing the robot to head off the edge and become wedged. The VR9300 ran up to the edge, turned and cleaned along it with impunity.

The opposite test is our rug-step test, comprising a 2cm thick rug placed on hard parquet floor. While many cleaners see this as a wall and avoid it completely, the VR9300 simply drove up onto it and carried on cleaning as if it wasn’t there.

Likewise, it passed our diagonal wall test with flying colours by simply turning and running along parallel to it. It also ran over loose cables placed in its path without becoming tangled up – again, an area where the previous model failed. If you’re using a robot cleaner, you should eliminate loose and trailing cables anyway, but the VR9300 is clever enough that it’s not a necessity. 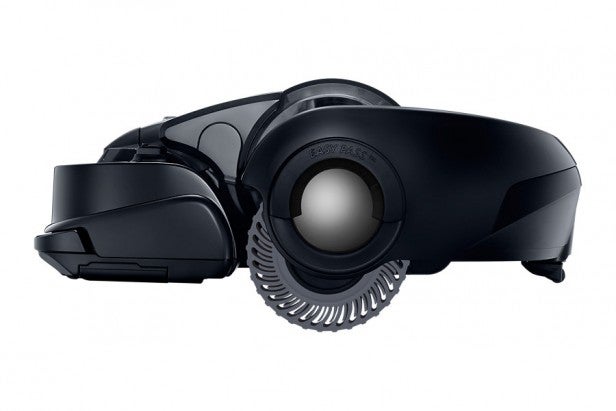 Over the two weeks on test, the VR9300 only had a couple of minor obstacle failures. The first was navigating the metal, domed base of a standard lamp. It’s a really tough test of the navigational abilities of robot cleaners and few have effectually cleaned around it without some misshap. The VR9300 didn’t see it effectively, so it rolled over the edges a couple of times and once ran straight up it, getting stuck.

The second issue was a test trap of a four-legged foot stool placed near a diagonal wall, leaving a gap just big enough for the cleaner to get in but not turn around. Following a few panicked shimmies trapped in the space, the VR9300 switched off and signalled for help.

Both of these issues are designed specifically as robot vac challenges and both can be resolved by repositioning furniture prior to cleaning. What you can’t change is the VR9300’s height, which at 135mm is taller than most robot vacuum’s on the market, and limits its ability to get under some low furniture.

Indeed, the Samsung is actually a few centimetres taller than the Dyson, which is already on the tall side. The VR9300 is also around 15cm wider than the Dyson, so it can’t fit into some of the tighter spaces the Dyson can. As ever with robot vacs, there’s always a compromise somewhere.

Its size might be a problem in some homes, but we can’t fault the Samsung’s navigation, which is one of the best we’ve seen from a robot vac.

A lot of so-called robot vacuum cleaners are often souped-up floor sweepers with less actual suck than a cheap stick-cleaner. The Dyson 360 Eye was the first to offer serious cleaning power, and the Samsung is closer to the Dyson than the underpowered rivals. The VR9300 delivers proper suction power and exceptional air-flow rate. Its Quiet mode (we measured just 69dB) will be fine for hard floors in need of a light dusting, but it’s the Normal (71dB) and Max (74dB) modes that deliver stand-out results.

Set up for its first run on fully automatic room cleaning, the VR9300 moved out from its charge dock with purpose. It ran straight across our powder-covered test rug, delivering the sort of cleaning results that wouldn’t disgrace a decent upright vacuum cleaner.

It produced a clean line through the middle of the powder, leaving behind well-brushed pile. The combination of well-designed brush bar and great suction worked superbly on a range of debris, including pet hair. 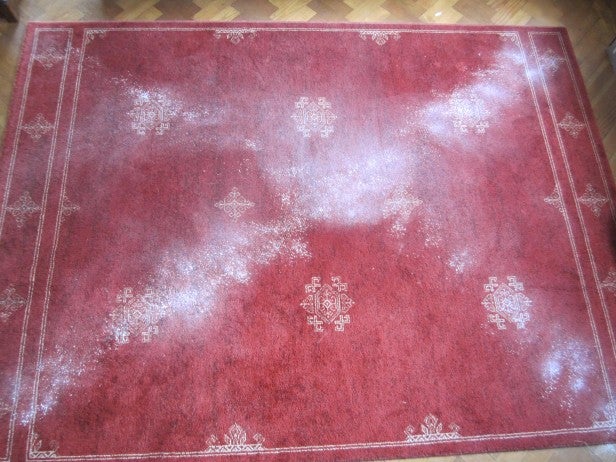 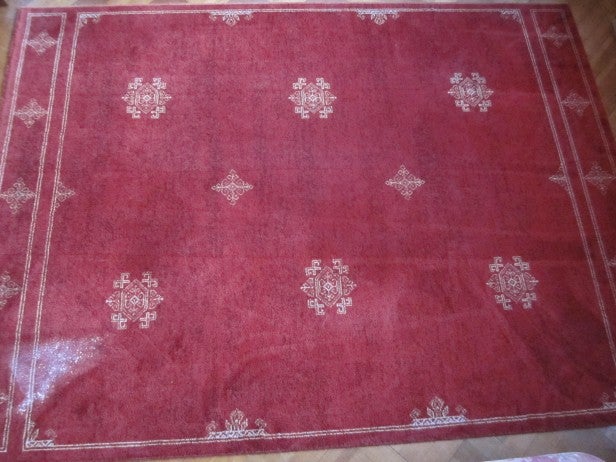 In fact, the VR9300’s performance puts it in a league of two alongside the Dyson 360. At the end of the first cleaning session the central rug was left spotless of both powder and our usual pervasive pet hair, save a very small triangle in one corner that was missed entirely. A few hours of charging later, the VR9300 headed back to the room and cleaned that patch as well.

By the end of its second outing the whole of the hard floor area was addressed thanks to the classy navigation. The four test spills on the parquet were efficiently cleaned, with the bulk of the powder picked up and only very fine powder “stain” left behind on the parquet. Unless you’re in the habit of spilling a mix of static charged carpet cleaner powder and baking powder on your hard floors, this probably won’t be an issue.

Edge cleaning on hard floors was suitably impressive, thanks largely to the cleaner’s outstanding suction power dragging in light debris from the side and front. Dust and fur balls were sucked in with ease and the VR9300’s top-mounted exhaust means that they weren’t simply blown around the room. Approaching room edges square-on, it drives right up to the skirting three times to ensure it’s picked up as much dust as possible. 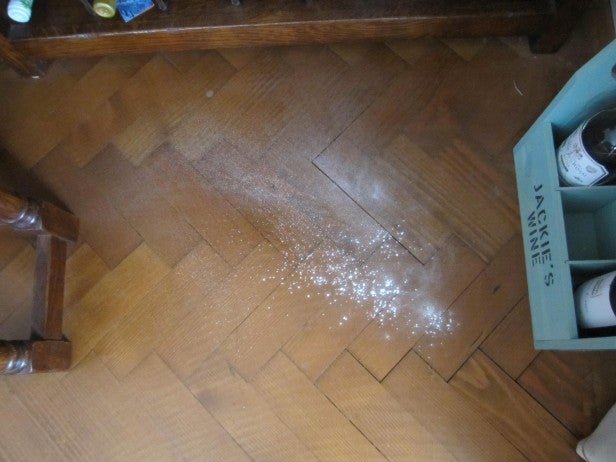 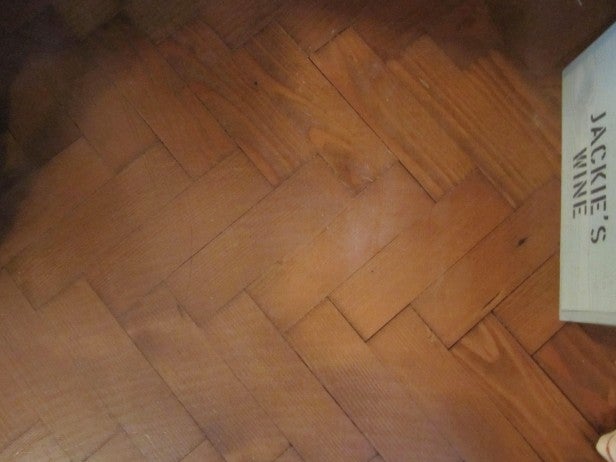 Results for edge cleaning weren’t quite so impressive in fully carpeted rooms, since the brush bar is still considerably shorter than the full width of the cleaner. This leaves a centimetre or so of carpet at the very room edge that wasn’t addressed – although that’s still much better than round-shaped robot cleaners that feature brush bars at their centre.

Observing the VR9300 over several repeated room cleans you can clearly see its dust-sensor features in action. If you run it out on a relatively clean floor it charges around with serious pace, only slowing and increasing power when it detects a particularly dirty area. It will easily complete a fairly clean room within its 25-30 minute run-time, even if you set it to the Max power mode.

In dirtier rooms, with pet hair, dust and walked-in dirt, the Powerbot VR9300 proceeds more slowly and with purpose to ensure cleaning. Sure enough, when the battery starts to wane it heads back for a re-charge (around 3 hours) before picking up where it left off. As is the case with cordless vacuums, little and often is the key to a clean home.

This is one of the key differences between it and the Dyson. The Dyson doesn’t feature any dirt detecting sensors, preferring to stick to a systematic approach. That works well, but Samsung’s approach means it will probably cover a larger area for each full charge.

However, the VR9300’s Achilles’ heel is a result of its own success. In our pet-centric household on a farm, we generate an inordinate amount of floor dirt and there’s no arguing that the Samsung Powerbot is very good at cleaning it up. The 0.7-litre bin is super-small for such circumstances, and the limiting factor to fully automated cleaning is having to empty the bin.

Moreover, pet hair seems to fluff-up in the bin rather than be compressed, so the VR9300 would often down tools and demand to be emptied with nowhere close to 0.7 litres of debris in the bin.

The upshot, in our house at least, was that the first clean of the living room resulted in two stops to empty the bin, pretty much defeating the cleaner’s ability to do its job while you’re not there. A large bin or, better still, a system of compressing the debris to a greater degree would elevate this cleaner’s overall functionality and usability for homes with more challenging cleaning requirements.

Yet, one of the advantages of longer-term testing of products is getting to know how they fare over time and in real-world use. Set up to clean the ground floor daily kept overall dirt down and meant the VR9300 needed emptying far less.

We got into the habit of emptying it once per day irrespective of the dust in the bin. In fact, after a few weeks we realised we were still actively using the VR9300 and it hadn’t, unlike every other robot vacuum cleaner before it, gone back in the box. It has proven itself a properly functional and effective vacuum cleaner, even in our challenging environment.

For flats, apartments and homes without the pet and mud-related dirt chaos here, the robot vacuum cleaner has truly come of age. 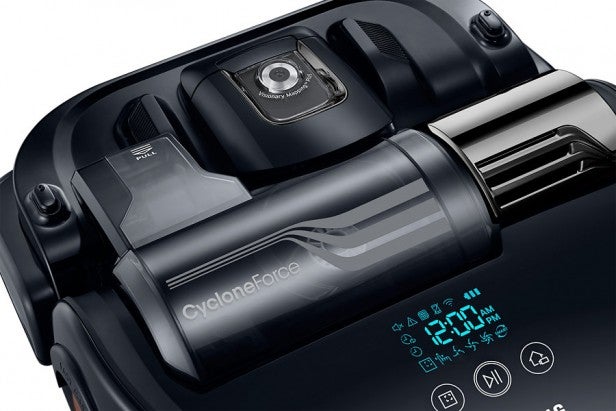 Should I buy the Samsung Powerbot VR9300?

After the Dyson 360 Eye impressed us so much with its cleaning power, we’re pleased to say the Samsung Powerbot VR9300 gives it some serious competition. It offers superb suction power, a very effective brush bar and more flexibility in where it cleans. We love the laser pointer spot cleaning mode.

On the downside, the Samsung is rather large – taller than the already tall Dyson and considerably wider. Also, like the Dyson, its outstanding cleaning makes the small bin capacity more problematic.

Ultimately, it depends on what sort of home you have. If you have plenty of space, the size of the Samsung won’t be much of an issue, and you can really take advantage of its longer battery life. For small apartments, however, you may prefer the compact dimensions and simplicity of the Dyson.

The VR9300 is one of the most effective, genuinely useful robot vacuum cleaners we’ve tested to date. If you have the space, it’s well worth considering.