What is the Samsung Powerbot VR9300?

Bringing “high tech” to automated vacuum cleaning, the VR9300 Powerbot is Samsung’s latest robot vacuum cleaner. It promises the world’s most powerful suction from a robot cleaner – though we imagine Dyson might argue the point – full sensor and visual room mapping, and easy to empty, bagless operation.

The VR9300 can be programmed to clean while you’re out, or you can set it to whizz around using the supplied remote control. It’s wirelessly networked too, which lets you select the areas you want cleaned from your smartphone.

While the previous VR9000 Powerbot was on the chunky side and a little bling with its rose-gold trim. The new VR9300 is still massive (378mm at its widest and 135mm thick) but it has had a serious makeover for the better. It’s mean and moody-looking with an all-black finish and a purposeful gait that could scare small children. This is a robot cleaner that means business. 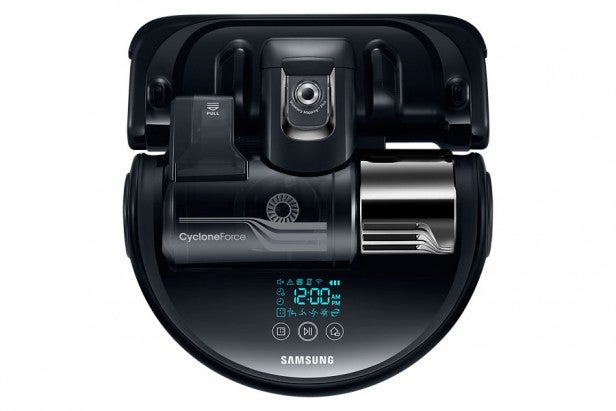 Samsung has opted for a far more powerful motor than previous generations and has fitted it with a three-stage power control. In fully automatic mode it will run around at lower power and ramp up the suction when it detects additional dirt on the floor or in the airflow. This has a huge impact on run-time, particularly if you have pets or kids the place in need of a daily clean.

Claimed run time is stated as 30, 60 and 90 minutes, but unlike cordless cleaners the actual run time doesn’t actually matter. When the VR9300 detects it’s running low on juice, it marks its spot, automatically returns to the charge dock for a top-up and will resume where it left off once it’s charged.

The square front-end is clearly better at addressing square rooms and straight walls than a round-shaped cleaner, such as a iRobot Roomba 880, and the VR sports the biggest robot brush bar on the market. At a whopping 31cm wide, the brush bar features soft and stiff bristles, as well as rubber blades to cover all surface eventualities. Two clips allow the bar to be lifted out for easy cleaning.

Also on the underside of this bot are two front rollers to track floor features, two trolley wheels that allow it to rotate on the spot, and two treaded rubber drive wheels.

Each wheel benefits from a heavily spring-loaded suspension with some 4cm of movement, giving the VR9300 tenacious ability to get over door frames or thick rugs. The wheels also keep the main cleaner body (not the brush) 2cm clear of the surface, so it’s less likely to become tangled up with room junk such as cables. That neatly addresses our two main gripes with the old VR9000. 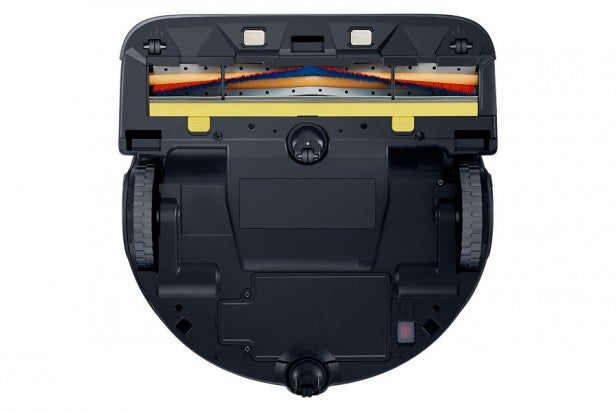 On its sleek top the VR9300 offers a flip-up carry-handle, easily removable 0.7-litre dustbin, three soft keys to control cleaning, and a bright blue display. Towards the front there’s an upward-facing digital camera that maps your ceiling before embarking on the most efficient floor-cleaning route aided by a raft of sensors. These are much improved over the previous model and now detect narrow obstacles such as thin chair legs. That’s another VR9000 gripe sorted.

Also included is a washable filter tucked in the end of the bin chamber, and a spare filter is supplied so there’s no down-time while letting it dry. Other accessories include a rather funky remote control with direction control and an innovative spot-marking laser. Simply aim the laser pointer where you want to clean and the VR9300 duly works its way across to give the area a good going over. The remote also has manual controls for power level and a button that sends the VR9300 obediently back to its dock.

The dock itself is a sleek gloss-black affair with LED indicators, and is designed to sit against a wall. You’ll have to find a space for it, though. When docked, the robot sits a few inches from the wall. Given its already large footprint, ideal placement would be in a corner. I had it under a coffee table. This is where the Dyson has the advantage, as it is narrow enough to be left out in the hallway.

The pack also comes with one of Samsung’s SmartGuard virtual wall generators that can be placed to stop the VR9300 heading into rooms from which it’s banned.

Setting up the VR9300 is somewhat dependent on how deep you want to go with its features. For a quick room clean you can plug it in, charge it up, press Auto and off it will go. If you want to use its scheduled cleaning features, you’ll need to set up the time with a slightly arduous soft key logic. Setting up networking is very much like setting up a networked speaker. You put the VR93000 into Wi-Fi Access Point mode by pressing the clock button on the remote for a few seconds, then connect your smartphone or tablet to the access point.

Diving into the Samsung Smart Home App allows you to connect the robot to your Wi-Fi network by inputting your network password. On first connection the cleaner stayed parked and displayed “UP” – a firmware update in progress. On my snailband internet it took a while before I could start cleaning. 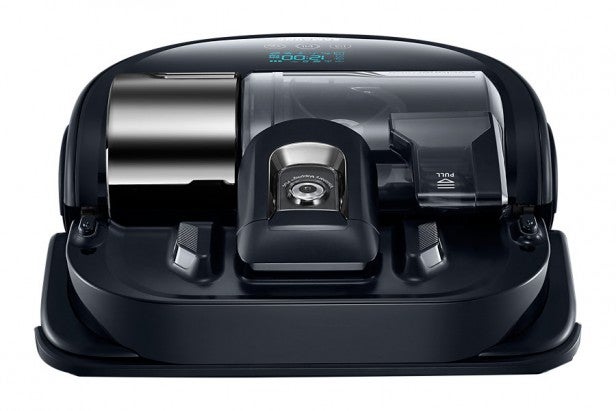 For quick clean-up you can use either the VR9300’s top-mounted buttons or the remote control to set it on Auto, Spot or Manual cleaning. There are three power settings – Quiet, Normal or Max.

‘Auto’ will map the room and begin cleaning until the battery becomes low. It will then return to the charger for a top-up before resuming a couple of hours later. That will invariably be when you least expect it: in the middle of the night, while you’re gripped by a TV drama or, in our case, when the dog is asleep beside it, resulting in YouTube gold.

‘Spot’ clean mode is designed for localised spills. You physically place the VR9300 in the middle of the spill zone, either manually or driving it there with the remote, and it will clean an area approximately 1.5m x 1.5m in a spiral pattern. The suction power rises when it detects really dirty areas and it runs until its spiral-cleaning pattern completes. It then simply stops; if it’s in the same room as the charge dock then you can simply press the home key on the remote and it will mosey on back to base on its own.

‘Manual’ clean uses the remote control cursor keys to steer the VR9300, not unlike a small remote-control car. It isn’t exactly frantic high-speed action but this cleaner doesn’t hang about – this mode is ideal for steering towards dirty areas or pet fluff. 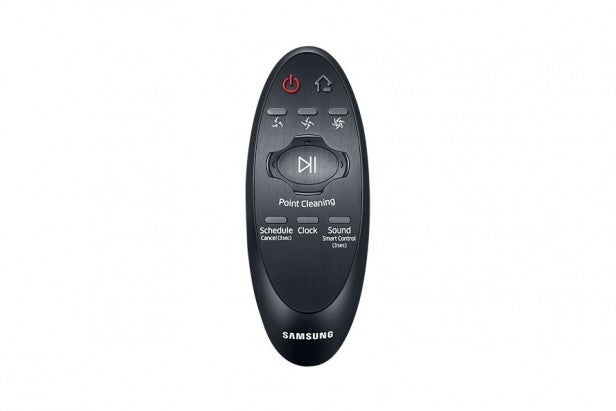 Pressing the down/back key on the remote emits a laser-pointer target. Point this at the location you want cleaned and the VR9300 tracks over to the area and, shimmying around using variable power until the area is clean. Again, this is ideal for patches of ground-in pet hair, crumb spillages or simply chasing the dog. Vacuuming really has never been so much fun.

The basic modes aren’t really what the VR9300 is all about. Not only is it designed to undertake scheduled cleaning tasks by programmed timing, but its networked interface means you can control its every move from your smart device.

The VR9300’s Select & Go interface is part of Samsung’s classy Smart Home App and is delightfully intuitive to use. The main page offers status and battery level information, as well as direct control over the power level and setup for scheduled programming. There’s a comprehensive history page that shows you when, where, what time and on what power it has cleaned in the past, as well as a day-by-day monitor of how much electricity it has used on its energy monitor page.

Fancier still, the app shows you the room layout as seen by the VR9300, creating a virtual floorplan. This is divided into rooms and even sections in larger rooms, all of which can be named, allowing you to specify which room and even which area of the room is cleaned and when.