What is the Samsung Portable SSD T1?

The Samsung Portable SSD T1 is exactly what its name suggests: a portable solid-state drive. Using Samsung’s latest 3D V-NAND technology it packs fast, high-capacity storage into a tiny form factor that you can access using its USB 3.0 connection. With built-in encryption, it’s the perfect way to move large amounts of data between your various computers.

The drive is also smartly presented in its simple but elegant black plastic case. The glossy section is likely to get covered in scratches and fingerprints, but at least the cross-hatch texture will keep the majority of it looking smart. 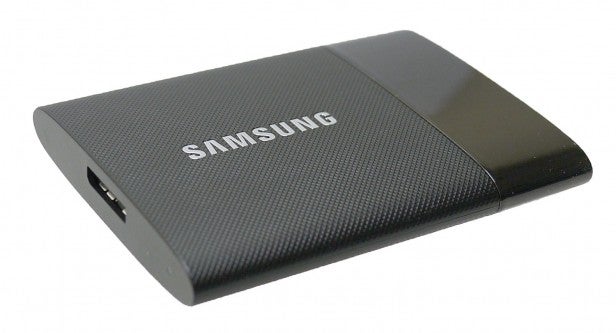 Samsung makes no great claims about the toughness of the case, and there’s a bit of flex if you squeeze the middle, so you’ll definitely want to avoid sitting or standing on it. But otherwise SSD storage is generally very shock resistant, so most bumps and falls should only add to that collection of scratches and not harm your data. A soaking is best avoided, too.

A USB 3.0-to-Micro USB 3.0 cable is provided in the box and it’s a nice short 10cm one that’s ideal for use on the move. We also like that it’s tough and flattened, which means it keeps straight and is easy to grab without it getting snagged.

At this point you may be wondering exactly why you should buy a portable SSD with a separate cable rather than a classic USB stick, and the short answer is: performance. This is a desktop-class SSD packaged inside a portable frame, and as such it can provided lightning-quick transfer speeds, with Samsung quoting sequential read and write speeds of up to 450MBps for the T1 range. That’s about twice what your typical ‘fast’ USB stick might provide.

Along with performance you get capacity, with the SSD T1 available in sizes of 250GB, 500GB and 1TB. You certainly do pay for all that space, with the 1TB unit costing $356.99, but by having a large-capacity drive you can simply store all your files on the T1, without the need to copy them from machine to machine.

What makes the SSD T1 even more convenient is that it comes with 256-bit AES encryption for quick and easy password protection of all your files. This isn’t new as such, but because the encryption is hardware-based it doesn’t impact performance. Samsung’s included software is simple and lightweight, meaning you don’t have to faff around installing and administering third-party software – instead you just enter a password once each time you insert the drive and it’s unlocked and ready to go.

To all intents and purposes Samsung makes the best consumer-level SSDs you can buy at the moment, thanks to its monopolisation of its 3D V-NAND. This has cells stacked on top of each other as well as side by side, greatly increasing data density, making for cheaper, faster, higher-capacity drives.

This potentially isn’t quite fully realised in the SSD T1, as it’s limited by the USB 3.0 connector, which can only deliver 5Gbps rather than the 6Gbps of SATA. Nonetheless, this is still a nippy drive. We tested the 250GB model and it did indeed deliver the claimed 450MBps read speed, just about. Write speed was a little lower at 305MBps when averaged across our tests (tested with AS SSD, and CrystalDiskMark). Also, speed was unaffected by turning on encryption. 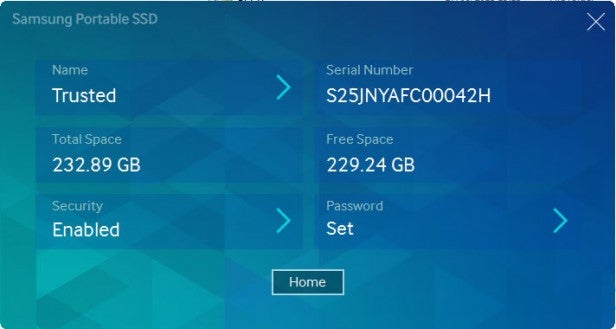 Should I Buy the Samsung Portable SSD T1?

If you need a portable, high-speed, high-capacity drive for moving all your files from one computer to another, there are few faster or more capacious options than the SSD T1. Its performance surpasses almost anything else out there and with it being available in capacities up to 1TB you can store masses of data.

The only downsides are that the drive isn’t ruggedized in any way, so if it does get squished or splashed then you’re likely to lose a lot of data, and of course there’s the cost. Starting at £136.99 for this 250GB model, they don’t come cheap, and while the 500GB model is comparatively reasonably priced at just £228.99, the 1TB model is a whopping £456.99.

There’s definitely a gut instinct that says spending that much on something that’s going to live in the bottom of your bag and could easily get lost is not a good idea. We’d be inclined to get two of the smaller-capacity drives and split the risk.

Some users may also still be happy to buy either a 2.5in or mSATA SSD and use a USB adapter or enclosure instead, this being a more versatile and slightly cheaper alternative. You will miss out on the encryption, though, and it won’t be quite as small or light. In this regard it would’ve been nice to see the SSD T1 offer more practical beneifts to its housing, such as waterproofing, to really mark it out.

Portable storage doesn’t come much faster, lighter, and more capacious than the Samsung Portable SSD T1 line. It’s not cheap, but if you want the ultimate it does deliver.