We are back in 8-megapixel land again with Samsung’s oddly named Pixon, also known as the M8800. Having given Recommended awards to the first two 8-megapixel handsets I’ve seen, Samsung’s own i8510 Innov8 and LG’s Renoir KC910 the Pixon has some pressure on it at the outset. Particularly as I don’t give those awards out very freely.


The Pixon has pretty standard looks for a phone whose front is dominated by a large touchscreen. The Call and End buttons and a round back key are squeezed into a tiny panel along the bottom edge of the front fascia. The predominance of black is predictable enough, and visually there are distinct similarities to other Samsung handsets such as the Omnia i900 and Tocco F480. 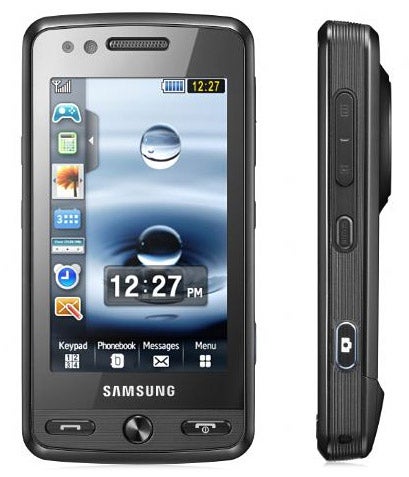 
There is a hold button on the left edge along with a switcher key that’ll call up a grid of six shortcuts. Four shortcuts take you to apps – messaging, the browser, the call screen and music player. The other two shortcuts are a back button and the main menu shortcut.


There is also a microSD card slot on this edge which you can use to boost the 200MB of built-in storage. You get a 1GB microSD card with the phone. Meanwhile, the right edge has a volume rocker which doubles as a zoom manager in the camera, a shortcut key to the photo album and the obligatory camera key.


On the top edge is one of the things I like least about this phone. Samsung’s multifunction port. You use this to administer mains power, connect to a PC and connect headphones. The good news is that the provided headset has a 3.5mm connector just past the microphone so you can substitute your own headphones for the provided in-ear buds if you want to, but I’d have preferred a 3.5mm connector on the phone itself.

The screen and user interface are both lovely. The screen is 240 pixels wide and 400 pixels high, has 262 thousand colours and measures 3.2 inches diagonally. The touch based user interface is really easy to get to grips with. If you’ve used or seen the Tocco you’ll be very familiar with how things work. Samsung provides a stylus but if you are like me you’ll never need it. It attaches to the phone via a lanyard and can dangle around if you want it to.


The main menu screen and the home screen both have a set of four tap icons along the bottom row which provide permanent access to some key features – the keypad for making voice and video calls (the phone supports HSDPA to 7.2mbps), your phonebook (there is internal space for a massive 2,000 contacts), messages and widgets.


Widgets first appeared in the Tocco and they take the same format here as they did there. On the main screen of the phone there is a panel running along the left edge of the screen that you can slide out by tapping its tab. This offers a range of elements you can drag onto the main screen. 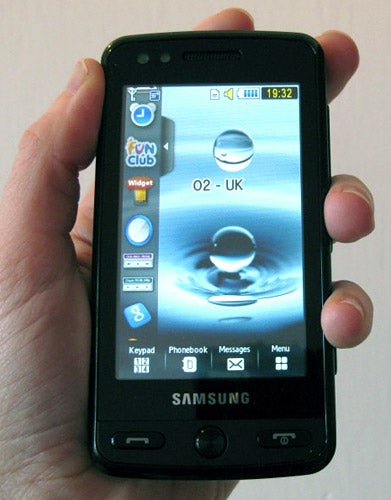 Some go online for information, such as the AccuWeather widget and the Google search bar. Others provide access to resources on the phone. For example there is a widget for controlling the music player, another for the handset’s FM radio. Another gives you access to favourite contacts, and yet another puts an alarm clock on screen. There are plenty more.


It is the 8-megapixel camera which is the headline feature of this phone, though. It sits on the back of the casing and a lens cover sweeps open when you activate the camera software from the handset main menu.


The camera has auto focus, a macro mode, and a dual power LED flash. Shake reduction helps you avoid fuzzy photos, while face and smile detection help you ensure you get good shots of people. There is another feature called Face Link which lets you tag people in a photo and then search for pictures by name. Oh, and as well as sorting photos by face tag you can sort them by time taken and colour. The phone’s GPS antenna caters for geotagging.


The great panorama shooting system I saw in the i8510 is here too. You set this up, take your first shot, then move the camera through the area you want in the panorama and it takes the sequence of photos it needs automatically.

When viewing photos the accelerometer switches the phone between portrait and landscape viewing modes, but, even better, the ‘tilt and flip’ system means you can tilt the phone in your hand to move through a slideshow.


Image quality can be very good indeed. The macro mode proved to be the best element of all. The carnivorous plant was photographed very close up and the individual globs of sticky, insect catching gum are beautifully rendered. The cat gets another look in as an 8-megapixel photo subject. His colours aren’t quite as bright as they were with the i8510 or Renoir but the detail of his fur is nicely captured. 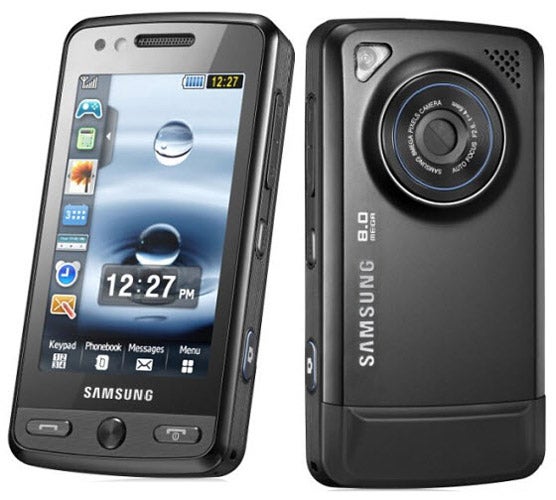 My two standard photos, the coloured dish and the chair are a mixed bag. The dish is sharp and bright, the chair is somewhat overexposed – the sun was very strong on the day the photo was taken. The camera is good, then, but as ever if you really need 8-megapixels then a dedicated camera should beat it every time.


Music playback was not problematic at all, and I got seven and three quarter hours of music from a full battery charge. Samsung says you’ll get 430 minutes of 2.5G talk, 310 hours on standby. I like the Web browser too which can flick into wide and tall modes thanks to the accelerometer, has an easily accessible full screen mode and is amenable to finger panning.


In terms of general usability this is my favourite 8-megapixel handset to date. The Tocco was a super mobile phone, and the Pixon brings it to new heights. 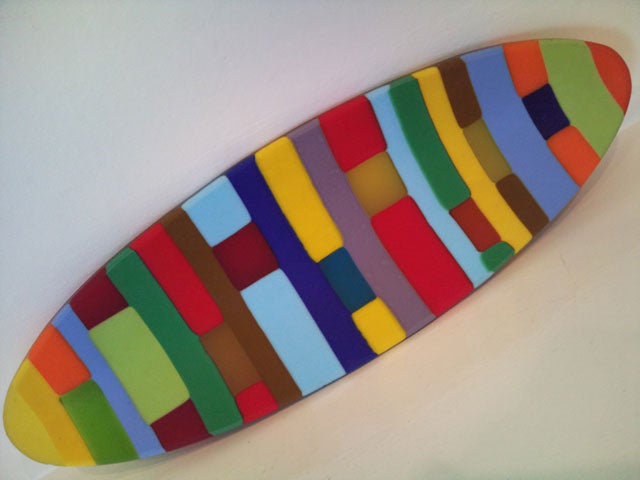 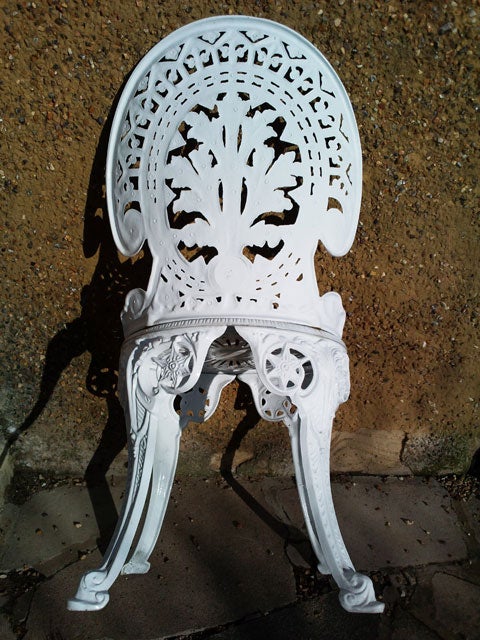 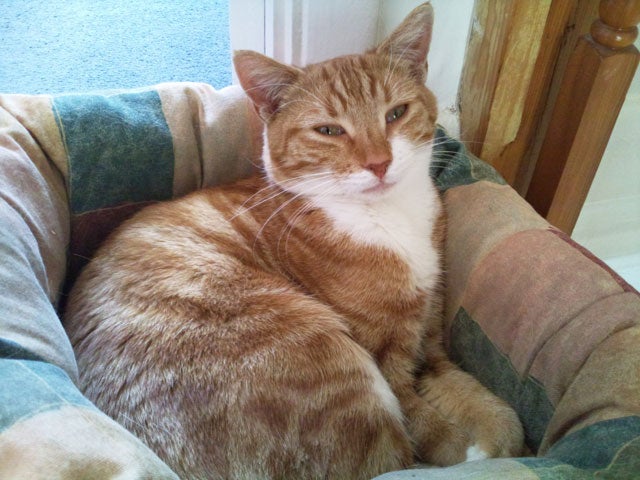 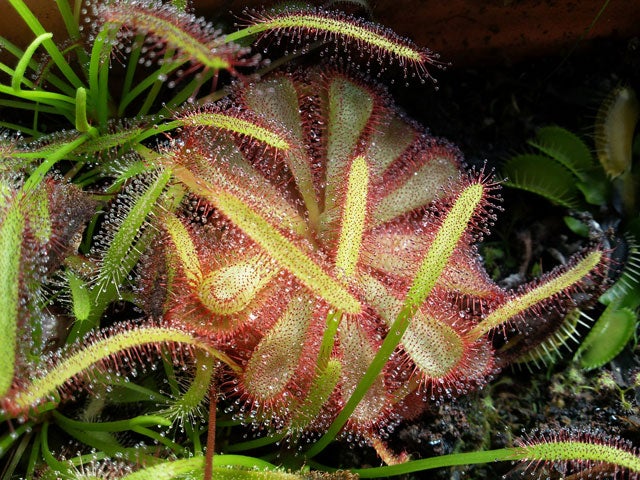