Compared to the consumer-oriented, award-winning R580-JS02UK we looked at in March, the 15.6in P580-JS00UK we’re checking out today is aimed more towards ‘serious’ and business users, as denoted by the ‘P’ standing for Professional. Don’t be put off though: with dedicated GeForce graphics and attractive if understated looks, this is by no means a boring machine. 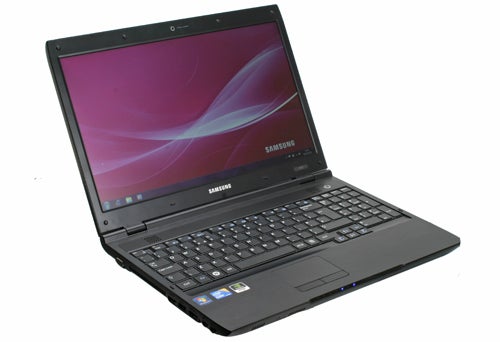 Its elevated status is immediately apparent from its superior finish: rather than the R580’s scratch, dust and fingerprint-prone glossy construction, this laptop features a smooth – almost soft-touch – matte lid and base, with a faux brushed metal palm rest and keyboard surround. It might not catch the eye with as much initial impact, but it’s certainly a major step up in every other regard, and we would be quite chuffed if Samsung were to adopt this kind of finish as a base line across its laptop range.


While not quite up to some of its metal-clad rivals, build quality is good with no obvious drawbacks. Weight is around what you would expect at 2.5kg. 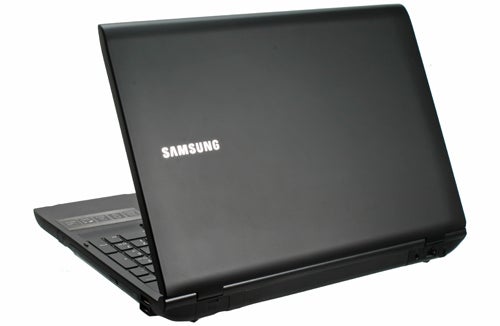 Specifications are pretty decent too. Heading the cast is an Intel Core i3 330M. This dual core CPU runs at 2.13GHz and supports up to four virtual cores, which should give it plenty of oomph for most users. It’s backed by 3GB of DDR3 RAM filling both slots, which is a bit niggardly considering the machine comes with a 64-bit version of Windows 7 Pro. However, for the average workload it’s still plenty to be going on with, especially since none of it will be taken by integrated graphics. Instead, the P580 has a GeForce 330M (to match its CPU model number, naturally) with 1GB of dedicated memory, meaning the occasional bit of light 3D gaming should be possible.


The hard drive is an average 320GB, 5,200rpm model, but it is protected by a sensor system somewhat similar to HP’s 3D DriveGuard, as found on the likes of that company’s ProBook range. Samsung’s equivalent may not feature the magnesium drive cage, but it does boast a sensor that will park the drive heads if it detects sudden, sharp motion, and can withstand shocks of up to 900g in this state. 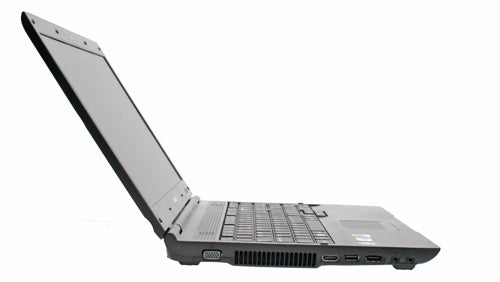 Other business-oriented features include an integrated Trusted Platform Module (TPM) chip and not only the pre-installed version of Windows 7 Professional, but also a downgrade disc with Windows XP Pro and a clean hard drive partition to install it on. Including XP by default is a really nice touch, and will no doubt be a lifesaver for many business users – even the average consumer may appreciate its ability to run older software incompatible with 64-bit operating systems.


Mind you, you may not need its docking station since the laptop itself offers all the basics, including two USB 2.0 ports on each side (unfortunately stuck too close together for some of the ‘fatter’ memory sticks), one of which doubles as eSATA and another offering Sleep & Charge. 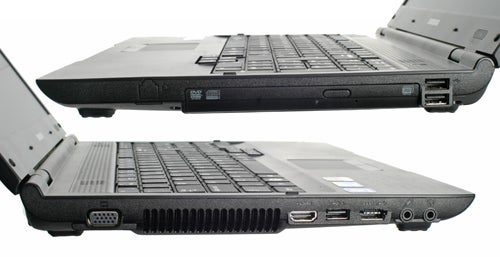 There’s the usual complement of VGA and HDMI for video, with 3.5mm headphone and microphone jacks taking care of both analogue and digital audio. There’s a memory card reader for SD/HC and MMC, a DVD rewriter, Gigabit Ethernet and even a serial port hidden behind a rubber flap for legacy devices.


Finally we have Wi-Fi N and Bluetooth 2.1 for wireless connectivity. Unusually for a business-oriented machine there’s no dedicated wireless switch, but – unlike the more jarring omission of an ExpressCard slot – that’s easy enough to forgive considering there’s a keyboard shortcut. 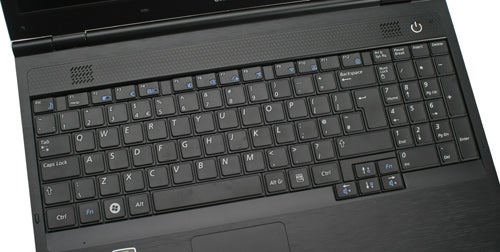 Speaking of the keyboard, it looks identical to that found on the X520 but thankfully doesn’t suffer from the looseness that marred that machine. Keys are large, well spaced and offer good feedback, with crisp action and a decent amount of travel. Layout is superb, with brightness and volume shortcuts on the cursor keys and a secondary function key just above these, making single-handed shortcut operation a doddle.


Likewise, the slightly recessed touchpad is a pleasure to use. Its position means it doesn’t interfere with typing, its smooth surface is pleasant and multi-touch works without issue. Though they feel like the flimsiest part of the P580, the touchpad’s separate buttons are easy to press and offer a distinct click. 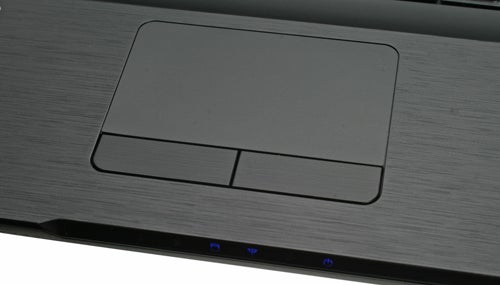 As you would expect from a ‘serious’ laptop, the 15.6in screen features a matt layer rather than the glossy reflection magnets that adorn many consumer laptops. This does result in lower perceived contrast and colours coming across as duller, but especially for business users the trade-off is more than worth it. Resolution is a fairly standard 1,366 x 768.


Image quality is average overall. Viewing angles are mediocre, though this could be considered a ‘privacy feature’. Detail at the darker end of the scale is good but at the cost of white differentiation, which is a common compromise. Combined with uniform backlighting and no noticeable sign of bleed, films are shown off reasonably well – as long as the screen is positioned ideally. Our only other complaint is minor banding which won’t be visible in the majority of scenarios. Excellent sharpness means even small fonts remain legible. 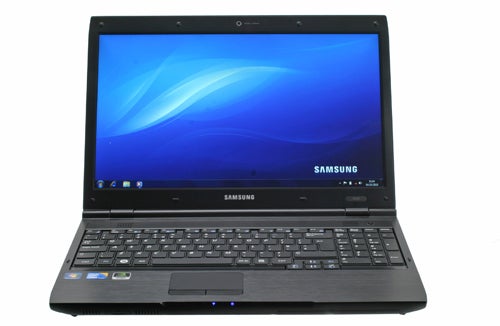 Much like that of its display, the P580’s audio performance is run of the mill. The speakers manage a decent volume level with adequate detail in the high end, but lack of bass means explosions and bass-heavy tracks are on the tinny side. It’s definitely usable but you’ll still get a better entertainment experience from headphones or separate speakers.

Though it lacks Turbo Boost for dynamically increasing its clock speed according to load, the P580’s 2.13GHz Core i3 is fast enough for most tasks, and features Hyper-Threading for virtual quad-core support. As you can see in the graphs, it holds up very well against the Samsung R590‘s 2.4GHz Core i5.

Gaming is certainly possible, with older and less demanding titles running smoothly at the screen’s native resolution with all details turned up. Even advanced games like Stalker: Call of Pripyat can be run at medium detail in DX10, with a playable 34 frames per second average in our standard run-through. The R590’s faster processor makes absolutely no difference here: both Samsung laptops sport identical graphics cards and achieve identical results.

Best of all, under all but the heaviest loads the P580 is virtually inaudible and never gets unpleasantly hot to the touch.


Unfortunately, our largely positive impressions so far are somewhat let down by this laptop’s battery life. Again results are identical to the R590, and though the P580 uses the same capacity 48Wh, 4,400mAh battery, we were hoping the weaker CPU would give us slightly more longevity – besides, short battery life is more forgivable on a consumer-oriented laptop. Doubtless thanks in part to its integrated Intel graphics, the 17.3in HP ProBook 5320m also shows it up rather badly. Still, if you don’t generally spend more than three hours away from a power outlet, the P580 will serve you well.

Samsung doesn’t charge as much of a premium as most manufacturers do for their business machines, and at £660 including VAT the P580-JS00UK is good value. Of course, its P-range does lack extras like a metal finish, fingerprint scanner and the extensive software applications the likes of HP and Dell supply, though you do get a one-year international warranty.


However, the main question is whether, as a business or ‘professional’ user, you’ll need this machine’s powerful 3D graphics, which are responsible for quite a chunk of its price. Admittedly these will also provide genuine speed enhancements for graphics-accelerated applications such as Photoshop, but going the Intel integrated route, you can get a Dell Vostro with a faster Core i5 CPU, 4GB of RAM and a 7,200rpm hard drive for less (albeit lacking the included Windows XP OS).


Samsung’s P580 offers a lot for its price, but it’s not necessarily what business users will want. However, if you fancy some 3D gaming or frequently use graphics-accelerated applications, and can live with its short battery life, this versatile and durable laptop is a good candidate. 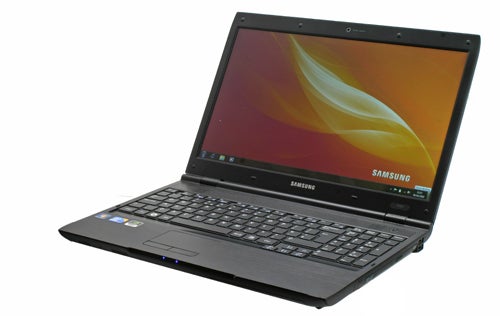