Samsung’s decision to describe this phone as ‘Lite’ is somewhat confusing, as it seems to suggest that the handset is a rather basic offering. However, it turns out that it’s actually quite a feature-rich model that runs Microsoft’s new Windows Phone operating system and has plenty of advanced features like GPS, HSDPA and Wi-Fi.


That said, the handset doesn’t have the standard look of a Windows Phone. It’s rather tall and thin and so looks more like a normal mobile than a smartphone – something that will no doubt appeal to many people. The taller design also means it feels quite comfortable to hold, which certainly isn’t true of some recent smartphones, like the chunky Motorola Dext. Design-wise the phone is also much more angular than recent curvy models from Samsung like the youth-orientated Genio Touch, but this does at least give it a more grown up feel.


The narrower profile of the phone means the screen is a little bit smaller than those that have graced most other Windows handsets. It measures 3in diagonally and has a slightly non-standard resolution of 240 x 400 pixels. This lower resolution means text and graphics don’t look quite as sharp as they should, but at least the display isn’t found wanting in the brightness department. 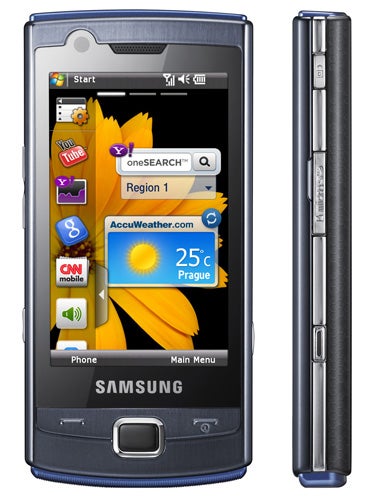 Like the screen, the phone’s stylus is also a break from the norm. Instead of a standard pen-shaped stylus that can be tucked away in the body of the handset, Samsung supplies the phone with a short, triangular two-piece stylus that’s designed to be strung onto the side of the Omnia via the small metal loop at the top of the phone. It’s a rather inelegant solution, but Samsung obviously thinks most people won’t actually bother with the stylus at all. However, having used the phone for a few days, we’re not sure that’s going to be the case.


As we’ve already seen, the handset is built around the latest version of Windows Mobile, or Windows Phone as Microsoft now likes to call it. Obviously Microsoft has given the user interface the once over, updating key parts of it such as the Lock screen, Today screen and Start menu so they’re much more finger-friendly. We’re quite fond of the Lock screen as it makes it easy to quickly check for new messages or missed phone calls, and the updated Start menu is also a vast improvement on what’s gone before.


However, there are still too many occasions when you find yourself in fiddly settings screens that have obviously been designed for stylus rather than finger input and this makes the whole experience come across as a bit disjointed, especially in comparison with the Android or iPhone operating systems.

To further complicate matters, Samsung has added its own TouchWiz v2.0 UI over the top of the native Windows Phone interface. This is the same UI that the company uses on its non-Windows touchscreen phones. It presents you with a home screen that has three separate panels that you move between by swiping your finger from side to side across the display. These home screens can be populated with a range of widgets that you drag and drop from a pop out side bar on the right hand side of the screen. There are widgets for Facebook, YouTube, Weather, music playback and a whole host of other functions. However, some of them are quite limited in their functionality and overall the UI feels a tad sluggish.


As well as this shell, Samsung has also added some extra applications. These include its own video player, which is DivX certified, as well as the Opera Mini web browser, which is still a step ahead of Microsoft’s re-jigged and much improved Internet Explorer that’s native to Windows Phone. 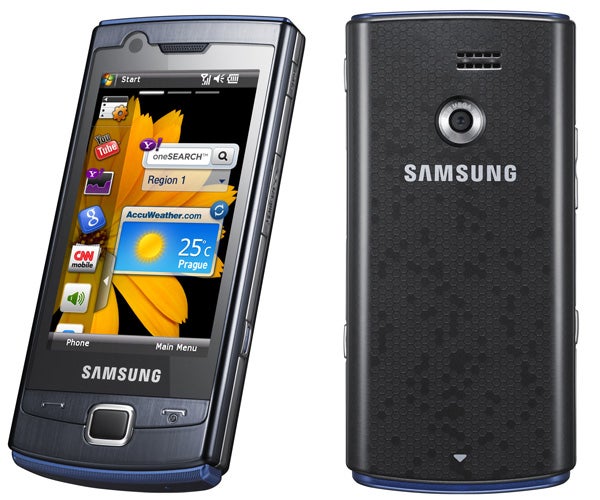 The Omnia runs on a 624MHz Marvell processor, but although that sounds like it could be quite rapid, as ever clock speed is no guarantee of performance. That’s certainly the case here as even though the processor is supported by 256MB of RAM it often feels quite sluggish to use as it seems to pause before performing some actions and with lots of apps open things can get a little bit too much for it. On the storage front, there’s 512MB of ROM for your files and apps, but you can supplement this using microSD cards and the card slot is conveniently placed on the right hand edge of the phone.


Samsung usually tries a bit harder than most when it comes to the cameras on its phones, but sadly the one it’s opted for here isn’t all that impressive. The snapper has a pretty standard 3.2-megapixel resolution and lacks any kind of flash. It does have autofocus but it’s pretty slow to actually grab a snap after you’ve hit the shutter. The resulting photos don’t look too bad as the sensor picks up a decent amount of detail, but shots taken in low light are very graining and noisy.


We had no issues with the phone’s call quality as the earpiece delivers crisp and distinct audio and the mic isn’t too directional. Battery life was pretty much par for the course on Windows Mobile devices, as we got about two days of pretty average use out of it.


The Omnia Lite rather awkwardly straddles the space between a feature phone and a fully-fledged smartphone. Unfortunately, we think it’s not quite easy enough to use to work as a feature phone and the sluggishness and small screen mean it doesn’t quite work as a smartphone either. Overall, it’s a pretty average offering from Samsung.