As we pointed out in our review of the LG Optimus 7, Microsoft has stipulated that phone manufacturers creating devices based on its software cannot change the interface of Windows Phone 7, and there are pretty tight controls on hardware designs as well. As a result, the vast majority of Windows Phone 7 handsets are very similar. However, with its vibrant AMOLED screen, in particular, the Samsung Omnia 7 does enough to stand out from the crowd.

The Samsung Omnia 7 is a fairly elegant device thanks to a mostly clean front design and appealing taupe-coloured aluminium back. However, its squared corners, physical central button on the front, and slightly cluttered back means it isn’t quite as sleek as the likes of the HTC HD7. Moreover, those pointy corners make it less comfortable to hold than some of the competition, and that aluminium back is incredibly slippery.


At least you won’t be worrying about your pocket lining carrying this phone around as at 138g, while not exactly featherweight, it’s none too hefty. With dimensions of 122.4 x 64.2 x 11 mm, it’s likewise large but not too large. 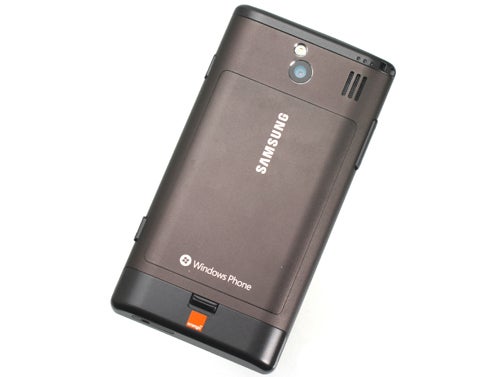 The metal battery cover unclips with a satisfying assuredness to reveal the SIM slot and 1500mAh battery. There is no microSD card, though. While Windows Phone 7 doesn’t support hot swapping microSD cards – for easy file transfers – you can still add permanent extra storage (you just need to completely reset the phone and loose all your data) meaning you can potentially add up to 32GB of extra storage. This phone is available with 8GB or 16GB of onboard storage, which, if you’re at all into your music and see yourself recording some HD video with the camera, we suggest you choose the latter of.


While the central Windows/Start button on the front of the phone may disrupt the sleek lines of the rest of the front (and be a blatant copy of the iPhone), it does have a practical purpose. For some reason, many handset/software designers seem to think people always use two hands to operate their phones so put the screen lock/power buttons out the way on the top edge or the side. If you’re holding a phone one-handed, however, this isn’t at all convenient. The physical Windows button solves this by allowing you to activate the screen while holding the phone in a comfortable position at the bottom with one hand.


The touch sensitive Back and Search buttons are responsive, and we actually found the combination of touch and physical buttons worked quite well (even given our general thoughts that both Back and Search shouldn’t require dedicated buttons with a well designed operating system). 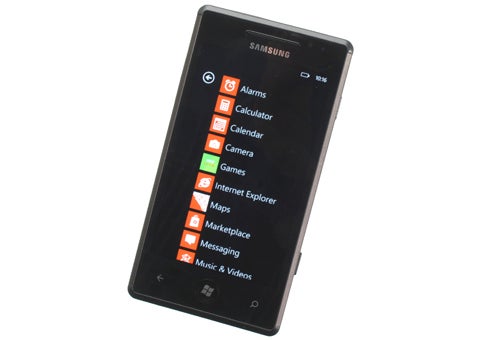 The main power button is on the right-hand side, along with the immensely useful shutter button for the camera. However, there’s a bit of a problem: the power button is very pronounced so is easy to press inadvertently. This isn’t a problem on most phones as you generally have a confirmation screen to ask if you actually want to turn it off. However Windows Phone 7 doesn’t ask permission before powering down so it’s relatively easy to accidently turn off the Samsung Omnia 7 when in your pocket or a bag, even when the screen is locked.

On the opposite side is an equally pronounced, and thus thankfully responsive, volume control while up top is a headphone jack and microUSB socket, along with the ever important lanyard loop. The microUSB socket is hidden behind a secure sliding door that makes for a good compromise between protecting the socket and not getting in the way when you’re actually using the socket, like many such flaps do.

Dominating the front of the Samsung Omnia 7 is its 4.0in AMOLED screen, which is quite something to behold. While it’s the same 800 x 480 pixel panel as on the Galaxy S, the simple and strong colours of the Windows Phone 7 interface really show off its colour saturation, brightness, and contrast to full effect. In the same way, video absolutely shines when played back on this device, as do photos. However, as with the Galaxy S, when it comes to more mundane tasks, like browsing the web and reading email and texts, the screen doesn’t hold up as well as LCD alternatives. 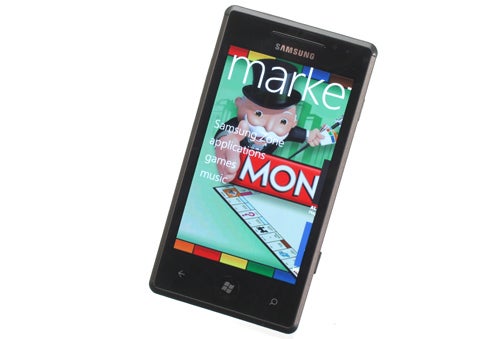 This is due to the pentile AMOLED technology used in the display, which has two primary affects. First, it makes solid colours, particularly white, look rather mottled and fuzzy, and secondly it causes the edges of sharply contrasting objects (i.e. black text on a white screen) to look, again, a bit fuzzy. Some people have no problem with either of these issues at all but some of us find it a constant distraction, meaning we’d take a high quality LCD display, like that of the iPhone 4 or Desire Z, over an AMOLED any day.


You really will have to try before you buy on this front but if you’re happy with other AMOLED displays you’ll probably be happy with this one as well. The screen is also very responsive and supports two-point multi-touch for pinch to zoom and rotation gestures. 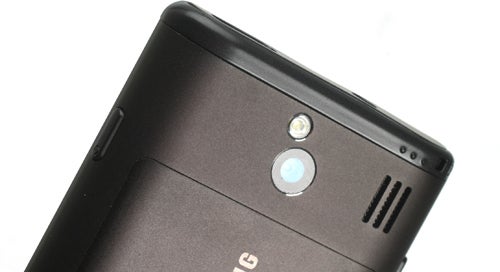 A five megapixel camera sits on the back, along with an LED flash (again, both stipulated as minimum for Windows Phone 7). Thanks to a reasonably speedy and easy to use camera app, along with the convenience of the shutter button, this makes for an effortless point and shoot camera. However, as always, it’s really only in the best lighting conditions that shots are comparable to a half decent proper camera. Otherwise they tend to be grainy and high contrast situations will completely defeat the light metering. Also, while a useful addition, the LED flash has very limited range (a couple of metres at most), and we’d prefer to see a proper Xenon flash (plus an LED for video, in an ideal world).


High definition, 720p video is also available but when it comes to quality, the story’s somewhat similar to photos. In decent conditions it can look quite detail and punchy. However, a slow framerate at full resolution makes for slightly juddery motion, which more or less makes it unusable unless you reduce it to a lower resolution.

Externally, then, the Samsung Omnia 7 is a bit of a mixed bag but is mostly a nice device. However, the real test comes when you actually start using it.


As mentioned, we’ve already extensively covered the ins and outs of Windows Phone 7 so we won’t dwell on most of the basics here. Essentially the big picture is that it’s a pretty slick experience thanks to smooth and speedy operation and a really stylish UI. Extras like integrated social networking for keeping your contacts updated with Facebook and Windows Live information makes keeping in contact with your friends very easy while all the essentials like email, web browsing, and navigation are well catered for. Exclusive tie-ins with Xbox gaming and the Zune music portal also help it stand out from the crowd. What’s more Microsoft has recently announced that its fledgling operating system has already had 3,000 apps developed for it, and you can expect that number to grow rapidly.

However, it still lacks basics like multi-tasking, Adobe Flash support in the web browser, and most ludicrously of all, copy and paste. As such we feel it’s not the first choice smartphone OS of the moment, though will still be an impressive step up for those used to more basic phones who value or more simple interface than Android. 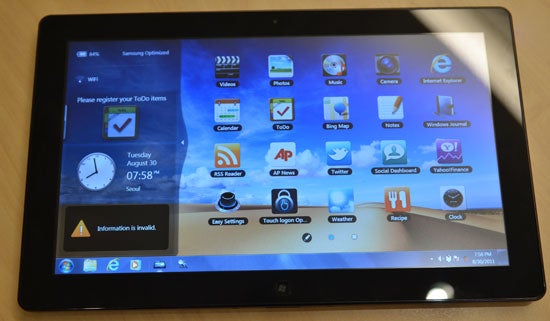 Thanks to Microsoft’s restrictions on tweaking the Windows Phone 7 software, Samsung has added very little to the Omnia 7 with just a few custom apps. The first is Now, which is a simple news, stocks and weather reader, which is okay but bizarrely you can’t change the news feed to anything other than Reuters. 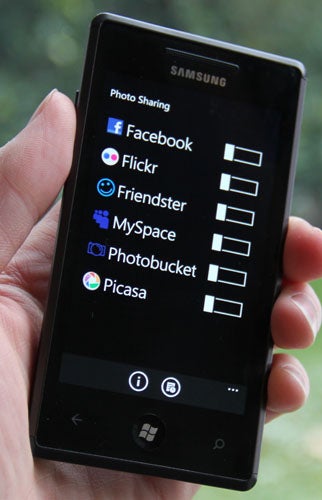 Photo Sharing is the other app, and it’s actually rather neat, giving you a quick way to upload photos to Facebook, Flickr, Friendster, MySpace, Photobucket, and Picasa. You can upload photos straight to Facebook from the standard camera app but this simple uploader makes it really easy to update a whole variety of sites, with you even able to manage which folder the picture goes into.


Making a few test calls threw up no causes for concern with clear audio at both ends. Battery life seemed about on- and possibly slightly above- par with at least two days of average use being easily obtainable. This extra life is probably a direct result of the lack of features like multi-tasking, though, so you pays your money and your takes your choice.


One final consideration is that this phone is exclusive to Orange (most Windows Phone 7 devices are exclusive at launch), though you do seem to be able to get it from HandTec for £481. On contract you’ll be paying £199.99 up front on a £20pm, 24month, contract or you can get it for free on a £35 contract.


The Samsung Omnia 7 is mostly a very nice handset. It’s largely glass and metal construction looks good and feels sturdy, while it packs in plenty of features and has a stunning screen for viewing video and playing games. However, the hardware lacks a certain something in design and is incredibly slippery. Moreover, while Windows Phone 7 is a slick operating system that will feel like a nice upgrade for users used to normal phones, for those used to the full gamut of capabilities available on alternative smartphones, it will feel too limiting.