The Samsung NX300 is the top camera in the Samsung NX range, its popular and innovative Compact System Camera (CSC) series. The previous camera at the top of this range was the Samsung NX20, which is more akin to a DSLR thanks to a chunky hand grip and electronic viewfinder. The Samsung NX300 does away with these features, but on paper it’s still the most impressive NX camera to date.

At the core of the Samsung NX300 sits a 20.3MP APS-C CMOS sensor that, despite bearing the same physical dimensions and resolution as its predecessor, now has an enhanced ISO range of 100-25,600. It also shoots Full HD video at 50, 25 or 24 frames per second in the common H.264 format, making it a capable video camera as well.

The sensor itself has been paired up with Samsung’s DRIMe IV imaging sensor, which the Samsung claims has better image noise reduction and improved colour reproduction than that found in the Samsung NX210 the NX300 replaces. Samsung’s also acknowledged the poor auto focus (AF) performance of previous NX cameras with an entirely new hybrid AF system for the NX300. It pairs contrast detect and phase detect AF, where the former identifies the focus and the latter controls the fine tuning. It’s not a new idea but it works well on rival CSCs, which augers well for the NX300. 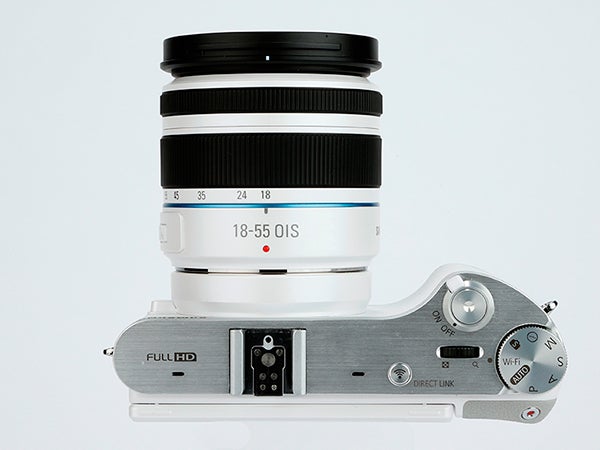 Not content with just Wi-Fi, the Samsung NX300 joins the emerging class of digital cameras with NFC technology. NFC (Near Field Communication) lets photographers share their photos with other NFC enabled devices (e.g. other cameras or phones) simply by touch, and is sure to prove popular as it becomes more widely adopted.

Like the Galaxy S4 smartphone, the NX300 has an AMOLED touchscreen – a 3.3-inch one with a 768k-dot resolution. It’s also hinged, so it can be pulled away from the camera body and rotated about its axis to be viewed from both a high and low angle – a very useful feature for shooting over the heads of crowds, for example.

One excellent feature carried in to the Samsung NX300 from other models in the series is the i-Function button, present on the supplied 18-55mm OIS kit lens. i-Function lets you cycle through common settings (ISO, exposure etc.) that you can then adjust using the focus ring on the lens – a great feature that makes using the NX300 a lot smoother.

As mentioned earlier, the Samsun NX300 is somewhat of departure from the previous design for a top of the range NX series model. While the NX20 before it had DSLR-like styling, the NX300 borrows its looks from its NX210 predecessor. It’s a tad chunkier than the NX210, however, with a good size hand grip that makes the NX300 easy to handle. It strikes a nice balance between the slimmer NX210 and the more traditional NX20.

Build quality is decent, but nothing special. The faux leather front panel adds a sense of refinement, but while other manufacturers are using metal to improve the feel of the camera in the hand, the plastic buttons on the NX300 betray a little penny-pinching. 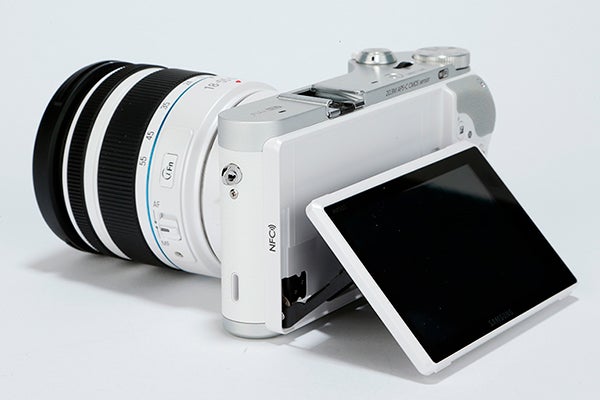 There’s also no built-in flash, but unlike some rivals the Samsung NX300 comes bundled an external flash (the SEF8A0). If you’re looking for a more powerful option you can choose from a range of Samsung external flash guns, too.