What is the Samsung NX30?

The Samsung NX30 is the Samsung’s latest enthusiast CSC. It borrows several features from previous NX models, including the same 20MP resolution as found in previous models. However, the NX30 offers some eye-catching innovation with DSLR styling along, a top-class LCD, EVF and a wealth of advanced connectivity features, some of which are unique to it. 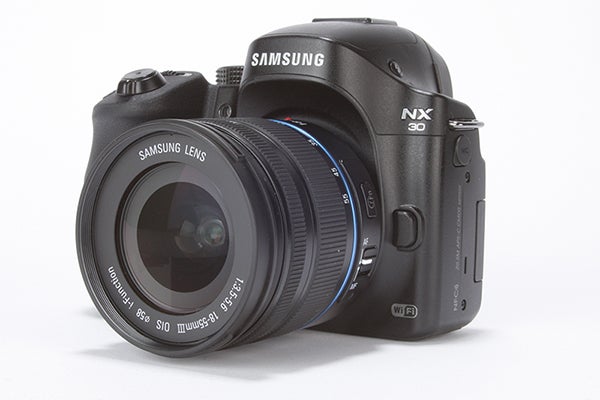 Samsung’s expertise in consumer electronics really benefits the NX30. First there’s the LCD display – a 3-inch Super AMOLED touchscreen with a resolution of 1,037k dots. The monitor’s refresh rate is fast and the range of colours is fantastic. Equally useful is the ability to move the LCD 180° to the side as well as up and down 270°. The 2,358k-dot electronic viewfinder features a unique 80° tiltable eyepiece. With an equally impressive refresh rate, vast display of colours and great contrast it’s of as high a standard as the LCD.

Video is possible with a maximum resolution of 1920 x 1080 in either 60p or 30p. Lower resolution video is also possible in a variety of frame rates and sizes, including web-optimised 30-second video.

The sensor inside the body is an APS-C CMOS version (23.5 x 15.7mm) with a resolution of 20.3-million-pixels – again the same as in the Samsung Galaxy NX and the NX300, and others. The next-generation DRIMe IV processor the camera is equipped with allows a speed of 9fps in full-resolution JPEG or raw format. Our only gripe is that it can take a couple of seconds to process the files and the camera’s buffer is filled quite quickly. 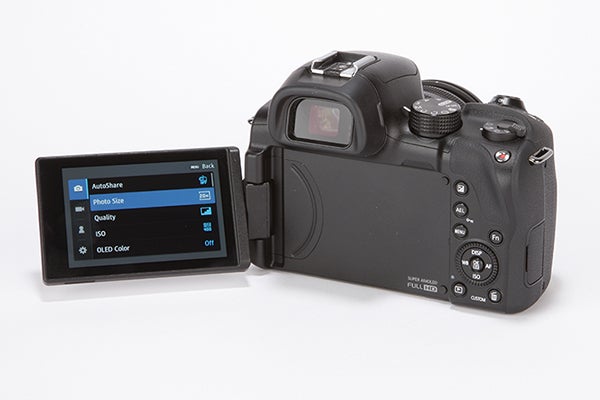 Wi-Fi and NFC are present and you can connect to their smart device via the free Samsung Smart Camera app, which is available for both IOS and Android, and, of course, shoot remotely, preview, download, or upload images.

There are other, unique, connectivity based features, such as the ability to connect to the internet from a Wi-Fi hotspot without the aid of another device. Images can be uploaded directly to social networks – such as Facebook – or the popular colour storage service, Dropbox via a pre-installed app. This is the first camera-specific device to allow direct-to-dropbox uploading. Also featured is AutoShare which automatically sends each photograph to a smartphone or tablet in a pre-determined resolution which, by default, is 2-million-pixels.

The AF system carried by the NX30 is Samsung’s Advanced Hybrid Autofocus System. It uses 105 phase-detection and 247 contrast-detection points and is the same as found in the NX300 and Galaxy NX. 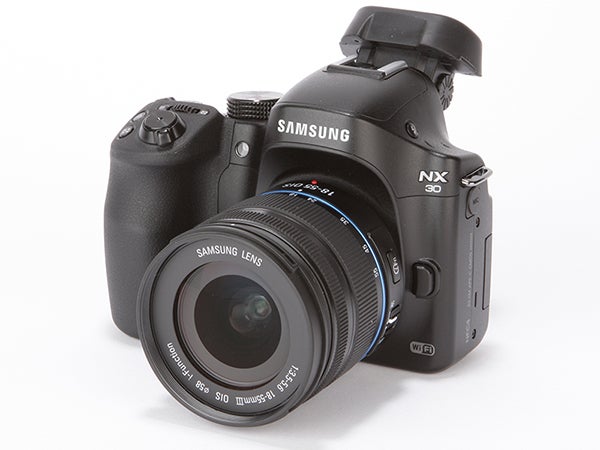 The white balance menu contains 10 settings. These are Automatic White Balance, Daylight, Cloudy, Fluorescent White, Fluorescent NW, Fluorescent Daylight, Tungsten, Flash, and Custom. There is also a setting that allows the colour temperature to be set manually. All can be adjusted for correction or artistic effect, while the bias between amber, blue, green and magenta can also be adjusted. The camera’s TTL metering system is comprised of 221-segments (17 x 13 block segment) and offers centre-weighted, spot and multi metering.

A nice touch is the inclusion of the full version of Adobe’s well-regarded editing software, Lightroom 5, which costs £102.57 direct from Adobe. The NX30 also has a neat Picture Wizard menu containing nine presets and three custom settings to set image styles such aa Retro, Landscape and Vivid. These can be adjusted for colour, saturation, sharpness and contrast.