While still only really a few years old, competition within the compact system camera market has already grown pretty fierce. As a result manufacturers have had to work ever harder to stay ahead of the competition and capture the imagination of consumers. One of the main ways they have done so is by introducing new and exciting features to their CSC ranges. Samsung has been very much at the forefront of this approach, and the Samsung NX20 is a primary example – it’s the first CSC to include Wi-FI. 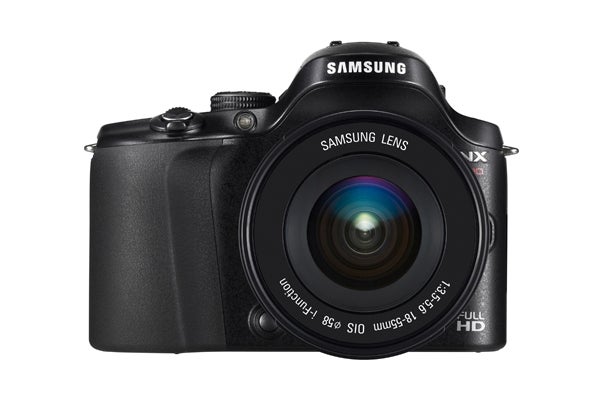 This built-in connectivity allows you to connect your digital camera directly to a wireless network without the need for a computer or any leads. Once connected you can choose to upload your images to a number of social media sites (including Facebook), email them directly to friends or family, and even back them up to a cloud-based storage service. Camera manufacturers have been rather slow to incorporate Wi-Fi connectivity into cameras and while Canon and Nikon offer optional Wi-Fi accessories for their latest DSLRs, the NX20 remains the only camera within its class to offer it as a built-in feature. But how popular will it be and is it enough to elevate the NX20 above the competition? Let’s take a closer look and find out.

The NX20 takes over from the 18-month-old NX11 as the DSLR-like model within Samsung’s expanding range of compact system cameras. At its heart it employs the same 20.3MP APS-C CMOS sensor that was found inside last year’s NX200, and which represents a fairly sizeable jump in resolution from the 14.6MP sensor of the NX11. Incidentally, Samsung has also fitted the same sensor inside the NX1000 and NX210 models that were launched alongside the NX20.

An increase in resolution isn’t the only upgrade the NX20 enjoys over the NX11 though. Sensitivity has been increased to ISO 100-12800 – two stops higher than the ISO 100-3200 offered by its predecessor. Continuous shooting speed has also been boosted to a highly credible 8fps (up from 3fps on the NX11), while shutter lag has been reduced to 40ms. Maximum shutter speed is also up, from 1/4000 to 1/8000sec. 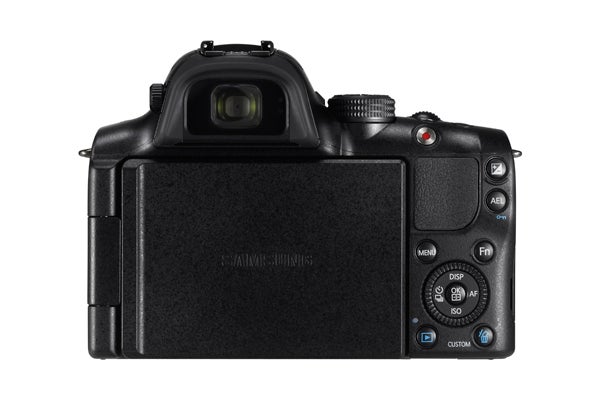 Another improvement comes in the form of the 3in, 614k-dot monitor, which is now articulated for added flexibility. It’s attached to the camera via a side hinge, which makes it possible to pull the screen out from the body by 180-degrees from where it can be rotated through 270-degrees to make light work of shooting from acute angles, or for easy self-portraits. The screen itself is of the AMOLED type, with no air gap between the display and protective glass enabling it to produce deeper blacks and more vivid colour as well as reducing unwanted reflections.

Should you want to use the camera at eye level then the NX20’s electronic viewfinder is one of the best going, offering 100% coverage with an impressive 1.44 million-dot resolution. Thanks to the built-in eye sensor there’s no need to use a button to toggle between the monitor and the EVF either; simply lift the NX20 to your eye and the EVF will switch on automatically.

The NX20 offers a good range of semi- and fully manual exposure modes including the standard quartet of Program, Aperture-priority, Shutter-priority and Manual (PASM) exposure modes seen on DSLRs. These are joined by a SmartAuto scene recognition mode and 17 individual Scene modes that include a useful Panoramic mode along with a 3D mode. You’ll need a 3D compatible screen to view the results on if you shoot in this mode though, as the NX20’s AMOLED screen is strictly 2D.

As with other recent Samsung releases, the NX20 also offers the same i-Function 2.0 functionality that allows you to adjust a number of commonly used shooting settings using a button located on the side of the lens. Better still, the i-Function button can be customised to your own preferences, so you can use it for anything from cycling through the camera’s built in Smart Filters to activating the intelligent zoom (i-Zoom). 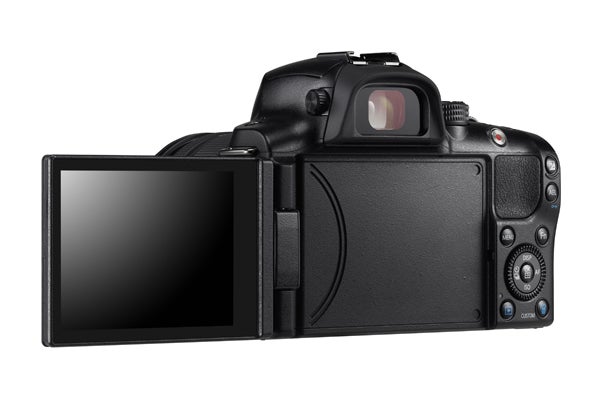 Movie enthusiasts are well catered for with the ability to record 1080p Full HD videos at 30fps, backed up by 720p HD recording alongside VGA and QVGA standard definition options. Those looking to take a bit more creative control will be pleased to know that it’s also possible to use any of the PASM exposure modes while recording video. Sound is recorded in stereo with resultant movies stored in the .MOV (H.264) format.

In terms of design the NX20 very much follows the template of the NX11 with a miniaturised DSLR design. Weighing in at 341g, it’s actually about 30% lighter than the NX11 and comes with a redesigned handgrip that can accommodate four fingers for improved handling and comfort. A textured thumb rest is found on the back of the body, which aids the overall grip. Overall, those with average sized hands should find it a very comfortable camera to hold.

That said, those with larger fingers may find the NX20’s relatively small buttons slightly fiddly although they are all quite well positioned and easy to reach. In addition to the i-Function button situated on the lens, there’s also a basic Function (Fn) button on the back of the camera, which comes in handy when you want to quickly change image quality, ISO settings and suchlike without having the enter the main in-camera menu. Speaking of the in-camera menu, the NX20’s is split into five main categories: Camera, Movie, Custom, Settings and GPS. It’s all very clearly laid out and easy to read making for quick and intuitive navigation.

One further area that the NX20 has seen significant improvement over the NX11 is with the electronic viewfinder. Whereas the NX11’s electronic viewfinder offered a perfectly useable resolution of 921k-dots, the NX2’s 1.44million-dot display produces an image that is much crisper and sharper, which in turn vastly improves the user experience when the camera is being used at eye level. The eye sensor responds quickly too, although we did find that it is slightly quicker at switching between the EVF feed and the rear monitor when pulling the camera away from your eye than when lifting the camera to your eye. 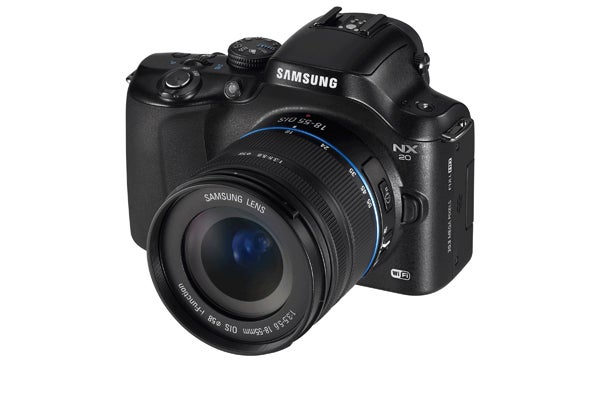 Autofocus performance is generally pretty good, with the NX20’s contrast-detect AF system able to quickly lock on to subjects in good light. When light levels fall below its unassisted abilities then a bright greem AF-Assist light can be called upon to light up nearby subjects with, although when using it during testing we found that we occasionally had to half-press the shutter button twice for the camera to fully lock on. Our main gripe with AF operation is the inability to position the AF point to the far corners of the frame – something that we know can be done and is a feat that Panasonic first accomplished on the GX1.

Wi-fi connectivity is where the NX20 really scores well. The whole process of connecting and then either sending or sharing your images is rendered very simple and intuitive. Simply turn the mode dial to Wi-Fi and, so long as there is a network within range, follow the on-screen prompts. Of course, having to use the D-pad to input your details isn’t the most convenient, but thankfully the camera is able to remember your details so that when you return to a password-protected network (or social media site) that you’ve already logged on to you can simply call up your stored details via a drop-down menu.

Of course, social networking sites aren’t the only application for the built-in Wi-Fi and you can also use it to email your images directly from the camera, or to send them to your home computer or a cloud-based storage service. One further Wi-Fi feature of note is the ability to use your smartphone as a remote shutter release for the NX20. You’ll need to install the remote viewfinder application from the Android market first, although thankfully it’s free.

The NX20 continues the trend for Samsung compact system cameras to deliver very good overall image quality. Metering is consistently spot-on, producing balanced exposures, even when faced with the kind of tricky, high-contrast light that can all-too-easily fool many otherwise competent metering systems. Of course if you are able to shoot in Raw then you will have far more leeway to recover clipped highlights or to bring out underexposed shadow detail.

Colour and tone are both very good, with the NX20 consistently able to deliver lifelike images that deliver plenty of punch. If you prefer not to have to post-process your images yourself then the NX20 can be relied upon for consistency. If, on the other hand, you’re looking for a camera with lots of digital filters that can be used to add something to your images then it has to be said that the NX20 lags a little behind many of its rivals and while it does have a total of nine Picture Wizard effects (including ‘Landscape’, ‘Forest’ and ‘Retro’) you won’t find any of the ‘Selective colour’ or ‘Miniature’ effects that are so popular elsewhere. 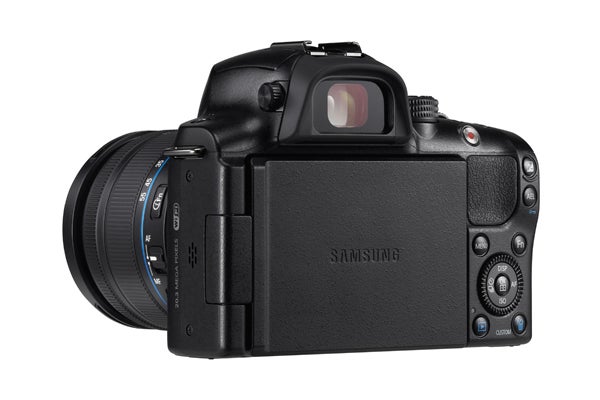 As might be expected the NX20’s 20.3MP CMOS sensor is able to resolve plenty of fine detail while image sharpness is also very good. Noise is handled at the low to mid sensitivity settings of ISO 100 to 800, but does make itself known above this, especially when images are enlarged or viewed at 100%. Thankfully, there’s no shift in colour up to ISO 3200, although at ISO 6400 and 12800 images do show a slight magenta cast.

Verdict
The Samsung NX20 is the first compact system camera to offer built-in Wi-Fi connectivity, but that’s far from the only reason to consider it. Its EVF is a vast improvement over Samsung’s previous efforts, the vari-angle LCD monitor is immensely useful, and overall image quality is excellent. On the downside, autofocus performance could be better in low-light and we’d also like to be able to position the AF point in the corners of the frame. At £899 with the 18-55mm kit zoom the NX20 is also one of the most expensive CSCs available, more so than many mid-range DSLRs even. As such, you could easily make a decent saving opting for an entry-level SLR, and lose nothing in performance. But, if you’re dead set on something smaller then the NX20 is worth waiting for – a couple of months and its street price should hopefully be more competitive. 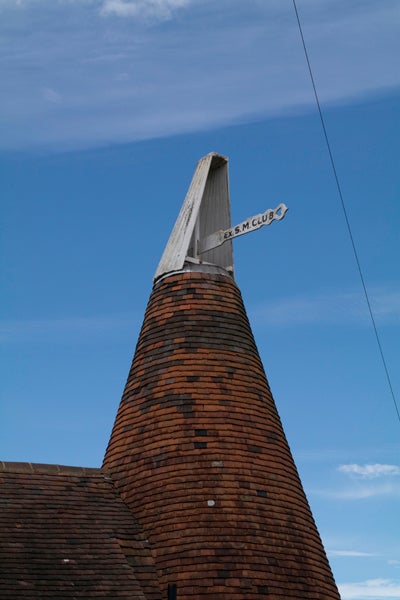 Above is the
full ISO test scene. The
following are all 100% crops. 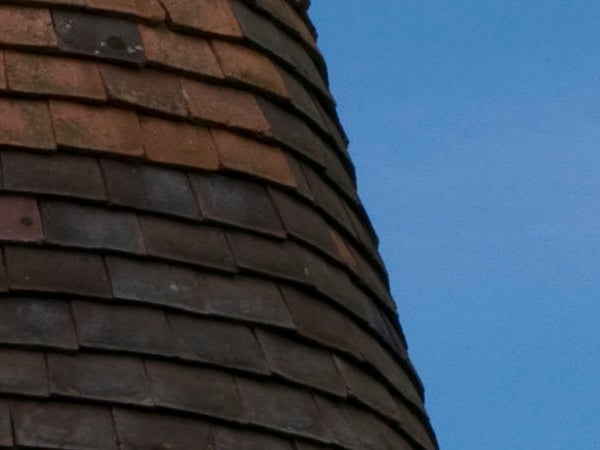 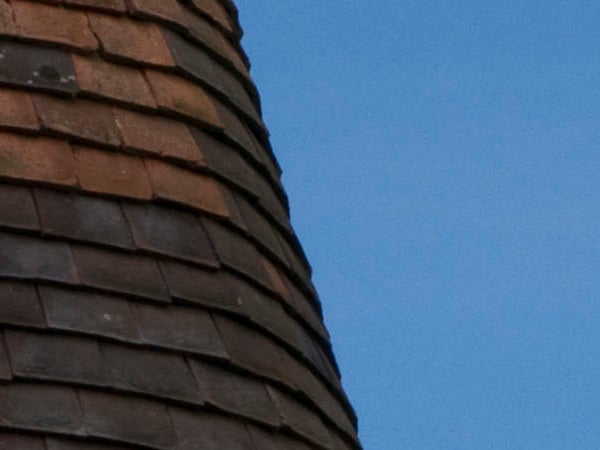 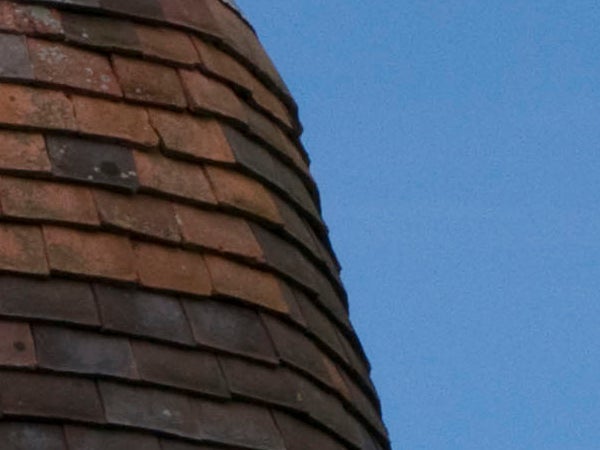 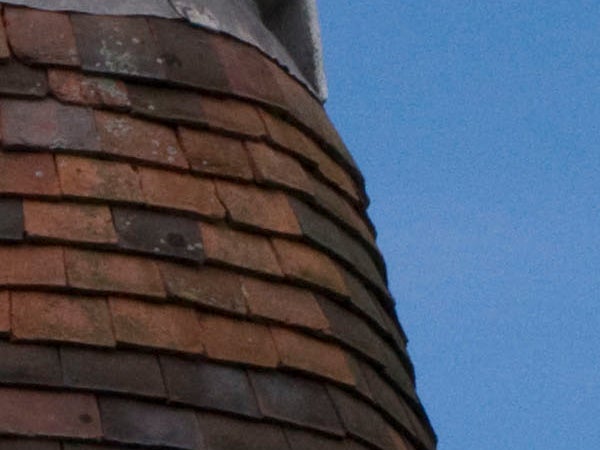 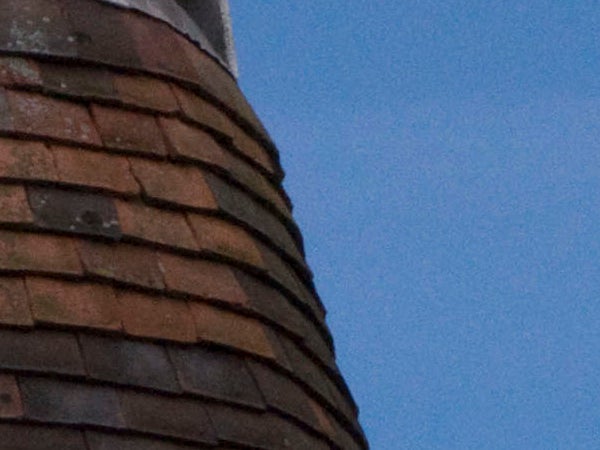 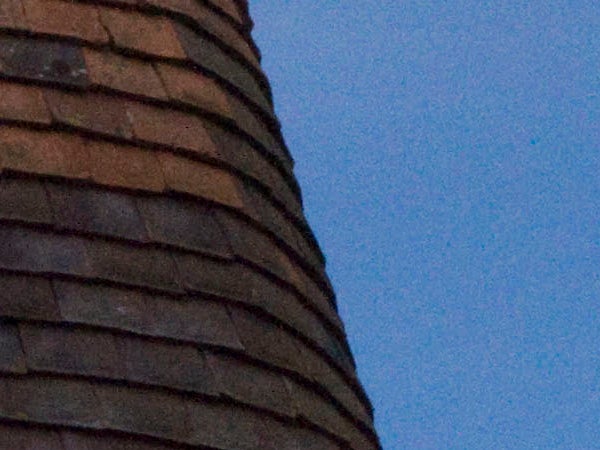 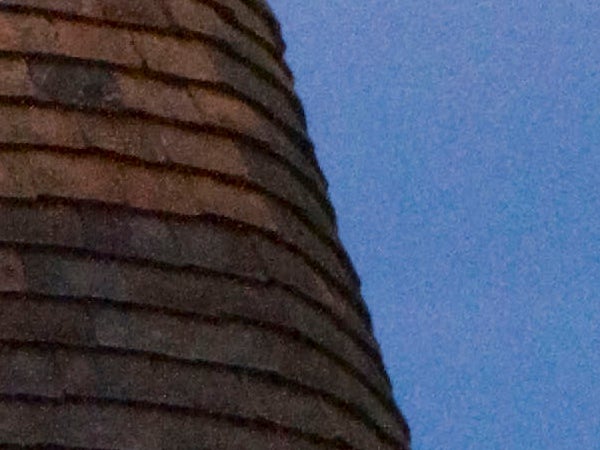 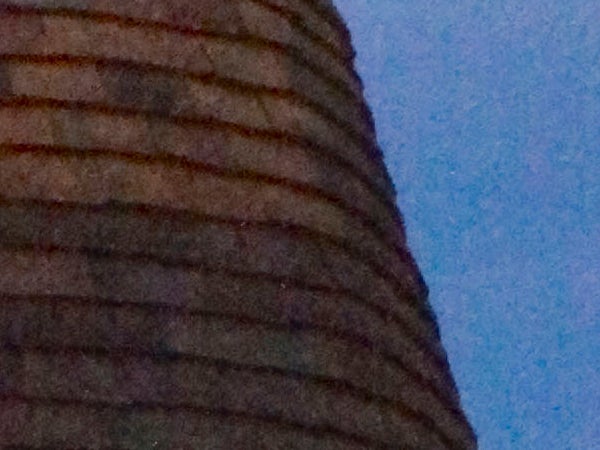 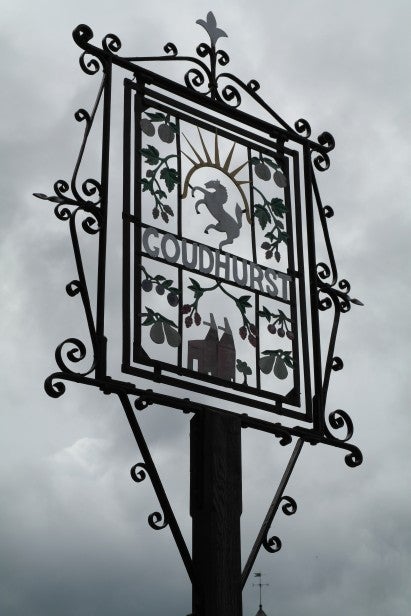 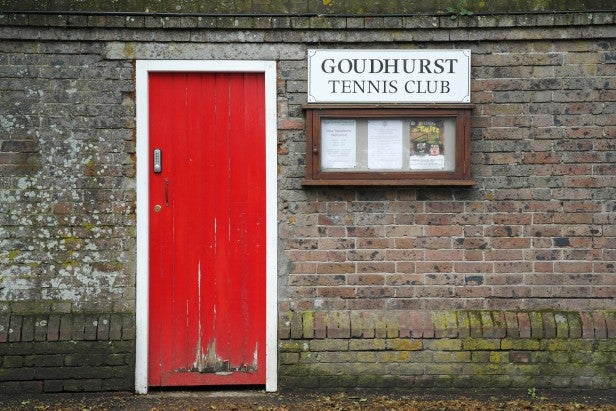 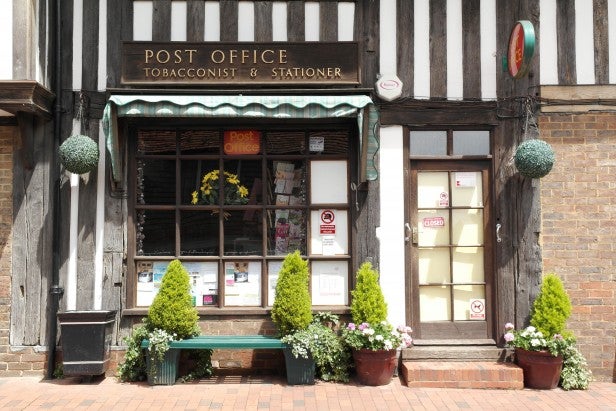 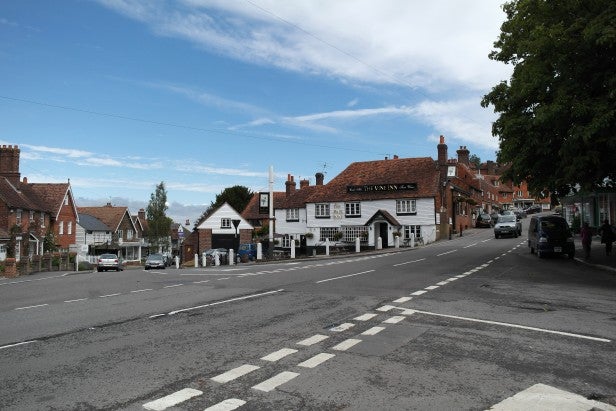 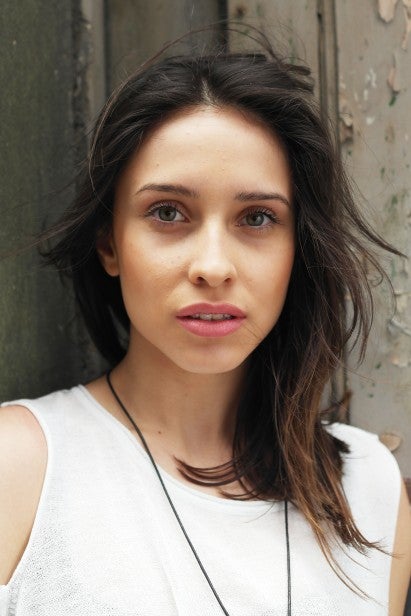