The netbook market is shrinking, thanks to the rise of tablets and the lowering price of smaller 11.6in and 13.3in laptops, but netbooks still have their place. We’d much rather tap out an email on a keyboard than an iPad touchscreen, so devices like the Samsung NS310 make sense to us. It’s a 10.1in screen netbook, the bog-standard size, but has a much bolder design than most. And, unlike almost every other netbook out there, it has a backlit keyboard.

The entire outside of the Samsung NS310’s body is covered in a high-gloss, metallic finish. So intense it’s almost sickly, this should appeal if you find black and silver computers endlessly boring. Two colours are available, an alluring dark red and a brighter blue. Our review sample had the more fetching red body. On the top of the lid is a large embossed Samsung logo. The NS310 wants you to know who made it. 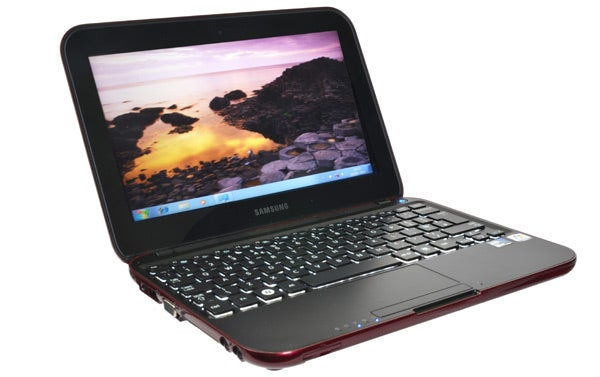 Open the netbook up, though, and the styling calms right down. Vivid colour is traded-in for pure black – fingerprint-resistant matt black for the keyboard area and glossy black for the screen surround. Simple and smooth apart from a strip of indents by the speaker grilles above the keyboard, we can find little to dislike about the NS310’s inner design. It is, of course, the outer bodywork that defines the look of the unit though, and some of you may be turned off beyond reparation already. 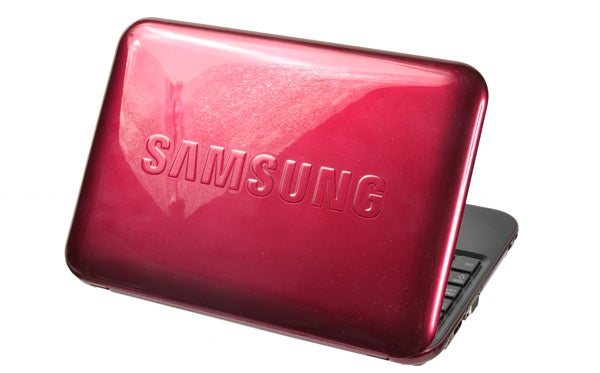 On-body connectivity is entirely unremarkable. There’s a VGA output to connect to a monitor, three USB 2.0 ports, an Ethernet port, Kensington lock port and 3.5mm headphone/microphone jacks. There’s also an SD card socket on the fron but lacks an HDMI output, and there are no USB 3.0 ports. 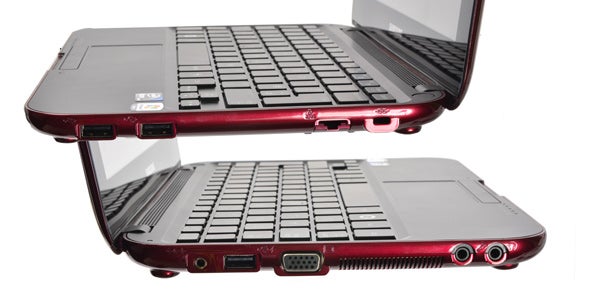 The only kind thing we can say about the NS310’s sockets is that some netbooks offer fewer USB ports. Other than that, we’re unimpressed, especially as it retails for over £300 from most retailers – enough to buy you a far more powerful 15.6in laptop. Part of the original attraction of netbooks was that they were cheap, but this one is not particularly budget-friendly.

For the money, you get above-average build quality. There is some creak and flex to the plastic bodywork, but it’s otherwise a solid device. No case is included, and you’ll want to grab yourself one unless it’s going to spend its time in a dedicated laptop bag – that shiny outer finish won’t look nearly as good once it picks up a few scratches and scrapes. And if you don’t care at all about that finish, you should probably be looking at a cheaper, less intensely styled model. At just over 1kg in weight, it does have that all-important portability factor, though.

The on-body connectivity of the Samsung NS310 doesn’t impress, and the internals are nothing to special at the £300 mark either. Wi-Fi n and Bluetooth 3.0 are on-board, but the core Atom N550 processor and 1GB of RAM are found in much cheaper netbooks, such as the Acer Aspire One D255 and Samsung’s own NC110.

There’s a 250GB hard drive inside, and the laptop runs Windows 7 Starter edition, a version of the OS designed for less powerful devices like netbooks. The NS310 needs a win, and it gets one thanks to its keyboard. Its chiclet design looks great within the sultry black interior, and while – like all netbook keyboards – it will feel a little small if you’re used to using a desktop PC, the action feels top notch. Definite and entirely non-spongy, it’s a joy to type away on once you get used to its various cut-size keys. This does take a while though – we found the tiny Shift and Tab keys particularly hard to swallow at first. 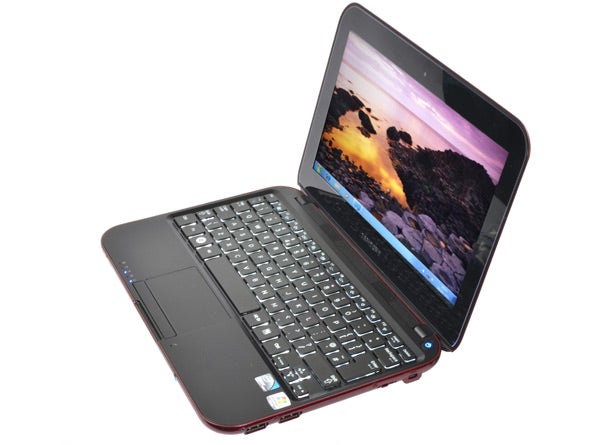 The Samsung NS310 is one of just a few netbooks to offer a keyboard backlight, further boosting its usefulness as a typing tool. This is controlled using the light sensor just above the keyboard. Short of putting your finger over this sensor, you can’t force the backlight to turn on, but F-key shortcuts let you turn its intensity up and down once enabled. If the NS310 has a star feature, this is probably it.

Trackpad performance is good too. There’s no odd-looking surface to it, as you see in so many laptops these days, but the lightly textured surface of the keyboard surround makes for a near-perfect pad material already. The mouse button is of the standard single-strip variety, but there’s only a very small dead zone in the middle between the left and right button pads. Standard multi-touch gestures are supported. 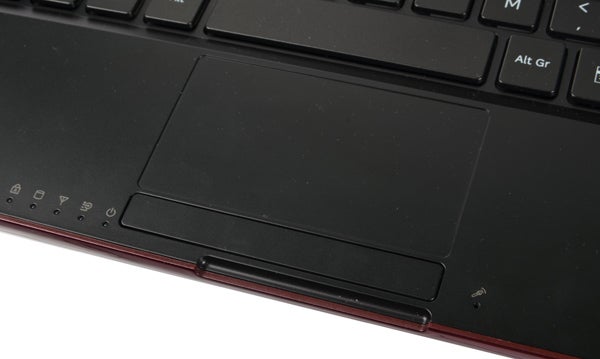 The 1024×600 pixel screen suffers from slight contrast shift when tilted backwards, but Samsung has cleverly limited the amount of tilt the screen hinge is capable of, so that it only just starts to set in once fully reclined. Providing a claimed 300nits of brightness, the LED backlight is powerful – enough to make using the NS310 outside on a sunny day possible regardless of the glossy finish, which is highly reflective. The battery spoils this somewhat, but more on that later.

Within the netbook subset, it’s a decent display, but the 117dpi pixel density afforded by the 1024×600 panel ensures it never looks great. It’s simply too pixel-poor for sumptuousness – but this is a problem with the wider netbook market as a whole, not just this model.

The Samsung NS310’s Atom N550 processor provides the netbook with 1.5GHz of dual-core power. But, as our productivity benchmark shows, it doesn’t go all that far. Scoring just 1511 in our PCMark Vantage test, which assesses the power of computers in a host of real-world style situations, the capabilities of this computer are distinctly limited. 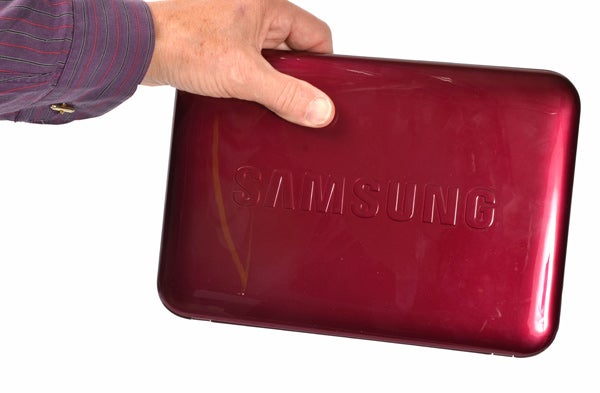 It’ll handle basic productivity tasks, but just doesn’t have the grunt for intensive image processing, video editing or gaming. The graphics chip inside is an Intel GMA3150, which isn’t worth posting on Twitter, let alone writing home about. In the relatively non-taxing Trackmania Nations benchmark gaming test, the NS310 achieved a paltry 8fps. This will play Farmville, but that’s about it. It doesn’t have enough power to trot out World of Warcraft at a decent speed, for example.

It does, however, have enough power to play 1080p MKV files without a hitch. The Samsung NS310 breezed through our high bit-rate test, playing back Blu-ray quality content without dropped frames – although it failed to render the top 42mbps clip. It also handles YouTube HD 1080p content without a problem. To get better performance in a netbook form factor, you’ll need to check out AMD’s new Fusion chip or an older AMD C-50-powered unit – but these are available for £279.99 or less.

Battery life when playing video is poor, though. Plenty of netbooks these days give eight hours use or more off a charge, but this one lasted just 2 hours 59 minutes when playing an SD DivX file at 50 per cent brightness. If you want a netbook you can use all day away from the power socket, this isn’t it. This seems an unfortunate stumbling point when several cheaper Samsung netbooks, such as the NC10 and NF110, offer great stamina.

The Samsung NS310 isn’t without its positive points, but the negatives outweigh them. It’s light and portable, but limited battery life makes it less practical than an 8-hour model. The keyboard is good, but it’s inherently limited by its size, while the price means you can buy a slightly larger ultraportable laptop for not much more money – if you shop around a bit. Within the netbook space, the Toshiba NB550D is a much better bet if you haven’t already fallen in love with that glossy red case. It offers more power and a full HDMI output, and doesn’t cost a penny more.

Samsung’s NS310 gets some things right. The keyboard is good and its backlight remains a rare feature in the netbook world. However, it fails in one too many core respects. Battery life is poor, the Atom-powered processor doesn’t excel above much cheaper models and the price is just too high for us to stomach.