Few household chores are quite so loathsome as vacuuming. Cooking can be out and out enjoyable, mowing the lawn gets you out in the sunshine, cleaning the bathroom is a quick and small job. However, vacuum cleaning is hot, dusty, laborious work that needs to be done with far too much frequency for it to ever be a novelty. In other words, if there were a robot that could do it for us, we’d lap it up. Oh frabjous day! What do we have here?

The Samsung navibot SR8855 is a low-lying circular device that scurries around your house, automatically navigating its way round, cleaning your floor as it goes. It incorporates a conventional cylindrical brush as well as brushes for prizing dirt out of corners and uses a combination of sensors and cameras to work out where it’s going. Unlike the iRobot Roomba, which is arguably the most famous of these devices, the navibot actually maps out your rooms and works out the quickest way to work its way round. In this regard it is much like the first of these robot vacuum cleaners, the Electrolux Trilobite, which is no longer on sale.

With dimensions of 360 x 360 x 105mm, the SR8855 is markedly larger than the Roomba meaning it has less chance of fitting under beds and sofas and between chair legs. With that extra bulk you do get some extra features though. As well as two inward-rotating brushes to help it tease dirt from edges and corners and into its clutches (the Roomba only has one), the navibot has a proper conventional rotor on its underside. This is in contrast to the Roomba that uses two contra-rotating cylindrical brushes that are prone to snagging on cables or carpet tassles. In theory the navibot doesn’t completely avoid this issue, but we certainly had no problems. 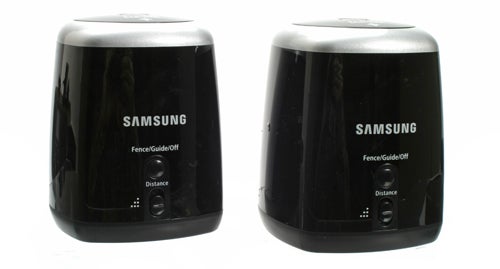 With the SR8855 you get two Smart Gates, a docking station, and a remote. The Smart Gates use an electromagnetic beam to block the navibot from crossing an otherwise open path – say the transition from one area to the next in an open plan living room. You can set it to either permanently block the path or to let the ‘bot through only when it has finished the area it’s working on.

As for the docking station, it’s used to charge the navibot – a task that takes an hour or so. What makes the SR8855 particularly clever is it will return to the docking station when it’s low on juice, charge up, and then return to where it left off. So if you live in a really large open plan house, you can leave it running while you’re out safe in the knowledge that even if it takes all day, the whole house will be clean when you get home. 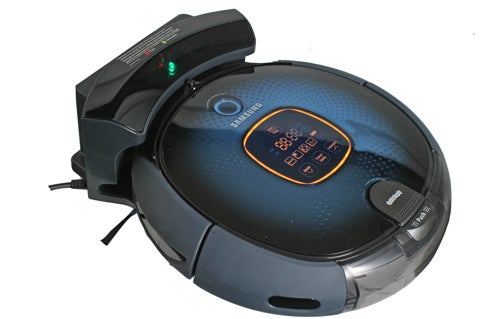 It’s this idea of having the navibot run while you’re out that really is key to its appeal. As such there’s a timer for setting exactly when you’d like the cleaner to do its thing. Sadly it only has one setting, so you can’t turn it off at the weekends (you can of course just turn the whole unit off instead). 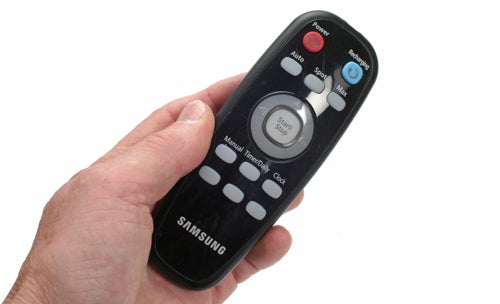 If you’d rather take control yourself, the remote lets you do this by using the D-pad on the remote control to steer it around. Either using the remote or by pressing the buttons on top of the unit you can also set it to Max or Spot modes as well as the normal Auto mode. Max mode has the cleaner cover the same area twice while spot has it cover the square metre or so around where you place it on the ground – useful for little spills.


The unit we’re looking at is the SR8855, which has touch buttons. An SR8845 is also available, but it has physical buttons and only includes one Smart Gate. It is otherwise identical, though. 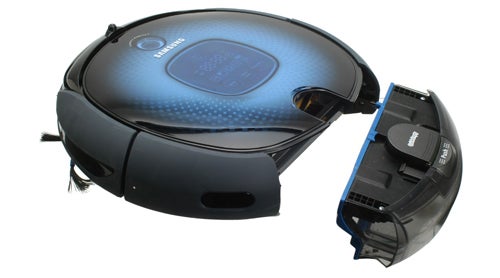 The navibot itself is very well built with a thick rubberised strip round its edge protecting it, and whatever it bumps into, from harm. The shiny plastic used on the top isn’t the most sensible choice due to its ability to highlight scratches and dust, but it’s a minor point. Underneath, the two drive wheels are mounted on springs that give the wheels a good couple of inches of travel and allow the navibot to traverse quite sizeable changes in floor height. They also cope well with relatively rugged carpet, though long-weave shagpile-style carpets will foul it up. It can also have problems if it approaches a change in surface at an angle as the small balance wheel can catch on the edge and deflect the navibot.


Overall, though, the SR8855 is surprisingly accomplished at getting round a variety of rooms. With a press of the go button, it will start off straight away, zigzagging up and down until it meets an obstacle, at which point it will keep shimmying across until it can carry on. In my variously wooden, tiled and carpeted two-bedroom flat it cleaned the open plan kitchen and living room, my bedroom and en-suite, and the hallway within about an hour, which isn’t half bad. In that time it didn’t have to return to recharge once – it should last up to 90 minutes.

Its vacuuming performance was also perfectly adequate for light soiling and the bagless dirt collector has ample volume for covering a large area – it’s also really easy to remove and empty. If you do have pets or someone with long hair, it may struggle to pull all the hair out the carpet, though. Also, the overall suction power isn’t great and relies overly on the brush to dislodge dirt. For instance when passing over the transition from a wooden floor to a tiled one, the raised door strip caused the navibot to miss the inch or so of dirt either side of it. More problematic, though, is how poorly the SR8855 copes with obstacles and edges. 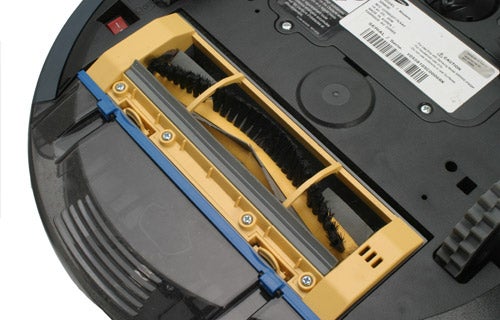 Looking first at obstacles, the SR8855 seemed utterly incapable of actually detecting anything via its sensors. Even walls sometimes required a bump before it would respond to them. Combined with its bulk, this meant chair and table legs proved all too much and the navibot would invariably end up skirting round the whole lot. As for getting to the grime under sofas and coffee tables, you’ve got no chance. 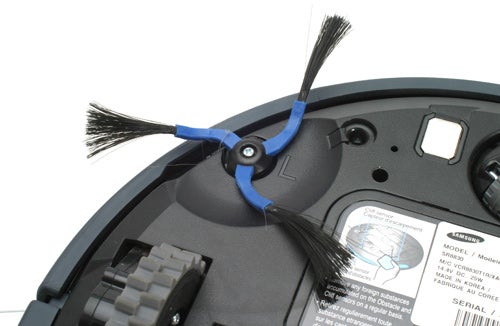 This is bad enough but what really hurts the navibot is it doesn’t do edge cleaning. Instead of detecting and tracking along the edge of a wall, it will just carry on in its own predetermined straight line until it hits a wall. When it does so it merely shimmies along and carries on in the same direction. So if it’s approaching a wall at an angle you get a step effect. Combined with its limited ability to get into nooks and crannies, this leaves you needing to go round with another vacuum cleaner to finish the job. 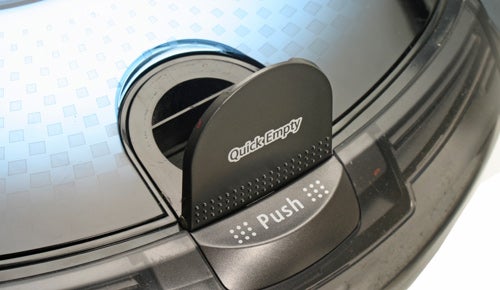 So, if you have a large open-plan flat or house with few stairs (the navibot can detect stairs but it can’t clean them) the SR8855 could be useful for getting the bulk of your cleaning done while you’re out, leaving you to just whip round with a handheld vacuum cleaner when you get in. For any other living situation, though, the SR8855 just doesn’t make sense. What’s more, the latest Roomba is nearly half the price, though we’re yet to test it (we have one in the office ready to be looked at soon) so it could yet prove to be completely useless.

The Samsung navibot SR8855 robot vacuum cleaner employs some clever tech and is a great way to get the bulk of your vacuuming done without lifting a finger. However, you’ll still need a second vacuum cleaner to get in all the nooks and crannies and it is very expensive.