Today we’re looking at yet another netbook from Samsung, which has been on a roll in this area ever since its NC10 won our Best Netbook of 2008 award. The N110 came along and didn’t mess with the basics, merely introducing a few slight design tweaks. Now though we have the Samsung N120 before us, so it’s time to see what goodies are packed into its attractive shell.


Unfortunately, Samsung seems to be pulling a bit of an Asus on us, bringing out various refreshes of its netbooks which vary only in non-obvious ways. Like the N110 before it, Samsung’s latest – available in black or white – is at first glance nothing more than an aesthetic update, so inside you’ll find exactly the same components as in last year’s model. 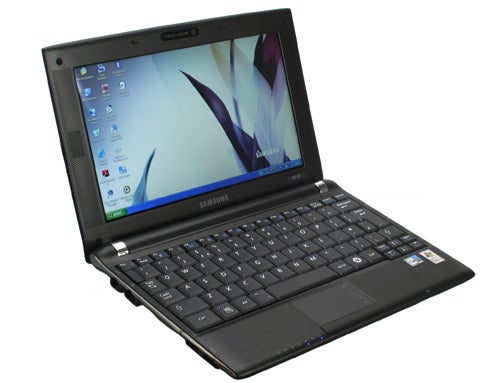 Most people will probably be familiar with the specification this kind of setup gets you: an Intel Atom N270 processor running at 1.6GHz, a single gigabyte of RAM (which is just enough to keep the pre-installed Windows XP happy), and a par-for-the-course 160GB hard drive, with standard 802.11g Wi-Fi and Bluetooth 2.0 plus EDR for wireless communication. Unfortunately, this also means the same underpowered Intel GMA950 integrated graphics, so you won’t be running most HD video formats smoothly on this little netbook. 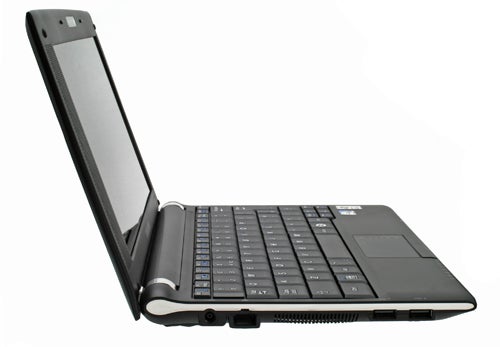 Why then, aside from the new styling which we’ll get to in a minute, should you go for this little beast over its predecessors? There are only two hardware changes which are of genuine interest. The first is that the chassis has been extended, making for a wider netbook at 272mm and adding 20grams to make the total weight 1.28kg. This has not only given Samsung room to implement a ‘full-size’ keyboard with similarly-sized keys to those on a 12in notebook, but has also allowed the company to move the speakers to either side of the 10.1in screen and even add a subwoofer, making the N120 the first 2.1-speaker netbook we know of.


Visually, the changes are mostly subtle but all welcome. Gone is the piano-black fingerprint-loving lid of the N110, to be replaced by a semi-matte finish that requires far less maintenance and won’t show up scratches as easily. We must applaud Samsung for breaking with the common tradition of making portable machines shiny; one it has previously promoted assiduously. It’s also worth mentioning the included black nylon slipcase, which frankly feels cheap but does the job, protecting the N120 from wear and tear. 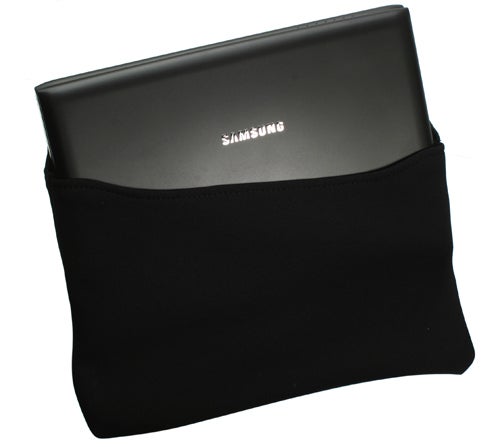 On the inside, this netbook looks nearly identical to the N110 aside from the screen’s wider bezel, which here incorporates the speakers and a larger webcam section. Another small but welcome change is that all the ports are now marked by clear icons along the top (much like they were on the NC10). However, the chromed hinges are now matched by thin chrome strips to either side rather than the N110’s red trim, which lends it a more cohesive look.

Build quality isn’t quite as impressive as previous models, with a bit of give on the chassis and a little creak on the hinge. It doesn’t feel flimsy though, and the light construction helps to keep this larger machine’s weight down to 1.28kg compared to 1.33kg for the smaller NC10.


As for connectivity, nothing has changed since the NC10, so we’ve still got power and Ethernet jacks on the left, along with two USB ports. At the front resides the 3-in-1 card reader supporting SD, SDHC and MMC, and finally on the right are headphone and microphone sockets, a third USB port and VGA-out, in addition to a lock slot.

Getting onto usability, the full-size anti-bacterial keyboard is a pleasure to use, offering crisp if slightly shallow feedback and a nice feel. Personally I still prefer the excellent example found on the HP Compaq Mini 700, mainly because – contrary to every desktop keyboard – Samsung has placed the ” key to the right rather than the left. Since I am a right-shifter, this led me to repeatedly hit ” when I meant to capitalise a letter, though obviously it’s not an issue for many and something you get used to over time. Still, it’s not an issue on the US version, where the ” key is placed above the smaller Enter key. 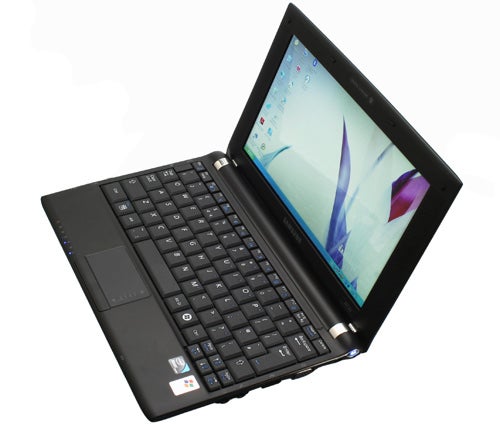 Our only complaint with the otherwise decent touchpad is that the rocker switch doesn’t feel quite as solid as on previous Samsung netbooks. Aside from this it’s sensitive with a pleasant surface and large scroll zone. As on the N110, a series of indicators denoting drive, wireless and battery status to the left of the pad are easily visible with the machine closed.


Unfortunately Samsung didn’t apply the same anti-gloss philosophy to the N120’s screen as its lid, so with a dark background and any ambient lighting the 10.1in 1,024 x 600 display gets very reflective. On the positive side there’s little banding and almost no backlight bleed, while colours are bright and text is sharp. As usual for a TN display though, strong contrast shift affects its greyscale performance. 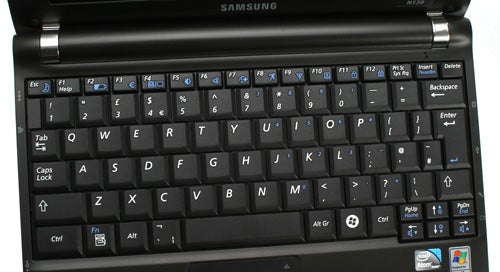 As one would hope, the 1.5W speakers and subwoofer are very impressive – at least by netbook standards. Getting decent bass out of something the size and price of a netbook is not likely to happen anytime soon, but nevertheless audio reaches relatively high volume levels without serious distortion, while SRS TruSurround XT and SRS WOW XT processing help give a bit of depth. In terms of audio production this is the best netbook we’ve reviewed, but that’s not saying too much and you’re still better off using a good pair of headphones.

In terms of software, as mentioned the OS is Windows XP SP3. Though there’s no Office suite, OpenOffice is free to download. McAfee is on hand for Anti-Virus, but the most useful addition is Samsung Battery Manager, which lets you fully customise various settings such as CPU speed (Maximum, Auto or Minimum), LCD brightness presets and LCD auto-dimming using an intuitive and visually attractive interface. Best of all, it lets you see just how changes to these settings should affect battery life.

Last but not least is the 5900mAh (66Wh) six-cell battery, the same capacity as found on the UK SKU of the N110. Samsung claims “up to 10.5hrs” on this, but that’s a little optimistic. Still, with the screen at a perfectly usable 40 per cent brightness and Wi-Fi turned on, the N120 managed just over six hours while playing back video. This could easily be extended during less intensive usage, with wireless turned off and the screen set to minimum brightness, on which it is still legible.


This battery life is roughly in line with the N110, which while not up to the heady heights of the Asus Eee PC 1000HE is still better compared to most netbooks.

Though generally around the £380 mark, it’s possible to find the N120 for under £360. This not only puts it in the same price-class Samsung’s N110, but also its NC20, which houses an HD-capable 12.1in 1,280 x 800 screen in its slightly larger chassis. However, since we haven’t reviewed the NC20 yet it’s difficult to know how it performs. Back to the N110 then, which one you go for depends mainly on your aesthetic preferences. In its favour, the N120 offers a matte-finished lid, better speakers and a slightly larger keyboard, but also adds wider dimensions.


From a value perspective, the one to get is actually the original NC10, which despite a few minor disadvantages (including slightly shorter battery life) offers identical specifications and a similar overall experience for £60 less. If battery life is your main consideration on the other hand, the Asus 1000HE is also available for around £300. 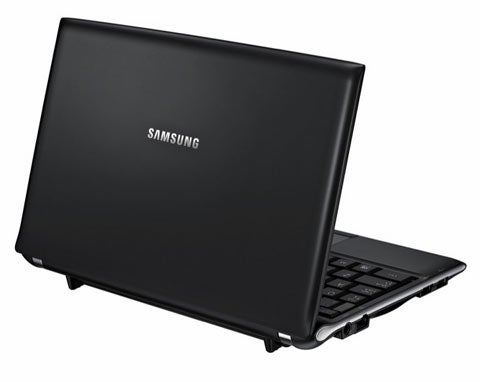 
Thanks to a wider chassis, Samsung’s latest N120 netbook gives you 2.1 speakers and a slightly bigger keyboard than the company’s N110, but is otherwise identical in terms of specification to both that and the original NC10. Considering it demands a considerable premium over the latter, while the NC10 is still available most people will be better served getting that for £60 less.