Up-sell: it’s a phrase that’s heard quite often in the TrustedReviews office, though it’s never uttered by any of the wordsmiths that write these articles. However, our Publishing Manager -an affable Australian with a special love for Excel spreadsheets – can often be heard using the term, often prefaced with other jargon such as ‘top line’, ‘up-weight’ and ‘run rate’ – he speaks the English language, just not as we know it.


It’s the phrase ‘up-sell’ that’s relevant here, though, because PC manufacturers are desperately trying to do just that with their netbooks – just look at the Asus Eee PC 1008HA we reviewed yesterday for evidence of that. And, with Computex quickly approaching and promising a slew of nVidia Ion based netbooks, it’s a trend that’s likely to continue, but in the meantime we’re looking at the more humble Samsung N110. It’s the long-term successor to the outstanding Samsung NC10, which won our coveted Editor’s Choice Award as well as Best Netbook in our 2008 annual awards. Suffice to say, then, that the N110 has a lot to live up to. 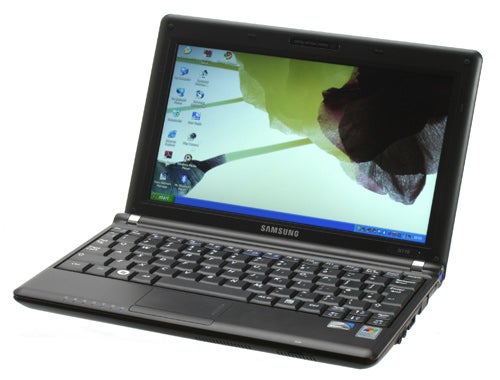 In all honesty, though, there’s no need to get too excited, since the N110 is really a relatively light refresh of the NC10. Indeed, in terms of hardware, it’s the exact same machine. There’s an Intel Atom N270, 1.6GHz processor, 1GB RAM and a 160GB hard drive for the basic components, while Wireless-G Wi-Fi, 10/100 Ethernet and Bluetooth round things out. Windows XP is a given and it is worth noting that the N110 continues with the Intel 945GSE chipset, so doesn’t feature any video processing extras. 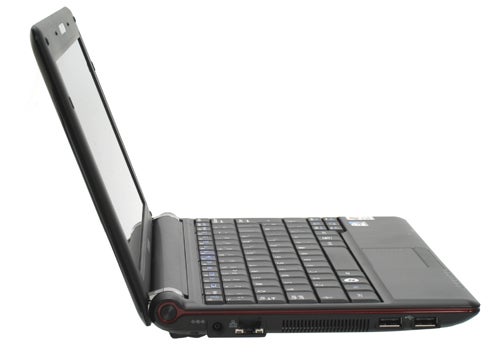 So, what does it feature? Well, though the basic chassis is largely the same, Samsung has opted for a few well considered design changes. Gone, for example, is the faux-chrome trim, replaced with a thin strip of deep red that’s somewhat reminiscent of the company’s Touch of Colour designs. It’s a nice addition, too. It makes the N110 look slightly classier than the NC10, which didn’t lack for class, while the edges have a greater curve and sculpted feel to them than the NC10.


This hint of red is mirrored in the lid, where the glossy black finish is infused with a red glittery hue when light strikes it at the right angle. Samsung has also seen fit to improve one of the few negative points of the NC10, the touchpad, making it ever so slightly larger. Like everything else it’s a very small change, but it’s definitely a positive one. 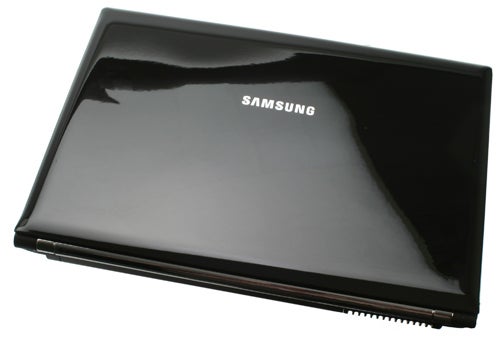 Perhaps less positive is the new glossy finish to the screen. This is bound to polarise opinion, some people cannot stand them and some are more ambivalent (while some of us actualy like them – ed.), but given the choice we’d sooner have seen the anti-glare finish of the NC10 retained. Despite this change, though, it should be stressed that the screen is a very good one. It’s bright, has decent viewing angles and produces sharp and readable text.

Connectivity, as you might imagine, is also identical both in composition and arrangement. On the left there’s an Ethernet port and two USB ports, while on the right you’ll find headphone and microphone jacks, another USB port, the VGA out and a lock slot. There’s also the power button, which like before is mounted on the side of the hinge section. On the front, there’s the memory card reader, while above the screen is the webcam.

One other thing Samsung has chosen to upgrade is the battery. It didn’t especially need it, the six-cell 5,600mAh unit of the NC10 was perfectly good, but we won’t complain with the new 5,900mAh capacity battery. In our tests we managed seven hours of general usage and eight hours of video playback, so battery life shouldn’t be a problem.

Neither, for that matter, will the keyboard, which hasn’t changed from the NC10 – as before it has a more or less perfect layout, while keys are large and easy to type on. Key action isn’t particularly deep, but is firm and positive and overall the N110 still has one of the best keyboards found in any netbook.


Indeed, just like the NC10, the N110 is one of the best netbooks you’re likely to find. It has all the right ingredients: a good keyboard, excellent battery life and attractive styling. Build quality is also very good, with good quality plastics used throughout, while we didn’t detect any issues with heat or noise. Were we to have one single criticism it would have been nice to see the Wi-Fi upgraded to Draft-N, which would have provided a more tangible improvement over the NC10, but it’s not a fatal issue.

One sticking point, though, could be price, since we’ve been quoted an MSRP of £349. Clearly this is a tad on the dear side, though once the N110 hits retail this is likely to go down and it’s easy to forget the weak pound continues to confound our concepts of value – things just aren’t as cheap as they used to be. Added to this the relatively meagre improvements over the NC10 and the N110 won’t have current owners queuing around the block. 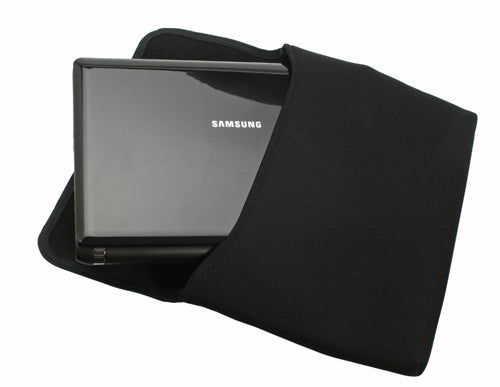 
Despite not adding a great deal over the NC10, the N110 is still an outstanding netbook provided you don’t care about mooted extras such as video decoding. Thus, once the NC10 is inevitably discontinued, the N110 is one netbook that should be on most people’s lists.