The Samsung MW7000J is a combination microwave, oven and grill with a large capacity. And a large rear end – it sticks out a lot, which means you lose worktop space in front of the appliance.

The features and controls are great but we found it to be noisy and slow on some cooking modes. There are other models that do a better job of combi cooking. 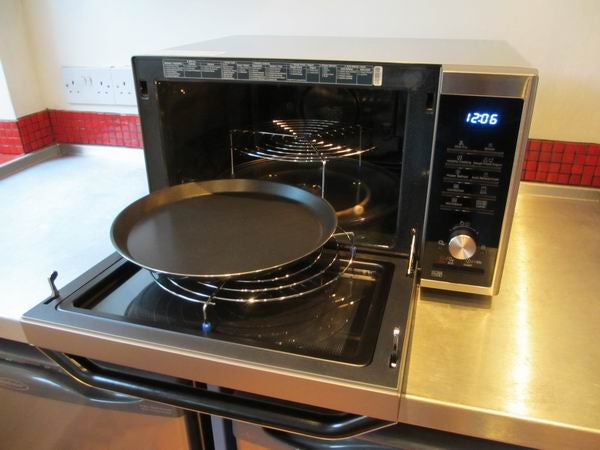 The first thing you notice about the Samsung is that it’s deep. It has a large protrusion at the rear that means it looks like it’s sitting proud of the wall. It’s deeper than rivals such as the Panasonic NN-CF853W and Panasonic NN-CS894S. This is annoying and means there’s precious little useable worktop space in front of it.

It comes with a “crusty plate” metal frying tray and two heights of rack – these are circular and sit on top of the glass turntable rather than being full-width and sliding into the oven. But the Samsung does have an oven-style door that opens downwards. This is nice and ambidextrous, and safer than a hot oven door potentially swinging back on you. 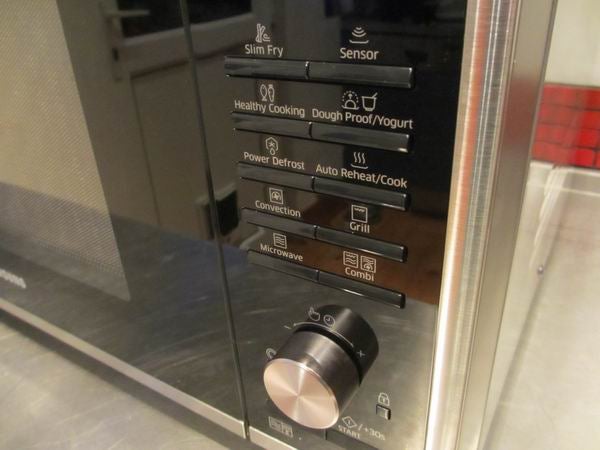 The appliance has a stainless steel finish all round and a black glass door and control panel, with proper buttons rather than touch-sensitive ones. Each button has an icon above it complete with text, so there’s no danger of getting confused about which button to press. That aside though, the exterior design is fairly minimal – there’s more info tucked inside the door.

Open the door and, above the oven cavity, you’ll find a large list of all the Samsung’s different programs, including sensor cooking, healthy cooking, dough proving… even yoghurt-making.

Healthy cooking programs include healthier alternative ways to cook oven chips, home-made french fries, chicken and more with little or no oil, using the crusty plate to help brown them. 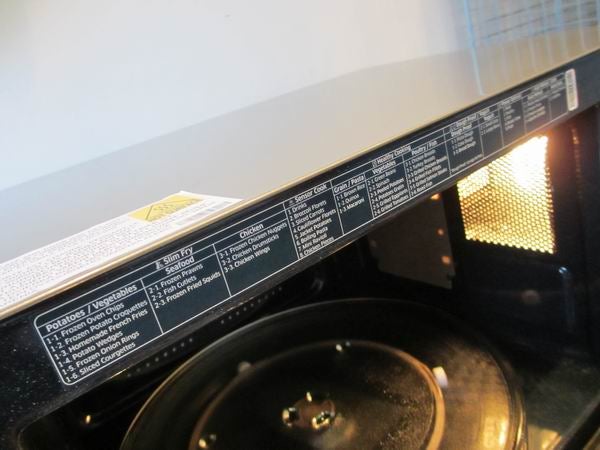 The Samsung’s controls are very pleasant. The buttons are real, responsive ones rather than touch-sensitive. They also don’t seem to be vulnerable to fingerprint marks. There are literally dozens of different programs and, while these aren’t spelled out on screen they are at least detailed inside the door, so it’s easy to pick the right program as long as you do so before closing the door. You press the relevant button and then turn the wheel to select the relevant cooking time or program.

The 900W microwave has six power levels and a “power defrost” program, including one for bread which we used to defrost a pitta bread. It beeped part-way through, the turntable reversed its direction, and it was done in just over a minute. 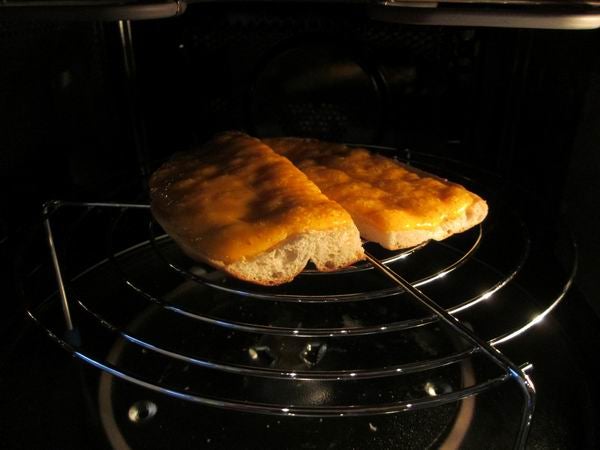 The grill was tested with cheese on toast using the high rack. It took a bit longer than a conventional grill: 3 minutes to pre-heat, 2 minutes for the underside of the toast and 3 minutes to grill the top. But it did a good and even job. And the timer was helpful – no danger of burning the toast if you preset the cooking time. On the downside, you can’t slide a tray in and out like a conventional grill so it’s a bit trickier to juggle your food safely.

Finally we tested microwave oven combi cooking with a large (780g) potato. The Samsung’s Sensor Cook programs, which use a moisture sensor to judge cooking time, include jacket potatoes ranging in weight from 200 to 800g, so we chose the 800g program. Here we found the machine to be noisy, much louder than you’d expect. 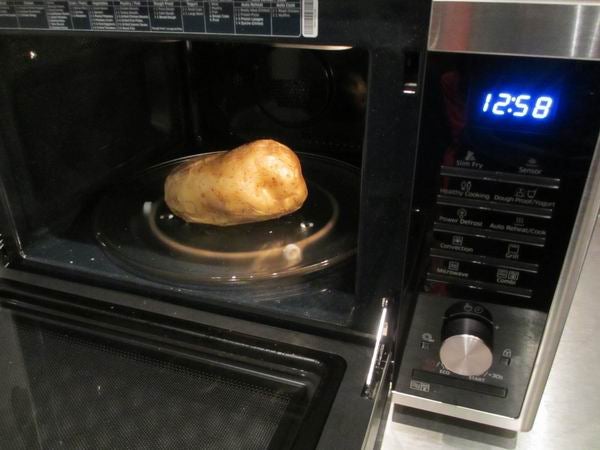 It spent 6 minutes (noisily) cooking without indicating the time remaining, then suddenly perked up and told us it would only be 2.5 more minutes. Predictably for such a large potato, 8.5 minutes was nowhere near enough and cooking was uneven (well done on the underside, nearly raw at the top) so we rolled it over and started again.

It still wasn’t cooked to the middle, so we zapped it for a further 4 minutes at full power – a total cooking time of 21 minutes. That’s OK by combi oven standards but the resulting jacket spud tasted less oven-cooked and more microwaved, so it was disappointing. 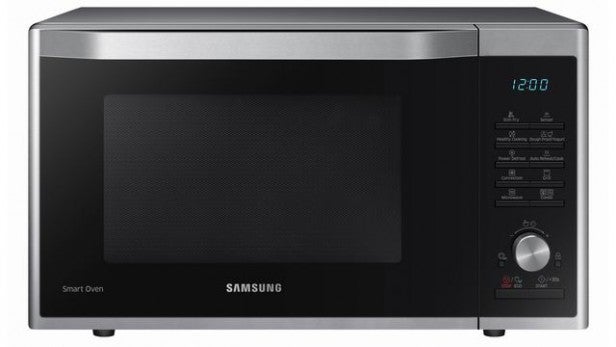 Maybe. The Samsung’s controls are very good but the cooking disappointed in terms of its noise, its speed and its results. It also takes up a lot of worktop space. If you want a great microwave look at the Sage the Quick Touch. And if you want a combi oven then it’s worth spending more and getting the Panasonic NN-CF853W or Panasonic NN-CS894S instead.

This Samsung combi microwave oven has a great range of programs including dough proving and yogurt making but it can be loud and slow.