The Samsung KS7000 won the TrustedReviews award for TV of the Year in 2016.

That wasn’t because it was the best-performing TV of 2016. There were objectively more capable alternatives. Instead it took the prize because it managed to bring a hugely impressive 4K and HDR viewing experience down to a reasonable price, at a time when most manufacturers were reserving the tech for flagship units.

This year, the Samsung has made a point of dividing its premium TVs from its midrange. The lovely quantum dot technology that propped up older SUHD models is now reserved for the top-tier QLED range, along with ramped up luminance and a proportionately higher price tag.

If that’s a bit rich for you, then consider the MU range. The MU8000 sits at the top of that with the Samsung MU9000. While it’s clear that Samsung has reserved its best for the QLED range, the MU8000 packs a few pleasant surprises. If you’re after a good 4K and HDR performance and you’re not hell-bent on taking out a mortgage for a QLED model, the MU8000 might be for you. 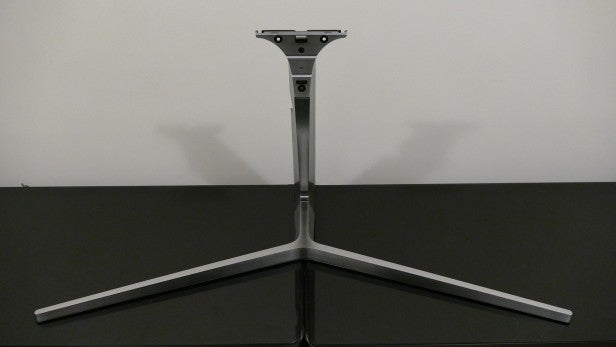 It’s flat. That might seem like an odd place to start, but Samsung is the only manufacturer still strongly pushing curved TVs. For those who aren’t fans of the MU9000’s curve, the MU8000 is the perfect alternative since they share essentially the same specs elsewhere.

The design takes its cues from last year’s top KS models – slim bezels (the top and sides, anyway) and a Y-shaped stand. The thin frame surrounding the TV is metal, but everywhere else is plastic. To be blunt, it feels a little cheap up close – I noticed a few rough edges when I was setting it up, and the single-neck approach means it will wobble a bit if you nudge it.

Still, it looks nice from the sofa. And on a practical note I’m glad to see a TV with a centre stand, as opposed to having feet right at the corners – you don’t then need a bench as wide as the TV.

Get £30 off all TVs 55 inches or above with code TRUSTED30TV at ao.com. Order now and get it delivered tomorrow. 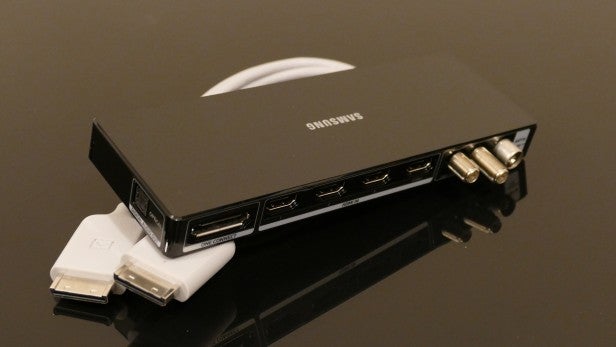 As is now traditional on Samsung’s more fancy TVs, the bulk of the connections are housed separately in a One Connect box. There are four HDMI ports (all 4K and HDR compatible) and two USB ports alongside the aerial connections and a digital optical output. On the TV itself, there is also an ethernet socket and one more USB port.

Sadly, there’s no sign of the super-thin, almost invisible cable that runs from the TV to the One Connect box. It’s a regular chunky cable, although the stand’s back peels away to reveal a neat cable management channel.

There are two remotes: a traditional one with loads of buttons and a ‘smart’ one with a streamlined design and fewer buttons. TV smart remotes are always a bit hit and miss, but Samsung’s effort is one of the better ones and I found myself using it a lot more than the traditional one. This year’s smart remote has been improved with better grip and rubberised buttons. 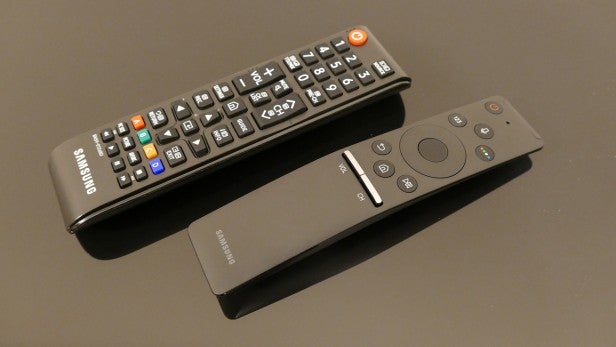 Alas, there’s no Dolby Vision, which is commonly considered better than HDR10 because its dynamic metadata can be used to optimise the picture frame by frame. But Samsung isn’t ruling out dynamic metadata – it’s offering HDR10+, a competitor to Dolby Vision. HDR10+ is an open-source format, that Amazon Video has already signed up to use.

It’s an edge-lit LED unit – Samsung isn’t offering a single direct-lit unit this year. I’d be really worried about this if it weren’t for the fact that last year’s Samsung KS7000 offered some very impressive dimming skills. Samsung is clearly confident. 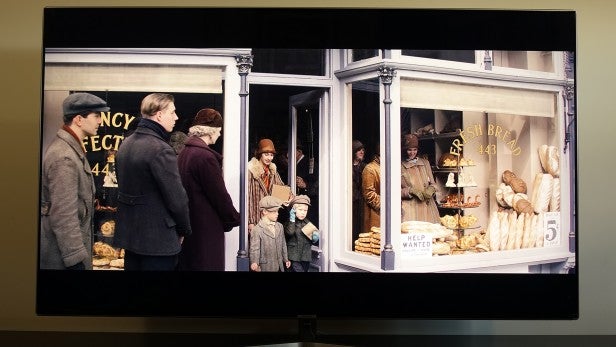 The MU8000 has a claimed brightness of 1000 nits. That’s the level of brightness offered by last year’s top models, but less than Samsung’s QLED range this year, which can hit 1500-2000 nits.

Samsung has been rocking its Quantum Dot technology for a few years now, but this year that’s been reserved for the QLED models, such as the Samsung Q7F. Instead, the MU8000 relies on the ‘Dynamic Crystal Colour’ engine, which claims to deliver more than a billion shades.

On the smart TV front, the MU8000 is equipped with Samsung’s Eden interface. It’s a launcher bar system that pops up on top of whatever you’re watching, without making you pause or kicking you out.

A couple of years ago I would have accused Samsung of shamelessly ripping off LG’s webOS interface, but these days it’s grown to be a different beast. The launcher bar offers two tiers of icons, some of which are customisable. It’s a quick way to jump between your preferred apps and sources, and it’s as easy as channel hopping.

I really like the way the interface automatically recognises what sources you’ve plugged in – the MU8000 correctly identified my game consoles and surround sound amplifier. 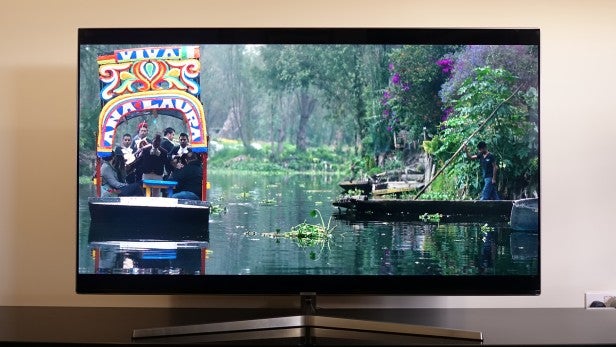 Picture performance is very impressive, as long as you temper your expectations. After all, 4K HDR TVs are still in their relative infancy, and if you step away from the cutting edge models, you will end up with more compromises. The MU8000’s image quality is a mixed bag, but the good does outweigh the bad.

I’ll start with the negatives. As is common with edge-lit LED TVs, there are some lighting issues. I occasionally spotted some clouding. It’s especially noticeable in dark areas at the top and bottom of the screen – if you’re watching a movie with black bars top and bottom, you’re more likely to see it. It’s pretty mild, as far as clouding goes – there’s less here than there was on last year’s KS7000, you’ll only really see it in a dark room and even then it’s certainly possible to get used to it. The flat form factor of the MU8000 might help – our review of the curved Samsung MU9000 had far harsher words in this department.

Viewing angles aren’t amazing. Samsung has gone for a VA panel here, which is good for contrast but poor for angled viewing. If you move out of 25-30 degrees from centre, you’ll begin to lose out on contrast and saturation, and the lighting will look noticeably non-uniform.

As for colours, I’ve seen stronger from Samsung, and this is clearly second-tier performance. What you get here is plenty vibrant, but the Quantum Dot models this year and last year just look richer and more subtle, with a more varied palette. There is also occasionally some striping in HDR. Thankfully it’s rare, though. 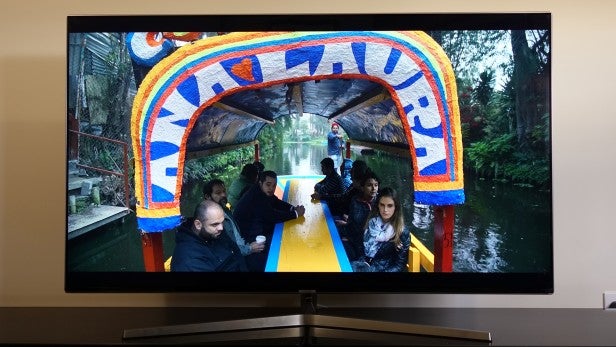 Moving on to the positives. What I really like about the MU8000 is its contrast. It gets plenty bright, and it gets plenty dark. It’s not quite 1000 nits – we’re looking at a maximum of about 700, but that’s enough to give you a tangible visual impact, especially when the blacks are so impressive.

Blacks really look black, rather than slightly hollow and grey, which is what I’ve come to expect from LED LCD TVs. There’s not as much above-black shadow detail as you might find on a good OLED TV, and you get minimal crushing on all but the most extreme of HDR pictures.

Highlights do really well too, with little clipping on bright areas such as headlamps and explosions. Combine the two and you’ve got a level of contrast and dynamism strong enough to give you that HDR hit. 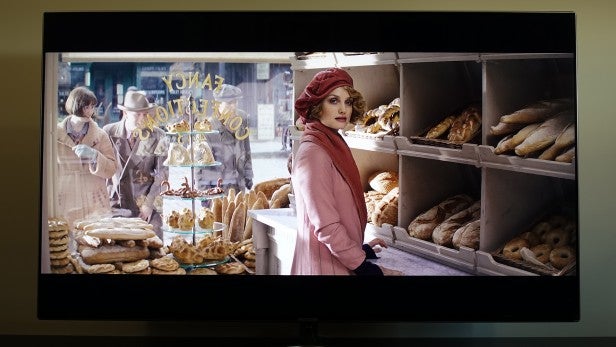 Let’s not forget the 4K element – Samsung’s mastered the resolution. The picture is plenty sharp, with loads of fine texture but without the overly processed look that can come from being a little too enthusiastic. Upscaling from HD and standard-definition sources look clean too, with not nearly as much picture noise as there could be.

Gamers will be pleased to know the Samsung MU8000 does well on the latency front. The 24ms input lag I detected isn’t as impressive as the 21ms figure I recorded on the LG Signature G7 OLED, but it is more than good enough for competitive online gaming.

A final word on audio performance – it’s nothing to write home about. It’s fine for the news, but for any serious viewing I’d recommend a proper sound system, or at least a soundbar. 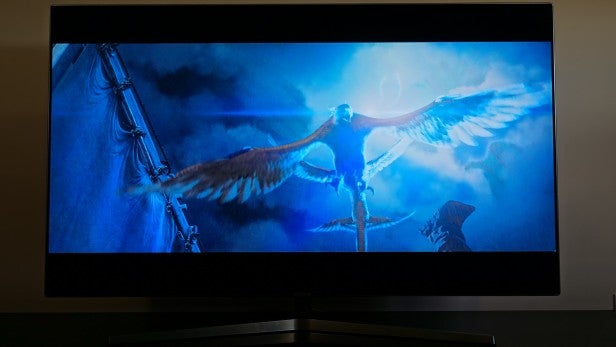 To get the most out of the MU8000, here are some set up tips. I’d recommend using the Standard picture preset – while I usually advocate the Movie mode, I feel this one is too muted and soft. Go with Standard and nudge the colour temperature to Warm.

For bright room HDR viewing, I’d recommend having Contrast Enhancer and Local Dimming on high. For dark room HDR viewing, you’ll want to turn those down to Standard or Low so that you can avoid seeing the blooming – but note that this does knock your brightness down.

Lastly, the motion processing is far too aggressive by default, so go into Custom mode and manually knock the anti-blur and anti-judder settings down – I have it no higher than 3. 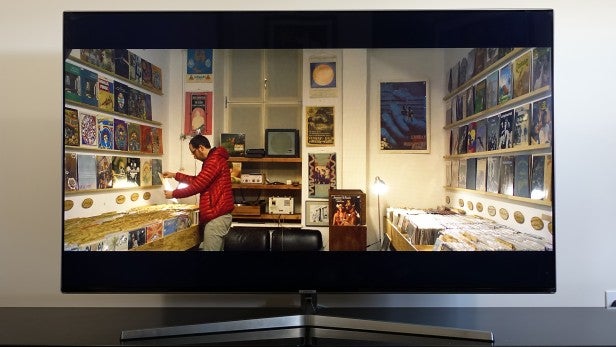 If you’re after that HDR punch, but your budget doesn’t stretch to a premium QLED or OLED model, then there’s plenty to like here. There are a few minor drawbacks, but the MU8000’s strengths easily outweigh the flaws. The contrast here is excellent for a non-premium TV, and if it’s impact you’re after you won’t be disappointed.

Alternatively, if it’s lush HDR colours you want, and you’re not as fussed about brightness and dynamism, it’s also worth checking out the Sony KD-55XE8596.

Get £30 off all TVs 55 inches or above with code TRUSTED30TV at ao.com. Order now and get it delivered tomorrow.

Samsung proves that you don’t need to spend a fortune to appreciate 4K and HDR.