Super-high-end TVs are great, but they come at a steep price. Thankfully, the top tech in such units has begun to filter down into smaller, more affordable models. Right now, mid-range money can buy you what would have been cutting-edge only two years ago.

The Samsung MU6400 series is a great example. It combines a 4K resolution with high dynamic range compatibility and a neat OS that’s packed with the top streaming apps.

It may not be up there with the very best, but you get more than a taste of the good stuff without breaking the bank. If you’re looking for the best TV around the £500 mark, this might be it.

Related: Best TV for any budget 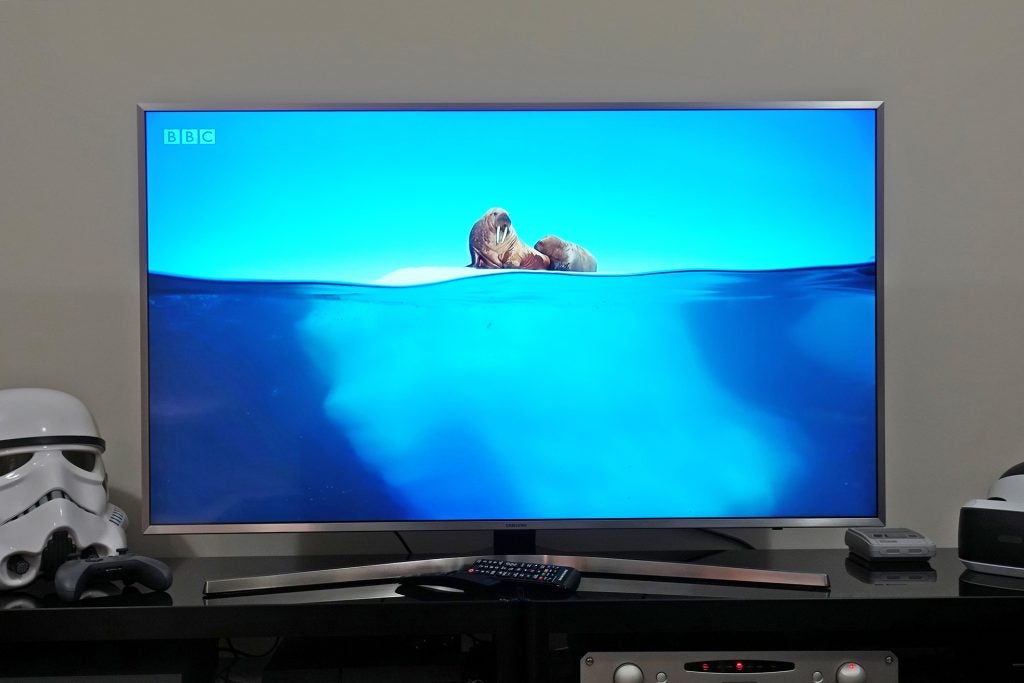 When I said that the top tech was filtering into more affordable models, I wasn’t exaggerating. The MU6400 series looks like the offspring of the KS9500, Samsung’s flagship TV of 2016, which means there are some nice design elements.

The Y-shaped stand is stable and far more practical than having feet at the corners of the screen. You’ll need a table or rack at least 87cm wide, which isn’t unreasonable.

It also sports the same ‘360 design’ of the KS9500. The plastic has a nice brushed-metal texture, and a cable management clip keeps things neat and tidy.

The bezel isn’t super-slim, but it’s made of metal, which adds a premium vibe. The UE49MU6400 is a flat TV – if that doesn’t appeal, check out Samsung’s MU6500 series, which offers identical specs but with a curved screen. 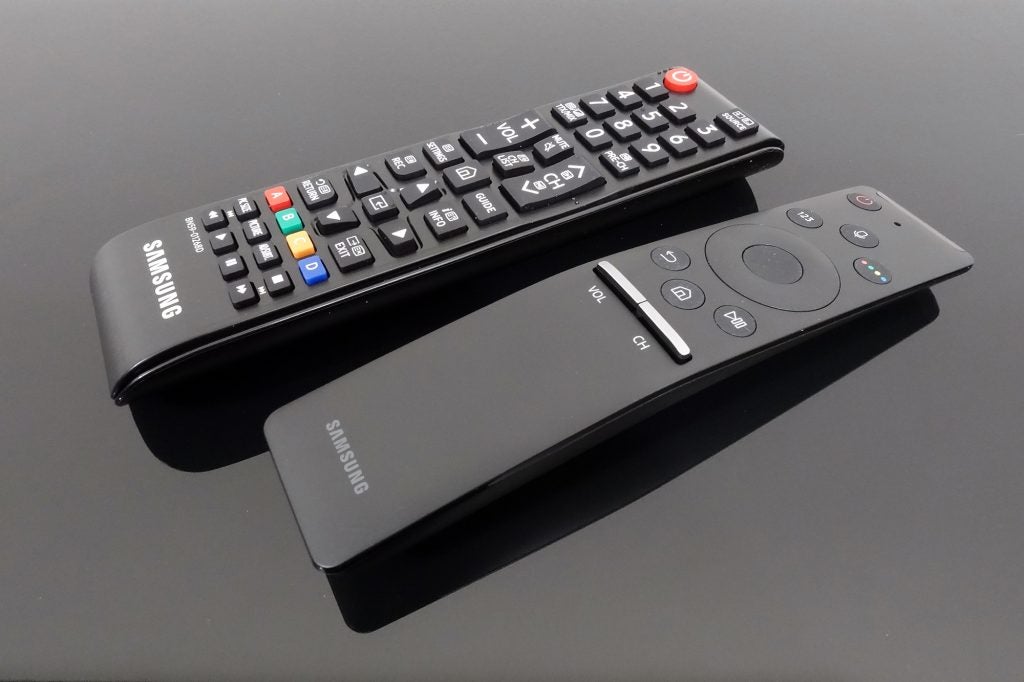 The real sign that Samsung is taking this TV seriously is that it comes with two remotes. ‘Basic’ models come with only one.

There’s the traditional wand, full of buttons, and a smart remote that sports a more streamlined design. The latter is a decent unit – the majority of manufacturers tend to oversimplify their smart remotes, but Samsung retains just the right number of buttons onboard.

Connections can be found on the rear of the TV. This might seem obvious, but Samsung generally tends to keep connections in a separate box. On the Samsung MU6400 series, you plug straight into the TV.

There are three HDMI sockets (all 4K HDR compatible), two USB ports, Ethernet (in addition to Wi-Fi), digital optical out, and a shared composite/component connection for older devices. Time to dust off that classic Nintendo 64.

On the software front, the Samsung MU6400 uses a very neat operating system. Instead of a centralised menu screen, there’s a pop-up launcher – a little bar of settings, inputs and apps. This appears as an overlay without interrupting whatever you’re watching, so you can tweak your settings without stopping your video.

Related: What to watch on Amazon Prime 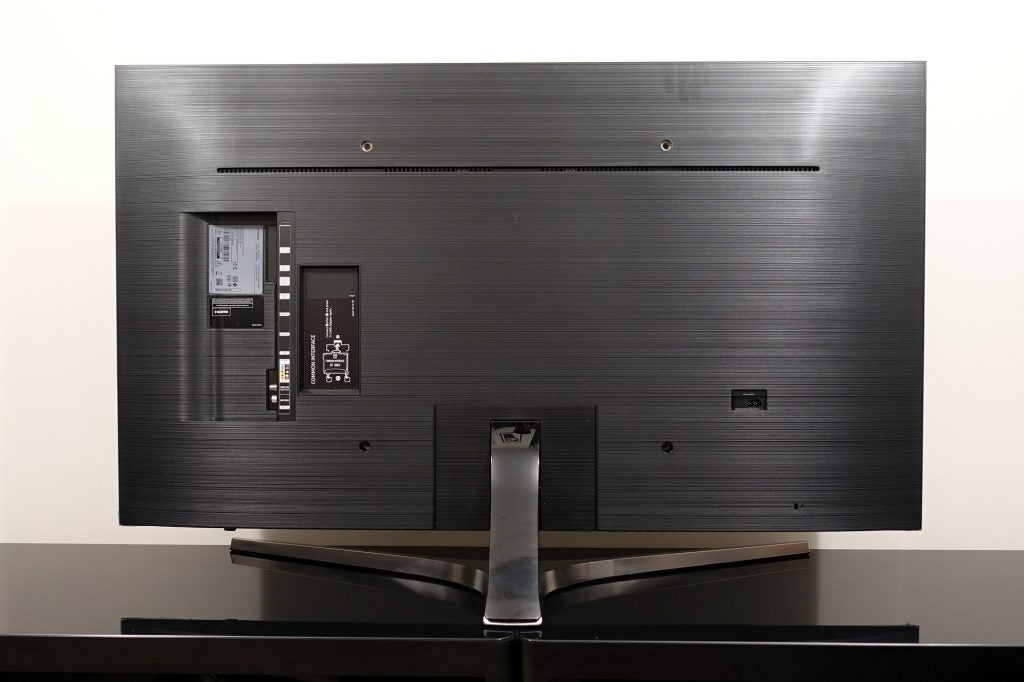 As for the screen itself, this is an LED, LCD, VA panel with bottom-edge lighting. The key difference between the Samsung MU6400 series and the MU7000 above it is that the former uses an 8-bit panel instead of a 10-bit one, and peak brightness goes up to around 370 nits.

This means you don’t get UHD Premium performance. But then you’re not paying UHD Premium prices. Plus, there’s more to it than numbers, anyway – the Samsung MU6400 does a great job for the money. 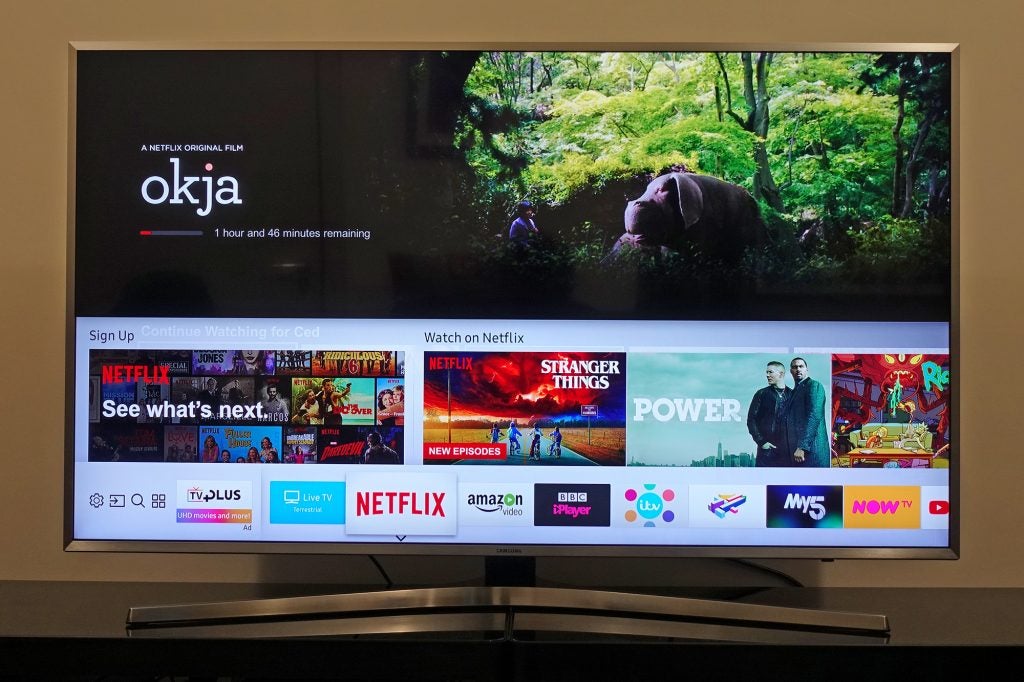 For the most part, the Samsung MU6400 looks great.

The picture is clean and sharp. It makes the most of a 4K feed, either streamed or from a 4K Blu-ray. You get fine textures, but the picture never fails to look realistic. You don’t get that harsh, overly processed look that plagues lesser TVs.

It’s also strong with non-4K content. 1080p feeds do look a little softer than in UHD, but there isn’t a huge difference and details are still finely drawn. Don’t throw out your Blu-rays just yet. There’s a bit of fuzz and picture noise when you play standard-definition pictures, but I’ve yet to come across a TV that’s entirely free of such issues. 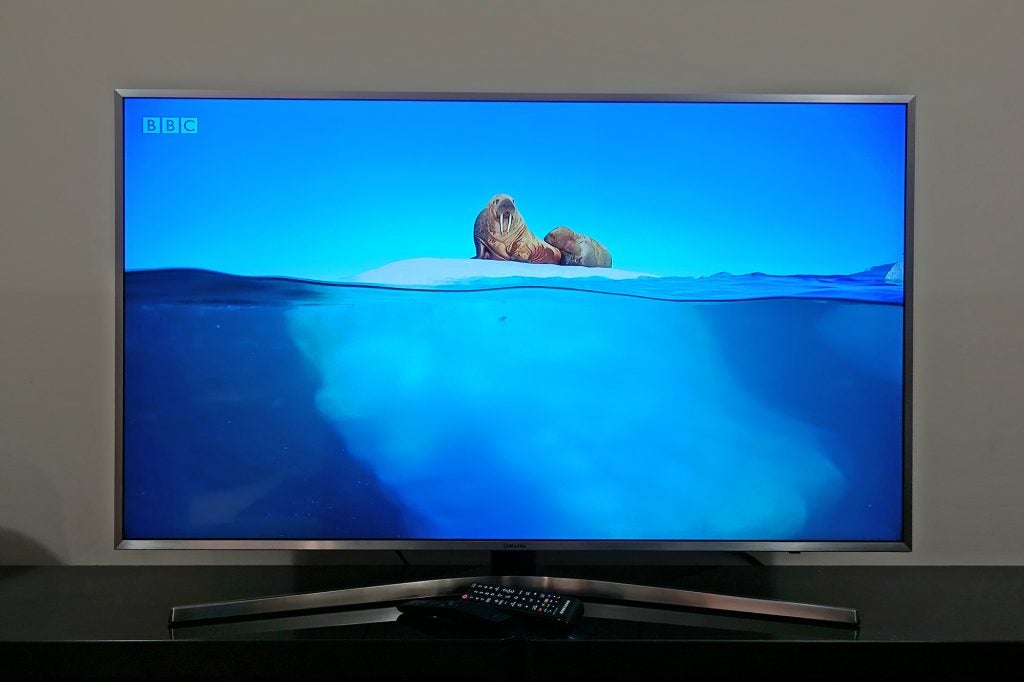 Colour performance is excellent. You don’t get the Quantum Dot tech from the old SUHD series or the new QLED lineup, but the MU6400 series certainly doesn’t lack range. Skin tones are convincing, and elsewhere performance is vibrant – the picture pops, but not so much so that things look artificial. Shading is nuanced, too.

Contrast is more a mixed bag, but this is one of the better affordable LCD performances I’ve seen. Blacks are never truly black, but this set does manage to differentiate between different levels of luminance – even with the demands of HDR.

The UE49MU6400 lacks the contrast range of a premium TV, but the HDR does enough here to make a difference. Colours and highlights look fuller and more intense, and blacks don’t necessarily suffer too much.

This is because this set doesn’t have local dimming – the Samsung UE49MU6400 uses frame dimming, which means the entire picture is lit up or dimmed according to the picture. That does put a lid on how bright specular highlights can go, but it also keeps the shadows from washing out. 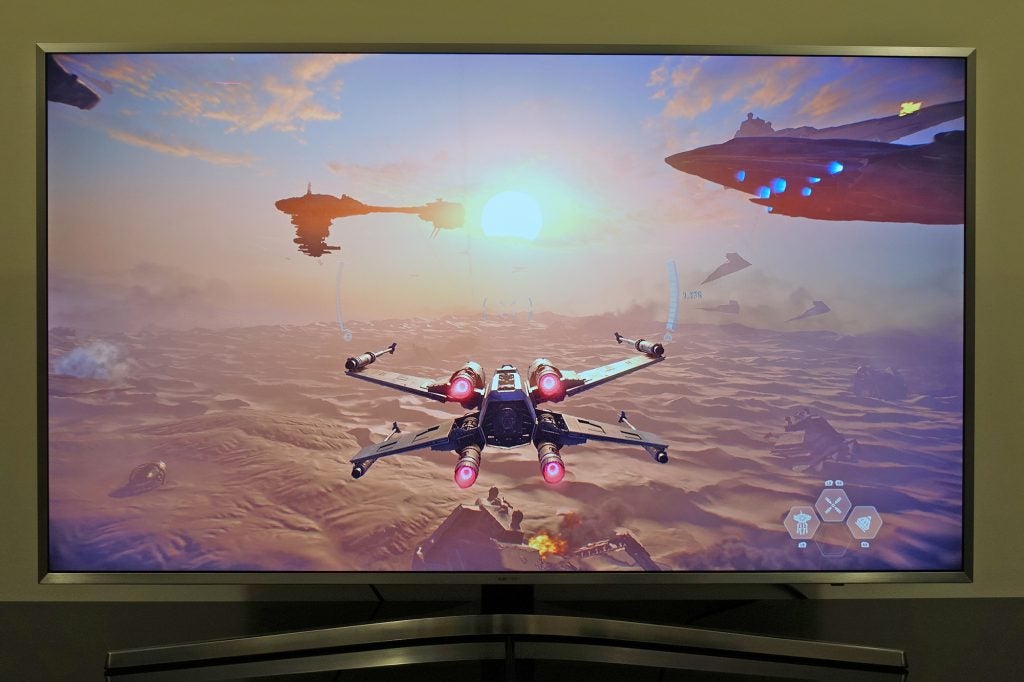 This helps with uniformity, too. This is a bottom-edge lit TV, and as such, you might expect the bottom of the picture to be brighter than the top. But what you get is generally an even picture, without any ugly patches of light. On the review unit, at least, there was no noticeable light bleed.

Viewing angles are typical for a VA panel. The picture looks fine up to about 30 degrees off-centre, at which point the colours begin to wash out.

It’s good news for gamers, too. There’s a dedicated game mode, and I recorded an input lag of about 21ms. That’s plenty responsive, and it means you can’t blame anybody if you get destroyed playing Star Wars Battlefront 2.

Finally, a word on the sound. It’s spacious and balanced enough that you could use this TV for casual viewing – but I wouldn’t use it for movies. If you care about proper cinematic soundtracks, the sound system here just doesn’t have the power. Consider investing in a soundbar, or a proper pair of speakers. 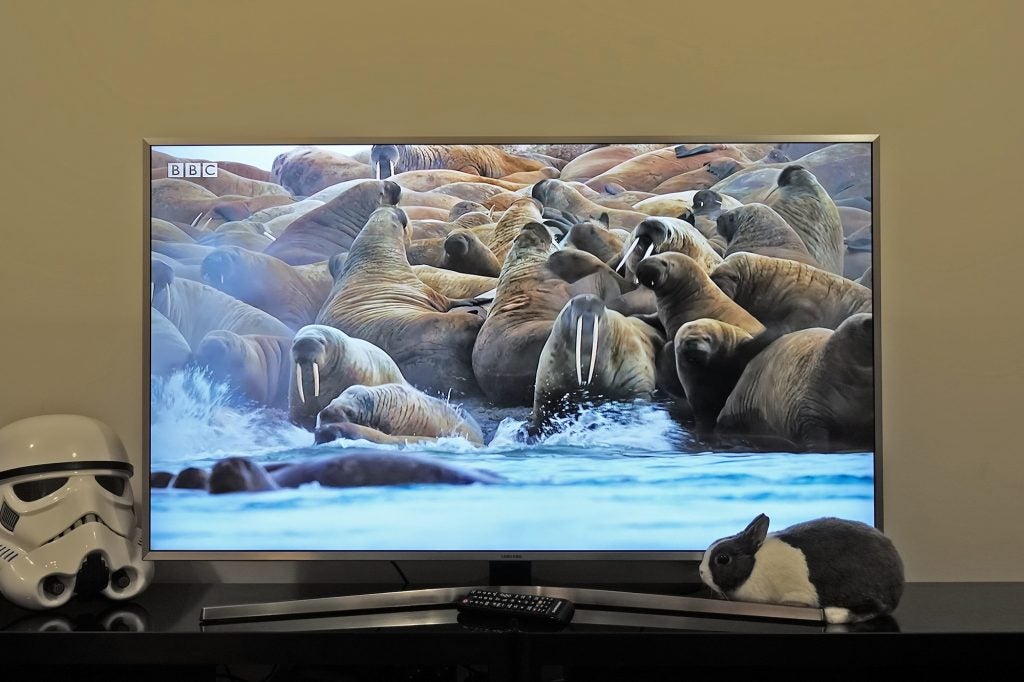 If you have about £500 to spend on a TV, the Samsung MU6400 series is one of the best options available on the market right now. There’s more than enough here to give you a taste of the future. The 4K performance is superb, and while the HDR isn’t up there with the best, it’s good enough to make an appreciable difference in colour and contrast.

This isn’t a TV for the hardcore AV enthusiasts, however; but if you’re upgrading from an old HD 1080p model and you don’t want to spend a fortune, this will see you well.

If your budget can stretch, then it’s worth stepping up to the Samsung MU7000 for a few hundred pounds extra. It offers better contrast and colour, and it won our 2017 award for Best Value TV.

If you’re looking for an Android TV then check out the Sony XE70 series, which performs on a similar level and costs only a little more. While you’re there, it’s worth investigating the Philips 6262, which shoots beams of light across your wall.