If you want a simple but functional laser printer, there are several models under £100, but one of the main players in this market making respectable machines, is Samsung. Its ML-3050 is an entry-level printer, but has several features that you might expect only further up the price-bands.


This Samsung printer is styled in light and dark grey and has the company’s typical no-nonsense design. Almost cubic, though not as tall as it is wide or deep, it has a conventional paper path running from a 250-sheet paper tray at the bottom and ejecting sheets to a depression in its top surface. Above the paper tray is a pull down multi-purpose feeder, which can take a further 100 sheets. This is a good capacity for a comparatively inexpensive printer, where a single-sheet feed is more common. A second, optional, 250-sheet paper tray can be fitted under the printer.


On top, the ML-3050 has no status display and just three control buttons. The first is an orange Stop button and there’s also an illuminated Toner Save button and one devoted to printing Demo pages, which is strangely extravagant. At the back, as well as the ubiquitous USB port, there’s a standard parallel port as well, again unusual in a printer in this price bracket.


The printer is designed for simple installation and running. Pull down the front cover and you have access to a single slot, where the all-in-one photoconductor and toner cartridge slots in. This could hardly be simpler and should keep maintenance costs low. 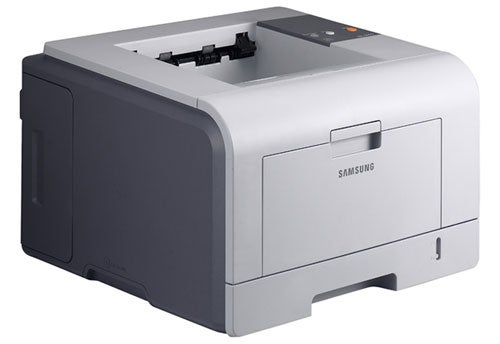 Software includes a printer driver which provides poster, booklet and multiple page per slide printing – with up to 16 pages per sheet – control of manual duplexing and selection of print quality. The ML-3050 has a physical resolution of 600dpi, but this is enhanced through software up to 1,200dpi. It supports watermarks and overlay printing.


There’s also a Web-based utility called Dr Printer, which can perform diagnostics on a sick printer, though we didn’t have recourse to this during testing.


The ML-3050 is quite a nippy little machine, which produced our five-page text document in 23 seconds and mixed text and graphics pages, again five of them, in just 19 seconds. This gives it a true top speed of nearly 16ppm which, while a good way short of the quoted 28ppm, it still very respectable for a printer costing under £100. Even the photographic print only took 14 seconds, a graphics print speed of 4.3ppm.

When we looked at the pages we produced, we were also presently surprised by the print quality. Text is very well reproduced with no spatter and very clear letter formation, even at small point sizes. Business graphics are also well printed and different colours are well represented by greyscale dither patterns.


Interestingly, the normal mode resolution of 600dpi produced a better representation of our photographic test piece than the enhanced 1200dpi print. It was obviously more dotty, but the banding apparent on the 1200dpi print was much reduced and shadow detail was marginally better.


Samsung claims a sound output of 54dBA, but we measured it at peaks of 60dBA, which is quite noisy. As is often the case, these peaks occur when paper is fed from the input tray, rather than during printing itself. 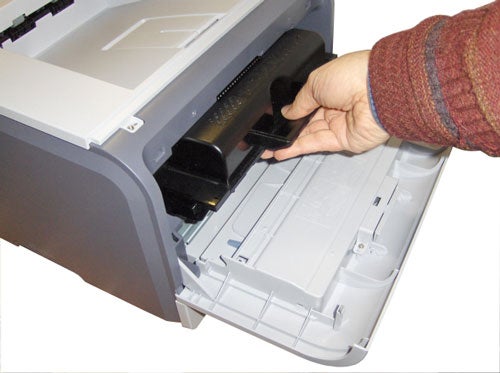 Costs are very easy to determine, as the only consumable is the integrated photoconductor and toner cartridge. This comes in two capacities, suitable for 4,000 and 8,000, five percent pages. As usual, the higher capacity cartridge is better value and we’ve used this in determining page cost. The street price of around £95 gives you a cost per page of 1.66p. This sits it in the middle of typical mono laser page costs.


It is, of course, more expensive to manufacture a complete printer, which includes a consumable cartridge, than a cartridge alone. While the list price of printer and cartridge may show a good differential, street prices can distort these differences, making it attractive to buy a complete new printing mechanism, rather than a replacement, high-yield cartridge.


This printer also offers upgrade options, such as an extra paper tray and memory to upgrade from the supplied 16MB to a maximum of 272MB, which are not often offered on entry-level printers.


The print speed is impressive and print quality is better than from some machines costing considerably more. While Samsung will have to watch the price of its consumables, which now come close to the cost of the printers themselves, the ML-3050 is very good value for quality mono printing.