Samsung has made small-format personal laser printers for a while, but the ML-2165W is probably the most compact yet. With dimensions of a mere 331 x 215 x 178mm, it’s about the same size as a toaster, just a little wider. It does a bit more than a toaster, though, and doesn’t get as hot.

Coloured in shades of mid and light grey, there are no gaps or openings for dust or spills to enter, when the printer is closed. To open it, you pull down the front cover, which then becomes the paper feed tray, and fold forward the top cover, which becomes the output tray. Quite neat, though there’s no cover for the paper stack, so you will probably need to close the machine up when not in use. Cleverly, if you forget to open the output tray before printing, paper feeds through the gap left at the hinge, onto the desk, rather than jamming inside the printer.

To the right of the paper output slot is a small control panel with two leds and two illuminated buttons. The front button turns the printer on and off, but the rear one has a number of uses. 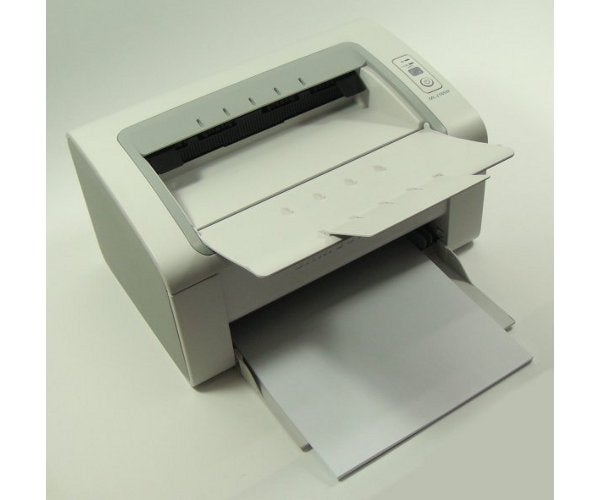 During setup, it acts as a single-press WPS connection and works fine in linking directly to your WPS-equipped wireless router, though this could be complicated if there’s more than one network within range. For wired connection a USB socket is available at the back, too.

After that, it’s used to control manual duplex print, where you take the sheet or sheets off the output tray, put them straight in the feed tray and press to complete the job. It’s not the first time manual duplexing has been handled like this, but it does make it very easy. 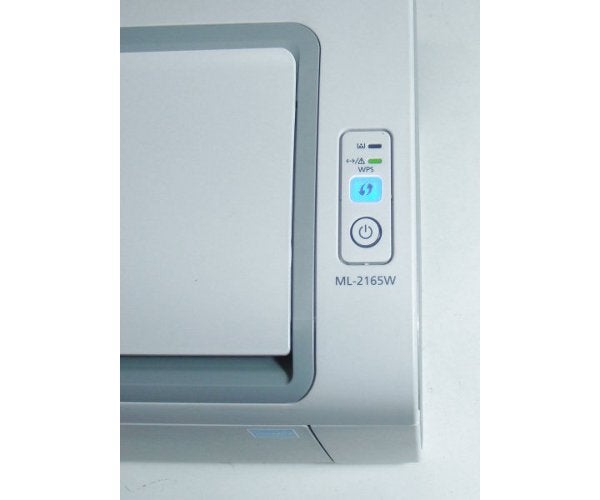 It’s also easy to print from the Web, thanks to Samsung’s AnyWeb Print. This downloadable utility (not that easy to find from the link supplied by the installation CD) automatically scales web pages to fit a printed page, so you don’t lose text or pictures off the edge.

For such a small printer, Samsung’s claim of a top speed that the ML-2165W can do 20ppm may look a bit wishful. It is. However, our 5-page text document still showed a good turn of speed, with the printer managing 9.7ppm, which increased to 14.9ppm on the 20-page document and touched 15ppm for the 5-page text and graphics text. These speeds are very good for a sub-£100 printer and a 15 x 10cm photo took just 13s.

Things weren’t so good when we used Wi-Fi Direct to print from a Samsung Galaxy Mini, Android phone. The small Samsung app, which is available for free from the Android Marketplace, offers a bit more control than a distant print utility, perhaps because it communicates directly with the printer via wireless, rather than through an Internet link. 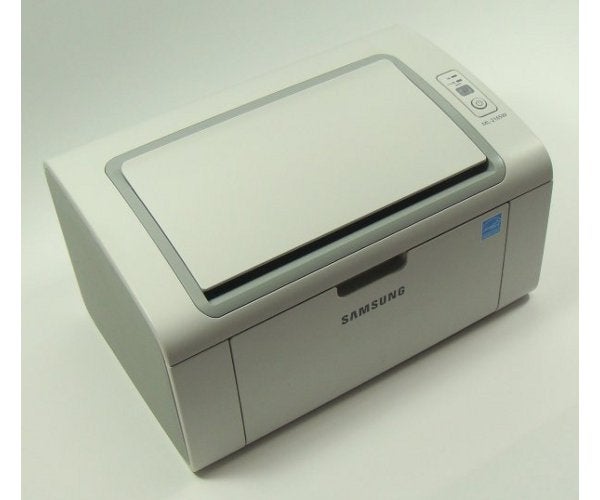 It’s not quick, however, with A4 pages taking between 1:36 and 2:43 to print. It appeared to be the speed of data transfer that was causing the problem, rather than the printer itself, which processed the page at the same speed as in our other tests.

The pages themselves are very cleanly printed, with crisp, sharp text and dense, slightly textured blacks. Greyscales are clean, too, with less banding than we’ve seen on some much more expensive printers and enough variation between greys to distinguish a good range of colours. Even photos look reasonable, though there’s a tendency for darker shades to shift to black and lose detail. 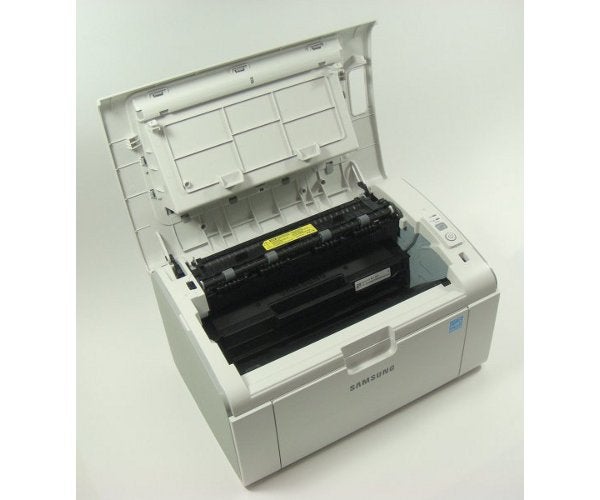 The single drum and toner cartridge is the only consumable in the printer and at around £42 for a 1,500 page version, the running cost comes out at 3.6p for an ISO page, including 0.7p for paper. This is on a par with most mono lasers up to £200, except forKyocera Mita machines. But all told you’re not paying extra in the long run to compensate for a low purchase price with this Samsung.

Verdict
If you need a compact, personal laser printer, the Samsung ML-2165W has a very small footprint, but doesn’t sacrifice functionality for its small size. It’s quick, prints text and graphics well and can even handle direct print from phones and tablets. You don’t even pay over the odds for consumables.