What are the Samsung Level U Pro?

The Level U Pros are the premium collar headphones in Samsung’s current line up. They’re designed to be the ultimate companion for Samsung’s forthcoming Galaxy S7 and Galaxy S7 Edge smartphones.

They’re also waterproof and Samsung claims audiophiles will enjoy “Ultra High Quality Audio” (UHQA) when paired wirelessly to one of its top handsets.

However, with the jury still out on UHQ audio and wireless headphones general sound quality, can the Samsung Level U Pro’s justify their $99 (£70) price tag?

The Samsung Level U Pro’s have a fairly typical collar headphone design similar to the Tone Platinum wireless headphones set to arrive with the LG G5 later this year.

With the notable exception of the Audio Technica ATH-ANC40BTs, I’ve never been fully sold on collar, or wireless headphones for a variety of reasons. Chief of which is the fact they’re not massively comfortable to wear, especially when exercising. 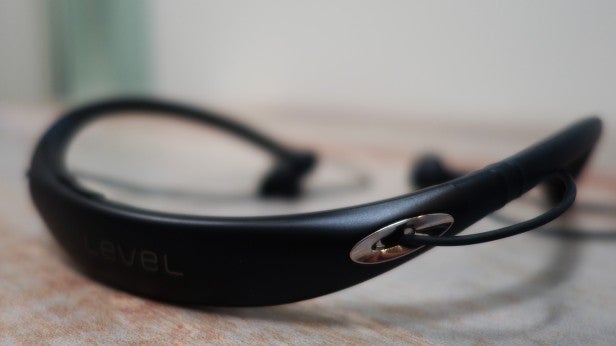 This partially remains true with the Samsung Level U Pro’s, though as collar headphones go they’re not bad.

The plastic frame feels a little cheap but is more than rugged enough for everyday use. For avid runners they’re also water resistant – though they don’t have an IP rating so you wouldn’t want to get caught in a downpour wearing them.

The plug covering the set’s microUSB charge port is also reasonably discreet and ensures the collar doesn’t look overtly chunky or out of place. Magnetic locks in the ear buds also make it easy to stop the cable flapping about when you’re not listening to music.

Along the Level U Pro’s right side you’ll also find the usual assortment of volume, play and pause controls typical to most collared headphones.

Wearing the Level U Pro’s on my commute to and from work, I found they’re reasonably comfortable to wear. Once I’d picked and loaded the headphones with the correct sized buds for my ears, the Level U Pro’s fit neatly around my neck and, despite not having active noise cancellation, were snug enough in ear to block out most background sounds.

I was also surprised how light they are. Despite featuring a large battery Samsung claims offers nine hours of music playback, the Level U Pro’s feel feather light.

Running with the headphones was a slightly different story. Like every collar set I test the headphones awkwardly jumped around on my neck. The bud’s seal with my ear also had an annoying habit of breaking, which created yet another distraction that stopped me finding my rhythm while running. I experimented with a variety of different bud sizes and didn’t find a single one that worked.

That said, these are issues I’ve had with all collar style headphones, save the Audio Technica ATH-ANC40BTs, which come with active noise cancellation. 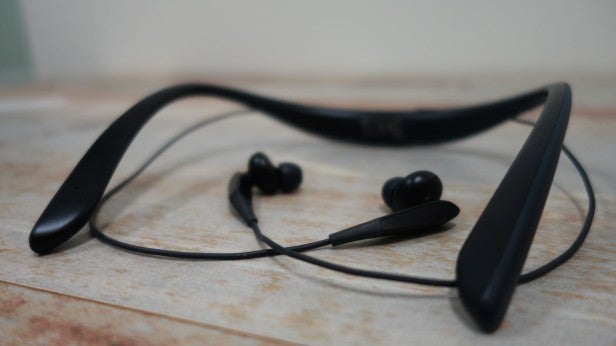 The Level U Pro’s UHQA technology is being marketed by Samsung as a key selling point. For those that missed it, UHQA is a bit of tech available on select Samsung smartphones, like the Galaxy S7.

I’ve always taken Samsung’s claims with a pinch of salt. The Galaxy S6’s UHQA “upscaling” tech made a best a negligible difference to general audio quality that 99% of people wouldn’t notice. What’s more, those that do will likely have invested in their own Hi-Res audio collection and a more expensive pair of cabled headphones.

However, when it comes to sound quality, as wireless headphones go, the Samsung Level U Pro’s are solid.

Paired with a Nexus 5X the earphone’s do a solid job not pushing any one end of the sound spectrum. The 13mm Dynamic and 13mm Piezo drivers deliver fairly well balanced, clear sound quality throughout my testing.

Bass, while not quite as punchy as the Audio Technica ATH-ANC40BT’s, is solid and delivers enough power to ensure audio doesn’t sound muted or flat. Listening to God is an Astronaut’s stellar Age of the Fifth Sun while running, the bassline powered through without clouding the music’s overall sound. 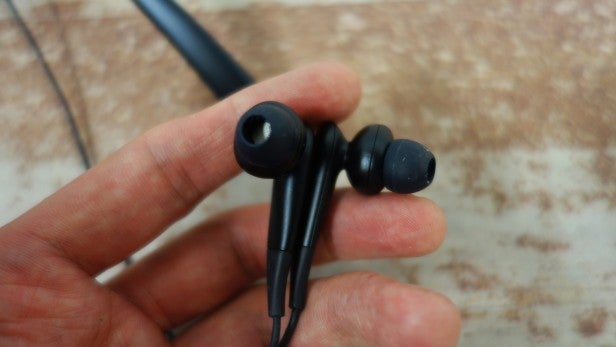 Chilling out to some of Chopin’s nocturnes, the notes were wonderfully clear, and felt had suitable clarity in both the low and mid-range.

My only issue with the Level U Pro’s sound quality stem from the way it handles high frequency sound. Treble’s have a tendency to sound forced and on certain types of music I definitely noticed sibilance creeping in.

Listening to the Clash, Mick Jones jangled guitar and Joe Strummer’s shouted vocals had a slightly sharp edge. The issue reared its ugly head again during a session listening to acoustic tracks from Nick Drake and Michael Hedges. Through the Level U Pro’s the two artists’ otherwise soothing folk tracks took on an unwanted, slightly harsh tone.

The is an issue I experience on every wireless set I’ve tested, so it isn’t a total deal breaker for the Level U Pro’s. It just reinforces my belief people interested in unparalleled sound quality should still opt for cabled headphones, especially when they’re thinking about shelling out over £50 for a pair.

The Level U Pro work with Samsung’s Android Level app. The app offers a variety of fairly useful features, including the ability to see the headphone’s current battery level. There are also controls for audio settings like bass and clarity.

It also includes controls for the Level U Pro’s call alert and notifications settings. Those that wish to can set the headphones to vibrate on their neck when incoming messages, calls or general alerts come in. If you fancy making your own two person silent disco, the app also lets you stream music from your smartphone to a second pair of connect Level U Pros, though I can’t honestly think why anyone would want to do this.

As an added bonus, the headphones also feature a dual-microphone with noise reduction and echo cancellation tech, so you can take calls on the Level U Pros. 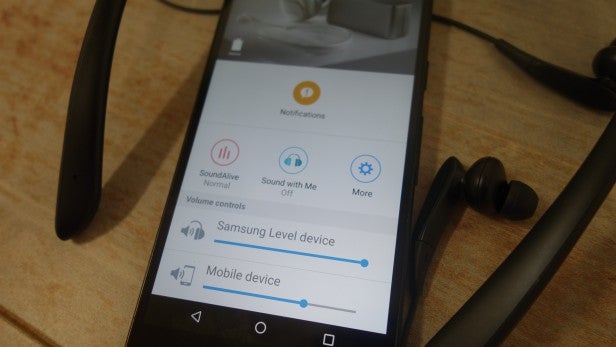 Should I buy the Samsung Level U Pro?

The Samsung Level U Pros are pretty good as wireless collar-style headphones go. They offer reasonable sound quality, feature a useful companion app, and water resistant design. Outside of the Audio Technica ATH-ANC40BT’s these are the best collar headphones I’ve tried recently.

However, I’m still not convinced about collar-design or wireless headphones in general. The design feels cumbersome, especially when you’re exercising. There are also significantly better value for money cabled headphone options out there, like the £60 Sennheiser CX 5.00s, that offer superior audio quality.

If you’re after collar-style, wireless headphones the Level U Pro’s are worth checking out.