With so many big screens with similar model names in its massive flat TV range these days, you could be forgiven for not even noticing that Samsung has now added the LE52F96BD to its big-screen offering. But this would be a mighty shame, for the reality is that this TV is anything but ‘more of the same’ from the Korean mega-brand. In fact, it’s arguably the most revolutionary LCD TV that’s so far passed through our doors. Honestly; we’re not just exaggerating in some desperate bid to keep you reading right to the end of the review (for a change?!). Its genuinely ground-breaking nature is just a simple fact, no more, no less.


Essentially, it’s all about the backlight. Now when you put it like this, I’ll grant you that this Samsung’s ‘big feature’ doesn’t sound all that exciting. But maybe if we point out that normal LCD TVs’ static, constantly on backlights are responsible for the vast majority of problems LCD technology has with showing video, then you might start to get an inkling of where we’re headed.


Take, for instance, normal LCD technology’s problems reproducing a convincing black level response. This is largely down to the fact that the need to keep a single backlight shining at all times means that even pixels that should be dark end up with a bit of the backlight creeping into them, resulting in the greying over effect we so commonly talk about in our reviews. 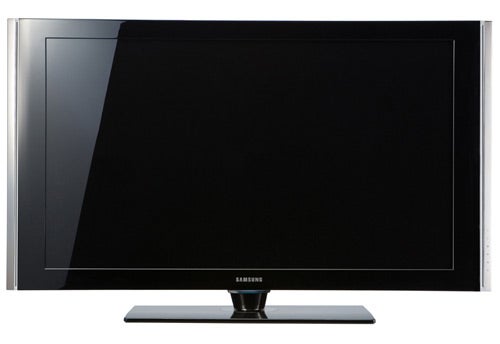 The always-on stationary backlight also has a negative impact on the presentation of motion. For the fact that the light can’t ‘scan’ like good old CRT technology means moving images are presented as a series of static frames rather than truly fluid, a situation that causes blur since your eye’s natural response is to track the average motion from one frame to the next.


As you’ve probably started to suss from everything we’ve said so far, the big trick of the LE52F96BD is that it addresses such backlight-related issues head on, by completely doing away with the solitary, constant backlight approach. Instead it lights its pixels using an array of LED backlights, all individually controllable.


The advantages of this approach are immediately clear. For instance, black levels should be much deeper, since LED-driven screens can completely remove light from dark picture areas, stopping the potential for light seepage to cause unwanted greyness. In fact, Samsung claims the LED system allows the LE52F96BD to produce a jaw-dropping – or should that be eyebrow-raising! – contrast ratio of 500,000:1.


What’s more, having an array of controllable lights opens up the possibility of recreating the scanning effect so key to CRT’s immaculate handling of motion. And as a final ‘bonus’ benefit, LED light sources tend to produce a noticeably wider, richer colour palette than standard lamp types.

Itching though we are to find out if all this fine theory has been turned into perfect practice at the first time of asking by the LE52F96BD, we’ve got a little more groundwork to go over first.


For instance, you really need to know how remarkably pretty this TV is for such a gargantuan effort – just in case you hadn’t picked up on this from the pictures we’re running.


It’s also phenomenally well connected. Heading things up are three HDMIs all made to the V1.3 specification, which is to say they are compatible with such v1.3-exclusive features as automatic lip-synching and Deep Colour (the as yet unseen but theoretically great system for delivering richer colours from specially mastered HD sources).


Also unusual is a USB 2.0 jack via which the TV can play MP3 and JPEG file formats, with other key jacks including a D-Sub PC port and a component video input.


Inevitably given its cutting edge status the LE52F96BD is a full HD screen, complete with 1:1 pixel mapping mode for the purest possible portrayal of 1080-line HD sources and 1080p/24fps support.

The picture processing at the LE52F96BD’s heart is Samsung’s Digital Natural Image engine which, like most rival systems, focuses its attention on improving colour saturations/tones and fine detailing, as well as providing further boosts to black levels and motion control.


You also get Samsung’s Movie Plus mode, with its bold but ultimately flawed (and therefore best switched off) attempt to make objects move across the screen more fluidly; and the equally problematic Edge Enhancer, with its tendency to over-stress rather than improve edges. Again, we’d suggest you turn this off.


There are still a few other picture tweaks at your disposal that we could mention, but frankly we’ve restrained ourselves for far too long already. It’s time to see just what a difference LED makes. And the answer is: a lot. In fact, if I was still five year’s old I might even say a very lot.


Take black levels, for instance. For once we have an LCD TV that really can produce a nearly true representation of black, with practically no trace of the misty greyness we’re now so accustomed to seeing. This makes dark scenes like the opening shots of Ocean’s Thirteen (on Blu-ray) look spectacularly dynamic and, for want of a better word, cinematic. Partly because the range between the screen’s peak whites and deepest blacks is so prodigious, but also because the effortless darkness portrayed contains more subtle detailing than you can usually make out, and as such helps pictures look more full of depth.

We’d expect black levels this good to also help a TV’s colours, and so it proves with the LE52F96BD. But that’s only part of the story, since as well as enjoying more natural tones even during dark scenes because of the black response, the LED light source also seems to produce markedly richer colours than we’re used to seeing from LCD TVs.


Turning next to the potential motion-handling benefit of LED technology, again the LE52F96BD doesn’t disappoint. There’s noticeably less blur over the swinging swords of King Leonidas’ men during the HD DVD of 300 than we’d normally see, for instance.


It has to be said that LED technology doesn’t suddenly make LCD motion completely perfect; there’s still a sense that some resolution is lost where objects pass across the screen. But it’s certainly a heck of an improvement. 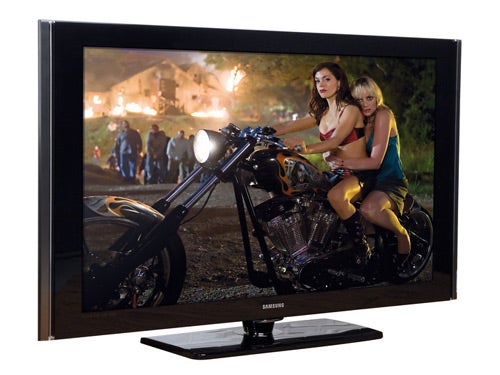 It’s pleasing to note, too, that nothing about the LED system appears to detract from the picture’s general sharpness. The 52in screen revels in eking every last drip of fine detail from quality HD moments like, well, pretty much anything on the BBC’s Planet Earth, as recorded onto a Sky HD box.


So how come, you’re probably wondering, the score for picture at the top of this review only reads a 9, not a 10? There are a number of small reasons. First and worst, the LE52F96BD’s picture doesn’t bear viewing from much of an angle; from even as little as 30 degrees or so you’ll start to notice pretty serious loss of black level.


The set is also rather uncomfortable with standard definition sources, tending to exaggerate any noise they may contain, and leaving skin looking a bit plasticky. Finally, just occasionally a slight greenish undertone creeps into dark scenes , seemingly without warning. But I actually found that I’d pretty much stopped noticing this by the end of my time (a few days) with the LE52F96BD.


So the LE52F96BD’s images aren’t totally perfect. But they’re remarkably close to it for what is, after all, a debut product based on a new technology. In fact, this has to be one of the finest technology debuts ever in this reviewer’s humble opinion, raising the very real prospect that one day LED backlighting just might become the default system of choice for the LCD industry as a whole. So long as they can get the price down a bit, that is…