Although we (nearly!) always welcome new technologies at TrustedReviews, when seemingly countless new innovations continue to appear around one particular core technology, as is currently the case with LCD TVs, a cynical little voice inside us sometimes wonders whether any technology that requires so much obvious effort to get working right is really the best one for the job in the first place.


We tell you this now not – we promise – as the introduction to a thorough slating of LCD as a TV technology. Our intention instead is to give you some indication of our ever-so-slightly jaded mindset as we took receipt of Samsung’s new 46in LCD TV, so that you can appreciate just how hard it had to work to earn the sort of marks you see splashed across the top of this review.


The ‘new’ technology Samsung is crowing about on its latest 46in LCD TV – the LE46F86BD – and which led to our momentary scepticism, is 100Hz. Regular readers will realise, of course, that this isn’t a new technology to LCD in general at all. A number of brands have tried it before, with varying degrees of success. But the LE46F86DB is certainly Samsung’s first stab at 100Hz – and given that the Korean megacorps allegedly refused to launch the technology earlier on the grounds that it couldn’t get it working as well as it wanted to, there’s definitely some pressure on it to deliver the goods. 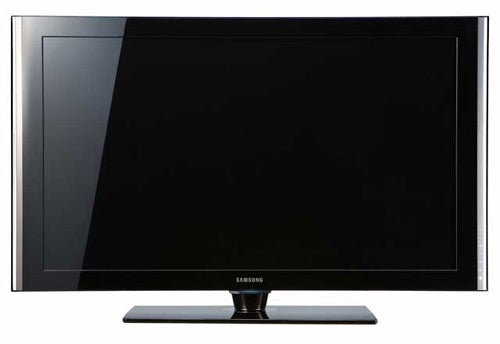 Why does 100Hz matter anyway? It’s all to do with LCD technology’s problems showing moving objects without reducing their resolution. Essentially LCD pixels just can’t react quickly enough to resolve motion properly in real time. So the idea with 100Hz is that by doubling the refresh rate of standard PAL images via processing, you can effectively reintroduce at least some of the motion resolution lost by LCD’s response time issues.


The argument appears to hold water in principal, and we’ve seen some pretty decent evidence of it working very nicely. But we’ve also seen moments when the system rather falls down due to conflicts with other elements of a TV’s picture processing, or a simple inability to work fast enough to keep up with the action. So here’s hoping Samsung’s processing system is up to the job.


Raising fears that it might not be is the full title Samsung has given to its 100Hz system: 100Hz Motion Plus. For this clearly refers to the Motion Plus system we’ve found fault with on previous Samsung LCD TVs. Motion Plus works in a similar way to 100Hz, by interpolating extra frames of image data to crispen up motion. But we’ve found that while Motion Plus does deliver on its promise, it only does so at the expense of some pretty distracting noise around the edges of moving objects. Hmm.

Before we set about explaining how the LE46F86BD sidesteps our concerns, though, we’ve got quite a bit more background to cover first. Starting with the TV’s design, which is a chip off the old Samsung block in its startlingly pretty gloss black livery, minimal finish and complementary curves and angles.


The TV is also prodigiously well connected, with three v1.3a HDMIs leading the way. Their 1.3 specification makes them compatible with the new HDMI automatic lip synchronisation and picture-boosting Deep Colour features – so it’s a pity there are currently no Deep Colour-encoded HD discs out there for us to try. Oh well, maybe they’ll appear some time in the future…


The set also carries a D-Sub port for PC use, component video inputs for progressive scan DVD players or analogue HD sources like the original Xbox 360, a digital tuner input and associated slot for adding Top Up TV to the Freeview Package, and last but not least a USB 2.0 jack through which you can play MP3 audio or JPEG image files direct into the TV. 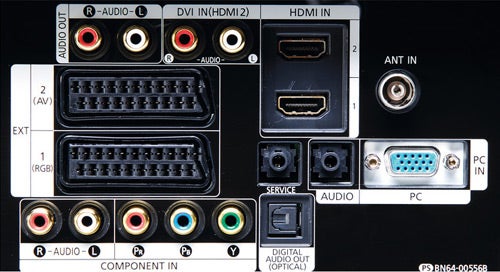 As you’d expect of a premium big-screen LCD these days, the 46F86BD is a full HD model, but without doubt its most intriguing on-paper spec aside from the 100Hz processing is a claimed contrast ratio of 25,000:1. Which is a whole 9000:1 more than even the figure quoted for Pioneer’s remarkable KURO plasma TVs.


To be honest this kind of suggests that Samsung has been pretty ‘generous’ with its measuring criteria when deriving a contrast ratio, rather than leading us to expect better black level response than you get with the KUROs. But at the same time it at least raises expectations of some of the best black levels yet seen on an LCD TV.


Other bits and bobs of interest include compatibility with the 1080p/24fps format now output by a growing number of HD disc players, Samsung’s Digital Natural Image engine processing for boosting colour, contrast, motion handling, and fine detail, and an unusually wide-ranging set of picture tweaks including gamma adjustments, an edge enhancement option, and a black level booster.


We said earlier that the 46F86BD’s performance managed to shatter our initial cynicism, and here’s how it did it.


First of all, its 100Hz processing falls squarely in the ‘success’ camp, in that while its benefits are slightly more subtle than those of some rivals, it also suffers with pleasingly few negative side effects. So as yet another American player leaps in front of me with a rocket launcher or gravity hammer on Halo 3, they do so smoothly and in considerably greater clarity than on non-100Hz TVs. And I don’t know about you, but I sure love being able to see the person who’s about to kill me as clearly as possible… 

If you’d prefer a film example, the unfortunate folk aboard the HD DVD of Poseidon fall around much more clearly as the ship capsizes than they would without 100Hz to help.


Even better, the improvements in clarity are delivered without the edge ‘feathering’ that blights Samsung’s Movie Plus system. In fact, other than a rare ghosting effect around very small, very fast moving objects, like a mid-flight golf ball, the 100Hz engine runs as cleanly as a whistle.


Turning our attention next to that outlandish 25,000:1 contrast ratio claim, it does, of course, end up looking insanely optimistic. But – and it’s a healthy but – that doesn’t mean the 46F86BD’s black levels aren’t very good indeed by LCD standards. In fact, they’re quite possibly the best black levels we’ve yet seen on an LCD TV.


Dark parts of the picture actually can look something like black rather than grey as is the case with most LCD screens. What’s more, they retain more shadow detail than normal, which helps dark scenes enjoy a better sense of depth. 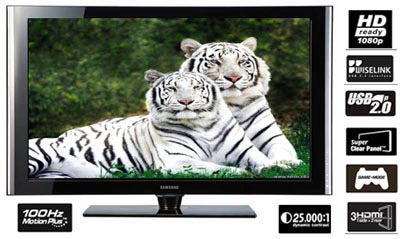 Good black levels usually mean good colours, and lo and behold, the 46F86BD’s colours are first rate. The vibrant hues of, um, Chicken Little (look, animated films on HD discs are in short supply right now, OK?!) blaze off the screen, but at the same time the range and subtlety of the set’s colour response is such that quieter tones, like the skin of the actors as they swim for their lives late on in Poseidon, nearly always look completely natural.


The set’s full HD resolution also plays its part in the 46F86BD’s colour talents, as the extra pixel density enables it to produce extremely fine blends with none of the striping effect seen with lesser TVs.


Not surprisingly the full HD pixel count makes its presence felt, too, in the 46F86BD’s presentation of fine detail. With HD sources the image looks superbly sharp and replete with texture, as the set delivers every drop of picture data on offer. It helps, too, that there’s no significant video noise to get in the way of the detail, thanks to the processing-free mapping of the UK’s 1,920 x 1,080 HD sources to the screen’s 1,920 x 1,080 pixels.


Before we try and dig out some dirt on the 46F86BD’s pictures, its sound also deserves a round of applause. The speakers produce a really lovely crisp, detailed but above all well-rounded soundstage that leaves most flat TV rivals sounding flimsy and insipid by comparison.


And so to that dirt we mentioned. Really, this is pretty much limited to two things. First, while we generally like a lot of what the 100Hz engine does, it only really gets to grips with moving objects within a frame. If the entire frame moves, as with a camera pan, there’s still a little judder in backgrounds, that if anything is slightly highlighted by the 100Hz-inspired smoothness of everything else.


Our other concern is that it’s possible to make really quite a mess of pictures if you’re not unusually careful with the 46F86BD’s many image options. We’d certainly suggest that you start by trying to keep image processing elements like the 100Hz, noise reduction and Edge Enhancement tools set to low levels rather than anywhere near their maximums. In fact, Edge Enhancement is probably best left off entirely, now we come to think about it.


Provided you put the effort in up front to get the 46F86BD’s pictures looking their best, it will reward you with a truly scintillating LCD performance that gets closer than arguably any TV before to laying to rest those ‘LCD is only good for PC monitors’ ghosts once and for all.