We’re pretty sure there are plenty of free-thinking readers out there who’ve yet to be convinced by the TV world’s current fascination with 3D. Or at any rate, there are plenty of you not convinced enough to cough up the currently very hefty sums of cold, hard cash demanded by every 3D TV we’ve seen to date.


Which is precisely why Samsung’s LE46C750 could potentially be so important. For while every other 3D TV we’ve seen has struggled to get below the £2k price level, we’ve found this Samsung 3D set going for only slightly over a grand. A fact which becomes even more remarkable when you consider that the LE46C750 has a whopping 46in screen rather than being some ‘paltry’ 37-40in effort.


What this price effectively means is that you could easily just buy the LE46C750 as a good value 2D telly, and treat its 3D abilities as an optional extra that you can take or leave as you wish. Excellent. Or at least it will be excellent if the TV is actually any cop. 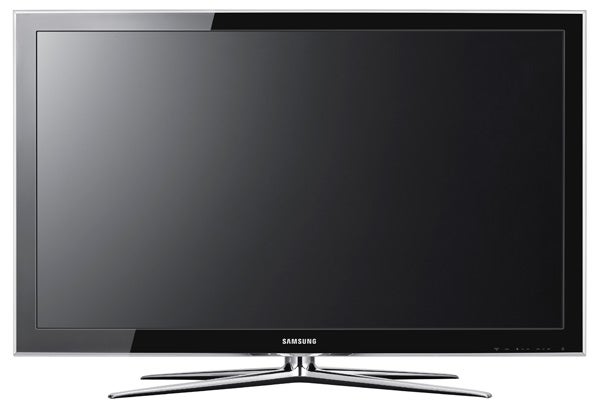 Accustomed as we are now to seeing Samsung’s name attached to TVs of almost supernatural slenderness, the rather hefty butt on the LE46C750 comes as a bit of a shock. But in true Jennifer Lopez style, the fact that the LE46C750’s ‘got back’ doesn’t preclude it from being something of a looker. For its bezel is appealingly glossy and minimalistic, futuristically angular (for yes, in our vision of the future, everything is angular!!), and wrapped up rather cutely by a see-through outer trim.


There’s also a good solid technical reason for the LE46C750’s relatively chunky profile, namely that rather than the edge LED technology Samsung has embraced so successfully, the LE46C750 uses good old traditional CCFL backlighting. This goes a long way in itself to explain just how the LE46C750 is so much cheaper than the rest of the 3D TV fraternity.


Don’t get to thinking that the use of ordinary CCFL lighting in the LE46C750 is a sign that Samsung has skimped on features generally, though. For starters, the set features what Samsung calls 400 CMR processing. Clearly meant to evoke the 400Hz processing claims being bandied about – inaccurately – by some other brands without being quite so technically misleading, the 400CMR system actually comprises a true 200Hz engine in conjunction with a scanning backlight.


This system is great to find on such an affordable 3D TV, since it should help counter the sort of LCD motion blurring problems that tend to be emphasised when you’re watching 3D material.


The LE46C750’s connections are also more plentiful than you might expect of a TV that’s trying to keep its price down. There are four HDMIs for a start, built to the v1.4 3D-capable spec. It’s good to see, too, that the RF input feeds a Freeview HD tuner rather than just a standard definition one, and that Samsung has gone to the trouble of making the set a true multimedia centrepiece via an Ethernet port and two USBs.

The USB ports allow you to playback a wide variety of photo, music and video file formats, and additionally let you make the TV Wi-Fi capable if you fork out extra cash – £40-£50 – for Samsung’s optional Wi-Fi USB dongle. Please note that also, like Samsung’s premium edge LED 3D TVs, you can record from the Freeview tuner to USB HDDs.


The Ethernet port is part of the Freeview HD spec. But Samsung doesn’t restrict its use to future Freeview HD interactive services. For the jack can also stream files from a DLNA PC, or pipe you into Samsung’s Internet@TV online service.


Internet@TV has undergone some pretty major improvements recently, with the addition of both LoveFilm and the BBC iPlayer. This brings it much closer to Sony’s still class-leading Bravia Internet Video online TV platform.


The 46C750’s apparent desire to connect with as many other devices as possible is wrapped up by its AllShare feature, designed to enable communication and data/alert sharing with compatible mobile phones, portable media players and so on.

The LE46C750 goes much further than we would have expected, too, with its picture adjustments. Our personal favourite of these is the system provided for adjusting the strength and judder/blur emphasis of the TV’s motion compensation processing. But we also got mileage out of a (rather basic) colour management tool, a gamma adjustment, and various sharpness and contrast boosters. We would urge caution with at least the sharpness and contrast boosters, though, for simply thoughtlessly shoving them to their highest setting will actually damage the picture rather than improve it.


The only bum note in the LE46C750’s feature make-up, really, is the fact that it doesn’t ship with any of Samsung’s 3D glasses as standard. You can get one pair if you register the TV online as part of a current promotion, but any more will need to be bought separately for £80-£100 a pop. This fact clearly reduces the TV’s extreme value, though even if you have to buy three extra sets of glasses, the all-in price still comfortably undercuts its 3D rivals.


Let’s kick off the performance section of this review by focussing on the LE46C750’s 3D performance first.


Actually our use of the word ‘focussing’ back there was a tad unfortunate. For actually the LE46C750‘s 3D picture joins that of its LED Samsung siblings in suffering quite noticeably with crosstalk noise. There’s clear evidence of the tell-tale double ghosting of some objects in the mid to far distance, and as usual this reduces the perception of clarity with the 3D picture, as well as making 3D viewing more tiring as your eyes try to refocus the ghosted images back together.


To be fair, the issue isn’t significantly worse than it was on Samsung’s C8000 model – but it’s definitely more obvious and common than it is with Panasonic’s plasmas. Though of course, those plasmas start at roughly twice as much as the LE46C750.


In other ways, the LE46C750’s 3D efforts are surprisingly impressive. For instance, the TV really punches up the brightness and colour saturations, so that even through the inevitable dulling effects of Samsung’s active shutter glasses the picture still looks rich and vibrant. In this respect it’s actually slightly better than Panasonic’s rather brightness-challenged 3D efforts.

Motion looks surprisingly crisp too, with the 400Hz – sorry, CMR! – system doing a fine job of reducing LCD’s usual troubles with losing resolution when showing moving objects. Even the trickiness of handling motion in a three-dimensional environment doesn’t cause the processing too many headaches. That said, we would only recommend using the motion processing on its ‘Clear’ setting, as anything higher – including Standard – can cause noticeable side-effects such as flickering and shimmering around moving objects.


Finally, where a 3D scene isn’t afflicted with serious crosstalk noise, the picture’s brightness helps reinforce how much crisper and more detailed Full HD 3D sources look than side by side ‘passive’ ones. There’s even an obvious resolution difference between Sky’s near-HD side by side 3D broadcasts and the full-HD-to-each-eye 3D monty from 3D Blu-rays. 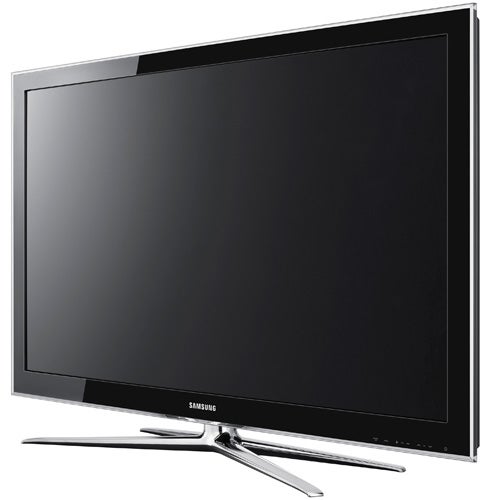 The LE46C750 happily proves to be a very talented performer with 2D material. The colour and brightness strengths noted with 3D material are abundantly evident with 2D too, allowing HD and standard def material alike to look potent, dynamic and engaging. What’s more, there’s no serious reduction in colour tone credibility when switching from HD to standard definition, unlike some Samsung sets of the past. Add to this the way the LE46C750 upscales standard def with plenty of detail while cleverly eking out video noise, and it’s clear Samsung has now exorcised its old standard def demons.


It does the LE46C750’s colour reproduction no harm at all that its black level response is also unusually good for a CCFL LCD TV. The backlight is consistent right across the screen, and dark scenes appear with impressively less greyness over them. Inevitably the set has to sacrifice a little shadow detail to make such a black level response possible, but the screen’s innate contrast is sufficient to avoid the hollow ‘black holes’ that characterise many CCFL LCD TV’s darkest bits.


The only time the LE46C750’s contrast falls down is if you have to watch the set from any significant angle – 40 degrees or more. Then the picture bleaches out quite severely.


If you can avoid this one significant shortcoming, though, the LE46C750 comfortably outperforms its price point even just as a 2D screen. So it’s value rating goes through the roof with the 3D stuff taken into account.


Even the LE46C750’s sound is pretty acceptable. There’s certainly more power and mid-range openness than we heard with any of Samsung’s 2009 flat TVs, and a more rounded tone than you get from Samsung’s super-slim edge LED models.


If you’re looking for a dream budget answer to your 3D prayers, the LE46C750 isn’t quite it. It suffers from too much crosstalk to really show 3D off to its best advantage, and not having any 3D glasses included as standard in the price is frustrating.


That said, its 3D performance isn’t really significantly worse than that of many LCD/LED TVs costing more than twice as much. And more importantly, its 2D performance is more than enough in itself to justify the set’s startlingly low entrance fee.