Having recently checked out new plasma and LED TVs from the premium end of Samsung’s current, expansive TV range, we thought it was time we turned our attention to its premium LCD offering – as modelled for us today in supremely attractive fashion by the 46in LE46A756.

Although we accept there are those among you who just can’t stomach the ‘touch of red’ design effect sported by Samsung’s A656 and A756 TVs, the LE46A756 is actually the fifth TV I’ve seen with the tinge of red in the bezel, and I personally still lap it up as much as I did the first time I clapped eyes on it. Especially when you add in the ultra polished, glossy feel given to the whole TV by the glass layer sitting on top of the screen frame.

I’m also inclined to lap up the 46A756’s connections, particularly their inclusion of four HDMIs, a USB port, and an Ethernet socket. Regular readers will know that these latter two jacks are especially significant on the 46A756 because they provide the means for the TV to access the Internet. Or at least, a Yahoo-sourced corner of the Internet that’s been designed to provide ‘live’ content to Samsung’s Internet TVs. 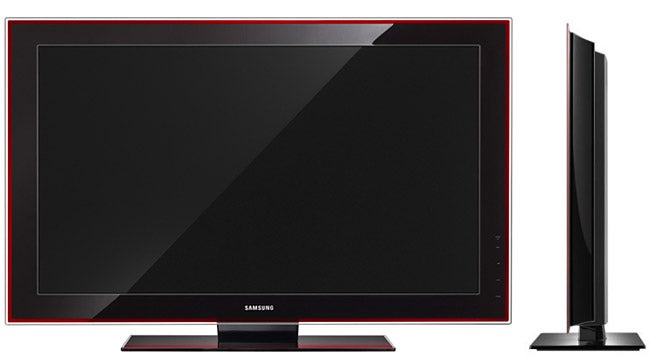 The Ethernet jack is pretty self-explanatory in this regard, simply enabling you to hardwire the TV into your router or broadband ‘pipe’. The USB, meanwhile, can allow you to jack the TV into your network wirelessly, courtesy of an optional (£20) ‘Linkstick’ dongle.

My painful experiences with getting other Samsung online TVs working properly meant that this time I actually didn’t have to spend too long getting the LE46A756 talking to the remote Yahoo server – though I still had to turn my router’s PING protection off temporarily. However, I’d recommend that anyone trying to get this TV online wirelessly for the first time should set at least a frustrating hour aside – unless you happen to be particularly IT-literate.

The rewards for your online efforts are arguably a bit more limited than you might expect, in that you certainly don’t get full Internet access. Essentially you’re just given access to news tickers, fuller news stories, stocks and shares updates and weather reports. But you can at least choose your weather report by region, and set favourite lists for stocks and shares. Plus this is probably just the start for this feature, with other features likely – hopefully! – set to appear in the future.

It’s worth adding before we move onto other matters that the LE46A756’s USB and Ethernet jacks are also notable for being able to play JPEG, MP3, and various film multimedia files from USB storage devices or even a connected PC. In fact, the Ethernet is DLNA-certified, for full access to your PC multimedia files via the TV’s remote.

As if all this wasn’t cutting edge enough, the LE46A756 has one other major innovation up its sumptuous sleeves: The Content Library. Tucked away in a hefty chunk of built-in memory is a diverse amount of pre-loaded multimedia content, ranging from cooking recipes to animated children’s stories, a selection of photos you can use as screensavers, sing-a-long children’s songs, exercise routines, and even some (very basic) games.

However, although this stuff is for the most part as beautifully presented as it is innovative, I’m not wholly convinced about how much of it most people will really bother with on a regular basis. But as with the online connectivity, it nonetheless feels like another early glimpse of the future of TV, as well as making for a great after-dinner conversation piece.

The LE46A756’s screen boasts a Full HD resolution, as you’d expect these days, together with an eye-catching contrast ratio of 70,000:1 – the highest figure I can remember seeing on a non-LED LCD TV.

Also on hand is a seriously wide-ranging set of tweaks for getting pictures to look exactly how you want them. Probably the most significant of these tweaks is a 100Hz Motion Plus system that both doubles the image’s frame rate and introduces new frames of image data to make motion look more fluid as well as more detailed. 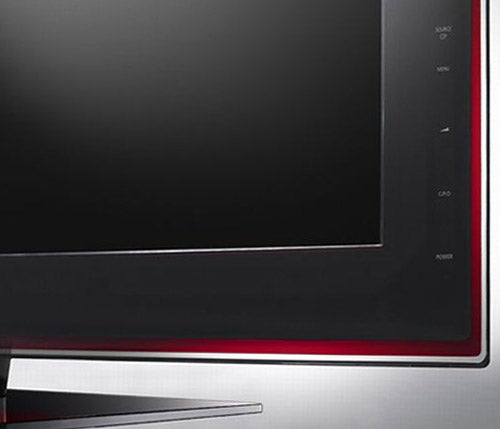 Also of note are noise reduction routines, a black level booster, a skin-tone adjustment, an edge enhancement processor, backlight adjustment, a gamma adjustment, and white balance adjustment – but there are still other things to have a go at if you really haven’t got anything better to do!

The recent Samsung plasma and LED sets I mentioned at the start of this group test have all proved very impressive. And happily the LE46A756 makes it a clean technology sweep, with one of the finest ‘straight’ LCD picture performances I’ve seen.

Particularly impressive are the profound black levels the set can achieve. As Batman and Rachel are pursued through Gotham at night by the police in the ”Batman Begins” Blu-ray, the night sky looks remarkably free of the usual LCD greyness, helping give the scene real credibility; the cinematography a superb sense of depth; and the picture overall a degree of dynamism that really does put most LCD rivals in the shade. Or to sum things up more succinctly, dark scenes on the LE46A756 look stunning to a degree not usually seen outside of the plasma or LED world.

In fact, although the LE46A756’s black levels aren’t as profound as those of Samsung’s LED-based LE55A956, they don’t suffer with the LED model’s occasional ‘blooming’ problem around bright image elements, and so I suspect some people might prefer the LE46A756’s approach to all things dark.

Another spectacular success of the LE46A756’s pictures is how sharp and detailed they look when showing HD. The breathtaking image quality of the first six minutes of ”The Dark Knight”, filmed using IMAX cameras and included as a bonus feature on the ”Batman Begins” Blu-ray, is delivered with exceptional panache by the LE46A756 thanks to a combination of impeccable fine detailing, perfectly blended colours, and perhaps most exciting of all, precious little in the way of either motion blur or the sort of visual artefacts often caused by motion-enhancing processing.

I should clarify here that you do have to be a little careful with the TV’s settings to achieve this impressive motion. In particular you should only have the 100Hz Motion Plus system set to its ‘Low’ level, for pushing it higher invariably results in clear glitching around edges, while leaving it off altogether results in judder and a generally less distinct look to moving objects.

I’d also recommend using the Standard image preset (not the awful Dynamic one) with contrast set between 75-80, the backlight set around 5, the brightness no higher than 50, Dynamic Contrast set to Low, the black adjustment switched off, and finally the Edge Enhancement tool set off too, as to me this over-exaggerates contrasty edges and makes the image look inconsistent and rough as a result. 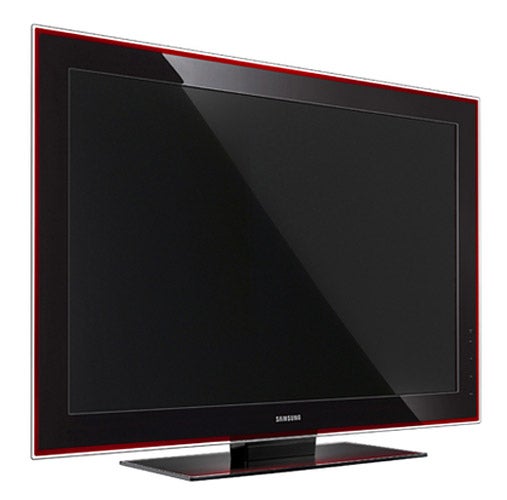 Follow the above measures and as well as the picture looking stunningly sharp and rich in black level, it will also enjoy a scintillating combination of vividly saturated but also unusually natural colours. Maybe the colours produced by Philips’ Wide Colour Gamut sets (such as the 42PFL9703D) are even more expressive still, but it’s a close run thing. And don’t forget that this Samsung set costs considerably less than an equivalent-sized 9703 model.

I do have a trio of gripes with the picture, though. Firstly, there’s one traditional LCD weakness the LE46A756 has not been able to overcome: an uninspiring viewing angle. Watch from 45 degrees or more, and the familiar problems of diminishing black levels and colour saturations set in.

Secondly, I found the screen to be a little more reflective of ambient light in my test room than most TVs I see these days, to a degree that really could become tiresome if you happen to have one of the lights in your room positioned in such a way that it’s likely to be reflected by the LE46A756.

Finally, there’s occasionally a sudden moment of edge smearing even with the 100Hz Motion Plus system correctly set. But thankfully these moments are seldom truly distracting, and so the positives of the system far outweigh the negatives.

The LE46A756 isn’t nearly as outstanding sonically as it is visually. There’s a bit more of an open feeling to the soundstage than we noted with Samsung’s A656 and lower models, but a shortage of deep bass and a tendency to sound thin during action scenes still keep it out of the audio A-list.

The LE46A756’s lovely design proves to be an entirely appropriate portal into a world of LCD picture quality that’s up there with the very best we’ve seen. What’s more, the set’s feature count is as prodigious as it is groundbreaking, and its price really isn’t out of the way at all considering what’s on offer. In other words, the Samsung boys have done good. Again.