When you’re as stunning to look at as Samsung’s A656 LCD TV range, it usually follows that the bigger screen size you’ve got, the more striking you look. And so it proves with the LE46A656A1 (which I’ll refer to as the 46A656 from here on)

For at 46in across, this is comfortably the largest A656 model we’ve looked at to date. Yet it’s also, for my money, the prettiest. The gorgeous hint of deep red tucked within the screen’s glass-fronted dark bezel really does look lovely at this size – especially in the way the red hue becomes slightly more overt the further towards the edge of the bezel you go. 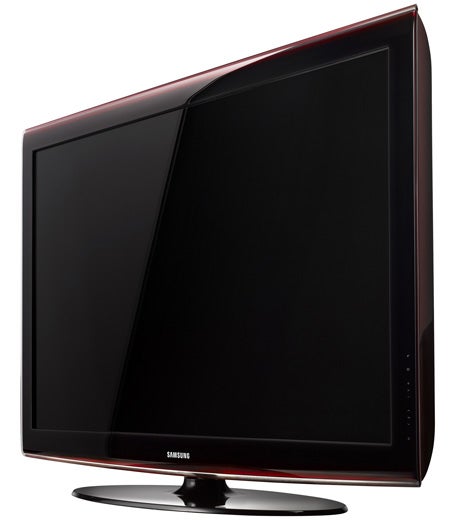 It’s worth adding, too, that the 46A656 is put together without any glue or rivets – a remarkable achievement that packs even more aesthetic punch on a 46in TV than it does on the smaller 32in and 40in models we’ve looked at previously.

Don’t think for a moment, though, that the 46A656’s stunning exterior is designed to distract you from an under-developed heart. In fact, this set is one of the best-featured models around right now.

Its connections, for instance, include a superb four HDMI sockets, all built to the v1.3 specification, with Deep Colour compatibility, CEC functionality (for control of compatible sources via the TV’s remote), and the ability to receive the 1080p/24 sources now available from most Blu-ray players. Splendid. 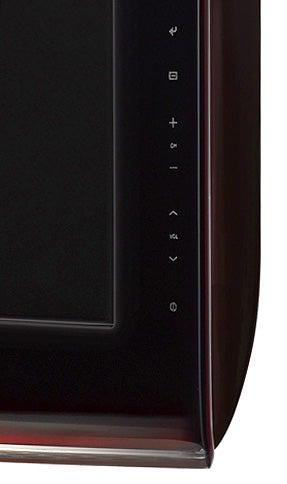 These four HDMIs come on top of all the usual goodies, of course, such as a component video input, a D-Sub PC input, an optical digital audio output, two SCARTs, an S-Video input, and a composite video input. Plus there’s a further unusual finding in the shape of a USB 2.0 port for playing back JPEG stills or MP3 audio files.

Inevitably for a premium TV of such a prodigious size, the 46A656 incorporates a 1,920 x 1,080 Full HD resolution, and promises a supremely high contrast ratio of 50,000:1. This figure is made possible by a) the assistance of the inevitable dynamic contrast system, where the TV’s backlight is dimmed to boost black levels during dark scenes, and b) some proprietary filtering technology in the screen itself, which drastically reduces contrast-spoiling reflections.

Heading up the 46A656’s other features is 100Hz processing, which doubles the normal PAL refresh rate in a bid to reduce LCD’s problems with portraying motion, whereby resolution is lost over moving objects.

While this sounds good news on paper, we have seen one or two 100Hz systems cause more nasty processing side effects than we’re comfortable with. Even more scarily, some previous Samsung stabs at improving the appearance of motion on its LCD sets, such as Movie Plus, have proved distinctly unimpressive.

On the upside, the 100Hz system has proved pretty effective on the 32in and 40in A656 models, so hopefully it will stretch that bit further and also hold up to scrutiny at 46in. 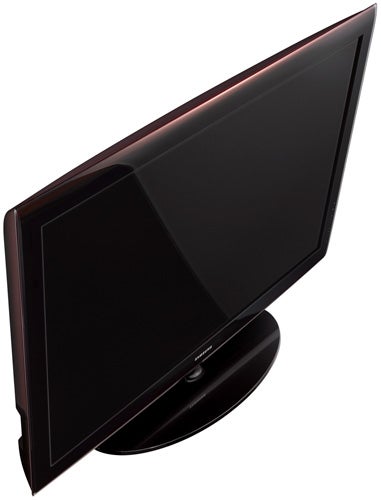 Settling myself down for a few hours in front of the 46A656’s colossal but still oh-so-cute screen, two things become apparent right away. First, the 100Hz engine is still very good indeed. But second, the picture overall doesn’t look quite as pristine as with the smaller A656 models.

To test out the 100Hz fully, I fed the set a combination of the recent England/New Zealand test cricket and the Blu-ray release of the kinetic ”Pirates of the Caribbean”. And I’m happy to report that with the cricket, as the ball scooted away to the boundary for Four, its motion was smooth and crisp, and it wasn’t affected by the sort of ghosting artefacts seen with some rival 100Hz systems. And with Pirates, Johnny Depp’s swashbuckling foppery never puts a blurry foot wrong.

The 100Hz system isn’t completely perfect; some edges gain an unwanted gentle halo around them at times, and one or two really, really fast patches of movement can flicker. Plus the system can make pictures look over-processed if you choose its ‘High’ option. But on the low or medium setting the positives far outstrip the negatives, and that’s enough to make this reviewer at least very happy.

Many of the other familiar A656 picture strengths remain, too. The HD images from the ‘Pirates’ Blu-ray look outstandingly crisp, textured and sharp, for instance, with the purity of the Samsung processing allowing you to revel in the screen’s Full HD resolution.

Then there’s the 46A656’s black level response. For starters, the automatic contrast system is a vast improvement on any such system Samsung has utilised before, ensuring that you aren’t distracted by obvious brightness ‘jumps’, even during the sharp contrasts between bright and dark shots during the fight in Barbossa’s treasure cave. Even more importantly, though, the screen can deliver much deeper, richer blacks than the vast majority of its current rivals. Needless to say this works wonders on a beautifully mastered, contrast-rich movie like ‘Pirates’.

Good black levels usually sit side by side with good colours, and so it proves on the 46A656. Saturations are often intense, while tones are generally among the most natural yet seen on a big-screen Samsung LCD TV. 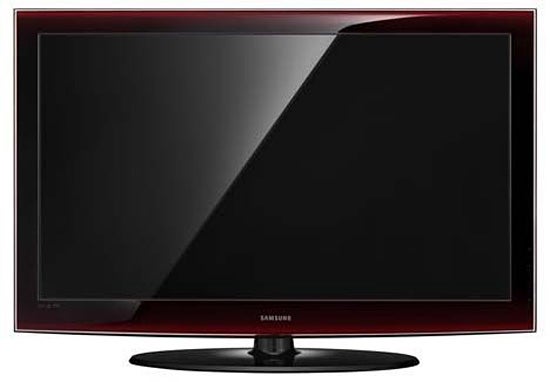 There are two areas where the 46A656’s pictures fall a fraction short of the heights enjoyed on the smaller screens, though. For starters the extra inches highlight a slight noise issue when watching standard definition – or, at least, low-quality standard definition sources such as an outdoor broadcast on ”Sky News”. MPEG artefacts from the digital tuner can look rather obvious, and the picture generally suddenly becomes a touch mushy, for want of a better word.

The other point is that the image doesn’t look quite as dynamic as those of its smaller brothers, with less brightness and seemingly slightly less colour intensity.

At this point it should be said that the 46A656’s pictures are still hugely impressive by big LCD standards. But I didn’t fall in love with them to quite the degree I did with the smaller models – especially the 40in set.

It’s also worth adding that the 46A656’s pictures also, like those of its siblings, suffer badly if you don’t switch the set from its crazily OTT Dynamic preset. And its sound follows the lead of the smaller sets too in feeling clear and detailed, but slightly underpowered for the size of screen on show – a result, perhaps, of the need to make the set’s speakers invisible to preserve the integrity of the design.

The LE46A656’s extra inches make it an even more potent design statement than its smaller siblings, and it seems good value too at under £1,250. But although its pictures are capable of some truly spectacular moments, especially with HD material, they’re not quite as consistently awesome or as at home with standard definition as we’d hoped they would be.