With Samsung’s big LED screens scooping all the headlines right now, I can’t help but wonder if I’m going to be left feeling a little ‘meh’ – to probably misuse one of today’s trendy phrases – by the LE32B650, one of the smallest members of Samsung’s ‘standard backlight’ LCD TV range.

It’s just as well, then, that the LE32B650 starts its charm offensive right away, with its sumptuous design. The application of a transparent ‘crystal’ sheet over the black bezel gives it a touch of genuine class, especially as that crystal sheet extends beyond the black bezel by a centimetre or so, and curves seductively around a sort of ‘wave’ effect along the TV’s bottom edge. Even the desktop stand looks distinctive, thanks to its see-through neck. 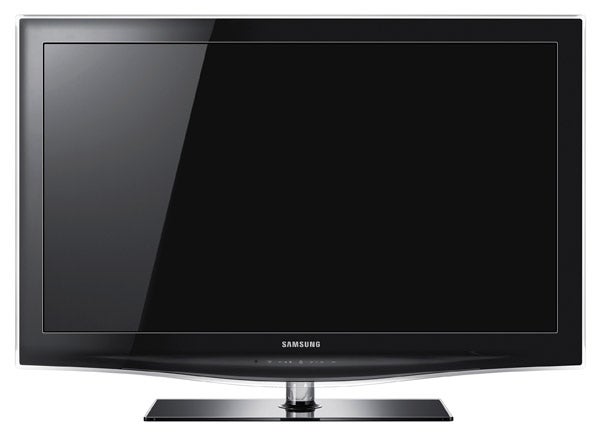 The 32B650’s side and rear are as attractive as its front if you’re a fan of connections. Particular boat-floaters are four HDMIs, an Ethernet port for accessing either Samsung’s Medi@2.0 online service or a networked PC, and not one but two USB ports, both able to play a variety of photo, music and video file formats. One of the USBs can even accept a full-blown USB HDD device or you can get hold of an optional dongle that enables you to access Samsung’s online functionality wirelessly.

If you’ve managed to miss our recent reviews of other new Samsung TVs, the online functionality we’re talking about comprises a controlled environment of content – as opposed to full Internet access – specially designed to be operated via a normal TV remote and interface.

This ring-fenced approach may disappoint die-hard surfers, but it probably makes sense for most TV users – even though Philips did a surprisingly good job of integrating full Internet access into its recent 32PFL9604. 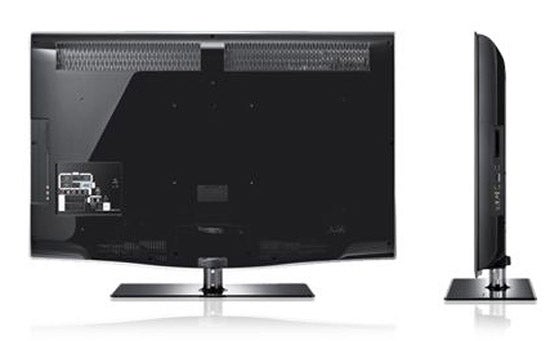 I have to say that for some reason I experienced persistent connection difficulties with the Yahoo services during my test period with the 32B650, even using a wired link to my router. All I can think is that the Yahoo servers must have been having a bad couple of days.

If the online features aren’t sufficient for you, then maybe the 32B650’s built-in Content Library will sort you out. This contains, on flash memory, a gallery of screen saver photos and artworks, recipes, games, children’s songs and animated stories, and various audio tracks to aid meditation and relaxation (!). You can add a little content of your own to this ‘library’ too, if you so desire.

Personally, I have to say I didn’t feel inclined to revisit anything in the Content Library after my initial exploration of it, but I guess there’s always scope for more interesting stuff to be added in future incarnations of the system.

Turning to slightly more prosaic but no less important features of the 32B650, it’s got a Full HD resolution, Samsung’s ever-present DNIe video processing, and a 100Hz engine to boost motion reproduction.

As with all B650s, the 32B650 uses Samsung’s Ultra Clear Panel II technology, which uses a proprietary polarising sheet in the screen design to reduce reflections by 30 per cent and pretty much remove the usual surface ‘haze’ caused by ambient light in your room. This stops ambient light from reducing the image’s contrast.

Samsung’s 6 series models additionally use a so-called Wide Color Enhancement 3 system to deliver 92 per cent of the HD colour standard, versus 85 per cent with lower-spec Samsung models. 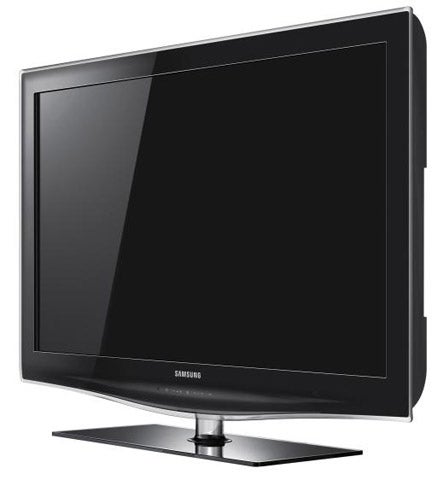 The 32B650’s attractive onscreen menus have plenty of tweaks to keep tinkerers busy, too. Among the highlights here is a new (to Samsung’s 2009 LCD range) Natural video preset, which adds a unique adaptive contrast enhancer element to the processing in a bid to boost detailing, definition and depth, especially during dark scenes.

I was also rather pleased to find that Samsung’s 100Hz engine isn’t just left to do its thing automatically. For as well as being able to switch it on or off as you wish, you can select a couple of different presets for it, affecting how heavily it’s applied to the picture. For instance, there’s a processing-heavy Smooth mode that works harder to make the image look more fluid at the cost of more processing side effects, or else there’s a Clear mode that reins the processing in to deliver a less pronounced smoothing effect with motion, but no processing side effects. 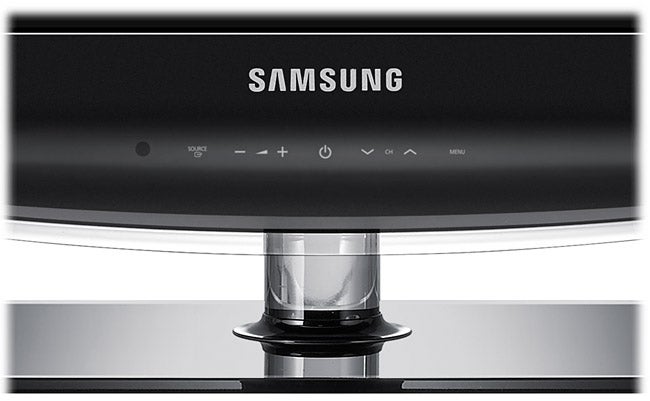 There’s also a Standard mode that sits somewhere between the other two modes, and best of all, you can even adjust – via sliding bars – the extent of both the blur and judder reduction elements in any of the 100Hz modes.

From my own playing, I generally preferred the Clear setting, with the judder element slightly increased and the Blur element slightly reduced from the factory presets. But feel free to experiment yourself. The main point is that the flexibility is there for people brave enough to use it.

Actually, I think you should be brave enough to venture into the 32B650’s onscreen menus for a while when you first get the TV. For as noted in previous Samsung reviews, the set’s presets don’t seem especially well thought through – even the new Natural mode.

With this in mind, it’s a pity the 32B650’s onscreen menus aren’t very logical. Particularly weird is the provision of separate Advanced Settings and Picture Options sub-menus, when they both seem to carry useful tricks that surely could have been lumped together in a single menu.

The really good news, though, is that the 32B650 rewards your setup efforts with some excellent picture quality. The 100Hz processing, for instance, reduces judder during camera pans, and makes moving objects look marginally less blurred. And it does so without throwing up distracting flickering or shimmering artefacts, so long as you stick with the ‘Clear’ 100Hz setting. It should be added, mind you, that the screen doesn’t smear with motion at all badly even with the 100Hz engine turned off.

The 32B650’s colours benefit from the extra gamut afforded to Samsung’s Series 6 models too, combining exceptional intensity and vibrancy with natural and subtle tones, so that the picture looks as convincing with ”EastEnders” as it does with ”Shrek”.

There’s no obvious sign of striping in the screen’s colour blends either, and skin tones are subtle enough in their shading to avoid the plasticky appearance found with many smallish LCD TVs.

Less easy to determine with certainty is the benefit of having a Full HD rather than HD Ready screen on the 32B650. Not because its HD images don’t look very sharp and clean; they do. But I’ve seen some of Samsung’s non-Full HD 32in TVs deliver very crisp HD pictures too, and I’m not sure the 32in screen size is really big enough to make the benefits of Full HD apparent. 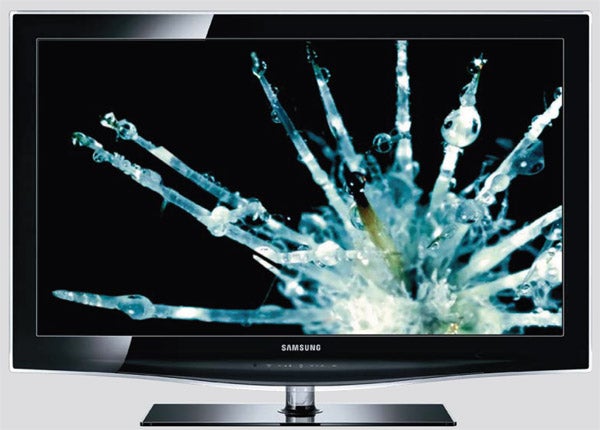 For me, the ace in the 32B650’s hand is its black level response. Somehow, Samsung has managed to produce some of the deepest, richest black tones on the 32B650 that I’ve seen on any small LCD TV without – and this is key – having to drastically reduce the image’s brightness. In other words, the set can give you blacks free of almost all of LCD’s usual grey mist effect within the same frame as bright whites and rich, vibrant colours. Outstanding.

Aside from the aforementioned dodgy presets and the care you need to take to keep 100Hz processing artefacts at bay, there’s only a couple of negative things I can say about the 32B650’s pictures. First, those lovely black levels drop off if you watch from an angle (but this is true of almost every other small LCD TV too) and second, standard definition pictures look a touch noisy. With the latter, the relative smallness of the screen actually helps because the noise is by no means as distracting as it can be on Samsung’s much larger TVs.

With Samsung continuing to set superb standards with its LCD pictures, it really is time they put a similar effort into their TVs’ audio. For as with so many other Samsung TVs, the 32B650’s speakers don’t have the power and range to sound truly convincing with any sort of action movie soundtrack.

To be fair, the set’s smallness means there isn’t such a pronounced discrepancy between the size of the visuals and the ‘size’ of the soundstage, but things still sound harsh and thin too often for comfort.

Although I can’t help but wish that Samsung would take a leaf out of, say, Philips’ book when it comes to the sound quality of its flat TVs, the LE32B650 is nonetheless a hugely desirable 32in TV. It looks beautiful, its pictures are outstanding, and its feature count is remarkably expansive – especially when you consider that you can get one for just over £600.