Back in August, we checked out Samsung’s 40in LE40B550 and found ourselves really quite amazed by the performance level it delivered for the princely sum of £519. In fact, so amazed were we that we immediately put the wheels in motion to get our hands on the 32in version of the set, given the mass-market, first- and second-room appeal of the 32in size.


Today, the LE32B550 has duly arrived. And I might as well say right away that it’s every bit as remarkable as its bigger sibling, if not even a little more so when compared with the same-sized competition.


For starters, Samsung’s almost unfairly aggressive pricing policy on the B550 range continues, as I found the LE32B550 being sold – or should that be given away?! – for just £392.15. This would be a mighty fine price for any 32in TV, never mind one that ends up performing as strongly as this one. 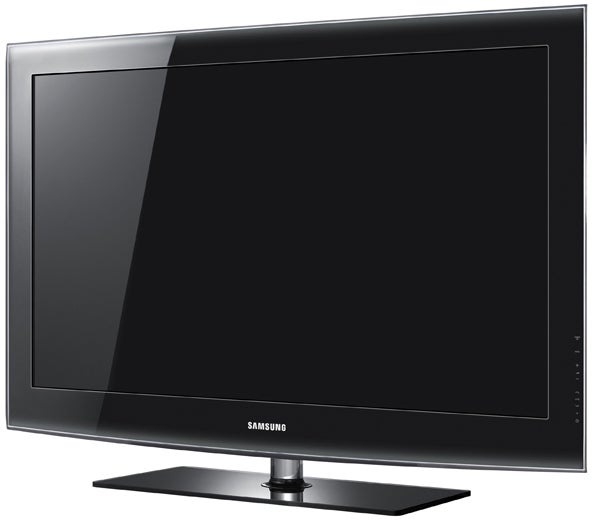 As with practically every other Samsung TV right now, meanwhile, the LE32B550 is a very appealing looker. The application of a glass-like see-through top sheet over the sheer black bezel adds a touch of real class, and makes the screen look and feel more luxurious in its build quality than it actually is.


The only unfortunate thing about the set aesthetically is the distance to which its rear end sticks out. The depth actually seems deeper than usual by 32in LCD TV standards, and thus stands in stark, chubby contrast to Samsung’s ultra-slim B7000 and B8000 edge LED range.


But then given how much cheaper the LE32B550 is than anything in Samsung’s LED range, I suspect that many people reading this review won’t find an extra couple of inches of rear-end depth too hard to live with.


Like its bodywork, the LE32B550’s key specifications don’t look like they have any right to belong to a sub-£400 32in TV. It’s a Full HD TV, for starters, and its connectivity is excellent, including four HDMIs, a PC port, and a USB jack that can play both JPEG photos and MP3 audio files.

For what it’s worth, we’d love to tell you here some absurdly high quoted contrast ratio figure for the TV as well. But in a rather odd move, Samsung has recently started just saying its TVs have ‘ultra’ or, in the LE32B550’s case, ‘High’ contrast. Honestly – it’s enough to make you think Samsung is starting to have about as much respect for contrast ratios as we do!


A set of really attractive, excellently legible onscreen menus, meanwhile, provide you with all manner of handy tweaks to help you calibrate images to suit your tastes and environment. 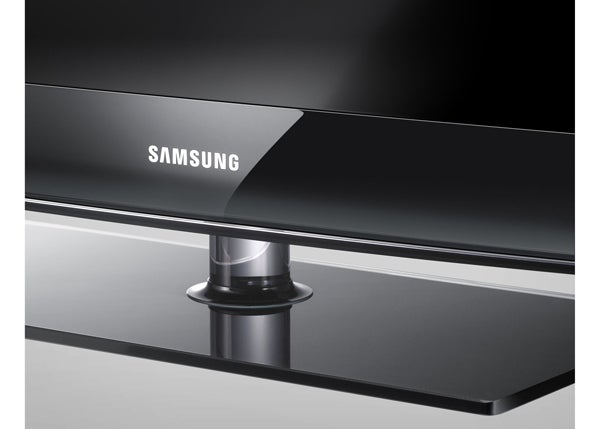 Among the best of the options available are a Black Tone adjustment, a multi-level dynamic contrast system, a multi-level black level booster, a colour space adjustment, a flesh tone tweaker, an edge enhancement circuit, and the facility to adjust the black level ‘starting point’ of the HDMI sockets. This latter feature has come in surprisingly handy on one or two recent TVs, enhancing greatly the black levels of some console games we’ve played, which otherwise looked rather flat and grey.


I’m duty-bound to report before going any further a couple of key features found higher up Samsung’s range that the LE32B550 doesn’t have. So: there’s no Ethernet port for extracting files from a PC or accessing Samsung’s Media 2.0 online service. And there’s no 100Hz system – all you’ve got picture processing-wise is Samsung’s general-purpose DNIe video engine.


While the absence of 100Hz and Ethernet connectivity certainly provide you with genuine reasons to consider stepping up to Samsung’s LE32B650 TV, their absence on the LE32B550 is entirely commensurate with its lowly price. 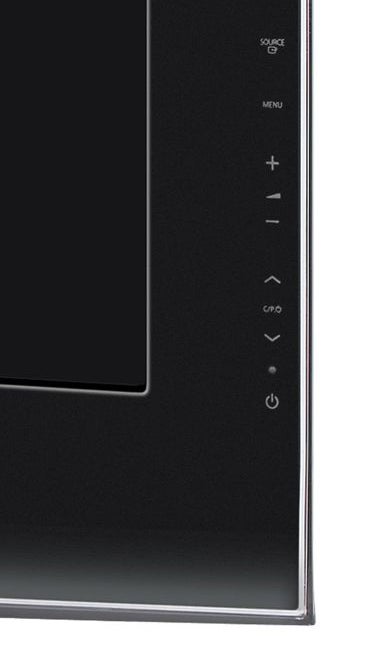 Switching the LE32B550 on reveals almost immediately that its pictures are every bit as striking as those we saw on the LE40B550. And when we say striking, that’s exactly what we mean.


For the dynamism on show is remarkable for any 32in TV, never mind such a cheap one. At one end of the spectrum, colours are extremely dynamic, rich, and fulsomely saturated, while peak whites are bright and crisp. Even more impressive, though, is the TV’s black level response. Dark scenes actually contain what looks like black – or at least, something as close to black as I’ve ever seen on a 32in LCD TV.


Even better, dark parts of otherwise bright pictures also look remarkably black, revealing an ability to render simultaneously bright and dark picture elements that almost defies science, given that this is a ‘normal’ LCD TV with a single CCFL backlight, rather than an LED model.


As you would expect, this sort of deep black level/rich colour combination works wonders on HD movies. But I was also startled by how much impact it had with simple Freeview tuner fare.

Now that I’ve mentioned Freeview, I might as well also mention the quality of the LE32B550’s standard definition scaling. Which follows other Samsung TVs of late in being really strikingly good, adding sharpness and detail without stressing noise; avoiding the old soft look that used to characterise Samsung’s standard def images; and keeping colours looking almost as natural and dynamic as they do with HD.


Despite its standard def prowess, though, it’s definitely with HD that the LE32B550 really shines, as the already mentioned dynamism of the picture is joined by some excellent sharpness and detailing, be it with Sky HD broadcasts or, especially, a selection of our favourite Blu-rays. 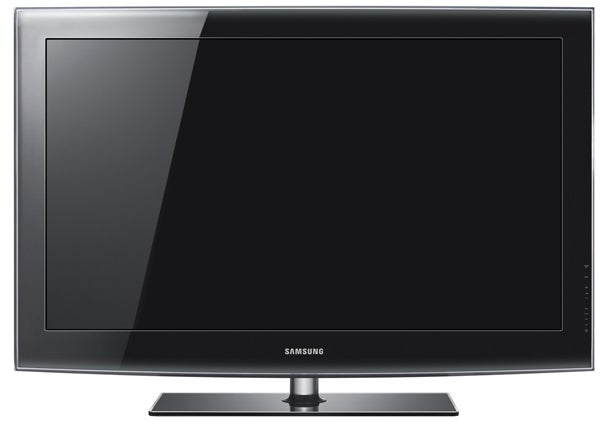 I’m relieved to be able to say as well that the image’s impeccable sharpness is surprisingly little affected by LCD’s motion blur problems, despite the lack of any 100Hz processing. What’s more, the general lack of motion blur or smearing holds good even when you’re watching standard definition.


It really is difficult to find any fault with the LE32B550’s pictures at all, given how cheap it is. The only things I can really come up with are that black levels reduce if you watch from an angle, and that you need to spend a little time calibrating the TV when you first get it. Though even here the effort you need to put in isn’t as extensive as it used to be with older Samsung TVs, thanks to the addition of a decently thought-through Natural mode.


The bad news with the LE32B550 is exclusively saved for its audio performance. For there’s no denying that the down-firing speakers tucked somewhere within the TV’s frame are pretty uninspiring. They deliver basic ‘chatty’ TV fine, but fail to open up much at all to handle the demands of action scenes, leaving them sounding rather flat and uninvolving.


Despite only having adequate audio, the Samsung LE32B550’s superb pictures are more than enough in themselves to justify the set’s amazingly low sub-£400 asking price. In fact, I’d even say the set goes beyond Toshiba’s 32AV635D in being the biggest bargain of the year so far.