Following last week’s Tocco Lite and the 8-megapixel camera toting i8910 from a month ago, I now have Samsung’s Jet S8000 in my hands.


Those two previously reviewed handsets represent the top of Samsung’s current line-up and its budget model. The Jet lies somewhere between the two and while it has a lot of good stuff going for it including a hand-friendly size and a super, bright, AMOLED screen, one of the things Samsung has decided to really shout about is the processor.


We’re quite used to seeing PDA style smartphones touting processor speeds, but smartphones that have stepped up from ordinary ‘mobile phone land’ don’t usually bother to push that particular facet of their make-up. However, Samsung reckons the 800MHz ‘application processor’ at the heart of the Jet is worthy of its own place in the phone’s specs list.


The point is that the processor should deliver jerk-free, seamless application running. Indeed, I found it quick to launch apps and generally responsive under the fingers, so thumbs up to that processor. Video fans may especially like the fact that video playback/recording is supported at 30fps and that MPEG4, H263, H.264, WMV, DivX and XviD files are supported. The nippy processor ensured jerk-free viewing too.


There is a lot more good stuff here, though. Nothing pushes boundaries beyond what I’ve seen before, but the overall package is quite compelling. 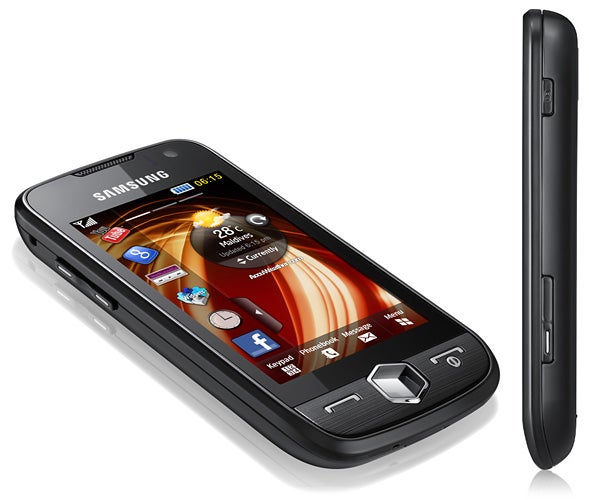 Physically this is a small and neat handset. Its black and silver livery is given that little something extra by a red piping to the backplate that varies in intensity depending on how the light catches it. It weighs a very acceptable 110g and measures just 108.9mm x 53.5mm x 11.9mm. In my book this makes it a great size for the hand and pocket, though, obviously, there isn’t room for one of those enormous screens that characterise many full touch-screened mobiles.


But the screen is big enough at 3.1in and its AMOLED technology ensures it is sharp and bright. Moreover, the 480 x 800 pixels on offer are packed tightly ensuring crispness is brought to proceedings.


Touch support is good too, with the screen responsive enough to my taps and sweeps to keep me happy despite being resistive rather than capacitive. Text entry, incidentally, uses a full QWERTY keyboard when the screen is in landscape mode – and the phone’s motions sensor ensures automatic flipping between landscape and portrait modes.


In portrait mode, a numberpad with predictive text is the best option on offer. There are a couple of different handwriting recognition modes in this screen orientation, too, and you use these by dragging a fingernail on screen to form words, but frankly you need to work too slowly for this method to be of any real use.

Of course the Jet supports Samsung’s Widgets system found across its range of touchscreened handsets. The convention remains unchanged. There are three main screens through which you fingerpan. Each can be filled with Widgets, drawn from a side bar that you pull out by tapping a tab on the left side of the screen.


Some Widgets take you to a website (e.g. social networking sites like Facebook or content sites like YouTube), others grab info over the air (e.g. AccuWeather gets a forecast), others provide on device controls (e.g. music playback or the handset’s Wi-Fi and Bluetooth), while others link you to on device apps (e.g. calendar). 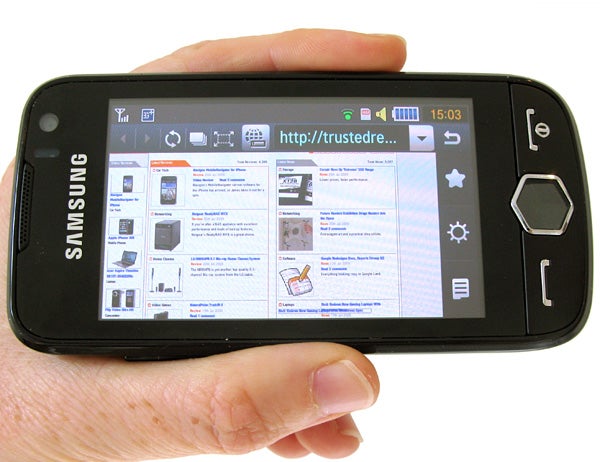 I often comment that the Widgets idea is great but some are too large for my liking, as I can’t cram enough of them onto a screen. That problem persists here, and I wish Samsung would think slightly laterally about how Widgets work.


Samsung has included a menu option too far on the Jet. Let me explain. We have the Widgets. Or, press the hexagonal button beneath the screen and we have the classic icon based menu stretched across three, finger-pannable screens. Or, press a button on the right side of the casing and you get, er, a cube. Rotate it with a finger through its six sides and you move between six multimedia features of the phone: FM radio, video player, games and more, Internet, music player and album. Choose one and you might get a carousel of further options or a link right into the main application on offer. It is entirely redundant given the other two menu options. 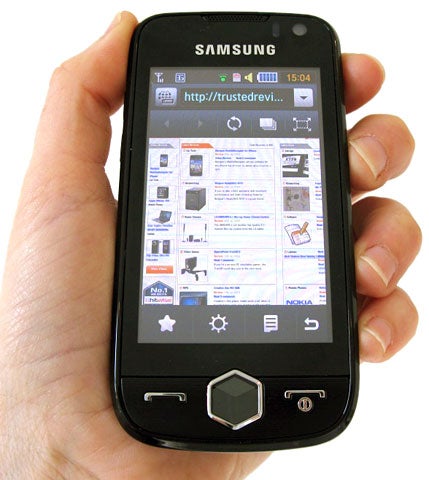 The web browser, Samsung’s own Dolphin browser, is pretty good. It is easy to go full screen by tapping an icon, finger-panning was responsive and a neat one-finger zooming feature works really well. You hold a finger on screen until the zoom icon appears then push upwards to zoom in, downwards to zoom out. The same system works when viewing photos. Pinch to zoom eat your heart out.


There is a GPS antenna and the handset is 3G with HSDPA. The HSDPA only runs to 3.6mbps, though, so if you’re in a coverage area for higher, you may find this disappointing. And another irritation is that while the Jet supports TV-Out there is no cable in the box.


One interesting plus point is the Jet’s support for Microsoft Exchange ActiveSync. This means anyone more used to a traditional PDA type smartphone could conceivably think of switching to this altogether trendier option to sync their emails, calendar and contacts with an Exchange server.

And so to music. The Jet has a good music player that supports MP3, AAC, AAC+, WMA, and WMV formats. There is also a competent set of headphones in the box. They are two-piece with a 3.5mm connector behind the microphone. And, joy of joys, there’s a 3.5mm ack on the handset itself. This jack is located on the phone’s top edge where pocket snagging options are minimised. A simple 10 out of 10 there Samsung.


The equaliser has a noticeable effect on playback quality – it is just a pity there isn’t scope to accommodate user-defined options. An FM radio rounds out the audio capabilities nicely and you can record from the radio, which is pleasing.


The camera shoots stills at resolutions to 5-megapixels. It has a dual LED flash and autofocus as well as face detection, smile shot, blink detection, geo tagging and a panorama shooting mode, but no dedicated macro mode. 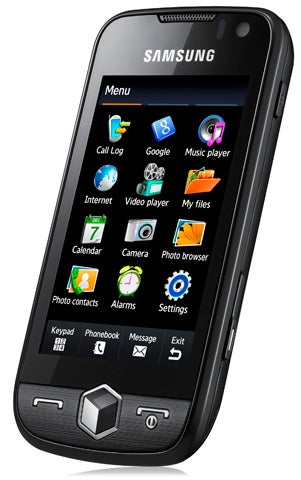 Photos are quite good, though colour reproduction isn’t always what it could be. The coloured dish photographed under household lighting is passable but I’ve seen better. Ditto the white chair which is fairly crisp but its whiteness is not uniform. The flowers ought to be a deeper purple, but the detailing is good.


Memory runs to 2GB internally, and you can bump this up with microSD cards, the slot being easily accessible under the battery cover.


Unfortunately, time constraints meant I could not do my usual battery life rundown test. However, anecdotally I got about four hours of music out of the phone plus a day’s reasonably rigorous use and still had half the battery life left.


The Samsung Jet is a super phone. It offers a good range of features and a nice hardware design that feels comfortable in the hand. Its processor does itself justice too. If you are considering last week’s Tocco Lite, glance here for an alternative and better option. 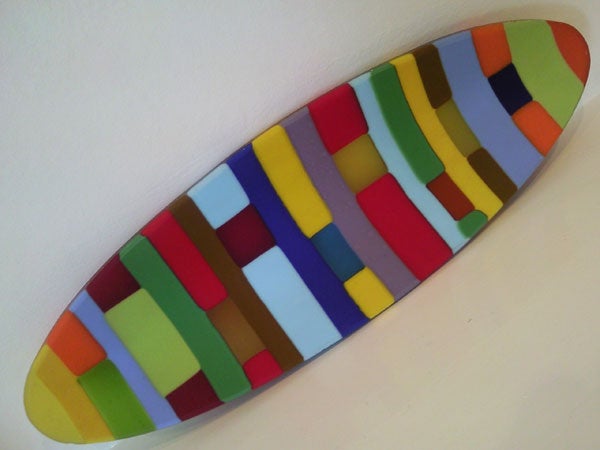 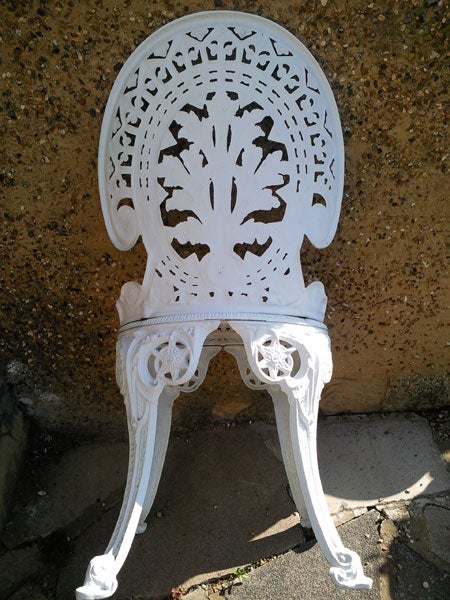 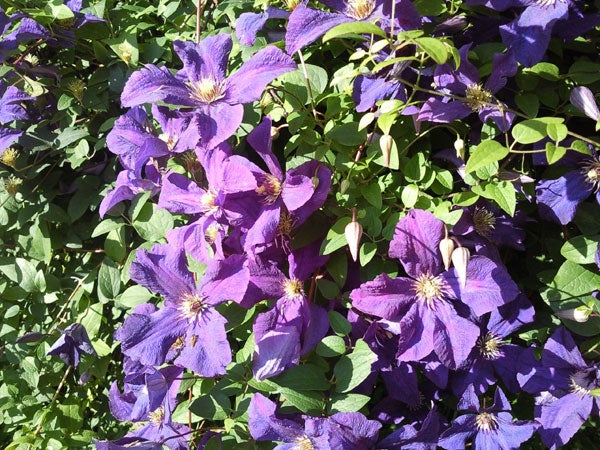