Windows Mobile Smartphones are pretty widely available these days, both from operators and SIM free. But Windows Mobile Smartphones with hard drives in them are another matter. Until recently there weren’t any at all but now there are, though admittedly you can only choose from a range of one. This is the Samsung’s i300. It’s available only from O2 and will cost you £50 on one of its pay monthly contracts. And it has a drive capacity of 3GB.


The hardware is a mix of black and silver colouring, and the left and right edges are peppered with slots and buttons. Given that there are plenty of other Windows Mobile Smartphones around, not surprisingly it’s the hard drive that’s the main selling point of this handset and judging from O2’s web site the emphasis is very much on using the space it provides to store music files.

It is odd that O2 wants to position the i300 as so squarely consumer. Imagine what you can do as a professional user with 3GB of storage space. If you want to buy 3GB of key drive storage it’s going to cost you a whole lot more than £49.99. It could well be that if you need to shift a lot of data you could justify moving to the i300 on the price per MB alone, without taking into consideration its smartphone features.


To give the music idea its due, it is incredibly easy to get tunes onto the i300. It runs Windows Media Player 10, and if you also run that on your PC you can set things up so that music synchronises. If you don’t have Windows Media Player 10 on your PC, or don’t want to do the synching thing, then copying music files and folders across manually is just as easy. 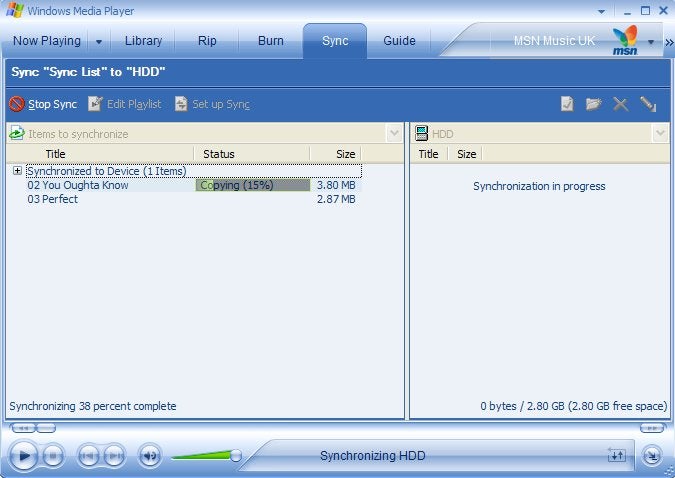 What the i300 is being billed as here is a competitor to both portable music players like the iPod nano and music phones like Sony Ericsson’s W800i, W550i and the new 3G W900i. It beats the Sony Ericssons hands down on storage capacity, but doesn’t outperform either on sound quality. Through the i300’s built-in twin speakers, it’s mediocre at best. It’s better through the provided headset, but still not outstanding, though things are improved by using your own headphones.

Samsung includes its own media player that can pick up tracks you’ve synchronised via Windows Media Player 10 or copied across manually. It sports an equaliser so you can tweak the audio to your tastes.


Of course the reason for the far larger capacity is that the i300 is a hard drive based handset, whereas Sony Ericsson’s Walkmans and Apple’s nano use flash memory. At first, it is a bit disconcerting to the ‘tickticktick’ sound of the spinning hard drive emanating from the handset and I did worry about the hard drive inside the phone being robust enough to survive the falls and knocks that a handset has to take during its everyday life.


Though you might think that 3GB was enough capacity for a hard disk, the Samsung i300 actually supports removable media as well. There’s a TransFlash (aka MicroSD) slot on the right edge of the casing. A 512MB card will set you back less than £40 at www.valuemedia.co.uk


The phone sports the usual array of Windows Mobile applications, such as a phonebook, calendar, to do list manager and calculator as well as the already noted Windows Media Player. ActiveSync enables the i300 to synchronise with Outlook on your PC. There’s email, SMS and MMS support, and via Pocket Internet Explorer you can hop onto the Web if you are keen to see what sites look like on the 240 x 320 pixel, 262 thousand colour screen.


You also get voice control, which enables you to launch software applications as well as initiate calls, a unit conversion utility, and a collection of stopwatch and alarm tools. There is also an icon driven application launcher, in case you prefer this way of getting into applications. 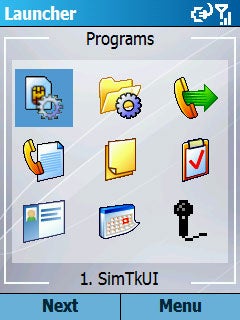 Also squirreled away on the system is the Picsel viewer for reading Word, PowerPoint, PDF, Excel, plain text and other document. I think this viewer is a great achievement, and was very impressed with how well it worked. For example, it readily coped with an 800k PowerPoint document, opening it from a TransFlash memory card more quickly than I’d expected. But the sad fact is that i300’s 30mm wide x 40mm tall screen is simply too small for adequately reading formatted documents like PDFs or PowerPoints, or spreadsheets that are more than about 3 cells wide, even though you can switch the screen into a landscape orientation to make the most of it.

There’s a built-in camera, the lens of which sits on the back of the casing along with a flash unit. It’s capable of shooting stills at resolutions as high as 1280 x 1024, down through 640 x 480, 320 x 240 and 176 x 144. t’ll shoot video too. You can apply sepia, black and white and negative filters to stills, choose between a range of pre set white balance configurations and can make composite shots by identifying 2 x 2 or 3 x 3 grids and shooting in sections as well as shooting sequences of 6 or 9 images as bursts. The camera activation button runs down the right edge while another drops you into the profile chooser and with a long press activates or deactivates the GSM radio (Flight-mode), and another button that locks the keys.


On the left edge is the headphone slot, a button that on a short press activates the voice recorder and when held down launches the voice control software. There’s also a button that starts the Samsung Media Player, and a volume rocker.


The front of the casing sports the usual array of number keys, call and end, home and back and soft menu keys. 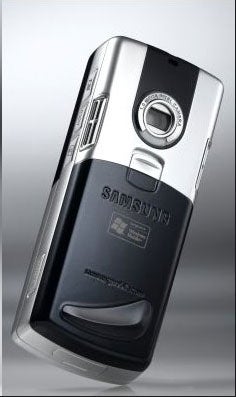 The most impressive hardware element of all is the navigation button. This sits on the front of the casing beneath the screen as usual, and has the standard left, right, up and down functions, and there is a central select button as usual too.


What’s clever is the ridge on the button, used to rotate it. This has multiple uses. One function is to activate the camera’s digital zoom and you can also use it to change volume when playing music. When looking at a list of the i300’s applications you can scroll through them by rotating this button, and when using the Picsel viewer you swivel the button to zoom into whatever it is you are reading. When you are on the Today screen it can be used to navigate a bar that can variously show you new messages, missed calls, upcoming appointments, and the software that’s been used most recently.


Chunky is the word that springs to mind as a description for the hardware. It weighs in at 121g and measures 113 x 48 x 20mm. This doesn’t make it oversized for a mobile phone, but it is on the large side. Samsung supplies two batteries, one of which is larger than the other. With the larger one in place the 20mm figure above rises to 25mm, and weight tops 148g.

The plus side is an increase in battery life. My standard rundown test for smartphones, constant playback of music while the screen is forced to stay on, produced just shy of nine hours of life on the ‘fat’ battery and just over five hours on the ‘thin’ one.


In both cases, though, I lost access to the hard drive long before then – a shade over seven hours of playback and a shade under four hours respectively. I was playing from a TransFlash card for the test, and had I been accessing the hard drive overall battery life would have been a bit shorter.


The i300 comes with a rather ungainly docking cradle that can charge the spare battery at the same time as the handset itself. You also get a direct cable connection for synchronising and a separate mains adaptor as well as a two-piece headset – you can use your own favourites but the i300 end connector is proprietary, and a wrist lanyard.


For all its chunkiness, and my own scepticism about the durability of the mechanical hard drive I can’t help liking the i300 a lot. It doesn’t do a huge amount that’s different from any other Windows Mobile Smartphone apart from offer 3GB of built in storage, but I can see how that could be a real boon to large numbers of people who currently carry a USB key drive and a phone.


The main party trick of the Samsung i300 is its 3GB hard disk, which makes it far more viable for music and video content. The downside is that it’s slightly bulkier than other Windows Mobile Smartphones but for many the benefit of the extra capacity means that this will be a price worth paying.