Samsung’s second-tier soundbar in its 2020 lineup delivers an excellent performance. For those not interested – or who don’t have the space for – rear speakers, the HW-Q900T is a good compromise, and its versatile performance means it works well with a range of content.

The Samsung HW-Q900T is the Korean company’s step down soundbar from the HW-Q950T, retaining the same design but dropping the rear speakers.

Like the Q950T, the Q900T supports Dolby Atmos and DTS:X immersive sound – but in dropping the rear speakers, it settles for a slightly more sedate 7.1.2 configuration.

For that spec the Q900T is certainly less hard-hitting on the wallet, although without the rear speakers the Q900T loses some of the Q950T’s immersiveness. Nevertheless, it’s still a fantastic sounding bar.

As such, it still takes up a sizable amount of space and requires 7cm of clearance to sit under a TV. Wall-mounting is supported, with the necessary brackets included in the package. To operate at its best you’ll need to clear space out towards the edges to ensure the wide-firing speakers aren’t obstructed. That it doesn’t come with rear speakers makes the HW-Q900T more suited to smaller rooms. 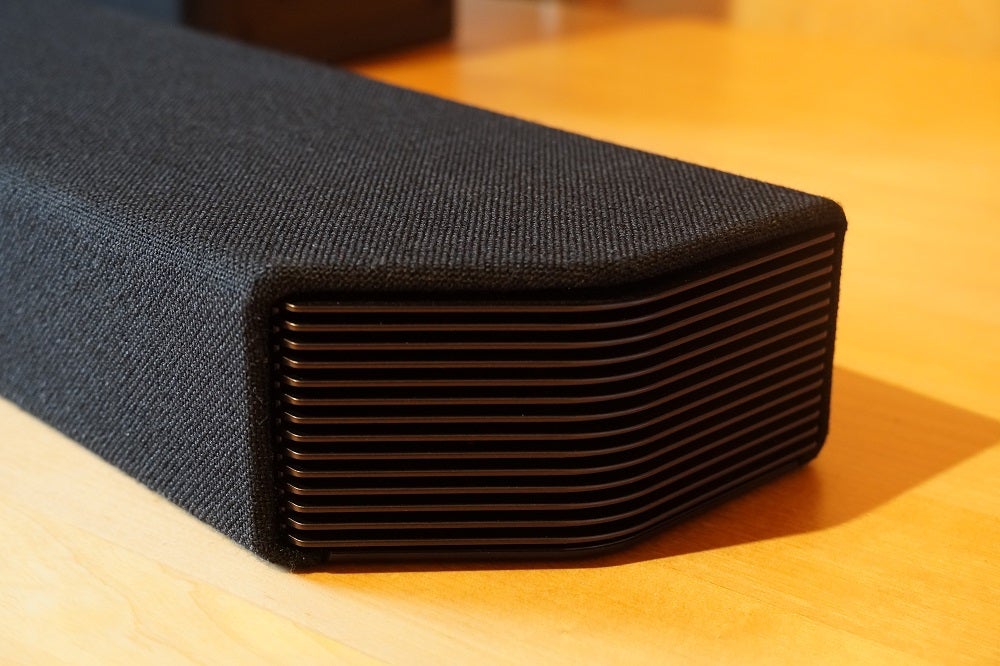 However, it being similar to the Q950T means that the odd design decisions Samsung made with its premium bar are carried over. The Q900T has two displays, neither of which is ultimately convenient. The front-facing display shows power and volume, while the more conventional display on top reveals input and audio. To make sure the HW-Q900T is pumping out the right audio track or to tweak the speaker levels, you’ll have to leave the comfort of your sofa. It’s a curious decision.

On the unit you’ll find a multi-function button (input/power/Alexa), volume controls and a mic on/off button for privacy. You can perform most of these functions (and more) via the remote, which is one of the nicer ones to use. A settings button dives into the menu for changing speaker levels, as well as fiddling with bass and treble to better fit the confines of your room. Although, again, to see those levels you’ll need to journey away from your seat and (likely) glower at the display while edits are made. 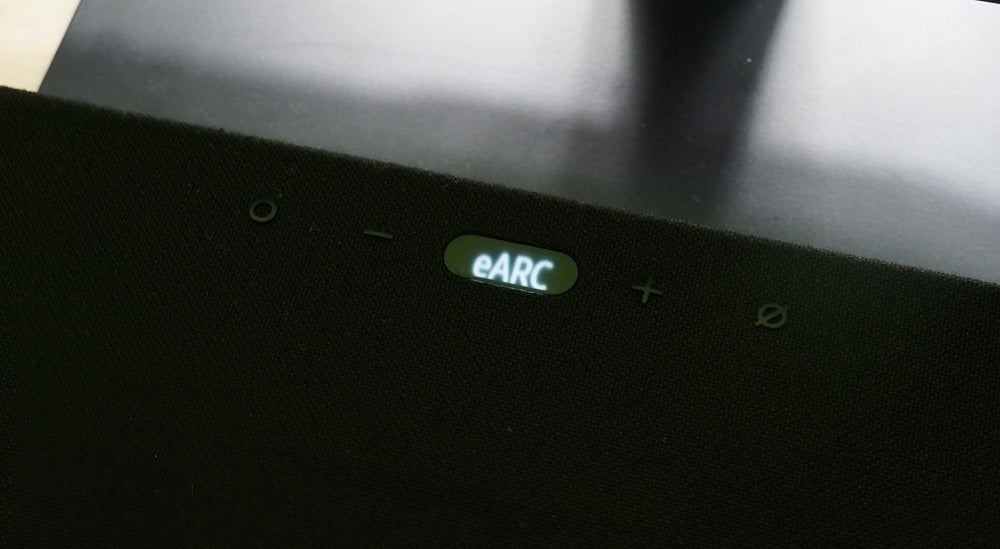 The Samsung HW-Q900T can be set up in the SmartThings app. In it you’ll find access to EQ settings and woofer levels, although these aren’t as comprehensive as what you can do with the remote. If you have other smart devices and appliances in the home, SmartThings can integrate them (Philips Hue, Ring, and so on) for operation within the app. The bar doesn’t support any room equalisation technology in the manner of Sonos’ Trueplay, though.

Total amplification is 406W, more than Samsung’s next soundbar down in the HW-Q800T (330W). The main bar somehow fits in a ridiculous number of speakers that includes two up-firing full-range drivers, full-range side-firing speakers, a wide-range tweeter and dedicated centre. As far as Samsung is concerned, the more speakers there are, the better.

Connections allow for plugging in multiple sources with two HDMI inputs (more than the HW-Q800T’s sole input). The HDMI output supports eARC (for Atmos and the like), while the soundbar can pass through 4K HDR10+ signals. A single optical input is all there is in terms of physical connections, skipping the USB port required for service updates. You’ll find them in the recessed area on the speaker’s underside. 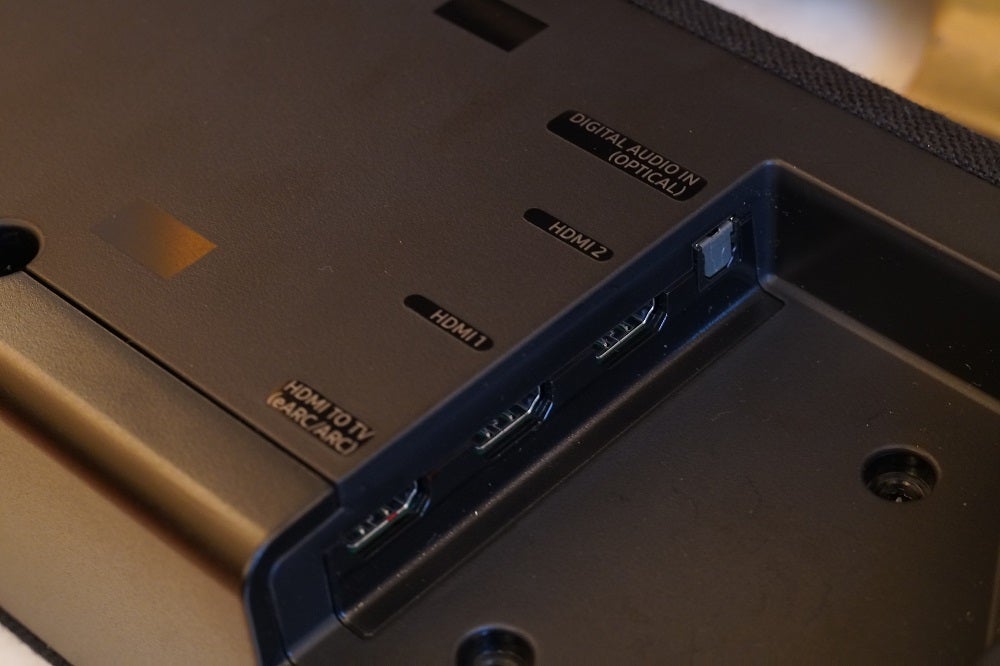 Other features include Wi-Fi, Bluetooth (SBC codec), built-in Alexa and Spotify Connect integration. If you have a Samsung Galaxy smartphone, just tap it on the main bar and audio can be sent straight to the soundbar, negating the need for manual pairing.

Sound modes include Standard, Surround, Game Pro and Adaptive Sound. Surround provides a wider field of sound than Standard, while Adaptive Sound analyses audio in real time and optimises depending on the content. New for 2020 is Q-Symphony, but you’ll need a compatible Q-Series and a QLED TV that supports OTS (Object Tracking Sound) to sample it. It synchronises audio from both the TV and soundbar for a bigger sound that can track objects as they move across the screen with greater accuracy. 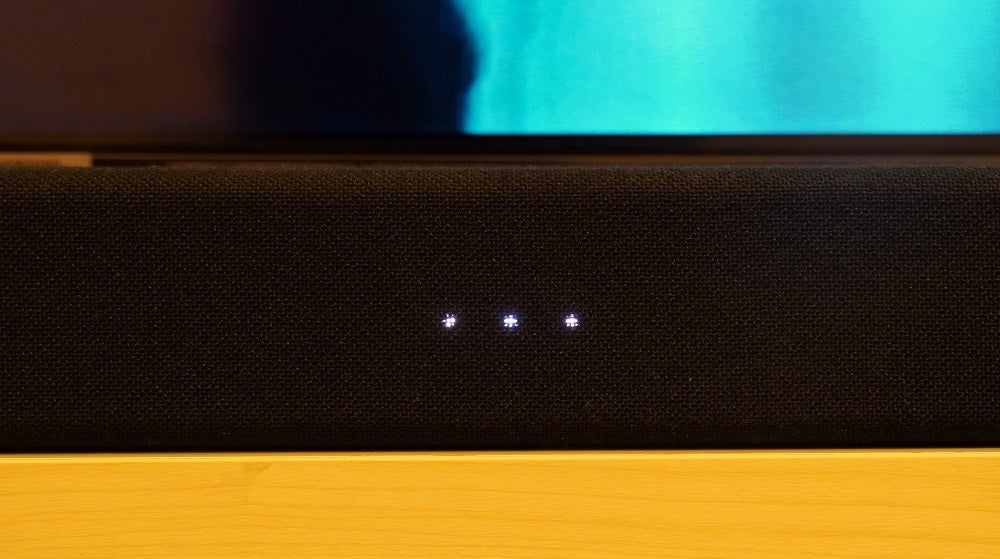 Losing the rear height channels handicaps the overall performance of the HW-Q900T in obvious ways, but it’s still a fabulous sounding experience.

The size and weight of its sound remains impressive. The opening of Blade Runner (Atmos) is a showcase for thunderous bass integration, with the main bar firing sounds into the room with impact. Spinners fly towards you, the only difference being that they don’t “pass” by as they would with rear speakers. Still, what you get is impressive enough. 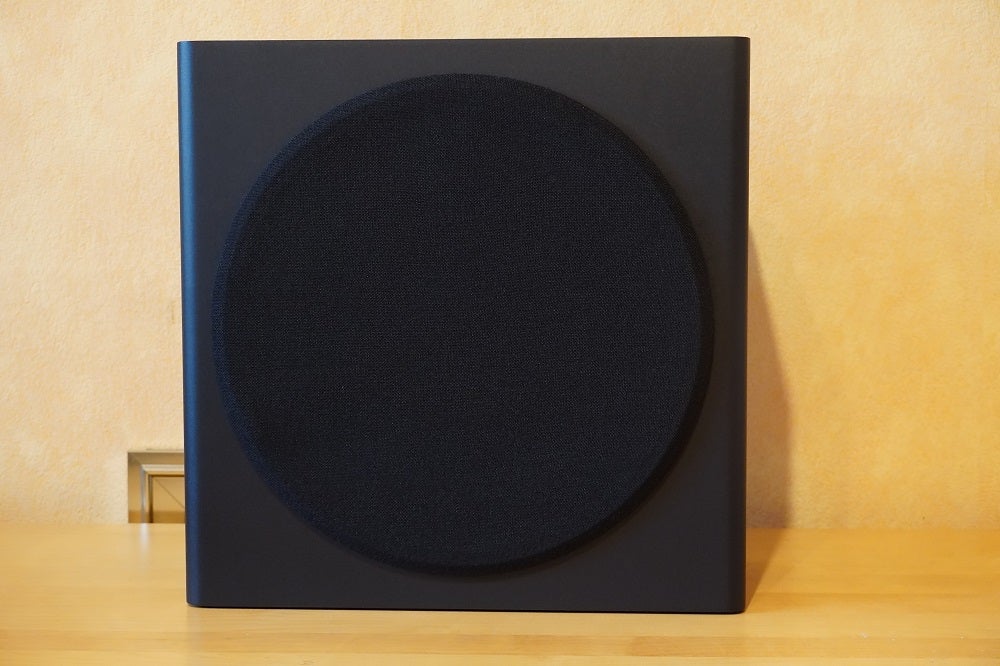 Height effects are handled with nuance, as shown with American Gangster (DTS:X); expanding both the width and height of scenes. When Denzel Washington’s Frank Lucas arrives in Bangkok, there’s a tangible feel of the hustle and bustle of a busy street market lingering in the space in front of the viewer.

The feeling of a train passing over during a stakeout in the same film adds to the soundbar’s deftness in creating an effective soundstage, while you can hear Anakin’s “war cry” from above as he tries (and fails) to gain the higher ground over Obi-Wan in Revenge of The Sith (Atmos).

The dedicated channel aids crystal-clear delivery of dialogue, with voices elevated to match their position on-screen. Overall clarity is excellent, with American Gangster’s score, dialogue and effects clearly separated for a layered mix, while tonally the speaker is impressively natural in its delivery.

Q-Symphony – if you have the required equipment – works effectively. Watching Parasite (5.1) on Prime Video, off-screen dialogue is ushered out towards the side to create scenes that “feel” bigger, while vehicles can be tracked off-screen and followed as they pan across and through a scene. Give it the right content and Q-Symphony is very effective indeed. 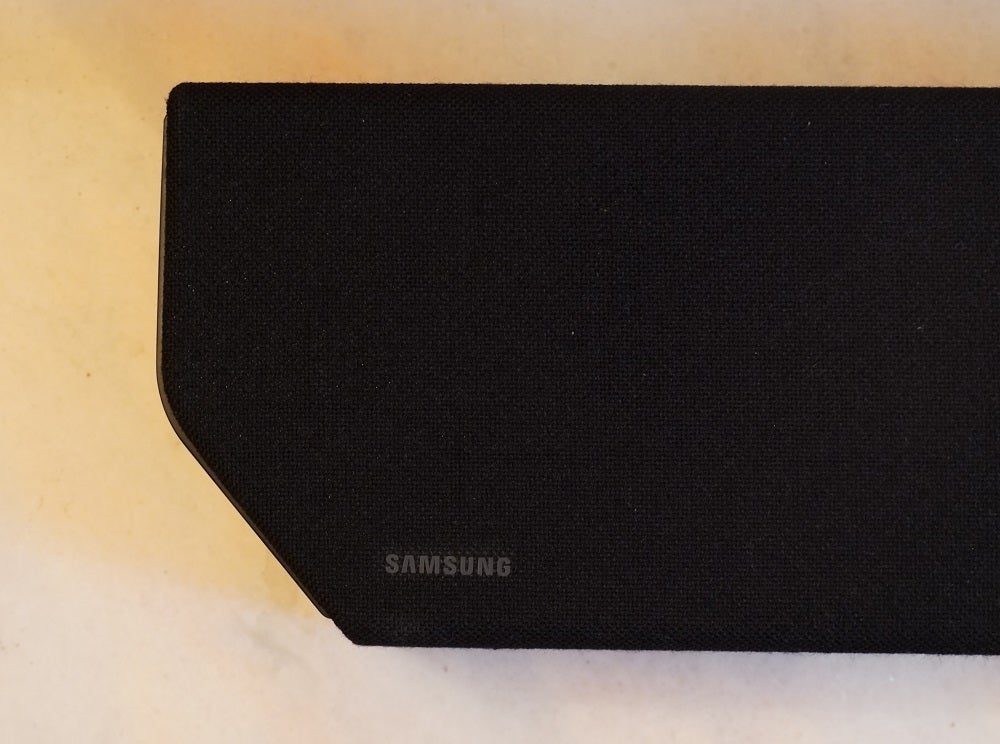 There’s plenty of detail for the HW-Q900T to feed on in The Americans (5.1, Prime Video). While this soundbar can summon much power, there’s also nuance on the table, with quiet scenes handled in a manner that makes tense scenes even more so.

Musically, it impresses as well. La La Land’s Another Day of Sun (Atmos) sounds excellent, with lots of clarity given to voices. The Samsung delivers a big, energetic and entertaining sound that livens up the scene, and also comes across as distinctly musical in its presentation. Much like the premium bar in the 2020 range, the Samsung HW-Q900T is a winning crowd pleaser.

Should you buy the Samsung HW-Q950T?

Like the HW-Q950T, the HW-Q900T is a wonderfully articulate performer with a range of content. It loses the sense of immersiveness that the premium option in Samsung’s 2020 Q-series soundbar range delivers, but its front-heavy delivery will likely work better in smaller rooms where it’s harder to squeeze in rear speakers.

For a similar price, Sony’s HT-ST5000 remains an option. It produces its 7.1.2-channel performance through the aid of up-firing speakers and processing, features support for DTS:X and Atmos, and also carries more HDMI inputs. Considering it’s been on the market since 2017, we suspect there may be a successor on its way sooner rather than later.

There’s also Samsung’s own HW-Q800T. Features are similar, although there’s one less HDMI input and fewer channels (3.1.2). The caveat is that it is £400 cheaper.