You'll struggle to find a soundbar as powerful, but you might find yourself wishing that some rear speakers were thrown in for that price, too

The Samsung HW-N850 is the second-most expensive soundbar from the Korean brand’s 2018 range.

Designed in conjunction with renowned audio brand Harman Kardon, it lacks the rear speakers that come with the flagship Samsung HW-N950, but still delivers eight discrete channels of sound. That’s seven from its large main soundbar section, and one from its included wireless subwoofer. It can also decode both Dolby Atmos and DTS-X object-based sound formats.

It isn’t cheap at £999 – but at least that gets you the most powerful two-piece home theatre sound system in town.

The N850 comes in two parts: the soundbar designed to sit beneath your TV screen, and a wireless subwoofer.

The main soundbar is a brute. And I don’t mean that in a bad way. Its large – 83 x 1226 x 136 (hwd) mm – and heavy; outstandingly well built. These are all factors that point towards an uncompromising sound performance.

There is a downside to its hefty proportions, however. If setting it on the the same bit of furniture as your  TV then it may block your view. Think about last year’s Philips 65OLED803, for instance, which sits low on its pair of ultra-skinny feet.

In fact, it only just fits beneath Samsung’s own 2018 TV range. So much so that while it doesn’t quite jut into the picture, it can impede signals from the TV’s IR remote control.

Despite its substantial weight, the N850 can be fixed beneath a wall-hanging TV. This way, there’s no chance of it jutting into the picture, provided you aren’t sat far below the screen. Bear in mind, though, that when hung up the N850 sticks out from your wall, to the degree where it ends up resembling a particularly chunky shelf. Albeit a shelf that we’d strongly advise against placing ornaments on…

Despite its size, the N850’s soundbar isn’t unattractive. Its metallic, grilled finish is elegantly imposing, while rounded corners stop it from looking harsh.

Tucked slightly awkwardly on the soundbar’s right side is a small but bright, easy to read LED. This notifies the source you have selected, and helps you to adjust the relative volume of all the built-in channels. 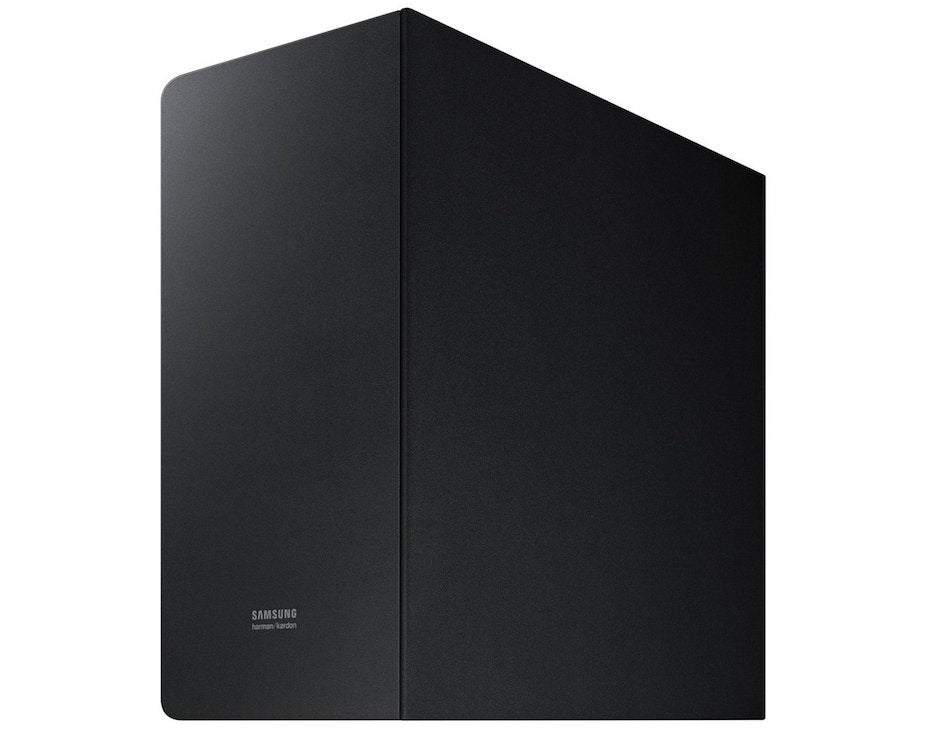 The subwoofer isn’t quite as well built as the main soundbar, but it’s still bigger and heavier than most subwoofers you get with two-piece soundbars. It’s good to find a strong brace bar running down over the side-firing woofer, too. This makes the woofer much less likely to get wiped out by an accidentally invading foot.

The N850 is controlled by a very slick and effective remote. Its slender, metallic form feels great to hold, and all the features you need are intuitively accessed via just a handful of buttons. My only complaint is that you sometimes accidentally press the volume rocker switch in (for ‘mute’) when you meant to push it up.

The N850’s main attractions are its power and speaker channel support of 372W and 5.1.2 channels respectively. Those channels are “real”, too, by which I mean that they have actual physical drivers (in the shape of 13 speakers), rather than using processing to create “virtual” channels.

The power and channel count go well beyond those of the vast majority of other two-piece soundbar solutions. Which should mean that unless something goes horribly wrong, the N850 is better equipped than any rival to do justice to those Dolby Atmos and DTS:X tracks it can decode. This support for DTS:X is a handy advance on the N850’s predecessor, the K850. 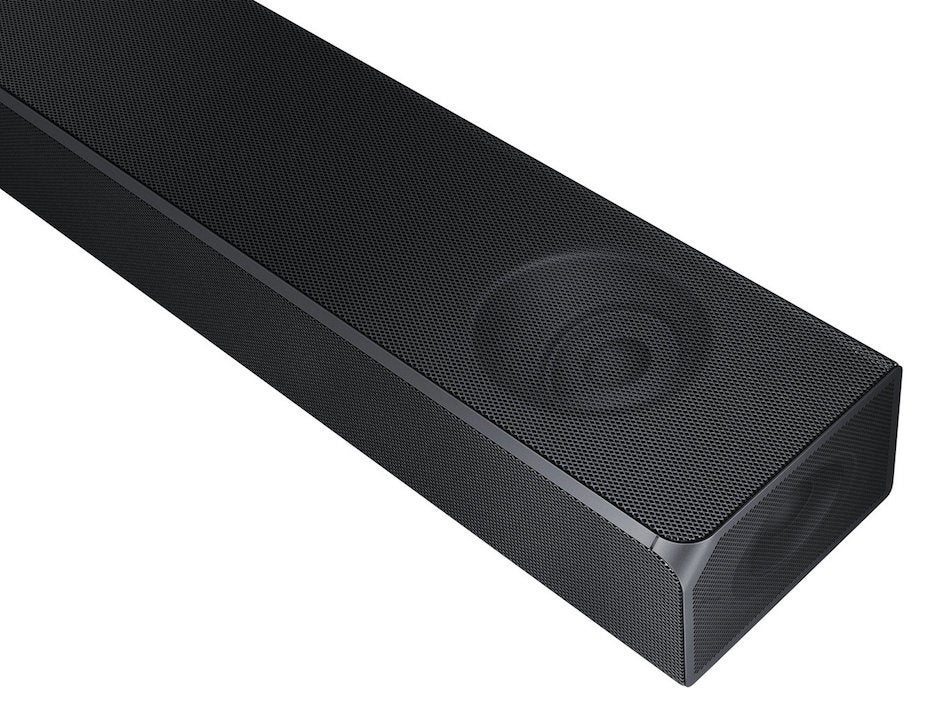 At the time of review, the N850 only supports standard ARC (audio return channel) audio from TV ARC outputs, which means it can only take compressed Dolby Digital Plus Dolby Atmos feeds from your TV. However, Samsung tells me that it’s working on an eARC update for the soundbar that will enable transport of uncompressed “TrueHD” Dolby Atmos soundtracks from compatible TVs. But there’s no date yet on when this update might be rolled out.

In many ways, the N850’s speaker configuration matches that of the K850. You get nine front-facing speakers/tweeters along the front edge, and two upfiring drivers on the top edge. These top drivers are angled forward slightly, so they can bounce their sound from the ceiling above you to deliver the Dolby Atmos/DTS:X height effects.

However, where the N850 critically differs from its predecessor is in its provision of angled-forward drivers in each of the soundbar’s ends. These new channels are designed to fill in the sides of the Dolby Atmos/DTS:X 3D audio “bubble”.

In its out-of-box state, though, the N850 can’t fully complete that audio bubble since it doesn’t ship with any rear speakers. You can get an optional extra wireless rear package, the SWA-9000S, for £229. However, the SWA-9000S’s don’t include any up-firing drivers to complete the Atmos/DTS:X “bubble” effect. 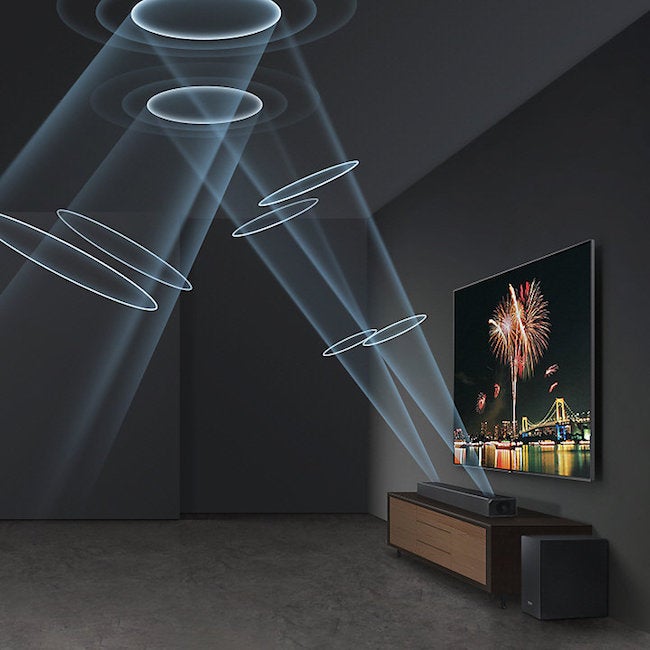 The N850’s connectivity is impressive. For starters, there are two HDMI inputs and an HDMI output. This HDMI loop-through system supports Full HDR 4K loop-through, too. In fact, it even supports Dolby Vision HDR pass-through to compatible TVs, despite the aversion to Dolby Vision of Samsung’s own TV division.

There’s also an optical digital audio input, plus both Wi-Fi and Bluetooth wireless audio networking for streaming music from the internet or your smart devices.

The N850’s UHQ Sound feature, meanwhile, can upscale 16-bit CD and 24-bit Hi-Res music files to 32 bits for extra dynamic range. Finally, it uses specially designed wide-range tweeters to deliver an unusually wide sweet spot. As such, you won’t have to cram your family into one part of your living room to enjoy its benefits.

Physical setup of the N850 couldn’t be easier (unless you’re wall-hanging it). Just pop the soundbar on the table beneath your screen and the subwoofer pretty much anywhere you like – so long as the bass driver side is facing into the room.

The soundbar and subwoofer should automatically connect to each other when you first switch them on. You can check this has happened by looking for a steady blue light on the subwoofer’s rear.

Other than that, all that’s left to do is tweak the relative volumes of each speaker channel to deliver the best balance for your room. 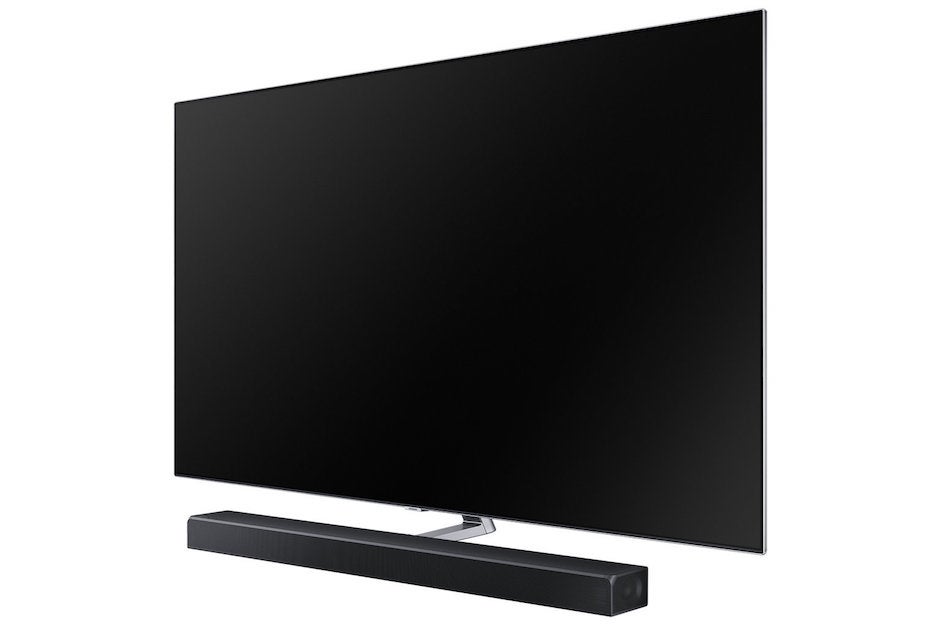 As I’d hoped given the performance of its K850 predecessor and its formidable build quality, the N850 is blisteringly powerful.

Film soundtracks – Atmos, DTS:X or just plain-old 5.1 – erupt from both the soundbar and the subwoofer with real venom, delivering enough volume to fill the largest of rooms.

It isn’t just volume for volume’s sake, though. It feeds into a dynamic range that stretches far beyond the capabilities of pretty much every rival. Bass plummets to extreme depths that seem like they should be coming from a much larger subwoofer. The mid-range is expansive, reaching low enough to blend effortlessly into the subwoofer’s bass, while also hitting the most shrill of details without sounding thin or harsh.

Between those extremes the mid-range also delivers the ebb and flow of even the most extreme of action movie soundtracks with both enthusiasm and guile, all the while presenting voices with exceptional clarity and presence.

The scale of the sound stage is pretty epic. Those dedicated top-channel speakers project well enough to generate a genuine sense of audio effects coming from above you during Dolby Atmos and DTS:X mixes, while the new end-speakers create welcome left and right sides to the sound stage that weren’t present with the K850.

However, despite the height and width of the sound stage, even the most far-flung effects don’t feel detached from the heart of the action being delivered by the main front left, centre and right drivers. Not least because these main drivers create a remarkably large 3D audio space with Dolby Atmos and DTS:X formats.

All the drivers can handle high volumes and loads without succumbing to distortion or butting up against each other, and there’s no sense of boxiness or flatness to any part of the sound.

There are just two limitations to the N850’s fearsome audio performance. First, it tends to sound a touch aggressive with music. Harman Kardon’s influence has added some musical refinement to compared with the K850, but the N850 is still more comfortable with “Ride Of The Valkyries” and Metallica than chamber music and Antony and The Johnsons.

Second, it can feel a little odd not to have any rear speakers rounding out the N850’s potent front, side and overhead performance. The new side speakers provide a fuller sound space than the K850 could manage. But ironically, by doing such a great job of creating a front “hemisphere” of sound, the N850 sometimes really made me miss the rear hemisphere. 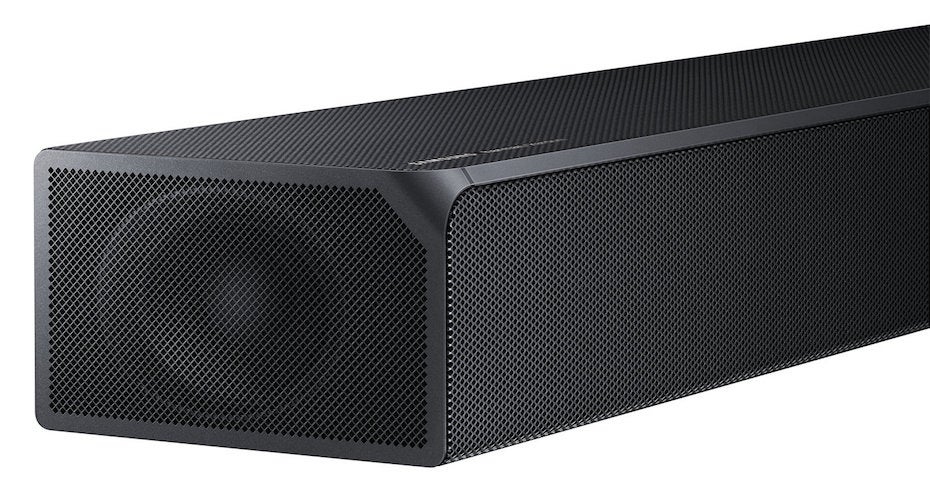 As noted earlier, you can add Samsung’s SWA-9000S optional rear speakers, but these won’t also give you up-firing drivers.

It’s important to say, too, that the number of drivers the N850 uses means you need to be pretty careful about where it’s placed to get the best from it. For instance, a flat ceiling is preferable to a vaulted or heavily beamed one. And both the side speakers really need some sort of wall to bounce off.

Provided you can meet those conditions, though, the N850 does actually live up to its promise of delivering an impressively accommodating, family-friendly sweet spot. I should stress, too, that really the only reason I sometimes found myself wanting even more from the N850 was that what you already get sounds so good.

This is a tricky one. On the upside, if you want the most powerful, dynamic and room-filling Dolby Atmos and DTS:X soundbar/subwoofer combination, the N850 is it.

All that power and all those speaker channels don’t come cheap, however. At £999, the N850 is at least twice as expensive as many rivals – although, admittedly, far less potent than Atmos-capable soundbars.

That said, given that stepping up to the stunning Samsung N950 package (which adds the brand’s brilliant up-firing rear speakers) costs an extra £500, I can imagine many audio fans deciding that the N850’s uniquely powerful two-speaker solution is a more than respectable compromise.

The HW-N850 is hands down the most powerful and all-round effective two-part soundbar I’ve heard to date. However, it’s also one of the most expensive, raising the question of whether you might be better going the whole hog and stumping up more for Samsung’s full surround system, the outstanding HW-N950.

You’ll struggle to find a soundbar as powerful, but you might find yourself wishing that some rear speakers were thrown in for that price, too.