The Samsung HW-N400 is an entry-level soundbar and the latest member of the company’s ‘all-in-one’ range, which means there’s no separate subwoofer. Instead, the N400 uses a smaller cabinet that’s specifically designed for less-imposing screen sizes.

The feature set is reasonable and includes HDMI inputs and outputs, along with support for Bluetooth. However, the HDMI connections are limited to version 1.4 and, combined with the lack of a subwoofer, this puts the N400 at a disadvantage against rivals – especially at £299. 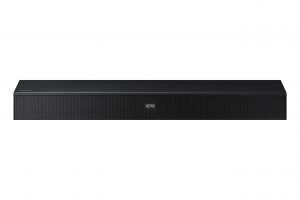 The Samsung HW-N400 uses a very similar design to Samsung’s other soundbars, and is based around a simple rectangular block with a black finish. The build quality is fairly decent, and the soundbar has a bit of weight to it, which always adds confidence.

At the front of the soundbar you’ll find a metal grille, and along the top it’s finished in a brushed metal; the sides are just plastic, however. On the right-hand side there are some basic controls that allow you to select inputs, adjust the volume and turn the soundbar on and off. 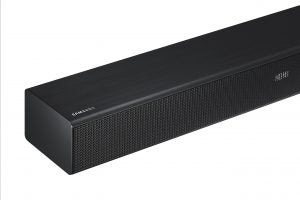 An LED display is located at the front and centre of the N400, which provides basic information. So when the soundbar receives a command, the display lights up, providing feedback on the selected inputs, various settings and the volume.

The N400 is 64cm wide, making it ideal for smaller-sized TVs; and at 7.1cm high, it shouldn’t block the screen, even when placed in front of it. Thanks to its diminutive cabinet, the N400 will also fit easily onto a shelf under the TV. If you’d rather wall-mount the soundbar, Samsung conveniently includes dedicated brackets for just such a purpose. 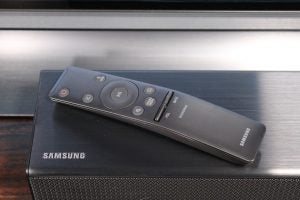 Unlike a lot of smaller soundbars, the N400 comes with a remote control that’s actually fit for purpose; it’s larger, better designed, and comfortable to hold. It also includes all the buttons you’ll need, which have been intuitively laid out to make operating the soundbar as simple as possible.

Since the Samsung HW-N400 is an entry-level soundbar, its feature set is fairly basic. For a start, it uses a simple two-channel layout with two forward-firing speakers composed of mid-range drivers and wide-dispersion tweeters.

As a result of this particular configuration, there’s no dedicated centre channel for dialogue on the N400. However, since the Samsung supports only two-channel Dolby Digital and DTS, the lack of a centre channel won’t really affect the performance.

The N400 comes with two sound modes included: Standard and Surround. Standard is essentially a bypass mode that simply uses the front two speakers, making it ideal for music and certain TV programmes. Surround, on the other hand, is designed to deliver a more immersive experience with movies, TV dramas and games. 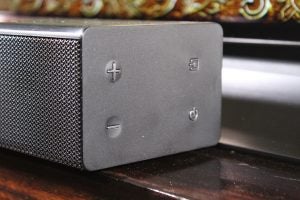 Like a lot of Samsung’s new soundbars, the N400 doesn’t support its multiroom system, which is a shame since this has become a popular feature recently. This decision is no doubt financial, and intended to keep down the cost by not including Wi-Fi.

Thankfully, the N400 does include Bluetooth. This means you can stream music directly to the soundbar from your smartphone or tablet. If you own a compatible Samsung TV then you’ll also be able to send sound wirelessly from your TV to the soundbar, thus reducing the amount of cabling.

In a recessed area at the bottom of the soundbar are the connections, where you’ll find an HDMI input and an HDMI output with support for ARC (Audio Return Channel). There’s also an optical digital audio input, a 3.5mm auxiliary audio jack, a USB port and a connector for the separate power supply. 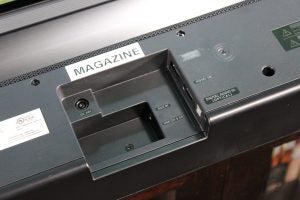 At first glance the connectivity of the N400 seems reasonable for a soundbar at this price point, because many don’t even include HDMI support. However, the included HDMI input and output are both version 1.4, which means the Samsung can’t pass 4K and HDR.

Whether this is a stumbling block will largely depend on your display and sources. However, the easiest solution is to connect all your sources to the TV, and then send all the audio to the soundbar via ARC, thus mitigating its lack of 4K and HDR passthrough.

I’ll admit to being slightly disappointed by the Samsung HW-N400. In part this is because so many of the company’s recent soundbars have sounded genuinely good. However, the N400 also seems over-priced compared to the competition.

It feels under-powered, too – and although this might be a coincidence, I couldn’t find any mention of the amplification in Samsung’s marketing. The N400 certainly isn’t loud, even when turned up to the max, although I’m pleased to say the audio didn’t distort at full volume. 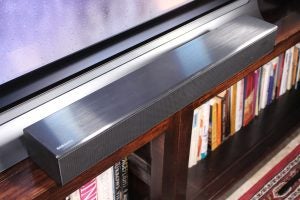 The N400 certainly isn’t a bad sounding ‘bar, and with two-channel content it could be very effective. When watching TV programmes such as Million Dollar Menu or the new documentary series Africa, the N400 delivered the music very well; despite the lack of a centre channel, dialogue also remained clear and focused.

The same was true when listening to music, and the N400 could deliver two-channel content with a decent level of stereo separation. There was was also a reasonable amount of detail to the reproduction, with a solid mid-range and some nicely rendered higher frequencies. Thankfully, the wide-dispersion tweeters didn’t seem to negatively affect top-end performance.

Where the N400 struggled was at the lower end of the frequency range. The soundbar doesn’t have any built-in woofers, just a small bass port at the rear left of the cabinet. As a result, there was very little in the way of bass presence. This was obvious as I listened to Red Right Hand by Nick Cave and the Bad Seeds.

This lack of low-end grunt was even more apparent once I moved on to TV dramas, movies and games. This type of content relies heavily on bass energy to give key sequences impact – and, unfortunately, that just wasn’t there with the N400. Blockbuster movies, in particular, lost some of their scale. 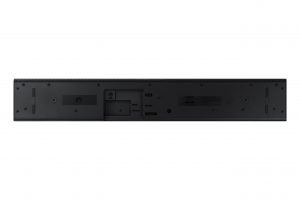 A film such as Pacific Rim, which uses low frequencies to give size and weight to the battling Jaegers and Kaiju, felt diminished because of the N400. The movie lacked that sense of epic destruction that the soundtrack was designed to convey. Despite the use of wide-dispersion tweeters, the front soundstage was also rather narrow.

This meant that there was little in the way of immersion when listening to soundtracks via the N400, although on the plus side dialogue remained clear. The Surround mode did little to improve the sense of immersion, often just adding echo to effects. As a result, I tended to stick with Standard, which is a passthrough mode that simply uses the N400’s two forward-firing speakers.

The Samsung HW-N400 is certainly worth considering if you have a smaller-sized TV. Its less- imposing cabinet is nicely designed and well made, making it an attractive way of boosting the audio quality of your TV. It also sounds reasonably good for a smaller two-channel soundbar, but it does suffer from a number of limitations.

For one thing the amplification is under-powered, so it won’t suit larger rooms, and the absence of a subwoofer results in a lack of bass. As such, the N400 has no issues with music and certain TV shows, but is less assured with TV dramas, movies and games, where it struggles to deliver a more immersive experience.

This is a shame, because I’ve been genuinely impressed by the sound quality on many of Samsung’s recent soundbars. Sadly, the N400 also lacks the increasingly popular multiroom functionality, and is unable to pass 4K and HDR. Ultimately, while the N400 can improve the sonic performance of smaller TVs, there are better soundbars available at this price point.

The Q Acoustics M3 is definitely worth considering, with a wide soundstage and deep bass despite the lack of an external subwoofer. The Acoustic Energy AEGO Sound3ar is another good-sounding choice that lacks HDMI support but does included a wired subwoofer. Finally, there’s the Polk Magnifi Mini, which has a separate wireless subwoofer and an HDMI output, making it a great overall package.

The Samsung HW-N400 is certainly capable of upgrading the audio of TVs with smaller screen sizes, but a limited set of features, under-powered amplification and no subwoofer put it at a disadvantage compared to some of the competition.