The HW-MS6500 is a curved version of Samsung’s superb HW-MS650 soundbar, which earned itself TrustedReviews’ prestigious Editor’s Choice badge. That’s a tough act to follow, but given this is practically the same soundbar in a curved suit, I’m expecting equally great things.

Like its straight stablemate, the HW-MS6500 is a single-body soundbar with special Distortion Cancelling technology that rules out the need for an external subwoofer, alongside a wealth of streaming features and multiroom wizardry.

We can debate the pros and cons of curved TVs all day long, but the bottom line is that many people own one and want a curved soundbar to go with it. If that’s you, read on to find out if the HW-MS6500 should be your first port of call. 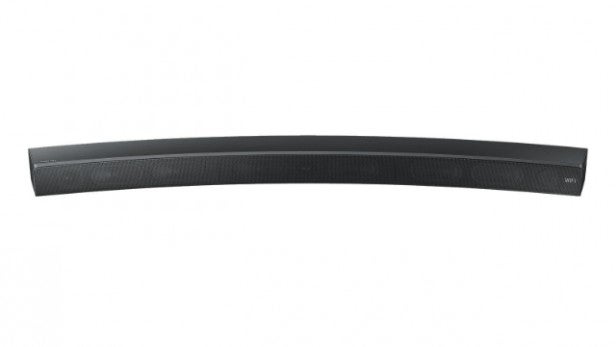 If you’re already sold on the idea of a curved soundbar then you’ll love the HW-MS6500. Like the HW-MS650, the dark grey styling is utterly classy, but the curvy contours make this version even more elegant.

Whether it’s placed on a TV stand or mounted on the wall, the HW-MS6500 sits inside the curve of the matching TV and forms an stunning visual partnership. There’s an optional mount kit (WMN300SB) that joins the TV and soundbar, through which both components can be powered via a single mains lead.

The weighty, well-engineered bodywork is commensurate with the price, while touches such as the chamfered front edge, brushed top panel and solid metal grille have a distinctly premium feel. The controls are housed on the right end panel, and include volume, input selection and power. Wi-Fi Setup, and Speaker Add buttons are placed on the back for multiroom installation. 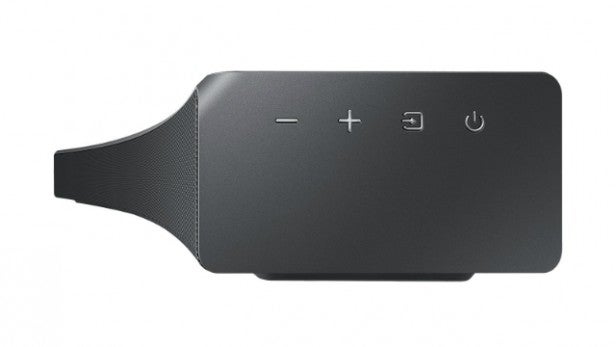 A small display on the far right of the front grille communicates selected inputs, volume and sound modes. Its off-centre positioning is unusual but necessitated by the dedicated centre speaker. The small display is harder to read than Samsung’s previous soundbars, but visible enough.

With no subwoofer in tow, you only have to find room for the soundbar, although at 1160mm wide that might be harder than it sounds if space is tight. This is a big soundbar for big TVs (no smaller than 55in, I’d say) so make sure you can accommodate it. Placed in front of my curved Samsung UE55KS9000, it nestled neatly into the space under the screen without encroaching on the TV’s remote sensor. 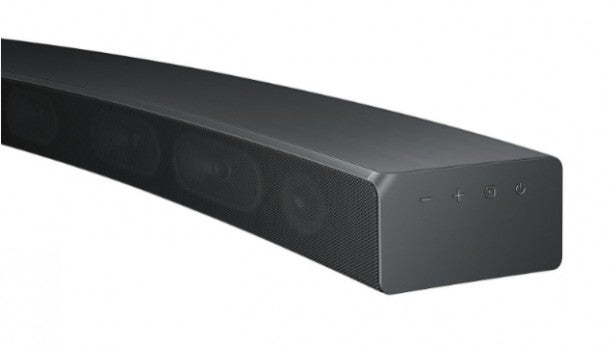 Like the HW-MS650, there’s a single HDMI 2.0 input and ARC output, both of which are fully geared up for 4K/60p, HDR, HDCP 2.2 and all that jazz. Extra inputs would have been useful for switching between games consoles, TV receivers and Blu-ray decks, particularly at this price.

They’re joined by optical and 3.5mm analogue inputs, plus a USB port for a dongle that connects the HW-MS6500 to a wireless surround speaker kit (SWA-9000S) and subwoofer, should you want to create a wireless 5.1 system. 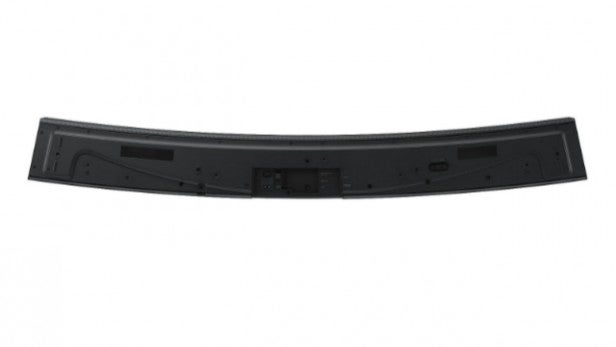 The HW-MS6500’s key selling point is its ability to deliver powerful bass without an external subwoofer. It does so using six 2 x 4.3-inch mid/bass drivers that move simultaneously, something Samsung calls Multi-Speaker Control. Long excursion technology increases the drivers’ depth of movement, resulting in the sort of big, beefy bass output you’d expect from an external sub.

Each channel is served by a wide range inverted dome tweeter, which minimises sound ‘lobing’ – colouration caused by interference between drivers – using a wider crossover range than regular tweeters (from 600Hz upwards, as opposed to 2.5kHz). It results in wider dispersion and sweet treble wherever you sit. 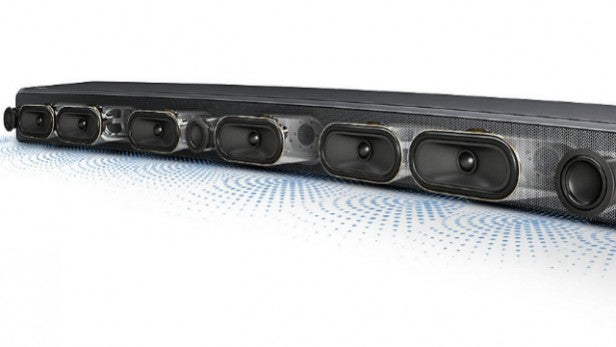 Its nine drivers are split over three channels, one of which is a dedicated centre. According to Samsung, the lack of an external subwoofer improves voice clarity over traditional soundbars because all the sound is coming from one place.

The built-in Bluetooth connection lets you stream audio from Samsung TVs, which will be music to the ears of cable-phobes everywhere.

Sound presets include Standard, Music, Clear Voice, Sports, Movie and Surround. Smart Sound selects the best EQ settings for the current content, but those who prefer a more hands-on approach can fiddle with the bass, treble and audio sync settings manually. 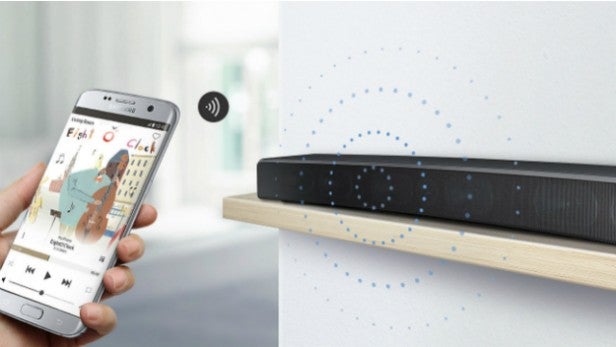 Simplicity is the focus of Samsung’s latest soundbars. The choice of ARC, optical or Bluetooth streamlines the TV connection process, while the absence of an external subwoofer eliminates placement headaches. Things get a little messier when you run a Blu-ray deck through the HDMI ports, but doing so lets you take advantage of the built-in Dolby Digital and DTS decoding.

Even the smartphone app makes things easy, particularly network setup – press the ‘Speaker Add’ button on the back and it quickly finds the soundbar. The app’s intuitive, uncluttered layout makes it easy to find music on NAS drives or streaming services. A row of tiles at the top displays the available sources; tap one and the content is listed below. 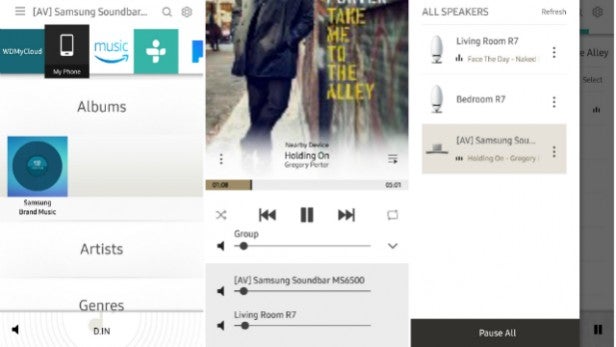 Elsewhere, a sidebar menu allows you to control your connected speakers. Here you can tweak the sound for each one with a seven-band equaliser, or group selected speakers together. Clearly marked dialog boxes make every action a cinch.

The Now Playing screen is dominated by cover art with the playback controls at the bottom. When playing through a group of speakers, volume sliders for each unit are accessed at the bottom of the screen.

Sharing the curved design of Samsung’s Smart Remote, the HW-MS6500 zapper is comfortable to use. The stripped-back buttonry is thoughtfully arranged and I love the switches that control volume and bass, although the lack of a corresponding treble control is a minor niggle – to adjust it, you have to access a separate settings menu.

The ‘One Remote’ concept lets you control the HW-MS6500 using a Samsung TV remote when connected via HDMI, Wi-Fi, Bluetooth or optical. You can adjust volume, EQ and sound modes, the latter appearing as an option in the TV’s Home Menu. 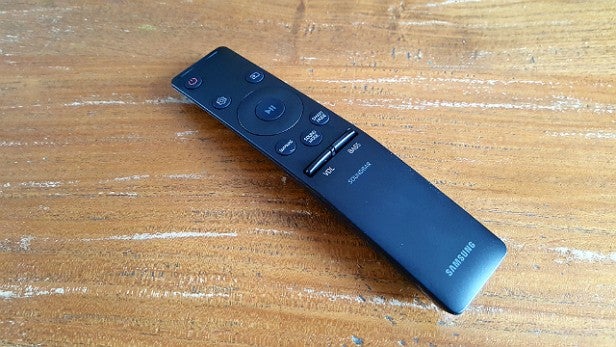 After blasting a selection of Blu-rays, the good news is that the HW-MS6500 matches the HW-MS650’s amazing performance pound for pound. It delivers the same huge soundstage, detailed treble and powerful bass, a feat made all the more remarkable by the absence of an external subwoofer.

As the Death Star destroys Jedha City in Rogue One, the HW-MS6500 reveals its own secret weapon: deep, devastating bass. The huge tsunami of rubble is accompanied by a rumble so thunderous you’d swear there was a sub under the sofa. 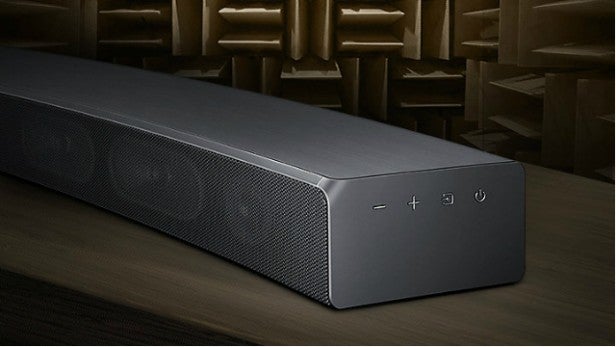 With everything squeezed into a single box and Samsung’s nifty audio tech hard at work, bass is tight and seamlessly integrated. It doesn’t become flustered by rapid blaster shots and percussive parts of the score, and never sounds boomy or ponderous. Samsung says it goes down to 38Hz, which is remarkably low by soundbar standards and translates into deep, weighty bass notes.

The HW-MS6500’s convincing sense of scale makes Rogue One’s battles feel big and immersive. Star Destroyers collide with a mighty roar and explosions on Scarif pound through my chest. Its performance has the air of a bigger separates system.

There’s a broad soundfield with clearly placed effects. The bar’s physical size ensures a good spread of sound and the Surround mode opens it up further – although don’t expect any actual surround sound. 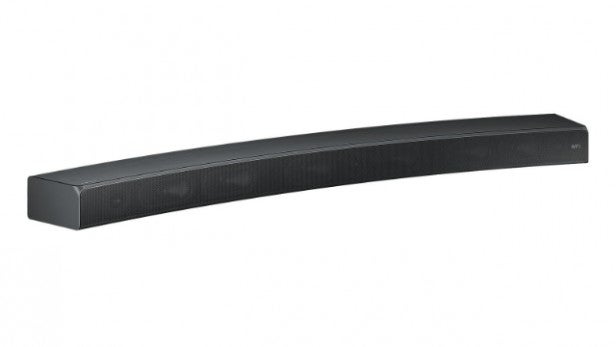 Another aspect of the HW-MS6500’s performance that I didn’t expect is its smoothness and subtlety. Past Samsung soundbars have sounded a little brash and gloss over the finer details of a movie’s soundtrack, but here there’s plenty of nuance and a pleasing sense of fluidity.

From the rustle of sand to the metallic click of a Death Trooper’s blaster, every scene teems with high-frequency detail. You can listen to the HW-MS6500 up loud for long periods without getting fatigued. At really loud volumes the treble starts to spit, but only once you’ve gone well beyond a comfortable listening level. 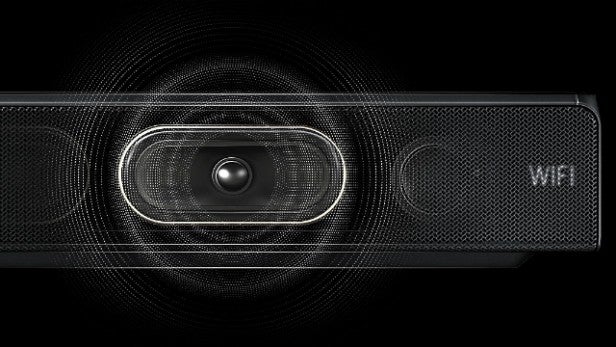 The dedicated centre does a fine job, whether you’re inspecting the accuracy of Guy Henry’s Peter Cushing impression or listening to the news on TV. Dialogue has terrific presence and clarity, while deeper tones are beefed up by the built-in woofers.

This mature performance extends to music playback. My view that the HW-MS650 is the most musical soundbar Samsung has produced is reinforced by its curved companion. It unpacks sonic textures that some soundbars miss, while a solid, detailed mid-range brings out the emotion in vocals and instruments.

But the icing on the cake is the well-honed bass output, which provides agile, weighty support to drums and basslines. It’s a cohesive, full-bodied sound, which can be customised further using the dedicated tone controls and the app’s EQ settings. 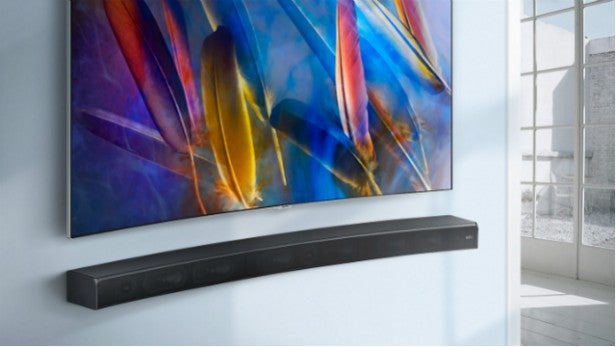 If you’re in the market for a soundbar to match your curved TV and don’t have space for an external subwoofer, then this is a no-brainer. The HW-MS6500 packs everything I love about the superb HW-MS650 into a design that looks great beneath a curved Samsung set.

It isn’t cheap but fully justifies the price in terms of build quality, features and performance, while installation and operation are remarkably simple.

However, with interest in curved TVs dwindling, and Samsung ploughing a lone furrow in the market, the HW-MS6500 is a niche product with narrow appeal. It’s a fabulous soundbar but only those with curved TVs need apply, and for that reason it doesn’t quite merit the top marks lavished on the more universal HW-MS650.

Its appeal is limited to curved TV owners, but there’s no denying the HW-MS6500’s quality. It conjures up a huge soundstage and masses of bass without a subwoofer in sight, and backs it up with a wealth of features and simplified setup.