If you like the idea of Dolby Atmos but feel daunted by the clutter involved, then Samsung’s HW-K850 might be the answer. This soundbar boasts built-in Atmos speakers, eliminating the need to install speakers in your ceiling or buy separate modules.

It’s a more affordable version of the pricey HW-K950 soundbar, which I praised for its explosive sound quality and extensive features. The K850 knocks a good £400 off the price, but as a result it loses the K950’s wireless rear speakers, making this a 3.1.2 system as opposed to 5.1.4.

Despite the price drop, £900 is still rather expensive for a soundbar/sub combo, but with a feature list that includes Atmos, multiroom, music streaming and Bluetooth, I’m hoping it’s justified.

Given the amount of tech crammed inside, Samsung has done a good job of making the HW-K850 as compact and attractive as possible. The body is mostly fashioned from black aluminium mesh with a chamfered front edge linking brushed metal caps at both ends. These materials give the K850 the sort of solidity and sturdiness you’d expect for the money, although luxurious is pushing it slightly.

That said, there’s precious little stealth or elegance about the design. It’s not as intrusive as Yamaha’s portly YSP-5600, but this chunky block commands attention on a TV stand. At 1210mm wide, it isn’t suited to small TVs, and the 817mm height could encroach on your TV’s remote sensor – although it sits nicely in the gap between the stand and screen of my Samsung UE55KS9000.

At one end, a row of touch-sensitive buttons governs volume, input selection and power, while an LED panel behind the front grille displays information clearly. 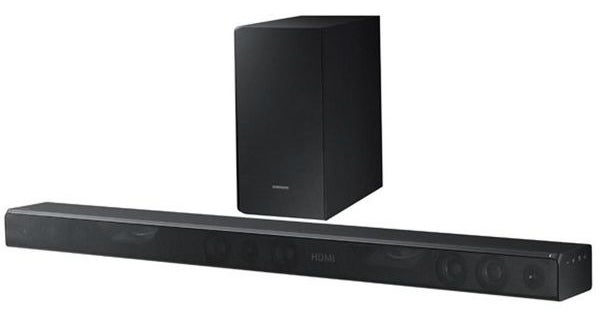 The generous socketry includes two HDMI inputs and one ARC-enabled output, which pass through 4K/60p and support HDCP 2.2 – your Ultra HD sources are in good hands. You’ll also find optical, 3.5mm minijack input and a service-only USB port. It’s not as generous as the similarly Yamaha YSP-2700, which adds a third HDMI, coaxial and RCA inputs, but it’s a healthy selection.

The subwoofer is a functional black box with a side-firing woofer. The matte finish is pleasant and its slim width should make it easy to place next to your TV, but with a wireless connection the living room’s your oyster. One of the front corners is even chamfered to match the soundbar.

Built-in Atmos is the headline act, the height channels for which come from two 6cm up-firing drivers on top. They’re designed to ping effects off the ceiling so your ears think they’re coming from above. The front left, right and centre channels get two 5cm midrange drivers and a 35mm tweeter each, taking the bar’s driver total to eleven. They’re driven by 360W of amplification.

The HW-K850 doesn’t skimp on streaming features. Hook it up to your home network via Wi-Fi and you can stream music from DLNA servers plus Spotify, TIDAL, Deezer, Qobuz, Napster, 8tracks, JUKE, 7digital and Murfie. These are all available through Samsung’s Multiroom smartphone app, which as the name suggests lets you play music on multiple Samsung speakers around the house. 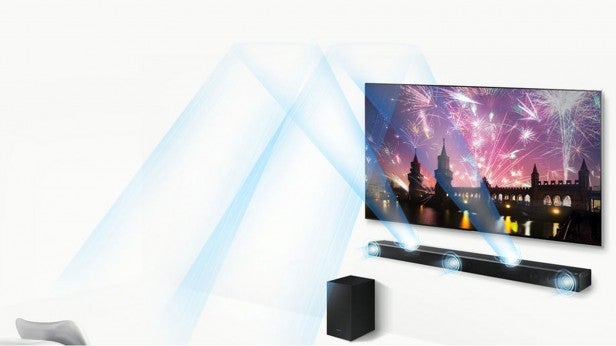 You can even play audio from a Samsung TV over a network, or deploy two wireless speakers (like the R3 or R7) as surround channels, which might make up for the missing Atmos surrounds (it’s a shame you can’t buy these separately).

There’s built-in Bluetooth and a range of audio presets – Standard, Music, Clear Voice, Sports, Movie and Night. You might find it useful to switch between these to suit the source, but I was happy to leave it in Standard. The Surround Sound mode creates 3.1.2 sound from non-Atmos sources. There’s built in Dolby Atmos and True HD decoding, but DTS is limited to two-channel.

The HW-K850’s remote is an unusually stylish affair. Its arched back, smooth matt finish and minimal button layout not only look nice but make it comfortable to use. The use of silver switches for the main and subwoofer volume is a nice touch, while a ring in the middle controls music playback.

Audio settings are adjusted using the remote, not the app. You can adjust the treble, bass and channel levels, including the two Atmos drivers. Press the Effect key to toggle through the sound presets.

Network connection is carried out through the Multiroom app, which searches for the soundbar automatically and prompts you to enter your Wi-Fi password. It’s a hassle free process – I had no trouble linking it with my existing multiroom speakers. Subwoofer pairing happens automatically and ARC worked first time. 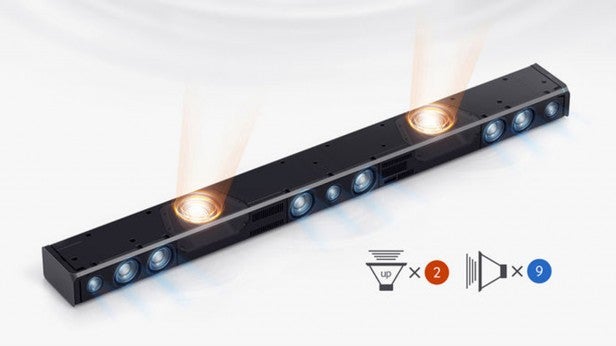 Samsung’s multiroom app has been through several incarnations but the latest is by far the best – it’s slick, straightforward and attractive. The home page displays available servers and services along the top; tap one and music is listed in the white space below.

Tap the icon in the top left corner and connected speakers are listed in a sidebar menu. Here you can group them together and play the same tracks through them all. There’s an option to use two speakers in a stereo pair, as well as a seven-band equaliser.

Play Star Trek Beyond and the Samsung delivers the spectacular Dolby Atmos soundtrack with aplomb. We’ll get to Atmos in a moment, but what jumps out most is the size of the soundstage. It goes big and goes loud, and doesn’t have any trouble filling a large living room.

This power lends scale and drama to the movie’s extravagant action scenes. The choral voices and explosions that accompany Krall’s ambush on the Enterprise form a massive wall of sound, with a deep rumble as spaceships pass across the screen.

Naturally, the powerful subwoofer is the driving force behind this large-scale sound, but the up-firing Atmos drivers help by adding height to the front soundstage.

As Kirk converses with the Teenax in the opening scene, booming voices echo round the room and you feel like you’re there in the chamber. When Krall’s swarm of ‘bees’ rips the Enterprise to pieces, the objects circulate in the space above the TV screen.

Similarly when the crew is stranded on Altamid, the upper soundstage fizzes with fluttering insects, floating objects and lasers shooting through the air. 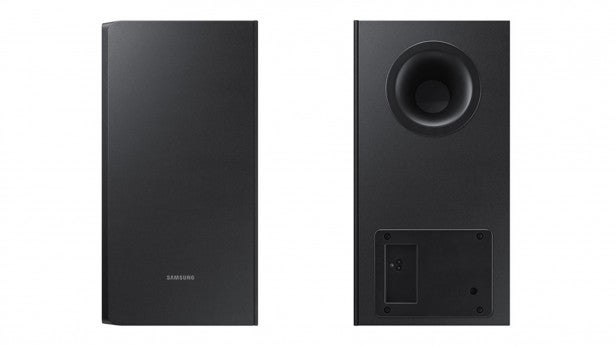 That said, I never felt that the Atmos effects were directly above me; all the height is located at the front of the room. The step-up HW-K950 is more effective at creating a ‘dome’ of sound with its Atmos surround speakers. Even so, the K850 achieves a better sense of vertical expansion than any ‘regular’ soundbar.

The HW-K850 doesn’t just expand the sound vertically. The soundfield is remarkably wide, with effects projected well beyond the sides of the TV. That helps convey size and distance during the movie’s intergalactic battles.

Another strength is dialogue reproduction. Voices remain clear in the midst of a dense action scene, but during quieter moments you can appreciate their body and detail.

Like most Samsung soundbars, the HW-K850’s attacking, edgy presentation guarantees excitement. The shootout aboard the Enterprise crackles with vigorous crashes and blaster shots, and it doesn’t sugar-coat the brutal fight scenes. 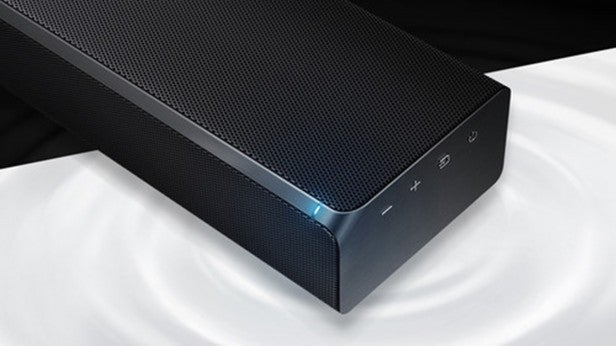 However, this can be a tad overwhelming when there’s loads going on, particularly with the volume up high. It’s not brash or unpleasant, just a characteristic of the Samsung’s sound that may not suit everyone.

And as I found with the HW-K950, the subwoofer could do with greater control and tautness. It gets a little overenthusiastic at times and can be ponderous during fast-paced moments.

With music the Samsung offers a rhythmic presentation with plenty of punch. When the Star Trek crew blast Sabotage by The Beastie Boys, the beats boom and thud while the guitars and rap vocals cut through clearly. It’s well-balanced, with decent treble clarity allowing musical detail to seep through. Again, the rivals mentioned above are sweeter and more expressive but the Samsung does a good job.

The idea of a one-box Atmos system practically sells itself, but this terrific soundbar has many more strings to its bow than 3D audio. It’s well-made, packed with features and easy to use, particularly as part of a multiroom system.

It’s also a powerful, exciting performer, creating a massive soundstage enhanced by height effects from the upfiring Atmos drivers. For those reasons it deserves a place on your shortlist, but those looking for a smoother, less intense listening experience might like to consider the Cabasse Stream BAR or DALI Kubik One – if you’re willing to sacrifice Atmos, that is.

Samsung’s clutter-busting Atmos soundbar lacks the refinement of high-end rivals, but makes up for it with a huge soundstage, bags of features and slick multiroom operation.