With its dynamic sound, smart design and wireless features, the HW-K450 is a terrific budget soundbar for those who want better TV sound without all the bells and whistles.

The HW-K450 is a mid-range 2.1-channel soundbar that lets you upgrade your TV’s sound quality without breaking the bank. This affordable system eschews the cost-adding features of Samsung’s premium models but keeps the essentials, such as a wireless subwoofer, Bluetooth and HDMI sockets. Let’s take a closer look. 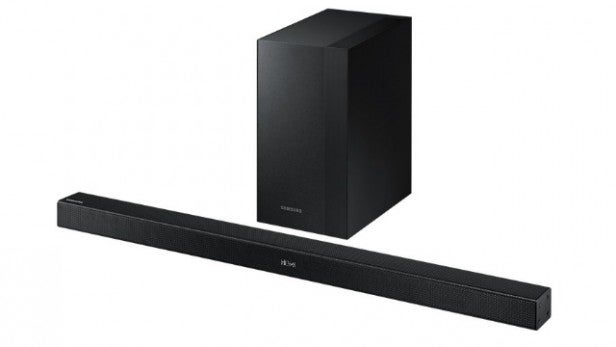 Unlike some of Samsung’s other soundbars, the HW-K450 is straight, not curved. There’s nothing flashy or fussy about the design – it’s just a simple rectangular bar styled in a neutral black finish. The lack of embellishments allows it to blend in discreetly when placed in front of a TV.

The bar is entirely covered in a black metal grille, which gives it a solid, high-quality feel. There are brush-effect caps at both ends; one end sports power, volume and input selection buttons, but they’re not touch-sensitive – a reminder of the affordable price tag. On the front is a nicely sized display panel that spells out inputs and volume levels in bright, easy-to-read digits.

At 908mm wide, it’s relatively small and would therefore be dwarfed by TVs over 55in. You can place it on a TV stand or mount it on the wall – all the bits you need are in the box. 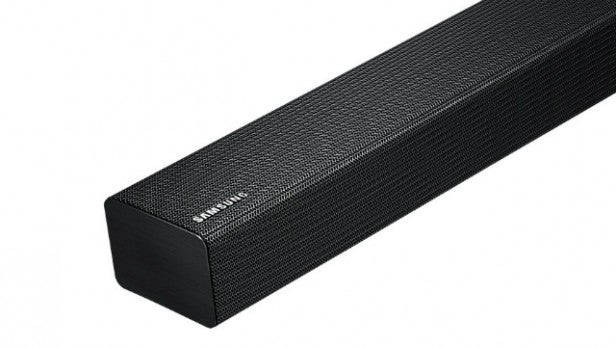 Two recesses on the bottom house a decent range of sockets. Most notable are the HDMI input and output, which let you pass through 4K and 3D pictures from a Blu-ray deck, dropping off Dolby Digital or DTS signals along the way (the HW-K450 has built-in decoders for both).

They’re joined by optical and 3.5mm analogue inputs, plus a USB port that lets you play media from flash drives. Each recess has a groove that allows the cables to exit neatly.

The subwoofer is a simple black box dressed in a patchwork of dappled, brushed and glossy panels, with black cloth covering the side-firing 6.5-inch driver. It’s compact enough to accommodate without much upheaval, and the wireless connection is hugely convenient – but the thin, lightweight cabinet doesn’t exactly inspire confidence.

Before discussing what features the HW-K450 does have, it’s worth pointing out what’s missing – namely, multiroom functionality and music-streaming services. There’s no Wi-Fi at all, so wireless music streaming is limited to Bluetooth, which makes it much easier to setup.

You can pair the HW-K450 with a SoundConnect-compatible Samsung TV and beam audio wirelessly, or create a 4.1 channel system by adding Samsung’s optional wireless rear speaker kit (SWA-8000S, £100). It’s easy to take such features for granted, but they’re a godsend for those who can’t stand the sight of cables.

Operating the HW-K450 is a piece of cake, largely thanks to the terrific remote. It’s slim and ergonomic, with buttons in all the right places. The keys are helpfully shaped into icons that denote their function, while dedicated Sound Control buttons make it easy to optimise the sound.

The subwoofer obediently pairs with the bar automatically; likewise, my Samsung TV paired quickly via the magic of SoundConnect. A connection message appears on screen when you select the “TV” input; just hit OK and you’re all set.

Wi-Fi control may be off the agenda, but Samsung has created a Bluetooth-based Remote App that allows you to control the bar’s basic functions and media playback, or tweak the sound settings. It uses a similar design to Samsung’s multiroom app, with its large jog dial for skipping tracks and sidebar menus that slide in when you tap the relevant icon. It looks slick and sophisticated – but, more importantly, it’s remarkably easy to use. 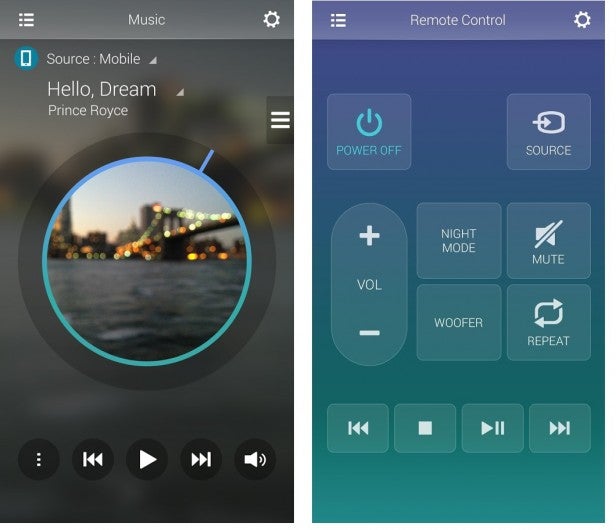 Hooked up via optical or SoundConnect, the HW-K450 works wonders with TV programmes. Watching The Fall on BBC Two HD, the show’s dialogue is consistently clear and dynamic – you won’t miss a single word, even Gillian Anderson’s hushed tones. News, quiz shows, soaps; every programme has excellent presence and volume.

It gives audio a real lift, adding punch and body during dramatic moments. Theme tunes sound solid and bassy, while football crowd noises sound expansive. If you’ve had enough of the weedy, indistinct sound trickling from your TV’s speakers, the HW-K450 will be a real tonic.

It also brings these qualities to bear when watching movies. I fished out The Empire Strikes Back on Blu-ray and really enjoyed how the Samsung handled its iconic soundtrack (this time using the HDMI ports).

Sure, it’s far from “audiophile” and there are a few issues, but its lively tone, clear dialogue and enthusiastic subwoofer bring the sci-fi classic to life. 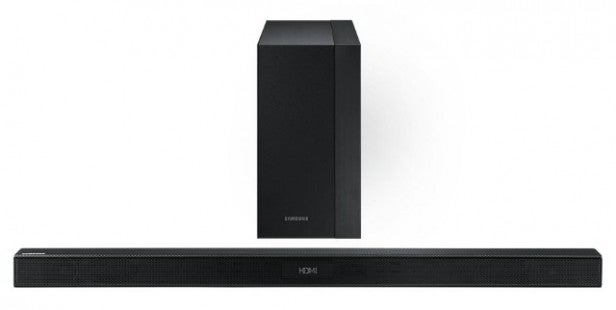 As Imperial forces attack the rebels on Hoth, the explosions and laser blasts are solid and biting. It’s a crisp, incisive presentation, with good top-end clarity. Effects are cleanly separated and precisely placed, giving you a good idea of where they sit in the soundstage despite having only two speaker drivers to play with.

Some may accuse the HW-K450 of being clinical, lacking the mature, full-bodied quality of larger soundbars with more complex driver designs, but its overall clarity can’t be denied.

The surround mode produces an immersive effect. There’s no suggestion of actual surround sound – it’s entirely pinned to the front of the room – but it does an effective job of widening the stage. As for the EQ presets, only the Standard and Music modes are worth bothering with. 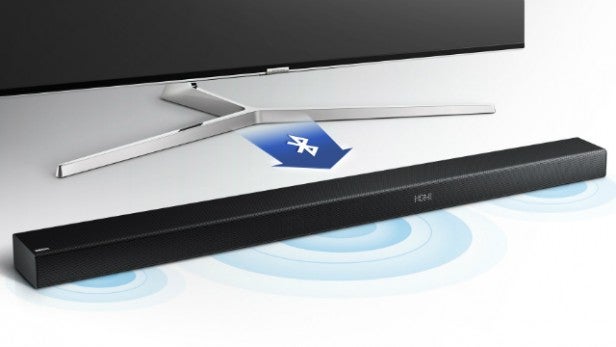 The subwoofer does a better job than its plasticky construction suggests. Star Destroyers lumber past the camera with a stout rumble, which provides a good sense of scale. There’s pleasing weight as the AT-ATs topple to the ground, and a heavy pop when Luke crash-lands on Degobah. It could do with more slam and grip, but for the money it’s perfectly acceptable.

Less acceptable is the harsh tone when playing certain effects, such as the Hoth Wampa’s roar as Luke slices its arm off. When the action gets busy and complex, it can be a slightly uncomfortable listen with the volume up high. This forward tone isn’t unusual for a budget soundbar, which are often tuned to deliver maximum impact from their small full-range drivers.

The HW-K450 offers enjoyable music playback, handling a variety of genres in a crisp, well-balanced manner. The clear, precise mids and highs lend texture and presence to instruments, while the subwoofer adds body to basslines and drums. It doesn’t have the most finesse nor provide the most cohesive musical performance ever, but it isn’t bad for a £250 soundbar.

If you want an affordable soundbar and don’t care about Wi-Fi or multiroom then the HW-K450 is a decent choice. It delivers a clear, lively sound with excellent dialogue reproduction and a healthy amount of bass through the wireless sub. It’s particularly good with TV material, making speech very easy to hear and beefing up the bottom end.

Admittedly, its sound quality isn’t the most refined or full-bodied around – there’s a touch of harshness at higher volumes when the action gets frenetic, and there’s little variation in the subwoofer’s rumbling – but on the whole it’s an enjoyable listen.

And when you throw its robust design, ample socketry, easy setup and slick Remote App into the mix, the HW-K450 starts to look like a tasty proposition for the money.

With its dynamic sound, smart design and wireless features, the HW-K450 is a terrific budget soundbar for those who want better TV sound without all the bells and whistles.