The HW-J7500 is a soundbar designed to partner Samsung’s curved TVs. It sits one step down the range from the flagship HW-J8500, losing a few of its features but selling for around £100 less. This bar sports eight drivers and comes with a new wireless subwoofer.

Whether placed on a TV stand or hung on the wall, the soundbar fits within the curvature of the screen and adds to the immersive experience, as well as looking less awkward than a straight soundbar.

The HW-J7500 doesn’t jump out and grab you, but up close you can tell it’s a well-made and elegantly-styled soundbar. Build quality is excellent – the 35mm-high speaker mesh is sandwiched between thick slabs of brushed black aluminium, making it feel weighty and solid. If you own one of Samsung’s silver curved TVs (JS9000 or JS9500, for example) then the silver HW-J7501 is a better match.

On top is a cluster of buttons governing volume, input selection and power. A dot matrix display shines through the front speaker mesh, indicating volume levels and selected inputs, and then disappears when idle. 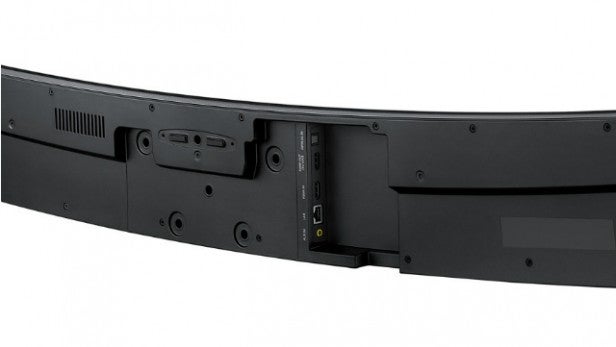 In a recess on the bottom is a generous set of connections, including HDMI input and ARC output, optical digital input, 3.5mm mini jack input and an Ethernet port. There’s also a USB port that lets you play music directly from flash drives.

We’d have liked more HDMI inputs for this price, which would have allowed the HW-J7500 to act as a switcher for multiple HD devices, but with ARC and optical on board it’s not a deal breaker.

On the back are two buttons that let you integrate the HW-J7500 into a multiroom system via Wi-Fi, pairing up with other wireless Samsung speakers like the WAM350, WAM550 and WAM750 (which can also be used as surround speakers in a 4.1 setup). You can stream music to the HW-J7500 using Samsung’s multiroom app.

This year’s curved soundbars come with a new cuboid subwoofer, a radical departure from last year’s cube-shaped subs. The Multi Air Gap (MAG) design is shallower, making it easier to accommodate. The bodywork is plasticky but the brush-effect top panel and black cloth look stylish. You can place it upright or lay it flat on the supplied feet.

The HW-J7500’s Bluetooth connection not only lets you stream music from mobile devices but also play audio from a Samsung TV equipped with SoundConnect. 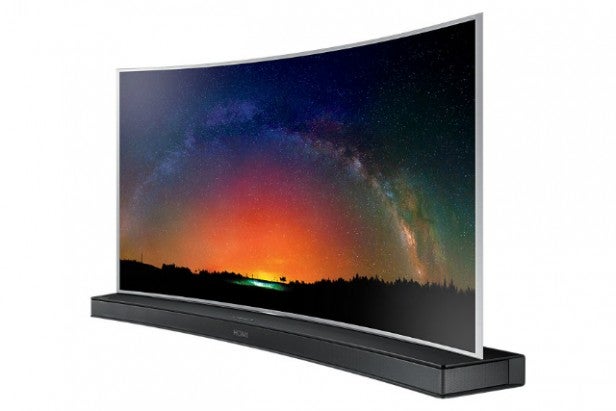 The HW-J7500 features eight speaker drivers, losing the centre speaker found on the 9.1-channel HW-J8500. Two of these drivers are found on the side-facing end panels and are designed to broaden the bar’s surround sound. Each driver has its own amplifier and active crossover, allowing the soundbar to produce sound with greater accuracy and clarity. Total power output is quoted as 320W.

There’s on-board Dolby Digital decoding and lots of sound modes to play with, including Clear Voice, which minimises background noise to make dialogue easier to hear. There are Standard, Music, Voice, Sports, Cinema and Night presets, plus a Surround Sound mode.

Another appealing feature is hi-res audio playback. The soundbar supports FLAC files up to 96kHz/24-bit, which should offer sound quality benefits over compressed audio formats such as MP3, AAC and WMA (which are also supported). Whether or not a soundbar is the best way to hear the hi-res difference is up for debate, but hats off to Samsung for supporting it.

The soundbar also attempts to polish up lower-quality audio files using High Frequency Restoration (HFR) which reinstates the audio data lost in the compression process, taking it back to what Samsung describes as ‘CD quality’.

The HW-J7500 is a true set-and-forget product. Installation is simple, particularly if you’re simply hooking up your TV’s optical output or ARC HDMI socket. The latter requires some fiddling around in your TV’s CEC settings, which was fairly straightforward on our Samsung UE55HU7500. The soundbar and subwoofer pair automatically.

Things get more complicated when integrating the soundbar into a multiroom system, but Samsung’s Hub and multiroom app do their best to guide you through the process.

The informative front display displays your selections in large digits. The remote is slim and compact but comfortable to hold. It sports a cluster of stylised buttons at the top (volume, Bluetooth playback) and two rows of buttons to tweak the sound.

The Sound Effect button lets you toggle through the presets, while Sound Control lets you adjust the bass and treble. Hit the Woofer button and you can set the sub volume from -12 up to 6.

The HW-J8500 delivered the best performance we’d heard from a Samsung soundbar, and thankfully the J7500 isn’t too far behind. The missing middle speaker means you don’t get the same spread of sound right across the bar, but it’s not a major loss.

Like any good soundbar, it restores the sense of scale and presence in movie soundtracks that gets lost through weedy TV speakers – the step-up in quality from our 55in set is massive.

Most of the credit for this should go to the subwoofer, which adds depth and weight to action scenes, but the soundbar’s crisp treble and clear midrange provide snappy effects and audible dialogue. It’s a fun, entertaining listen, full of energy and vigour, but crucially it doesn’t suffer from distortion or hardness. It’s not perfect, as we’ll discuss later, but a definite improvement on previous generations.

Among our test scenes was the opening sequence from X-Men: Days of Future Past. The subwoofer kicks into life when the Sentinels attack the mutants, doling out heavy thuds as the robots burst through the roof and a deep rumble as Sunspot engulfs one in flames. In its factory setting the sub sounds a little boomy in our room, but after lowering the level to -3 it calmed down considerably.

The scene is also peppered with detail, such as the sharp crunch and glassy tinkle when a Sentinel crushes Iceman’s head and the crackle of electricity when Blink opens a portal. Clear Voice also works well – Patrick Stewart’s expository monologues are articulated clearly and remain unhindered by background ambience. The sub adds subtle depth to Hugh Jackman’s growly tones. 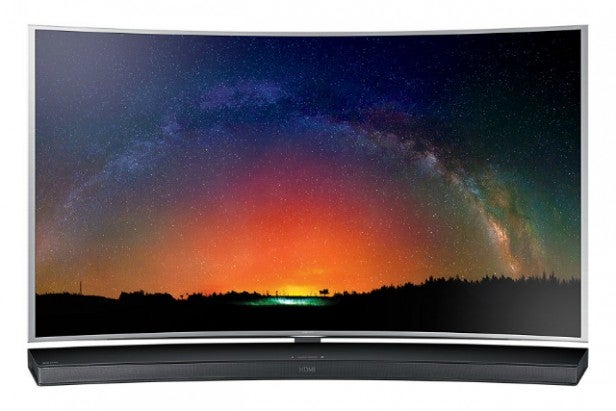 The soundbar doesn’t stumble when you crank up the volume. We played the above scene with the level around the 40 mark (the maximum is 50) and were impressed by how well it kept its composure.

One or two foibles threaten to spoil the party. Like the HW-J8500, bass could be tighter and better defined – it loses grip when the action gets hectic – but you certainly can’t argue that there isn’t enough of it.

It’s not the most insightful performer either. Soundbars such as the Q Acoustics M4, Focal Dimension and DALI Kubik One tease out greater texture and nuance from the soundtrack. Of course, none of these bars is curved, but they are great examples of the type of sound we’re looking for.

Another issue is that the soundbar has limited bass extension, relying on the subwoofer to do all the low-frequency heavy lifting. As an experiment, we switched off the sub and were surprised by its thin sound and limited bass presence.

Obviously you’d never use the soundbar without the sub, but the upshot of the bar’s limited range is that it doesn’t gel as cohesively with the sub as it might.

You might not notice or even care about this stuff – and why should you when the sound is this entertaining – but if you’re serious about sound quality then we really do recommend checking out some of the ‘straight’ soundbars mentioned above before making your decision.

We flicked through the sound presets and found that Standard offers the most satisfying EQ balance. Cinema pushes low frequencies too zealously, while Voice and Music emphasise the midrange too much for our liking. The side-firing drivers and Surround Sound mode deliver a wide and spacious image that feels pleasingly immersive, despite offering no actual surround effects.

The first thing to say is that Samsung is currently the only brand selling curved soundbars, so for owners of curved TVs it’s a no-brainer.

If you do take one home, we doubt you’ll be disappointed by its crisp, bassy and dynamic sound. It fills the room, renders dialogue clearly and uses its eight drivers to deliver a decent sense of width. There are issues with bass performance and it could do with more top-end finesse, but on the whole it offers a highly enjoyable sound.

It’s also stylish, solidly built and bursting with features, including multiroom, Wi-Fi, Bluetooth and hi-res audio playback. For these reasons, we’re willing to give the HW-J7500 our seal of approval despite its sonic shortcomings.

However, if you’re willing to forsake the curved design you can get better sound quality for your money. ‘Straight’ soundbars from the likes of Q Acoustics, Focal, Arcam and DALI offer greater cohesion, finesse and power, in some cases without the need for an external subwoofer.

Not the last word in sound quality, but if you want a sound system to match your curved TV then you won’t go wrong with the HW-J7500 thanks to its entertaining sound, generous features and smart design.