The HW-J6500 is a soundbar from the lower reaches of Samsung’s curved range. It isn’t the most affordable in the line-up – that accolade goes to the £500 HW-J6000 – but it’s easier on the wallet than the HW-J8500 and HW-J7500, both of which rated highly when we reviewed them earlier this year.

Like its premium siblings, the HW-J6500 is designed to nestle within the bend of Samsung’s curved TVs, but its smaller size is best suited to Samsung’s 48in models. The HW-J7500 and J8500 are designed for 55in and 65in sets respectively.

Elsewhere, the HW-J6500 drops the speaker configuration to 6.1, compared with the 9.1-channel HW-J8500 and the 8.1-channel HW-J7500. Otherwise, the same range of features is packed into a slim, discreet speaker and subwoofer that boost TV sound while keeping clutter to a minimum.

Blending in seems to be the order of the day with the HW-J6500. Its plain black styling looks fairly nondescript from the sofa, with no jazzy flourishes visible. The alternative silver and white versions (HW-J6501 and HW-J6502 respectively) are more glamorous, however.

Take a closer look and you’ll spot some nice details, though, like the top panel’s brushed finish and silver stylised buttons – these include on/off, input selection and volume. The curved aluminium speaker mesh is solidly clamped between the top and bottom panels, with an invaluable dot-matrix display in the centre that displays volume levels and selected inputs. 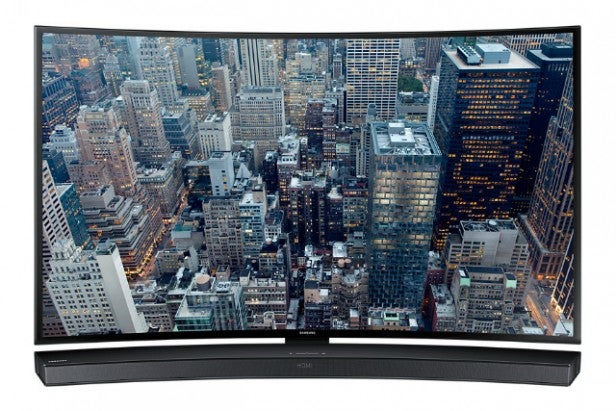 Inevitably, build quality isn’t up to the same luxurious standard as the HW-J8500 and HW-J7500. Their premium aluminium bodywork is replaced by plastic, which makes it less substantial overall.

There’s a choice of mounting options. You can place it freestanding in front of your TV, or attach it to the stand of a compatible Samsung TV. These include the JU6700, JU6500, JU7500 and JU6610 models. Alternatively, you can wall-mount it using the supplied brackets.

Rear connections cover most bases. There’s an HDMI input and ARC-enabled output, an optical digital input, a 3.5mm mini-jack input, a USB port for music playback and an Ethernet port to unlock the bar’s multiroom functionality – although most users will no doubt opt for the built-in Wi-Fi connection. We’d have liked a second HDMI input at this price, but overall it’s a decent selection.

Joining the soundbar in the box is a slightly smaller version of the Multi Air Gap (MAG) subwoofer used by the HW-J8500 and HW-J7500. Its upright cuboid design is unusual, but easier to accommodate than Samsung’s previous cube-shaped subs. It’s solidly constructed and remarkably stylish, with a lovely combination of glossy panels, black cloth and brushed plastic. The best part is that it’s wireless, which allows you to place it anywhere in the room.

The HW-J6500 is a 6.1-channel speaker, but there’s no dedicated centre speaker or side drivers present in the HW-J8500. Each driver is powered by its own 22W amplifier with an active crossover, the aim of which is to produce specific frequencies more accurately. The subwoofer’s 7in woofer is driven by a 168W amp, taking the total power output to 300W.

Thanks to the built-in Wi-Fi connection, the HW-J6500 can be incorporated into Samsung’s multiroom ecosystem, orchestrated by Samsung’s superb smartphone app. You can stream tracks from the phone, DLNA servers, Spotify, Deezer, Murfie, Napster, Qobuz, 7digital and 8tracks, or access radio through Rdio and TuneIn. You can also use it to switch between sources connected to the soundbar.

The Samsung also offers Bluetooth for easy music streaming and TV SoundConnect, which sends audio from a compatible Samsung set to the soundbar wirelessly.

A bunch of sound modes cater for different types of content. They include Music, Voice, Sports, Cinema and Night, while the Standard mode plays audio in its original state. Surround Sound Expansion adds “depth and spaciousness” to the soundstage, while bass and treble controls let you fine-tune the tone.

You’ll also find on-board decoding for Dolby Digital 5.1 and DTS 2.0 through the HDMI and optical digital inputs, and you can play music from USB devices connected to the rear port. Supported formats include MP3, WMA, AAC, WAV, OGG, APE, FLAC and ALAC (the last two up to 192kHz only). When playing file formats such as MP3 and WMA, High Frequency Restoration attempts to replace the audio data lost in the compression process.

Even though our TV isn’t curved, the HW-J6500 nestles nicely in the space in front and sits firmly on its rubber pads. Cables are easy to plug into the side-facing sockets, thanks to some thoughtfully placed grooves on the back.

Like most soundbars, setup is easy. The simplest way is to connect your TV’s optical output to the soundbar – the Samsung will play whatever you’re watching. Audio Return Channel does the same job via HDMI, but you’ll need to activate CEC functionality in the TV’s setup menu. Connect a Blu-ray deck to the HDMI input and the Samsung extracts the audio data while passing video to your TV – this includes 3D and 4K signals.

The subwoofer pairs automatically, with a blue light on the front confirming the connection. You can reset the connection if necessary using a button on the back.

Day-to-day operation with the remote is hassle-free. The buttons are styled into their respective functions – making them easy to find – and click firmly when pressed.  We love the slim, ergonomic shape and intuitive layout, which makes operation second nature.

The Source and Sound Effect buttons toggle through inputs and sound modes quickly. Dedicated Sound Control and Woofer keys let you fine-tune the tone and bass, using the track skip keys to go up and down.

Connecting the soundbar to a multiroom system involves firing up the app and holding down the SPK ADD button on the rear for five seconds. The app finds the speaker, asks for your Wi-Fi router’s password and then gives a loud chime when it’s connected. 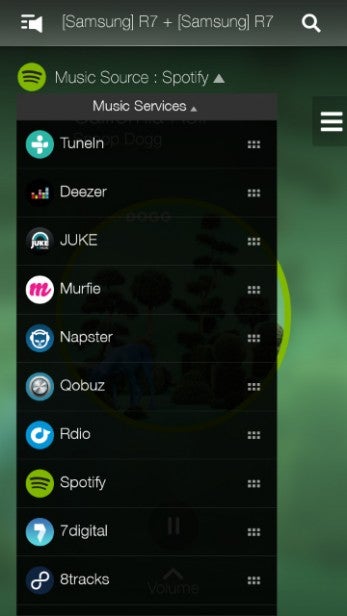 The smartphone app is a joy to use. It’s been revamped for 2015 and is far slicker and more sophisticated than the 2014 version. Sources are easier to select using the dropdown bar – you no longer have to jump between different menu pages. The clear, logical playlists make it easy to find the track you’re after, while the bold “now playing” screen is packed with information. The app also integrates seamlessly with music services such as Spotify, displaying cover art in a large circle. During our test, the soundbar streamed music smoothly and reliably. 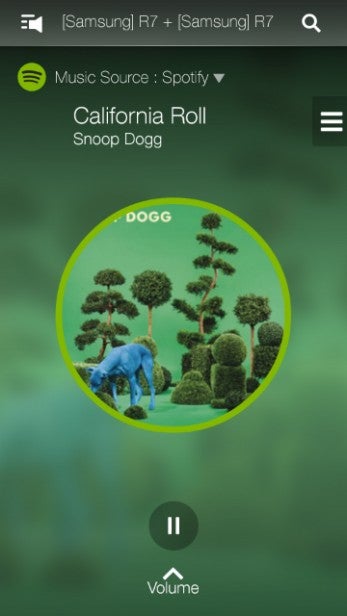 In terms of sound quality the HW-J6500 is a solid performer, belting out movies and TV shows with impressive volume and drive. With fewer drivers and inferior build quality, it isn’t quite up to the standards of the HW-J7500 and HW-J8500 – but it’s still an enjoyable listen.

Cycling through the sound modes, Standard and Cinema are best for movie viewing since they provide the best balance across the frequency range while keeping dialogue audible. That said, the subwoofer required a bit of tweaking to stop it booming. After reducing the level to -4, it sounded a lot more cohesive.

Once optimised, the Samsung starts to show off its talents. First, it reveals an excellent sense of scale – in Edge of Tomorrow, when Cage first drops onto the beach, the room is filled with beefy explosions and rumbling quadcopter engines. As the huge ships thunder over Tom Cruise’s head, the combination of weighty bass and authoritative mids gives you a convincing feel for their size and heft.

The Samsung’s typically crisp and attacking tone brings instant excitement. It revels in the explosions and splintering metal as J-Squad’s ship is ripped apart, while shots from shoulder-mounted machine guns are fiercely projected.

It’s a little too upfront for our taste – we like our movies handled with greater smoothness and finesse. Turn the volume up to around 80 per cent and we’re impressed by the lack of distortion, but after a while fatigue sets in. It starts to feel like being thrown in a metal bin while a bunch of kids bang the outside with sticks (and we speak from experience). The lesson here is to keep that volume level in check.

There’s a decent amount of detail, such as the gentle hiss of sand as the Mimic emerges from the sand and the top-end chink of gunshots, but it glosses over the finer textures you get from audiophile soundbars such as the DALI Kubik One and Q Acoustics M4.

Surround Sound Expansion adds subtle width to the stage, as missiles zip between the speakers and machine guns rattle in the distance. The lack of side-firing speakers means it’s narrower than the premium models, though.

Switch to TV and the Samsung’s forthright mid-range makes speech easy to hear, backed up by cohesive bass. It makes all the difference if you’re trying to watch a show while people are jabbering away in the same room.

The HW-J6500 also does a pleasing job with music via Bluetooth. We played a variety of albums including “Rising Son” by Takuya Kuroda and the Samsung handles the jazz trumpet lines with surprising polish, while the neck-nodding drums and funk basslines have good weight and timing. 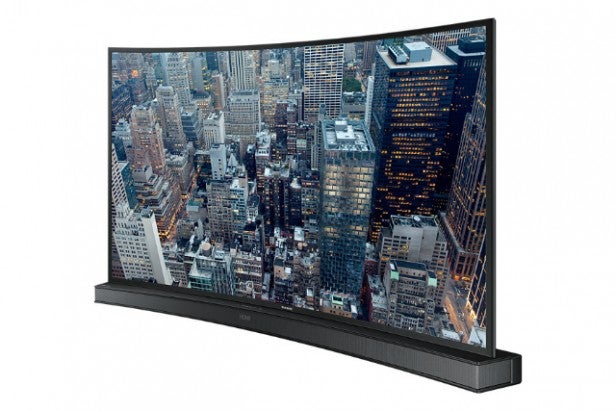 If you don’t own a 48in curved Samsung TV then there’s very little point in considering the HW-J6500. And even if you do, £600 is a lot to pay for a soundbar, curved or otherwise.

Thankfully, the HW-J6500 doesn’t leave you feeling short-changed thanks to its generous features, attractive design and exhilarating sound quality. When watching movies, the attacking tone and hefty bass provide a lively listening experience with a terrific sense of scale and decent detail. HDMI connections, multiroom support – with Samsung’s brilliant smartphone app – and a wireless subwoofer are the highlights of a full spec sheet.

Naturally, at this lower price point build quality and performance aren’t up to the same standard as the HW-J7500 and HW-J8500, while its aggressive sound takes its toll on the ears after a while. If you prefer a smoother, more considered sound try checking out “straight” soundbars from the likes of DALI and Q Acoustics.

The HW-J6500 is a solid soundbar for curved TV owners, boasting nifty features and in-yer-face sound, but its performance could do with a little more finesse to back up the firepower