The HW-H750 is Samsung’s latest premium soundbar, a low-key 4.1 audio solution that boosts TV and movie sonics without adding unwanted clutter to your living room.

Being the company’s range-topping model, it boasts several design and sound features not found on its cheaper models, not least the vacuum tube amplifier Samsung reserves for all its top-end audio gear. As a result it’s a lot more expensive than most soundbars, but we’re hoping the aesthetic and performance benefits make it a worthwhile investment. 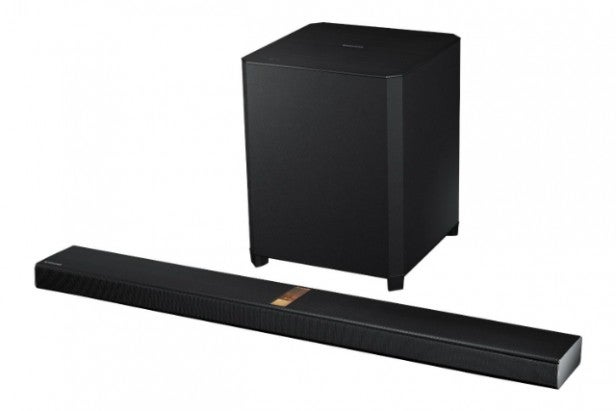 The HW-H750 looks identical to its predecessor, the HW-F750, but with such a chic design you can understand Samsung’s reluctance to change it. The soundbar is wrapped in a black mesh that curves alluringly along the edges, while the chrome end panels add a splash of glamour.

The £600 price tag is also reflected in the robust, hefty build quality – the aluminium mesh helps avoid the plastic fantastic feel you get from cheaper soundbars. 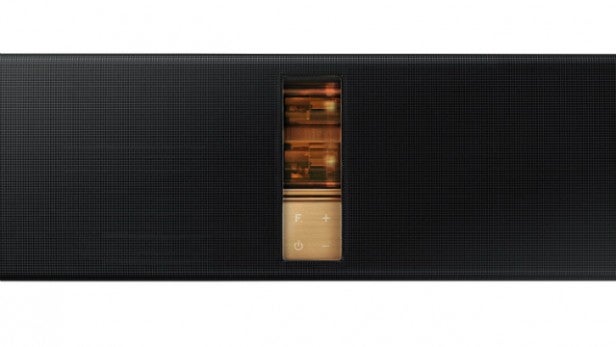 A window on top gives you a cheeky peek at the valve amps, whose orange glow looks undeniably cool – as does the panel of illuminated touch-sensitive controls below it. These allow you to control volume and switch inputs up close.

But here’s the really cool bit – the unit can be laid flat on a TV stand or mounted on the wall, and automatically detects which way up it’s installed. There are LED displays on two different sides of the unit, and it switches between them depending on its position.

If you lay it flat, the soundbar’s shallow 57mm height shouldn’t obstruct your TV screen. There are rubber pads on the bottom that tip the bar up slightly to help disperse sound into the room. For wall mounting, the brackets and guide template are supplied.

Sockets include an HDMI input and ARC-compatible output, which allow you to pass HD/3D signals from a Blu-ray deck through the soundbar, although 4K passthrough isn’t supported. Alternatively the output’s ARC support allows for a clean single-cable connection between TV and soundbar, as does the optical digital input. A USB port and 3.5mm input reside in a separate panel on the back, completing a very generous socketry line-up.

Interestingly, the HW-H750 sports an Ethernet port and built-in Wi-Fi – highly unusual for a soundbar. That means it can be used as part of a multiroom system alongside Samsung’s other network audio products (like the M7 wireless speaker and Hub). You can even use Samsung’s wireless speakers as rears in a 5.1 setup, with everything being controlled from Samsung’s Multiroom App for Android and iOS devices.

The sockets are located in a shallow recess on the bottom (or back, depending on how it’s installed), with a groove that allows the cables to poke out. 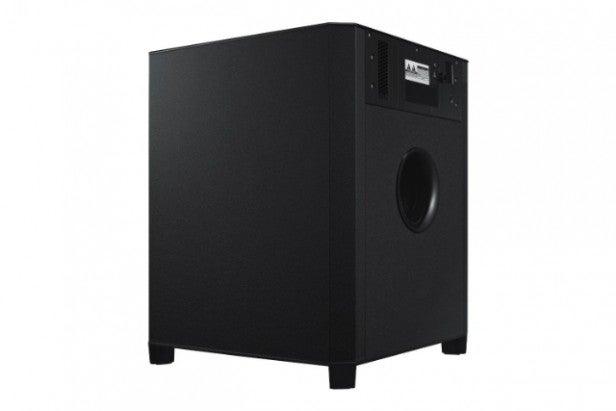 The subwoofer is fairly large (388mm high by 305mm wide) but thankfully it’s wireless so you can place it wherever you have space (although the nearer to the soundbar the better). Build quality is solid enough and there’s a reset button on the back in case the wireless link drops out. It’s styled in a discreet black finish and brush-effect top panel.

Naturally for a top-end soundbar, the feature list is comprehensive. Complementing the generous range of physical connections are built-in Wi-Fi and Bluetooth – on the Bluetooth side, NFC compatibility lets you pair compatible devices by tapping them on the soundbar, while SoundConnect allows you to beam audio from a compatible Samsung TV via Bluetooth. The system leaves very few connectivity stones unturned.

You can also play music from storage devices (FAT16/32 only) connected to the USB port, and there’s an impressive list of supported audio formats – MP3, WMA, AAC, AAC-LC, HE-AAC, WAV, OGG, ALAC and FLAC. It supports high-resolution files too, making this one of the best soundbars around for digital music playback.

You can experiment with the sound using a range of ‘Sound Effect’ presets – Standard, Cinema, Sports, Voice and Music – plus a Surround Sound Expansion mode courtesy of Sonic Emotion that looks to expand the depth and spaciousness of the soundstage. You can also adjust bass and treble levels (from -3 to 3) and tweak the subwoofer level (-6 to 6). 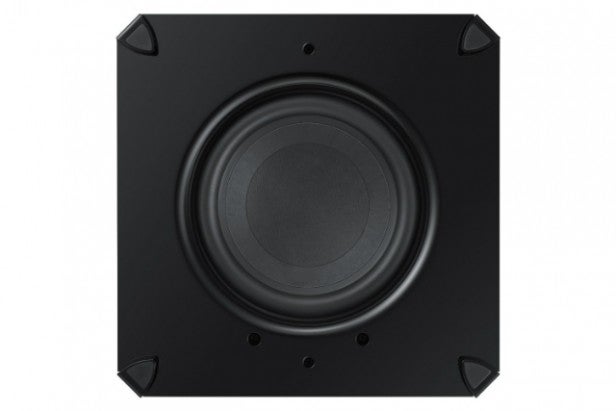 The system generates 320W of total power, according to Samsung, with 4 x 40W inside the soundbar and 160W from the sub. The subwoofer uses a ported enclosure with an 8in woofer.

We didn’t have any trouble setting up the HW-H750. There’s enough space in the socketry recess to comfortably connect the HDMI cables, plus Bluetooth and NFC work a treat and the subwoofer pairs instantly.

Using ARC with our UE55D8000 Samsung TV was a little more involved, as we had to activate HDMI-CEC in the TV’s setup menu and remember to select ‘D.IN’ rather than ‘HDMI’ as an input, but it’s hardly rocket science.

Wi-Fi setup is a cinch if your router supports WPS – just hit the button on the back. Similarly, the soundbar can be quickly and easily connected to Samsung’s network hub using the ‘Speaker Add’ button. Wired setup is carried out within the Multiroom App.

Day-to-day operation is a hassle-free experience. The LED display shows inputs and volume levels in large digits – which is much better than having to decipher flashing lights like some soundbars – while the remote’s ergonomic shape and sensible button arrangement makes navigation feel like second nature.

There are buttons for the main volume and the woofer level, basic Bluetooth playback controls and dedicated buttons for Sound Effect, Surround, Audio Sync, Treble/Bass and Dimmer. To select an input, you have to toggle through them using the Source button, and when adjusting the treble, bass or woofer levels, you have to press the skip forward/back keys. Alternatively you can control the system using the Samsung Multiroom App, which boasts a slick, intuitive interface.

Samsung’s previous soundbars have had their ups and downs in terms of audio performance, but thankfully the HW-H750 is an absolute belter.

Not only does it deliver a mighty soundstage when called for, turning movie playback into an enthralling, exciting experience, but it’s also warmer and easier on the ear than expected. Its ability to sidestep the harsh, nasal tone we’ve heard from other soundbars pays dividends when you crank up the volume, giving you all the excitement without the earache or fatigue.

With the soundbar rigged up via ARC and Rise of the Planet of the Apes in the Blu-ray deck, we were immediately blown away by the sound’s detail, depth and vigour.

The scene in which Bright Eyes breaks out of her cell and runs rampage around Gen-Sys HQ sounds pleasingly dynamic. When the ape bursts free, she slams the scientist into the door with a fierce crunch and clatters into a trolley as she runs down the corridor, demonstrating the Samsung’s attacking character and clear midrange.

The scene also highlights the Samsung’s crisp sonic character – as the ape bursts through the window, the tinkling glass is crystal clear, and when she knocks cutlery off the table it has a naturally metallic jangle. If you find it gets too bright then you can sort it out with the treble adjustment.

But perhaps the star of the show is the subwoofer. It’s surprisingly agile and impactful, lending decent slam to explosions and fight scenes. As the apes make their way across the Golden Gate Bridge, its weighty reproduction of the pounding score adds scale and drama.

It merges with the soundbar cohesively, bringing subtle depth to effects like car engines and footsteps. It also makes dialogue sound authoritative, and it stands out no matter how busy the scene gets. Its presence reinforces the sound throughout the film without pulling you out of the moment as some subs can do.

Have a play with the sound modes by all means, but we found Standard to be the most rewarding. The others either sound too compressed or not dynamic enough, but Standard seems to tick all the boxes. The surround mode opens up the stage nicely, both in terms of height and width, but pushes the treble a little too hard for our liking.

The HW-H750 makes a surprisingly impressive music player. Not only does it accept an unusually wide range of digital formats, but it also plays them with a smooth, enjoyable tone and teases out plenty of detail. Its energetic reproduction of uptempo tunes is a treat, bolstered by the nimble, well-integrated sub.

We didn’t have the extra Samsung speakers at the time of testing to investigate the multiroom functionality, but from our experience with the M7 speakers it works brilliantly and we can imagine the HW-H750 slotting into the system seamlessly. 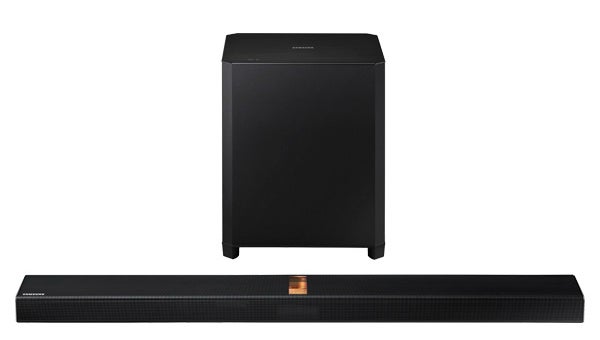 The HW-H750 is not a cheap audio solution by any stretch of the imagination, but if you have this sort of budget for a soundbar then it’s definitely money well spent.

That’s primarily due to its impressive sound quality, which is a cut above any budget soundbar – particularly in terms of top-end clarity and bass performance – but you also get your money’s worth from the feature list, which encompasses Bluetooth, multiroom functionality, NFC, valve amplification, HDMI ports and the best audio format support of any soundbar.

We’ll find out how it compares with high-end soundbars from the likes of KEF, Q Acoustics and Paradigm when we review them in the coming weeks, but for now the HW-H750 is one of the best premium soundbars around.

Samsung’s top-end soundbar delivers top-drawer sonics and a generous feature list, but the £600 price tag could be off-putting for the typical soundbar buyer.

Next, read our best soundbars round-up