The HW-H600 (or SoundStand to its friends) is Samsung’s debut soundbase – in other words, a speaker unit with a top surface strong enough to place your TV on it. This neat space-saving solution delivers a sound-quality upgrade without making you sacrifice any of your precious living-room space.

It’s a typically feature-rich affair, with plenty of sockets and sound modes to play with, but what really sets the HW-H600 apart from its rivals is its super-slim design. 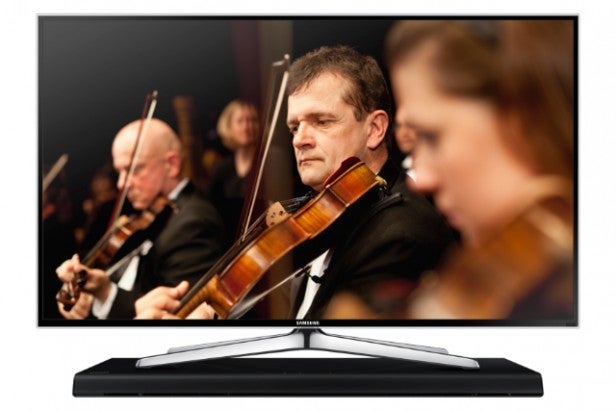 At 35mm high, the HW-H600 is the slimmest soundbase we’ve tested since the LG LAP340. That makes it remarkably discreet when placed under your TV – in fact, you hardly notice it’s there.

It’s one of the best-looking soundbases we’ve seen, too. The gorgeous all-black finish is sleek and contemporary, plus we love the way the brushed top surface curves into the sloping front panel. You can’t see any joins, just a single continuous panel. Underneath is a series of ports that disperse sound into the room, with lots of other funky curves and ridges on the sides.

The front LED readout shines through the front surface, continuing the clean, minimal theme. We like a good LED display on a soundbase, as it’s much easier to understand than a series of blinking lights. A few touch-sensitive controls are found on the top panel, enabling you to control volume, input selection and power.

We’re also impressed by the HW-H600’s build quality. Solid and heavy, it’ll easily support TVs up to 60in, as long as they’re less than 77lbs and fit within the top surface. We’d say the Canton DM50’s design is slightly more luxurious – some of the Samsung’s fittings are plasticky to the touch – but overall it’s an impressively constructed unit.

Soundbases are designed as a simple upgrade for TV speakers and therefore don’t need loads of sockets beyond a digital input, so the generous selection on the back is to Samsung’s credit.

As well as an optical digital input, there’s an HDMI v1.4 input and ARC-compatible output, which will happily pass through 3D signals, but not 4K. You also get a 3.5mm minijack and a USB port that enables you to play music files from flash drives, which is a rarity among soundbases.

The HW-H600 boasts four speakers and two built-in subwoofers, which means no extra speakers or cables to accommodate in your living room. On-board power is quoted at 80W, with separate amplifiers for the low, mid and high frequencies. According to Samsung, this results in more accurate sound across the spectrum.

There are Standard, Music, Voice, Sports and Cinema presets to play with, each tailored to suit different types of content. You’ll also find a Surround Sound Expansion mode that spreads the soundstage horizontally and vertically so that it appears to come from the TV screen.

Bluetooth is built-in, but fans of NFC will need to step up to the HW-H610. Samsung’s TV Sound Connect uses the Bluetooth connection to beam sound from a compatible TV to the soundbase, giving you a completely wireless connection. There’s even a Bluetooth power on function, which allows you to turn the soundbase on using a smartphone.

Shove a music-filled USB stick into the rear port and you can enjoy a wide range of audio formats, including MP3, WMA, FLAC, AAC, WAV and OGG. There are on-board decoders for Dolby Digital and DTS, too.

Setup is a breeze – just plonk the TV on top, connect your HDMI or optical cables and away you go. Operation is similarly easy, thanks to the legible front display and the superb remote. Many soundbases include a poky blister-button remote, but Samsung has gone for a bigger zapper with chunky rubber buttons labelled in big capital letters.

It’s a joy to use. There are buttons for both the main and subwoofer volumes, dedicated keys for surround/sound effect modes and even lip-sync adjustments. You toggle through inputs by repeatedly pressing the Source button.

The front LED displays the currently selected input when idle, plus the sound mode and volume level when changed. It scrolls across to reveal long names.

The HW-H600 delivers a surprisingly loud and fulsome sound for such a slim unit, evoking a sense of size and depth that you simply don’t get from any built-in TV speakers. Movies sound bigger and more involving, thanks to the impressive bass output that floods into the room and adds weight to raucous action scenes.

With Pacific Rim on Blu-ray – a rigorous workout for any speaker system – there’s a heavy thump every time a Jaeger or Kaiju lands a blow on its foe, while the roaring ocean and stomping footsteps are accompanied by a beefy yet tightly-integrated rumble.

Predictably, the built-in subwoofers lack the slam you get from a good quality external subwoofer – bass notes don’t stop and start with the same alacrity and there’s some overhang – but getting bass this big from a speaker that’s thinner than a Blu-ray player is quite an achievement. Just make sure you adjust the woofer level judiciously as it can sound too thick when pushed too high.

The HW-H600 also sounds crisp and dynamic – exploding buildings, shattering glass and clanking metal are conveyed with enough bite to keep the excitement levels high. But as we found with LG’s LAP340, midrange frequencies can sound hard, particularly at high volumes. When a monster shrieks loudly, or when a Jaeger pulls out a blade, the effects have a steely edge that doesn’t always sit comfortably on the ear.

Much of this is down to the Samsung’s characteristically bright sound, which conveys excitement easily but can stray into harshness if the volume is pushed too high.

The HW-H600’s other drawback is its relative lack of openness and detail clarity compared with the best soundbases. Canton’s DM50, for example, takes a proper hi-fi approach with separate woofers, midrange drivers and tweeters, resulting in a wider frequency range, silkier high frequencies and punchier bass.

Then again, the DM50 is almost twice the height of the HW-H600, so the difference in quality is perhaps inevitable. What’s more, the Canton costs more than the Samsung, so it’s a case of getting what you pay for – we make the comparison merely to illustrate the sort of upgrade you can get with a bigger budget.

The SoundStand also relies heavily on Surround Sound Expansion to give everything a boost. Without it, we sometimes struggled to hear dialogue and found the overall output a little flat, no matter which Sound Effect mode was selected.

However, once Surround is engaged everything becomes fuller, clearer and more open – although ‘Surround Sound’ is a misnomer, as the sound stays at the front of the room. You definitely shouldn’t listen to movies without it. There isn’t much difference between the Sound Effect presets, although the weedy Voice setting should probably be avoided.

The HW-H600 is much better suited to less demanding TV programmes than movies, bringing them to life with deep bass and loud volume. You suddenly hear your favourite shows in a different light, bulking up the blasts of music between rounds on a game show or the ‘pop’ of a commentator’s mic during football matches. The roar of the crowd is bigger too, with a subtle layer of bass beneath it. If you watch a lot of TV, Samsung’s soundbase won’t disappoint.

And provided you manage your expectations, the HW-H600 also serves as a decent music player. Songs beamed via Bluetooth have a satisfying overall balance and audible detail, although again there’s a lack of refinement that won’t satisfy discerning listeners. 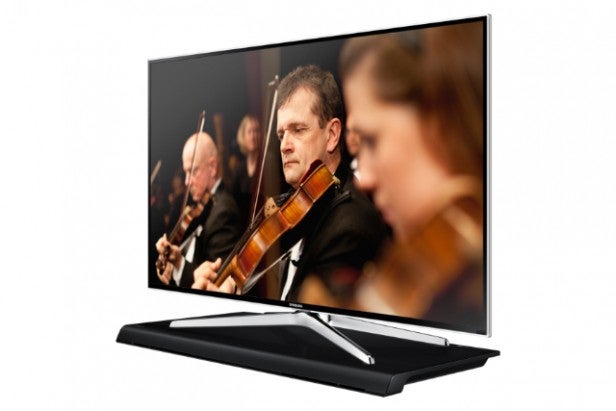 The HW-H600 is an impressive audio solution with a generous range of features, enjoyable performance and a super-slim design that keeps clutter to an absolute minimum. You can now find it online for under £200, which is an absolute steal for such a talented soundbase.

In terms of performance, the HW-H600 musters surprisingly fulsome bass for its svelte dimensions, coupled with lively, engaging mids and highs. It sounds a bit brash at times and lacks the power and refinement you get from a pricier ‘hi-fi’ soundbase like the Canton DM50, but given its lower price and slimmer dimensions we think the HW-H600 makes a very good account of itself.

In fact, there aren’t many soundbases at this price that look and sound this good while offering such plentiful features – only the Sony HT-XT1 comes close, but we think the Samsung sounds better.

Not the best performer on the market, but Samsung’s debut soundbase delivers surprisingly fulsome sound and plenty of features for a tempting price.