It’s a cheaper version of the Samsung HW-F751 soundbar we reviewed earlier this year, offering full-fat home cinema sound from a skinny speaker unit and wireless active subwoofer. Like its step-up sibling, it’s a 2.1-channel system that will blend discreetly into its surroundings, whether you mount it on the wall or place it in front of your TV. But as the more affordable model you miss out on the HW-F751’s automatic calibration and valve amp technology. Can it match the best soundbars? 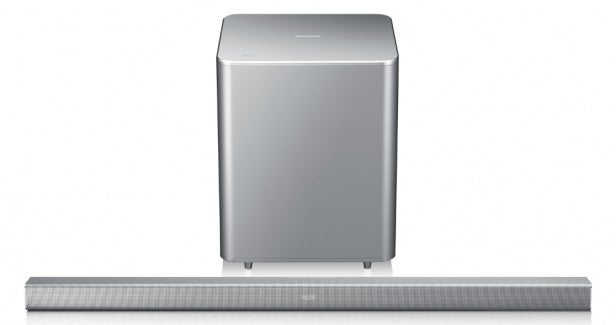 The soundbar itself is stunning. Wrapped from end-to-end in a silver mesh, it exudes 21st century style and at just 55mm high it’s one of the slimmest soundbars around. There are some other beautiful touches, such as mirrored panels at both ends, curved edges and a small panel of touch-sensitive buttons on top that allows you to control volume and source selection. There’s also an LED display behind the mesh on the front, which scrolls to reveal the names of inputs and changing volume levels. 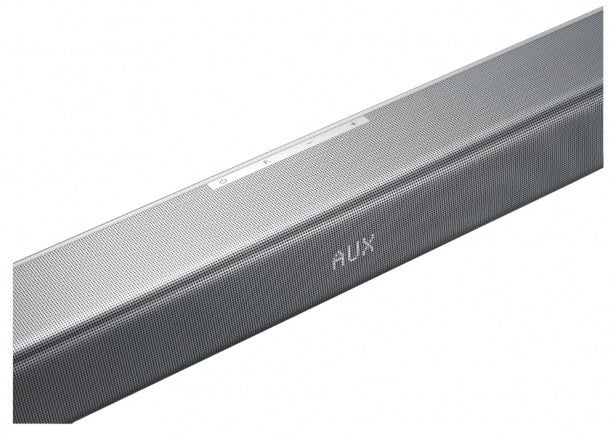 Because it’s fashioned from metal, it’s satisfyingly heavy and robust. The bar measures 943mm wide, making it best suited to 46in TVs, and because it’s half as deep as the HW-F751 it should be even easier to accommodate. On the downside it lacks the HW-F751’s installation position sensor and obviously the window showing the valve amp at work.

The subwoofer isn’t quite up to the same standard, but is still a stylish and well-made unit. The glossy grey finish, matt plastic top panel curved corners are a nice combination, making this a sub you can be proud to have out on display. There are no controls on the sub itself on account of it being wireless – everything is controlled using the soundbar’s remote. 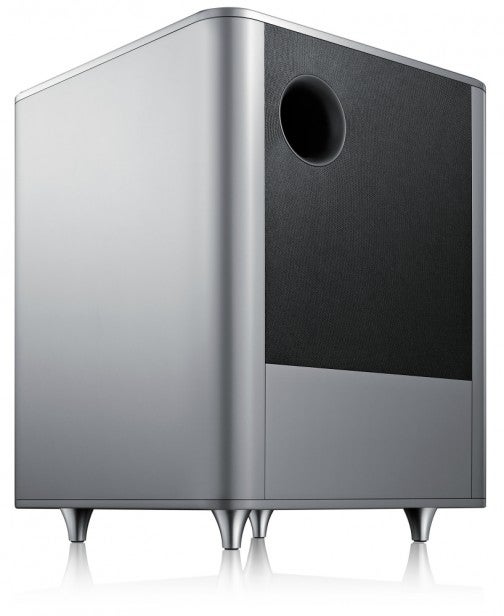 On the back of the soundbar is a modest array of sockets, which is understandable given its size. There’s a single HDMI input that lets you pass sound from a Blu-ray player or TV receiver to the system (though sadly there’s no pass-through while in standby) plus an ARC-compatible output that can play audio signals directly from a TV and lets you control volume with your TV remote.

For other devices you get optical digital and 3.5mm minijack inputs, plus a USB port for playback of music files from flash drives.

The sockets are housed in two separate and rather cramped recesses, with the HDMI input/minijack facing one way and HDMI out/optical input facing the other. As a result, cables sticking out in different directions could cause a minor headache when wall mounting, but it’s not an insurmountable problem.

The USB port is located separately from the others, and to make life easier when wall mounted Samsung supplies an angled USB adapter.

The HW-F551 lacks the automatic calibration and valve amp technology found on the HW-F751, but in every other respect it’s identical.

Among its key features are Bluetooth and Sound Share support, the latter allowing you to send audio from a compatible Samsung TV to the soundbar. Bluetooth is always welcome as it makes wireless music playback a cinch.

You also get Samsung’s proprietary 3D Sound Plus, designed to add depth and spaciousness to the soundstage, plus six of DSP modes under the Sound Effect umbrella – Music, News, Drama, Cinema, Sports and Game – but you can turn them off if you prefer.

Samsung quotes the total power output from its Crystal Amplifier Pro as 310W – in other words 80W per channel and 150W from the subwoofer.

Next
Ease of Use, Performance and Verdict Review