Everyone knows that a full surround sound system is the best way to enjoy home cinema, but we also know that it’s not always practical to fit all those boxes in your living room. It can be a space-hogging, cable-intensive enterprise, likely to cause you as much grief as it will for your sceptical spouse. If that’s the case then all is not lost – Samsung has created this stylish ‘Surround AirTrack’ soundbar system in the Samsung HW-E551, which aims to get you as close to the true home cinema experience as possible without loads of speakers cluttering up the place.

Samsung HW-E551 soundbar not for you? Check out our round-up of the best soundbars to buy 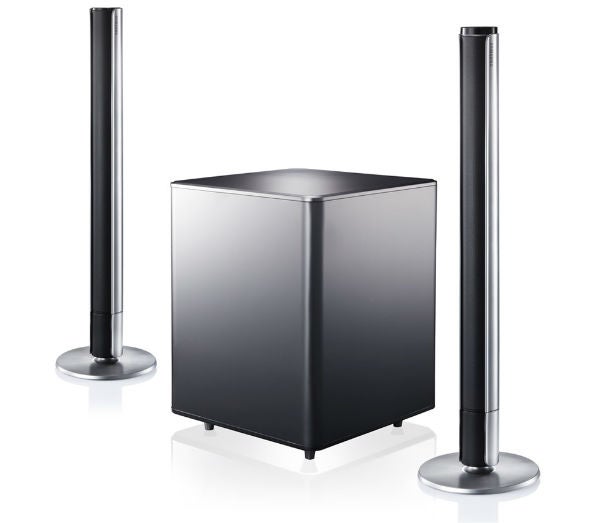 Some soundbars are nothing more than powered speakers that take an analogue stereo feed from your TV and little else – this one is a much more sophisticated proposition. The actual soundbar, for instance, can be used in the regular way, placed horizontally on a TV stand or mounted on the wall as one long bar. But you can also split it into two pieces and place them vertically on the supplied stands, giving you some very welcome flexibility when it comes to installation.

The other thing that sets the Samsung HW-E551 apart from many soundbars is that all the connections are found on the active subwoofer, which beams audio signals to the soundbar wirelessly. Again, that gives you a great deal of flexibility when it comes to placement, and cuts the amount of cables going into the soundbar down to one (the power lead).

Design
And if that wasn’t enough to catch your attention, how about its super-gorgeous design? Samsung has shelved the gloss black and opted for a beautiful silver finish on both the soundbar and subwoofer. The soundbar rocks an unusual cylindrical shape, and when the two halves are joined it measures 1088mm wide, which makes it best-suited to TVs with a 46in screen size. 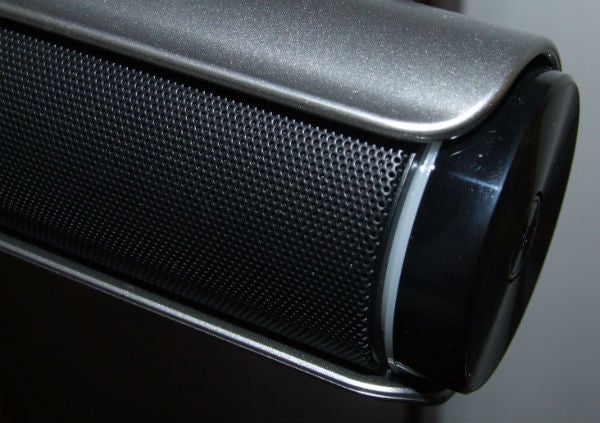 At the front of the main soundbar is a black mesh running the entire width, while in the middle is an LED display that shows various words in large dot-matrix letters. By default it shows the currently selected input, but also displays the volume level, sound modes and other key info. On one end of the unit is a volume dial, with a power switch embedded into it. Not only is it a solidly built and attractive unit, but its thin cylindrical shape will make it a cinch to wall mount and looks fairly discreet once it’s there. The subwoofer, meanwhile, is dressed from head to toe in silver, giving it serious living room appeal, and it’s compact enough to tuck away in a corner.

Connections
The good news continues when you eye up the rear panel – there are two HDMI inputs, allowing you feed two other sources to the HW-E551, and pass any video signals to your TV using the HDMI output. Two more sound sources can be connected to the optical digital audio input and the 3.5mm minijack input, while a USB port allows you to play MP3 and WMA files from flash memory devices. In the box is a USB extension cable that makes it easier to connect devices if the sub is hard to reach.

Setup
If you want to install the soundbar as a single unit, the two halves slot into each other, forming a connection that sends the audio signal from the powered half of the bar to the passive half. The power adapter connects to the back of the right-hand section. And if you’re putting it on a flat surface such as a TV stand, there’s a curved cradle that screws onto the back and provides a sturdy base. If you’re wall mounting it, all the brackets and fixings are supplied in the box. 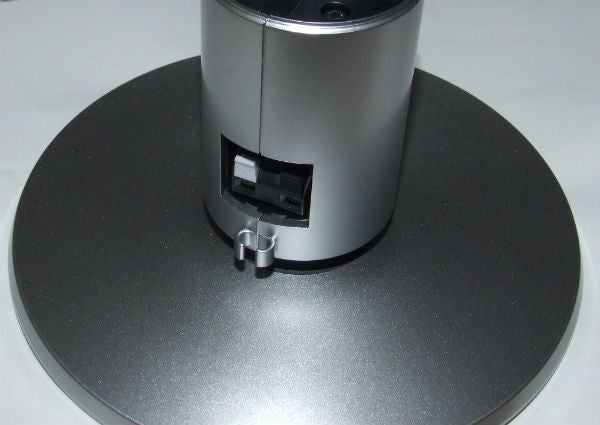 Alternatively, when installing the two halves as two separate speakers there’s a two-part base for each section – one part is a short cylinder with springclip speaker terminals, which need to be linked up using the supplied speaker cable. This slots into a large round silver base, and when installed in this way they look great, a breath of fresh air from all the big boxy speakers that usually come with 2.1 systems. One that’s all in place and all your devices are connected to the sub, you’re ready to rock – the sub and soundbar pair up automatically, but if not there’s a button on the back of the sub to reset the connection.

Features
So far we’re highly impressed by the HW-E551’s flexibility and style, but our admiration continues with a look at the feature list. One particularly eye-catching feature is its Bluetooth compatibility, which provides yet another way of listening to your music. It’s quick and easy to pair devices and we love the way the device’s name flashes across the soundbar display in massive letters.

The Samsung HW-E551 also comes loaded with a range of sound modes for different types of material. There’s Music, News, Drama, Cinema, Sports and Game, each EQ’d to suit the genre in question. Not impressed? Select the Off mode. You’ll also find 3D Sound with Low and High settings, which are thrown in to make up for the lack of rear speakers. It’s supposed to widen the sound and create a more immersive soundstage. Smart Volume is on hand to automatically keep the volume consistent when listening to content with varying levels.

What’s more, the system also comes equipped with Dolby Digital and DTS decoders, allowing you to hook up your Blu-ray, DVD player or digital TV receiver to the sub and get discrete 2.1-channel sound. This is a welcome feature, since most soundbars limit you to downmixed stereo, yet we can’t help feel a little miffed that it’s not Dolby True HD or DTS HD Master Audio. Sure, there’d be no 5.1/7.1 sound anyway, but you’d still feel the benefits of the extra resolution with a Blu-ray deck hooked up to the HDMI port.

Also disappointing is the limited music format support. It’ll play MP3 and WMA, but FLAC, WAV and AAC are off the agenda. Samsung says there’s a decent amount of welly in the tank – 2 x 80W within the soundbar unit (although that’s into 3Ω) and 150W from the subwoofer (310W in total).

Operation
The Samsung HW-E551 is operated with a stumpy little remote that sits comfortably in the hand. The buttons are nicely spaced out and clearly labelled. It appears to provide dedicated keys for every single function, including subwoofer volume controls, 3D Sound, DRC and even audio sync. It even doubles up as a remote for Samsung TVs, hence the bevy of buttons at the bottom preceded by the word ‘TV’.

Performance
We fired up the Samsung HW-E551 with slight trepidation after the slight disappointment of the HT-E6500W system, which suffered some harshness at loud volumes, but strangely the HW-E551 is a more satisfying listen, even without the added warmth of the vacuum tube amp. Its sound is surprisingly smooth and silky, taking a busy, belligerent soundtrack like Rise of the Planet of the Apes and turning it into something deeply enjoyable.

The main reason is that it avoids the thin, treble-heavy sound you get from some soundbars. There’s a lovely balance and richness as the ape runs riot around the Gen-Sys labs, thanks in no small part to the sub, which injects tightly integrated bass into the mix as it thumps about, without overdoing it. As it smashes through the glass onto the boardroom table, the effects are certainly crisp and realistic but not overly strident, topped off by solid, forceful shots from the security guards’ pistols. 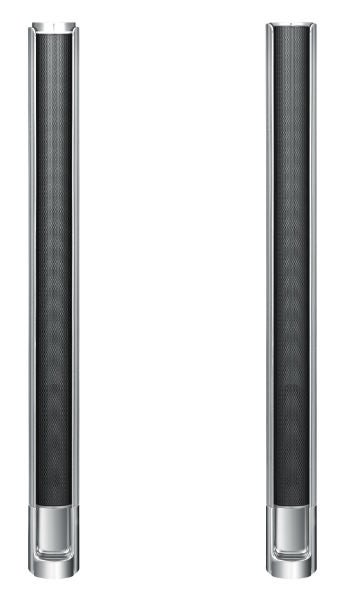 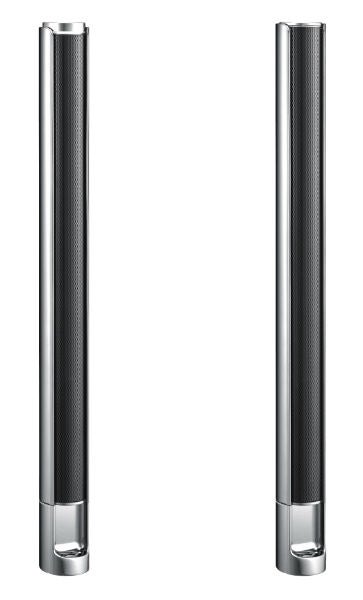 The 3D Sound mode certainly increases the scope and width of the stereo soundstage, making it fuller and a touch more dramatic, but ‘3D’ it is not. Inevitably you lose the enveloping feel of real surround speakers and the added sparkle of the HD audio formats, but on the whole it’s a richly rewarding sound that will prove a godsend for anyone getting tired of their flatpanel TV speakers.

And that good work continues when playing back music. There’s greater poise and coherence to its performance than we expected from a soundbar, with sweet high-frequencies plus warmth and punch in the lows and mids. It won’t challenge a decent hi-fi separates system but for day-to-day music playback it more than hits the spot.

Verdict
The Samsung HW-E551 is an impressive soundbar system that gets it right on many levels. The split soundbar design is a genius touch, appealing to those who want a traditional two-speaker setup as well as people who like the idea of a single wall-mountable unit. The wireless sub, with its array of useful inputs and compact dimensions, is hugely convenient, while on the aesthetic front the silver finish makes it one of the best-looking soundbars around.

Its feature list is fairly generous too, throwing in Dolby Digital/DTS decoding, Bluetooth support, media playback via USB and a decent pool of sound modes. The only criticism is the lack of Dolby True HD and DTS HD Master Audio decoding, which would have made it more relevant in the age of Blu-ray.

But the most impressive thing about the HW-E551 is its sound quality, which boasts surprising levels of depth and smoothness for a soundbar, making it a fantastic option if you really can’t stretch to a proper surround sound system.