Soundbars like the Samsung HT-E8200, with its built-in Blu-ray player and smart TV features, are a fantastic solution if you’re starting your home cinema system from scratch. But if you already own a Blu-ray deck and simply want to upgrade your sound system, then the Samsung HW-E450 might be a more appropriate choice. It’s a 2.1-channel ‘Surround Air Track’, with a slender wall-mountable speaker bar and a wireless subwoofer. There are HDMI and audio connections for your other components and built-in Bluetooth for wireless music streaming. 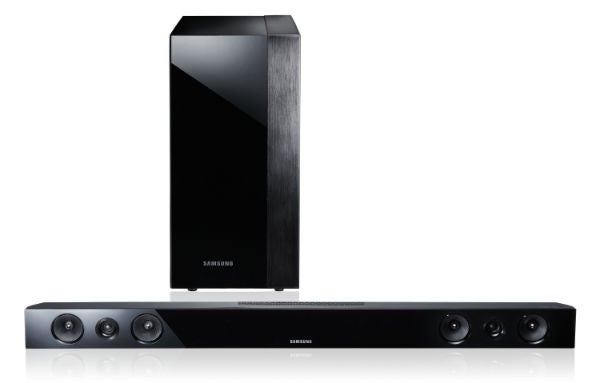 The Samsung HW-E450 is designed as a space-saving system, and as such the two compact components should slip into your living room discreetly. The soundbar measures just 70mm deep, so won’t look bulky when mounted on the wall, while the subwoofer’s 175mm width lets you slip it into narrow(ish) spaces beside the sofa or the TV – and because it’s wireless, there are no cables to worry about. Result. 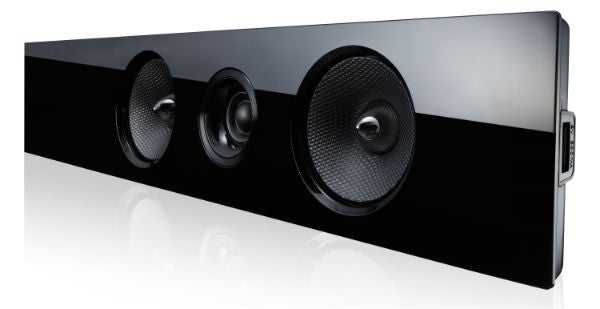 What’s more, both components are gorgeously styled in gloss black, which is always a winner. The soundbar’s flat front panel is clean and minimally styled, with an LED display in the centre and speaker drivers (two midrange drivers and a tweeter per channel) embedded at each end. It’s quietly stylish in a way that won’t draw attention away from the TV. 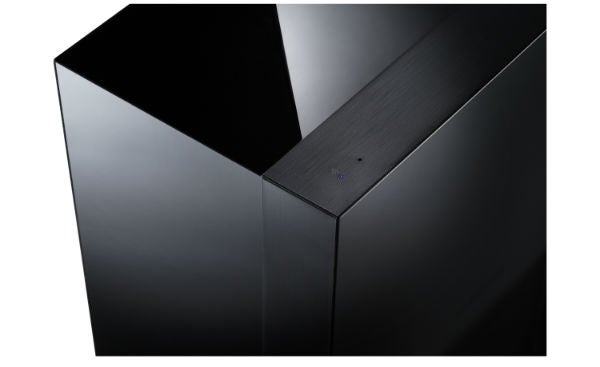 On the back of the soundbar are two recesses for sockets. One houses an HDMI input and output, which allows you to pass audio and video signals through the system to your TV, offering support for both 3D and ARC. The sockets are sideways facing, which means the cables don’t get in the way when it’s wall mounted, but the recess is rather small and it can be tricky to plug in the connectors. Our Peerless cable has a chunky plug on the end and it took a bit of manual dexterity to bend it in properly. 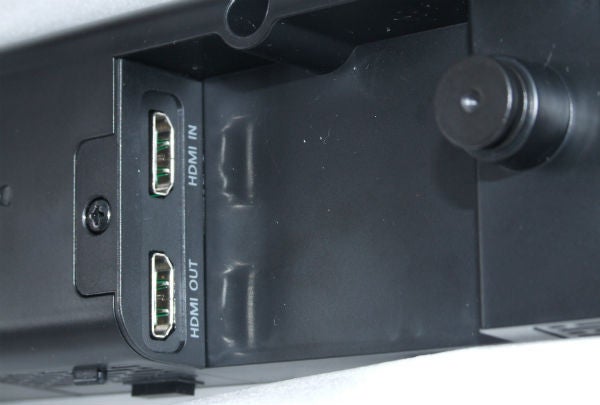 The other recess houses optical digital and 3.5mm minijack inputs. On the far right edge you’ll find a USB port for media playback, as well as power, input selection and volume controls.

Obviously, like any 2.1-channel system there are no physical rear speakers, so the Samsung HW-E450 relies on virtual surround processing to evoke a sense of surround immersion. Soundbars that pull this off successfully are few and far between, but even if it can’t replicate proper surround sound the extra width usually makes for a more open and involving soundstage.

Virtual Surround is backed up by 3D Sound Plus, a processing mode designed to add vertical and horizontal depth to 3D movie soundtracks. A range of sound presets tweak the EQ to suit different types of material, including Music, News, Drama, Cinema, Sports and Game, as well as an Off setting. Smart Volume maintains a consistent level when you switch between sources.

The built-in Bluetooth lets you stream music from smartphones and the like. Alternatively you can load music onto a flash drive device and play it via the HW-E450’s USB input. Sadly the range of supported formats is limited to MP3 and WMA – no FLAC, WAV or AAC – and with no onscreen display there’s no easy way to select specific tracks. 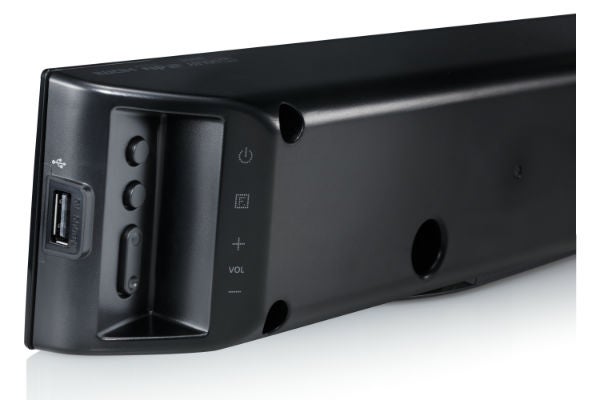 The system’s Crystal Amplifier Plus offers a total claimed power output of 280W, with 80W for each channel and 120W from the sub. The Samsung HW-E450 features Dolby Digital and DTS decoding, but not Dolby True HD or DTS HD Master Audio, which is a pity given that Blu-ray discs will be its most regular diet.

The Samsung HW-E450 soundbar can be wall mounted using the supplied bracket in the box, or you can place it on a TV stand thanks to the rubber pads on the flat underside. Once in place, setting it up is a piece of cake. The soundbar and sub pair automatically, and you can tweak the subwoofer level using the dedicated controls on the remote. There are also controls for the Audio Delay to correct lip sync problems (up to 300ms) and the main volume.

The remote is small and stumpy, but its shape allows it to fit snugly in the hand. The direction and playback keys are conveniently placed, but the volume buttons get a bit buried in the clutter and the lettering is quite small. Still, not a bad effort.

You can toggle through sources and sound presets using the Source and Sound Effect buttons on the remote – the front panel displays the name of the selected input or sound mode.

To test the Samsung HW-E450’s audio chops we loaded up The Lord of the Rings: The Two Towers on Blu-ray, and were highly impressed by its talents. The sound is rich and hearty, delivering sound on a much larger scale than any flat TV could muster but with a satisfying level of poise and control. 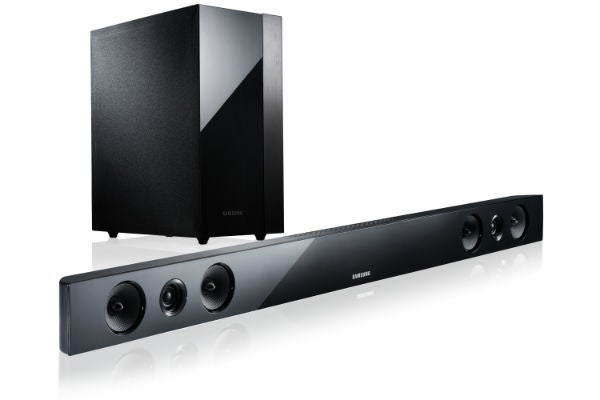 The Battle of Helm’s Deep provides a terrific showcase for the Samsung’s skills. The orchestral score drives along urgently, arrows whizz by the camera with a crisp ‘swish’, swords clank against each other cleanly without any harshness and the Orcs’ roaring battle cries have a menacing rasp. It’s stirring stuff.

What’s more, dialogue cuts through the melee of battle and despite the lack of HD audio decoding, high-frequency detail presentation is generally clean and crisp. Select the 3D Sound mode (available in Low and High settings) and the soundstage feels fuller, but you lose detail clarity. The sound presets are less than ideal – we preferred to turn them off. 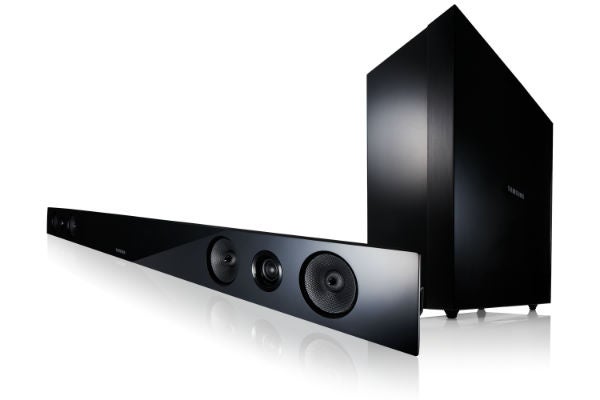 The subwoofer also does a better job than expected, provided you use the volume judiciously – anything above 1 starts to sound bloated. Transient bass notes are reasonably quick and punchy, and it adds convincing depth to Treebeard’s rich voice. In Chapter 41 when the Deeping Wall is breached by a suicide Orc, the explosion is deep and powerful but doesn’t outstay its welcome.

The Samsung HW-E450’s greatest weakness is that its virtual surround processing and 3D sound fail to live up to Samsung’s enthusiastic claims – there’s no sense of surround envelopment at all, although the stereo soundstage is pleasingly wide.

Music sounds great through the Samsung HW-E450, reproduced with a fluid balance between the low, mid and high frequencies. The sub is surprisingly agile, keeping funky live basslines tight and on tempo, while the crisp hi-hats and smooth vocals top it off nicely.

Anyone seeking to upgrade from their TV speakers without committing to a full 5.1 system would do well to consider the Samsung HW-E450. It looks striking, with a slim, compact design that’ll make a minimal impact on your living space. It lacks HD audio decoding, but there are some nice features like USB music playback and Bluetooth streaming to make up for it. The best part, however, is that it delivers a rich, room-filling sound with great composure and solid bass from the impressive wireless sub.