Most people love the idea of installing a home cinema system in their living room but not everyone can easily incorporate a full surround system. With five satellite speakers, a network of cables and a bulky sub to squeeze in, it can be difficult to find space for it all, particularly with a clutter-hating other half to appease.

Samsung HW-C450 soundbar not for you? Check out our round up of the best soundbars to buy


That’s where Samsung’s HW-C450 comes in. It’s a 2.1-channel system that aims to deliver a convincing home cinema experience from a discreet wall-mountable soundbar and a wireless powered subwoofer. It is not, however, an ‘all-in-one’ system per se, as there’s no built-in Blu-ray or DVD player – it’s a speakers-only solution for those who already own a player but are fed up listening to it through their TV’s weedy speakers.


Samsung doesn’t make ugly-looking products, and the HW-C450 is no exception. Its discreet, minimal design is stunning – the soundbar section is alluringly slim, measuring 92mm tall and 957mm long, while its shallow 45mm depth means it won’t stick out further than your TV when wall-mounted. Naturally the front of the soundbar is styled in a gloss-black finish, with exposed speaker cones lined up at either end. Along the top edge is a transparent plastic trim that houses the dot-matrix display panel and a row of illuminated touch-sensitive controls that govern volume, input selection and sound modes.

On the back of the soundbar are a limited number of sockets, which is hardly surprising for a product designed to keep clutter to a minimum. They’re tucked away in a cavity on the rear with a downward-facing hole that allows you to feed the cables to your kit without making it tricky to wall-mount.


They include two optical digital audio inputs, which is enough to accommodate a disc player and digital TV box for example, but you’re in trouble if you want to plug in a games console too. There’s an analogue minijack input that might come in handy if you want to listen to your MP3 player through the speakers. You’ll also find a USB port that allows you to update the unit’s software.


The subwoofer’s design is similarly sleek and minimal. It’s a gloss-black box measuring 175(w) x 350(h) x 295(d) mm, and because it’s wireless you can place it anywhere in the room, regardless of where the soundbar is installed. There are no sockets or controls on the back, everything is governed by the soundbar.

Looking at the connections and spec sheet, it’s clear that the HW-C450 was not designed with Blu-ray in mind. For starters it can’t decode any of the HD audio formats such as Dolby True HD and DTS HD Master Audio, and there are no HDMI inputs to support them anyway. It can, however, decode Dolby Digital and DTS, so at least it’ll play ‘standard def’ sound from Blu-ray decks.


The highlight on the feature list is the range of six sound modes, designed to suit different types of material. Most useful for film fans is the Cinema mode, which attempts to add an extra sense of spaciousness. For TV viewing you get Drama, Sports and News modes, plus there are Game, Music and Pass modes, the latter catering for those who prefer their sound straight.

There’s a couple of other audio features, such as Smart Volume, which keeps sound at a consistent level to account for fluctuations between programmes and scenes, plus Dynamic Range Control for late-night listening.


Given the simple nature of the product, there’s very little installation and setup involved. The subwoofer connects automatically with the soundbar (a little blue light indicates a connection has been made) and once rigged up the only speaker configuration you need to worry about is the subwoofer level – settings range from -6 up to +6. If there are lip sync problems, the AV Sync mode allows you to set a delay of up to 300ms.


Controlling the HW-C450 is easy thanks to the small, ergonomically-shaped handset. Buttons are kept to a minimum, but only the lower cluster of 12 keys relate to the system itself – the rest let you control a Samsung TV. The buttons are clearly labelled, and the different sections are separated by different colours.

Despite its slim dimensions and modest power rating of 280W, the HW-C450 musters a surprisingly rich and powerful sound. The Dolby Digital soundtrack on the Jurassic Park DVD is reproduced with impressive energy, drive and clarity, the likes of which no flatpanel TV could ever hope to muster.


There’s a pleasing crispness to the high-frequencies that allows detail and sonic textures to shine through, making Isla Nublar seem wonderfully atmospheric – the hiss of driving rain and the rustle of bushes are clear, while the sound of loud, screeching dinosaurs is conveyed without making your toes curl. 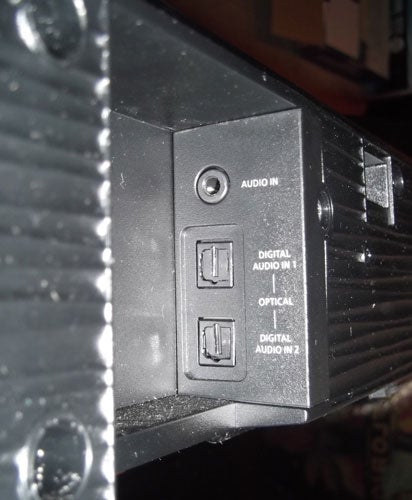 Also key to the system’s success is the subwoofer, which delivers tighter, deeper bass than you might expect. It’s subtle, responsive and doesn’t swamp the soundstage like most passive budget subs do. That’s probably helped by the fact that it has its own power source and built-in 120W amplifier. As a result it brings tension and menace to the T-Rex’s iconic introduction – its thumping, water-rippling footsteps have punch and power, and its low growl is incredibly deep.


We’re also impressed by the width afforded by the virtual surround technology. It’s no match for real surround speakers, but as Dennis Nedry makes his escape through the driving rain you’re almost convinced that sound is coming from either side of you. Later, the herd of Gallimimus sweeps past the camera and the sound moves from one side to the other. 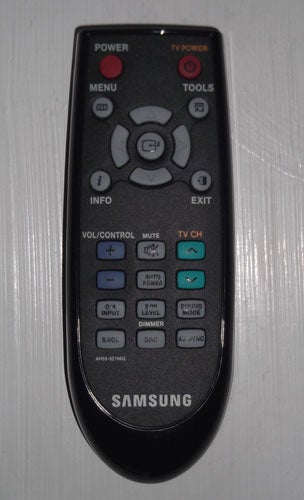 Speech is consistently clear and the brass and strings that permeate John Williams’ majestic score sound rich and smooth, boasting genuine warmth at the bottom end. That warmth and fluidity can also be heard during CD playback, making this a safe choice if you love music as much as movies.


With Blu-ray players steadily replacing DVD decks as the disc spinner of choice in UK homes, the lack of Dolby True HD and DTS HD Master Audio decoding means we can’t give the HW-C450 our wholehearted recommendation. An extra digital audio input wouldn’t have gone amiss either. But if you’re happy to settle for Dolby Digital and DTS, then the Samsung is an impressive proposition offering terrific sound quality and a discreet, stylish design. For under £200, you can’t say fairer than that.