One of the best pieces of advice you’ll ever hear in life is ‘keep it simple’, and Samsung obviously had this mantra in mind when it designed the HT-X810R. This blissfully straightforward 2.1-channel system does away with all the general mucking about that usually comes with setting up home cinema kit, allowing you to get on with the much more appealing business of watching films.

The main reason for the system’s simplicity is that it only consists of two components. There’s a main unit that combines a DVD/CD player, receiver and front speakers, and its long shape makes it look very much like a soundbar. It’s an elegant-looking unit with a sleek gloss-black finish (in keeping with the rest of Samsung’s home cinema range) and it can be wall-mounted using the bracket in the box. It’s also adorned with some typically tasty touches, such as the disc slot hidden behind a motorised flap and the same touch-sensitive buttons found on the DVD-F1080 DVD player. 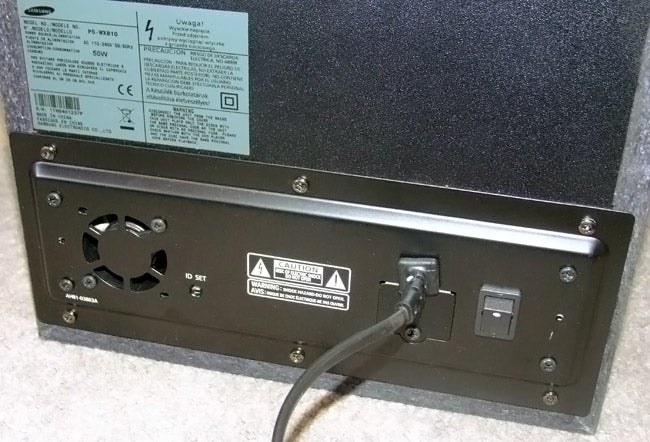 Also in the box is a wireless subwoofer, which will go down very well with cable-phobes and means you don’t necessarily need to place the sub near the main unit – good news if you want to wall-mount it. It operates on a frequency of 5.8GHz with a transmission distance of about 10m, but because it’s powered you‘ll need to locate it near a mains socket. This sideways-firing sub is also styled in gloss black and bears the budget hallmarks (chipboard cabinet and plasticky exterior) but it’s pretty enough not to cause offence if it’s on display – and because there’s nothing on the back except an on/off switch and an ID setting button, it’s quick and easy to install. 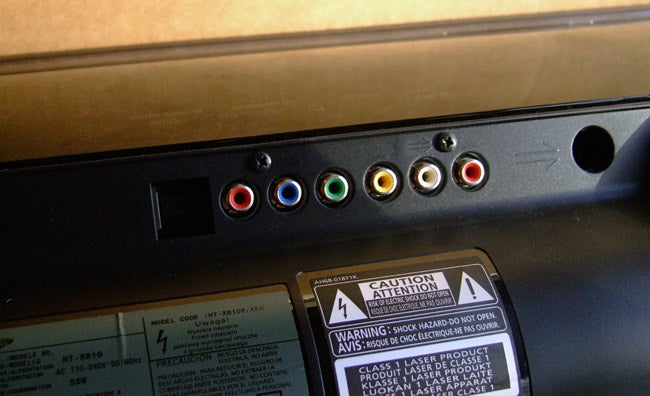 The main unit’s array of sockets is more generous than we expected. The system is designed to accompany a flatpanel TV (it looks great mounted underneath one) so naturally there’s an HDMI output with full 1080p upscaling capability to back it up. On a separate panel towards the top of the back section are component and composite video outputs, an optical digital audio input for external audio sources (such as Sky+), analogue stereo input and an FM radio antenna jack.


The connectivity options don’t end there. Down the side you’ll find a minijack input which lets you hook up MP3 players and other audio devices, plus there’s a very handy USB port which lets you play back content from MP3 players, flash drives and digital cameras without having to burn the files onto disc first.

The HT-X810R’s perceived simplicity is deceptive because it’s actually a cutting-edge piece of kit, boasting a number of unusual features that boost its value factor. We’ve mentioned the wireless sub but equally impressive is its Bluetooth compatibility, which enables you to stream audio wirelessly to the system from a compatible device or listen to audio through a wireless headset. It’s a really nifty function that works flawlessly – we streamed some MP3s from a Sony Ericsson mobile phone and the results were glitch-free and surprisingly pleasant to listen to.


The next surprise is that the system plays DVD-Audio discs, which admittedly still only has niche appeal even after all these years, but for a system at this price the more features the merrier. In fact the system’s format compatibility is excellent all round, as it supports the usual recordable DVD formats (DVD-RW/-R, DVD+RW/+R) and CD-R/-RW, as well as MP3, WMA, DivX, XviD, JPEG and surprisingly WMV, but only up to version 7.

The unit decodes Dolby Digital and DTS, dishes out 300W of power and as ever there’s a range of sound modes on board that supposedly improve the sound for different types of material. V-Sound is the mode charged with filling the void left by the lack of rear speakers, but as opposed to other two-channel soundbars and systems that dazzle us with the science of sound beams and wall reflections, this is more like the basic virtual surround modes you get on a TV.

Operating the HT-X810R is a hassle-free experience. You get one of Samsung’s long, thin remotes, which commits the usual crime of under-sized buttons and cluttering towards the bottom, but otherwise it handles very nicely. The different inputs are clearly marked at the top and the menu controls are ideally placed in the centre. The only thing that isn’t obvious is how to change the output resolution – for that you have to hold down the SD/HD key.


The setup menu and other onscreen displays are cute and colourful, plus it’s much quicker to respond than certain Samsung DVD decks. You can adjust the left/right balance and subwoofer level using dedicated buttons on the remote, and any adjustments you make are displayed on screen as well as on the small readout on the front panel.

The HT-X810’s sound performance is a game of two halves, but we’ll address the good half first. The main unit’s front speakers handle ”The Phantom Menace’s” rambunctious soundtrack with a surprising amount of fluency and control, making for a generally enjoyable listen. Yes at loud volumes it shows signs of strain, tainting the crashes and screaming engines of the podrace sequence with a slightly abrasive edge that you don’t get with more polished systems, but keep things at a sensible level and it can deliver some thrilling moments.


What’s more, dialogue is conveyed with warmth and focus, delicate treble is crisp and perky and the V-Sound mode does a passable job of giving the front soundstage a sense of width and space.


But it’s the other half of the system that causes all the problems. The sub falls into the common budget system trap of blasting out the bass with such wild, undisciplined gusto that it overpowers the other speakers, while the clumsy crossover makes it a rather uneven experience. The bangs and crashes of the podrace and spaceships passing overhead sound hollow and resonant when they should sound deep and punchy – and even with the sub turned down to its lowest setting, its detrimental effects can still be heard.

It’s also the reason why music fails to impress. The double bass licks of Atagiin’s ”What The World Needs Now Is Love” on DVD-Audio sound coarse, while the kick drum of Coldplay’s ”Viva La Vida” on CD is too boomy for its own good. It’s a shame, as the rest of the sound is open and detailed.


As for pictures, the system’s 1080p upscaling isn’t up to the same standards as a good standalone DVD player like the Onkyo DV-SP406 but it’s respectable enough. Shots of the podrace crowd look slightly soft, jaggies compromise the integrity of some edges and detail during dark scenes could be better, but colours are rich and radiant and there’s no block noise to contend with.


We’ve tested several home cinema systems recently but there’s something about the HT-X810R that got us a lot more excited than usual. The no-nonsense installation and terrific looks are a major factor, but what impressed us the most is its unusual feature list – particularly the wireless sub, Bluetooth support, 1080p upscaling and DVD-Audio playback – which at this price makes it feel like extremely good value for money.


It’s a shame that the system couldn’t back it up with similarly impressive performance though, as the unrefined sub and flawed pictures let the side down and prevent it from earning top honours. But systems like this are more about style than substance and even taking its shortcomings into consideration, we reckon it’s still worth checking out.